I’m about four hours into a campaign in tactical RPG Wildermyth and three of my party members are poking around the basement of an abandoned house. Ordinarily, they’d be hacking down mythological beasts or travelling across verdant fantasy landscapes, but in this side quest, they’re looking for a mysterious puzzle box. It’s an ostensibly unremarkable scene, delivered via the game’s unfussy comic book panels like the rest of its story, but this one lands with an emotional heft that catches me off guard. These three characters, Aforn, Nym, and Inneste, have been adventuring together for well over four in-game decades. They’re old—white hair, wrinkled faces, tired eyes—and in this quiet detour they’re tottering about and making cute small talk just as people their age should. I want this moment to last forever; the idea of thrusting them back into battle makes me feel actively shitty.

This is far from the most exciting anecdote I have from my time with Wildermyth. There’s been plenty of the nail-biting victories, crushing defeats, and stirring encounters I’d normally expect from a fantasy RPG involving the fate of the realm. But this was the moment I realised quite how fond of these veteran characters I’d grown. The next time my party is called into the game’s turn-based combat, I change tact nearly without realizing. In my mind, Aforn, Nym, and Inneste are more vulnerable because of their old age. I line them up on the board behind younger members of my party, some of whom are the children of party members who fell in love and got married. What’s remarkable is that this story I’m so invested in, that unfolds grippingly like the fantasy books I read as a kid, is the result of systemic, procedural generation. I’ve never felt this close to characters cooked up by an algorithm before.

Wildermyth starts with a roll of the virtual dice to determine your party’s founding members. Everyone is assigned randomized traits such as “bookish leader” or “compassionate hothead,” alongside one of three classes: warrior, hunter, and mystic. You can edit these characters to whatever aesthetic and statistical minutiae you’re interested in, but I prefer to let the computer do its thing—Wildermyth is a game of procedural generation, after all. The way these generative aspects work is arguably even more ambitious than the procedural efforts of blockbusters such as Watch Dogs: Legion and Middle-earth: Shadow of Mordor. Worldwalker Games, led by Nate and Anne Austin, have authored the possibility for hundreds, possibly thousands of stories to exist at once, somehow fit seamlessly together, and still deliver dramatically. 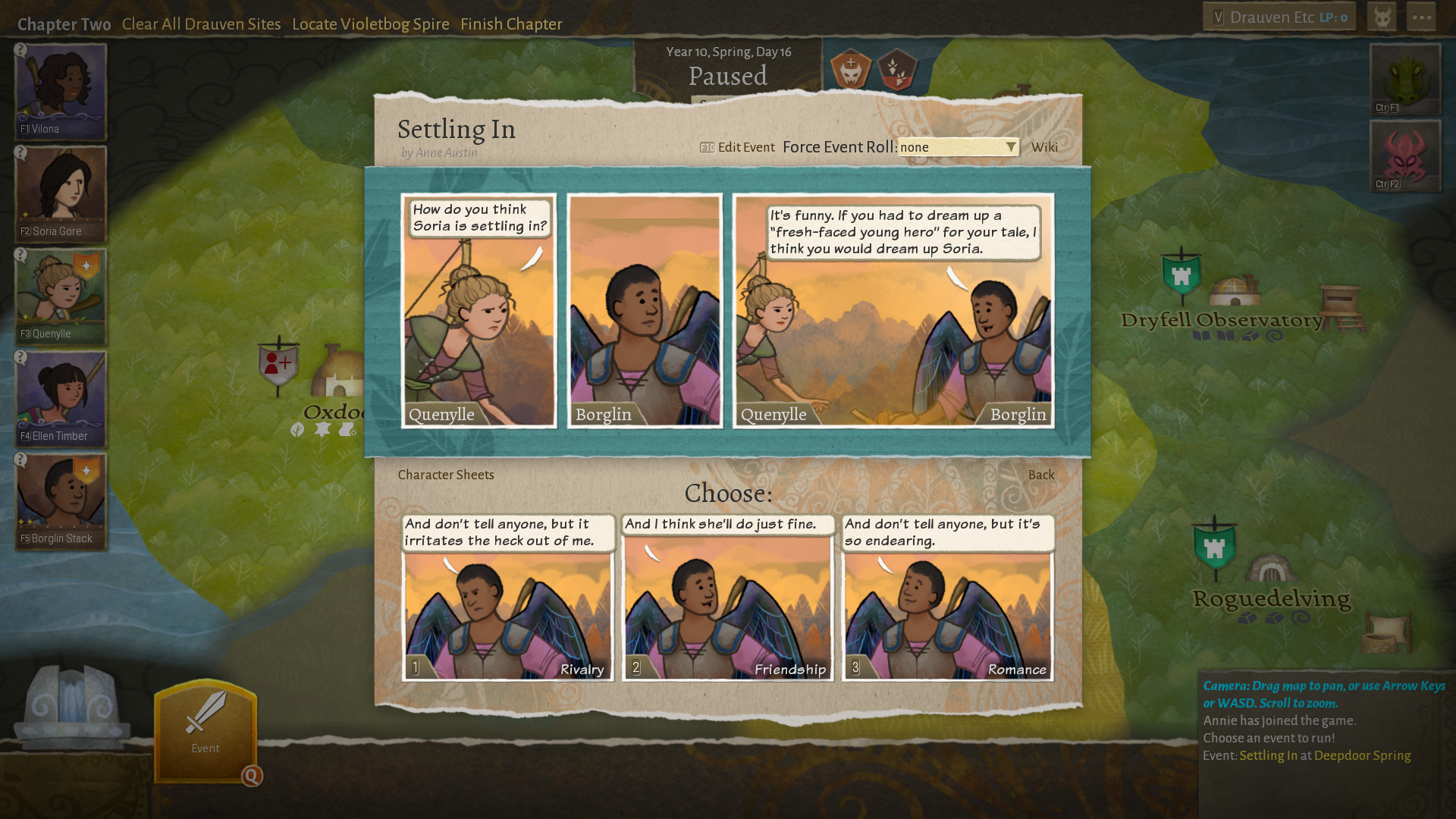 Despite such under-the-hood complexity, Wildermyth is divided up into three simple parts for the player. The first is the overland which is made up of territorial tiles like a tabletop board game. Your characters move from piece to piece to scout areas, battle insurgent foes, and prepare defences. Turn-based fights take place on another gridded board made up of smaller square tiles which your party, rendered as charming 2D picture book cutouts, dodder about as if an unseen human hand is guiding them. Minor UI quibbles aside, the game looks gorgeous here, painterly illustrations and particle effects fusing as striking digital-analogue hybrid. The final piece is the comic book sections through which most of the story is relayed. Taken on their own, each of these constituent elements are solid if unspectacular, but Wildermyth’s beauty lies in how they impact one another—how authored and systemic aspects coalesce in surprising and delightful ways.

Take what happened to Aforn and Inneste, two of my aged party members. They actually found love with one another in their senior years, a story beat I think stemmed from procedural generation. Then, in the culminating battle of a particular chapter, I decided that Aforn, having lived a long and fruitful life, would offer himself up as a sacrifice to a shadowy force known as the Deepists. What followed was a desperate escape from their lair during which Inneste, his wife, fell in battle. When this happens, characters don’t just die; they might escape, albeit potentially losing a limb, or they can go out with one glorious final swing, taking down nearby enemies. She’d lost her husband moments before so I decided on the latter for Inneste, not because this was necessarily the smartest tactical move but because it felt right for her particular story. I’d make the same choice again in a heartbeat.

Life and death decisions can arrive regularly if you don’t move quickly across the board. Enemies steadily grow in number and level up just as you do so that towards the end of chapters, battles are bloody and desperate, reminding me of another tactical RPG with a great sense of escalation, The Banner Saga. Once chapters end, however, a series of screens relay the events of peacetime you’ve just fought so hard for. I’ve had party members spend their days researching the aero-dynamics of axe heads, set up market stalls to sell merchandise, and others who retire gracefully as farmers. 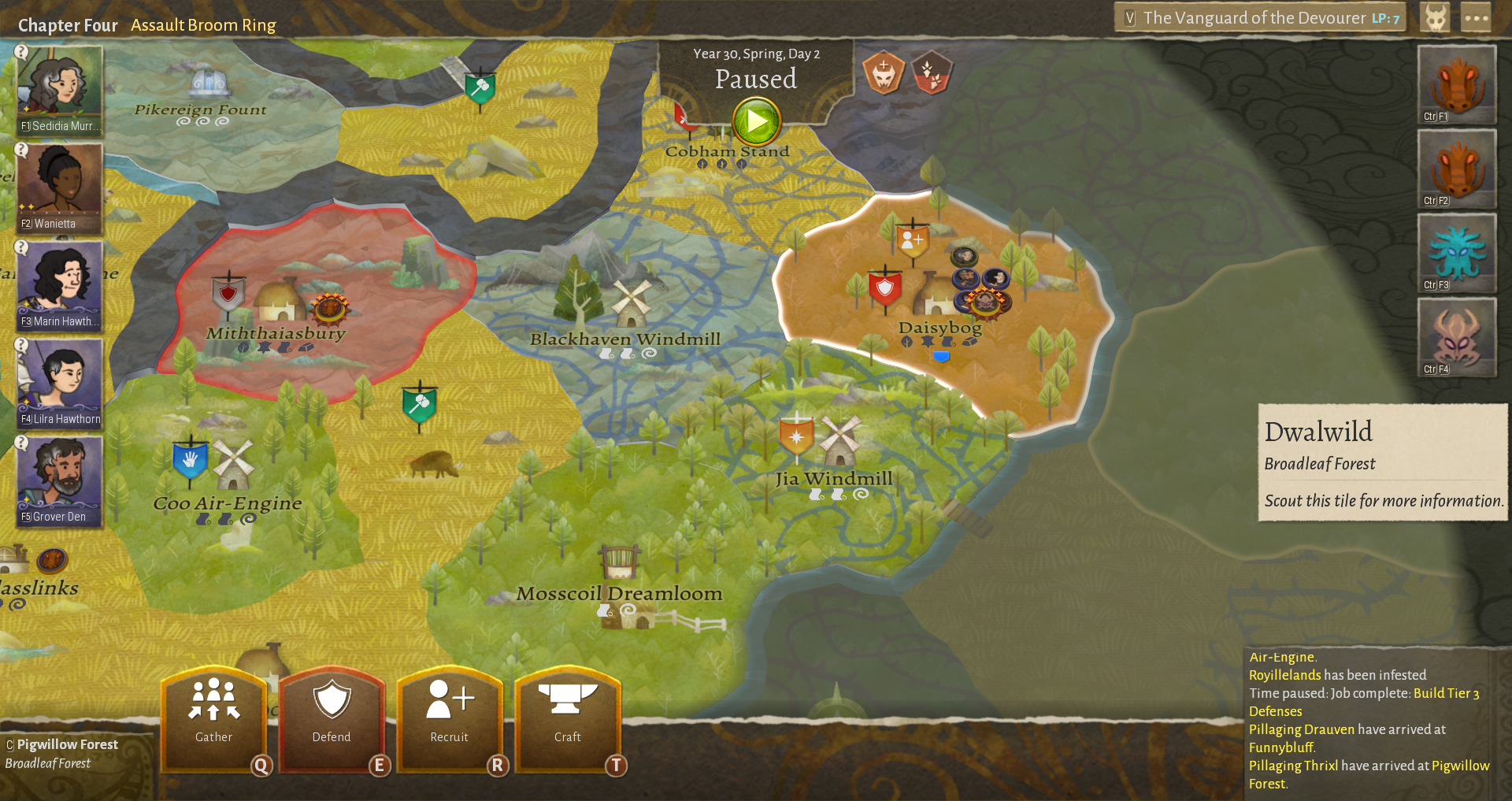 These seemingly small details end up as big payoffs precisely because of the connection Wildermyth fosters between you and its characters. It’s this that elevates the game above other procedural works I love such as Unexplored and 80 Days. In those games, I find myself marvelling at what the algorithmic mechanisms are capable of constructing but here, the computer’s processes fade to the back of my mind. I’m all in on the story itself.

These tales will feel familiar (indeed, you could be forgiven for initially dismissing the game as a generic-looking fantasy RPG!), but this is a deliberate and important aspect of the way Wildermyth  functions. Tropes structure the game’s procedural generation—they give it form and shape. There’s always a foe to best as well as a host of side quests involving forest spirits, ghosts, and possessed animals, staples of fantasy genre fiction remixed by the game on the fly. However, that’s not to say there aren’t surprises: at one stage my goal shifted to thwarting a cultish group that preyed on vulnerable minds. I stopped fruitlessly bludgeoning the enemy into submission and started to strengthen infrastructure like bridges and mountain passes so that citizens could better resist them collectively. All of a sudden, I was playing a fantasy RPG about the less tropey virtues of community building.

What’s wonderful about Wildermyth is how it bends procedural generation towards intimate, cozy ends (as opposed to the labyrinth, computer-generated levels of roguelikes Hades and Dead Cells). In this way, its systemic narrative style reminds me of oral storytelling, a tradition in which the broad shape of a narrative can remain the same but details change from teller to teller. In Wildermyth, this is simply what the code does, albeit at an accelerated mechanical rate. Oral storytelling continues to be practised around the world but the act also ties us back to ancestors who would have huddled around fires in settings that resemble the game’s. In this context, stories are a shelter or a refuge, which is exactly how playing Wildermyth feels in our own fraught and scary world. It’s a game of classic sagas told in utterly modern fashion only now, rather than staring into flames as we listen, our faces are lit up by the glow of the computer screen.