Who Is The Main The Batman Villain? The Riddler Explained 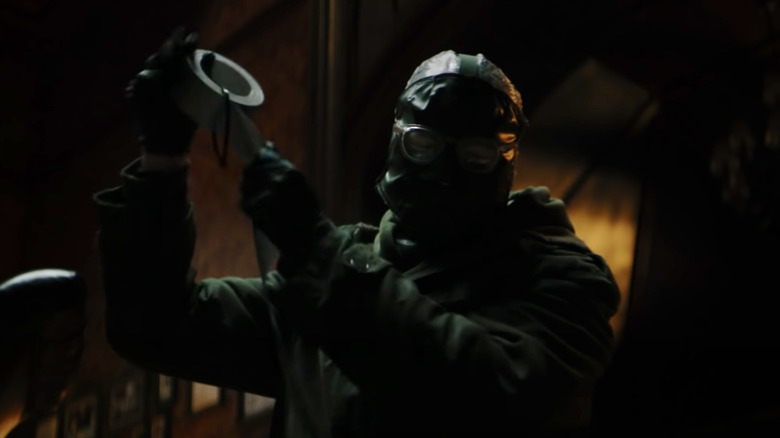 The Riddler is one of the most famous supervillains in Batman's rogues gallery, but his last live-action movie appearance was in 1995 with "Batman Forever." In the 2020s, we're about as far removed from Jim Carrey's portrayal in that movie as it was from Frank Gorshin's cackling portrayal in the '60s "Batman" movie and TV series. There's a whole generation of filmgoers who haven't met their Riddler yet.

Paul Dano will rectify that next year in "The Batman," when he brings to life a new version of the Riddler for audiences. Judging by the first teaser trailer for "The Batman," which debuted during the DC FanDome event in 2020, this will be a very different Riddler from the one we've seen onscreen before. Yet we also know that certain comic book stories have inspired writer-director Matt Reeves and he's said that those all inform "The Batman" by "osmosis."

If you're not familiar with the character's comics history, or if his radically different appearance in that teaser just left you puzzling — in true Riddler fashion — about the direction Reeves is taking him, here's what you need to know about the Riddler. 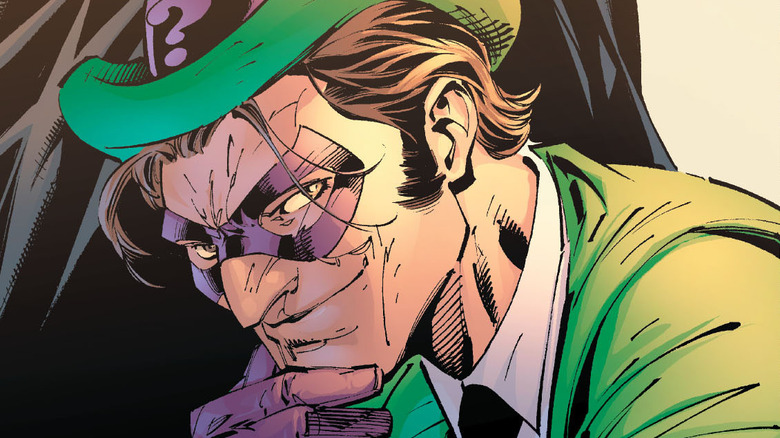 The Riddler first appeared all the way back in 1948 in Detective Comics #140, written by Bill Finger and pencilled by Dick Sprang. The cover depicts him in a green leotard, emblazoned with question marks, similar to how he would look in "Batman Forever." In the issue, we learn a bit of his backstory: how he formed a fascination with puzzles at an early age and was not above cheating to solve them. Later in life, while working at a carnival, he decided to become a criminal and engage in a duel of wits with Batman and the police. Among other things, he sent them some giant, truck-size pieces for a puzzle the size of a football field.

Over the years, the Riddler has also gone by the last name of Nashton or Nygma, but his original name in the comics was Edward Nigma, an obvious play on the word "enigma." Reeves has cited the 13-issue miniseries, "Batman: The Long Halloween," and its sequel, "Batman: Dark Victory," as influences on "The Batman," and the Riddler does appear in both of those stories. However he takes on a more prominent role in the 6-issue sidequel, "Catwoman: When in Rome," which comes from the same creative team, Jeph Loeb and Tim Sale.

"When in Rome" saw the Riddler, or "Eddie," accompany Catwoman overseas, seemingly as a friend; but by the end, she would realize that he had been manipulating her all along in an attempt to learn Batman's secret identity. The story had him teaming up with Scarecrow and Cheetah, two villains we saw in "Batman Begins" and "Wonder Woman 1984," respectively. In "The Batman," Zoe Kravitz plays Selina Kyle / Catwoman. 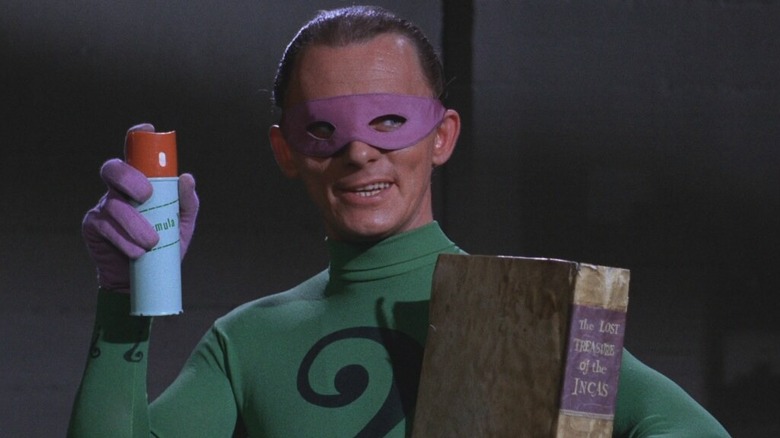 DC Comics published "When in Rome" the year after "Hush," which paired Loeb with superstar artist Jim Lee and which remains one of the most famous Riddler stories. In this one, the Riddler actually does figure out Batman's secret identity after using Ra's al Ghul's mystical, rejuvenating Lazarus Pit to heal himself of cancer. He serves as the mastermind who controls all the other villains in the story, including the Joker. He even has Clayface impersonate the second Robin, Jason Todd, in order to play mind games with Batman.

It's only by threatening to expose him to the League of Assassins and leveraging the value of a riddle with an answer that no one else knows that Batman is able to keep his civilian identity secret. The Riddler would later lose his memory in the comics so that he retained no knowledge of Bruce Wayne being Batman.

Frank Gorshin's Riddler was the very first villain that Adam West's Batman fought in the '60s "Batman" TV series. The series kicked off with "Hi Diddle Riddle," the first episode in a Riddler-centric two-parter. Gorshin had a background as a comedian and impressionist and he played the villain with such glee that there are times when he almost out-Jokers Cesar Romero's Joker. This is nowhere more evident than in the 1966 "Batman" movie when they get into a short laugh-off aboard the Penguin's submarine.

Jim Carrey also brought an over-the-top energy to his version of the Riddler in "Batman Forever." This Riddler prances around with an orange flattop and gold cane, thrusting his pelvis at the screen, spouting cringe-worthy one-liners like "Joy-gasm!" and just generally acting like Ace Ventura. Is it any wonder that Carrey famously annoyed his gruff co-star, Tommy Lee Jones?

From Jim Carrey To Paul Dano 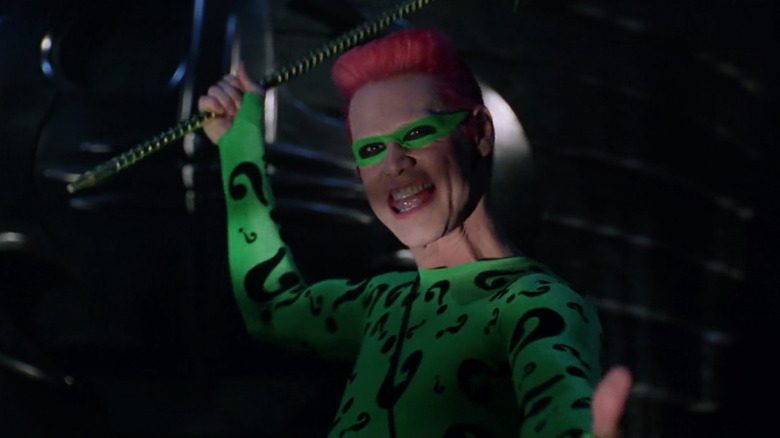 There's a mania to Carrey's performance as the Riddler, and to his credit, he does manage to blow up the Batcave after discovering that Bruce Wayne is Batman (it's becoming a pattern). He starts out as a Wayne Enterprises employee, and that's a role the Riddler has filled in DC's "New 52" comics continuity, too. However, as much as "Batman Forever" focuses on Riddler — powering him up on other people's brainwaves and having him ascend a literal throne — the movie has not aged well.

Though we did see Cory Michael Smith portray Edward Nygma as a forensic scientist on the Fox TV series, "Gotham," it feels like we've never seen the Riddler taken too seriously and depicted as a really formidable foe onscreen before. Paul Dano might change that in "The Batman."

The aforementioned teaser for "The Batman" appears to show the Riddler in a goggled mask, duct-taping a man to death. He graffitis the man's head and newspaper headlines with the word "Lies," leaves Batman greeting cards with enigmatic clues, and seems to have a vendetta against corrupt Gotham City officials. In our breakdown of the teaser, we dissected it for more details, noting all the clues in it, much like Batman himself would do with one of the Riddler's riddles.

Suffice it to say, this Riddler almost has a "Zodiac" vibe à la David Fincher. If Reeves is drawing from "The Long Halloween," it's possible his Riddler will take on a role comparable to the Holiday killer in that story. One thing's for sure: Dano is a fine dramatic actor, capable of going toe-to-toe with the likes of Daniel Day-Lewis in "There Will Be Blood." Whatever shape his Riddler ends up taking, you probably won't hear him quipping, "Joy-gasm!"

Read this next: The 15 Best Batman Comics You Need To Read

The post Who Is The Main The Batman Villain? The Riddler Explained appeared first on /Film.