What We’re Writing--Hank in the Middle

by admin July 2, 2020
HANK PHILLIPPI RYAN:  I’ve been here before, Reds and readers, I have been here 12 times. The first time I had no idea what I was getting in for, and simply powered ahead, blithely a newbie, having no idea how difficult it was to write a book.
By book two, I realized the middle of the manuscript was a morass of hideous quicksand, an impossible journey, a slog, a step-by-step, inch by inch, crawl through the unknown.
You know by now that I do not outline, as much as, every single time, I wish I was adult enough to do so. But I do not know what happens next to my books, not until the next sentence and the next chapter in the next paragraph.
When I am finished, somehow my brain has Rubik's cubed all the puzzle pieces and put them into a coherent and even, sometimes, entertaining order, and it’s all fine. But sisters, along the way, it is very difficult.
I try to look at it  as 1000 words at a time. I say the mantra: just keep going just keep going just keep going.
And I heard a wonderful author last night say that the key was to write without fear. I was so touched by that! It’s very easy, during a first draft, to criticize yourself at every decision. Every word. Thinking – – as I do so often – – this is absolutely terrible! I don’t even know what a sentence is, I don’t even know what a word is! How did I even ever do this before? And then I try to laugh, because I know this is what happens every time. 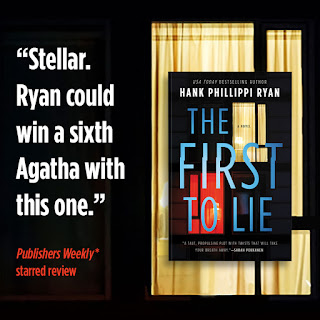 You know my upcoming book, THE FIRST TO LIE, just got a star from Publishers Weekly. (Whoo hoo!)  Well, I will confess, only to you, that there were many days, and I mean many, where I thought this book just isn’t going to work. It doesn’t make any sense, I don’t have it, it’s bad bad bad, maybe I should just give up. But of course, I couldn’t, because everyone at the publisher was waiting for it.
I also keep a writing journal, just a couple of lines every day.  I  am gratified and embarrassed to say that every journal, 13 in a row, start the same way:  "Day one. I have no idea."
And somehow, something happens and then something else happens and then something else happens. And then I got the PW star.
(So I was wrong. But! Now I fear that’s the last time that’s going to happen.)
The other things that seem to recur at the stage is that I write a lot of things that I know will be cut. And that is kind of powerful. Even reassuring. Sometimes it is just me looking for the story, and I know it will get deleted. It will have been instructive to me, but not necessary to the book.
I have a problematic character in the book that's coming next. She is a 1999 college girl, smitten with her professor. Yes, I know this is inappropriate, but in 1999, a certain kind of  18-year-old might’ve felt that way, mightn't she? The same way she’d have had a crush on a rock star, or a movie star, or some other fantasy. She’s not exactly self-actualized, let me say that off the bat.
So, her personality evolves. Here’s a little bit of what she's like right now. Don’t hold me to this! It will be fascinating, I hope, to see how this changes in a month or two, to see how Cassie behaves and what she decides.
At the beginning of the book, which takes place 20 years after this scene, Cassie is gone. Vanished. Missing. Where did she go? (And of course I have no idea.)
But here’s a tiny bit of the Cassie that exists in the first draft of the first draft of the first draft.
HANK'S WIP Chapter 10

Cassie couldn’t wait. She would see him in fifteen minutes. She felt the warm mid-morning sun wrap her in its October glow as she hurried up the cobblestone walk to Wharton Hall, a classically imposing gray stone behemoth at the edge of Berwick Green. Okay, so like, she was wrong, she’d been wrong that college was going to suck. Her mom had insisted it’d be wonderful, that night before leaving for school. But Cassie—and she had to admit she carried a dark lump of embarrassment inside her about it about it now--had thrown a huge fit in her bedroom, and refused to leave home. She’d even picked up two corners of her new black suitcase, tipped everything out onto her pink and white bedspread, and slammed the empty thing closed.
Pooch had yelped, barking, thinking he needed to protect her. When Cassie was angry, Pooch got scared. Smart dog.
“Come ‘ere, Pooch,” Mom patted her knee, quieting him, but stayed, posture ballerina-elegant as always, in the hunter green chair in the corner, her gray-edged hair twisted into a messy bun. Pooch whuffled into mom’s knee, traitor that he was. Stupid dog.
“Cass, honey, is there something you’re trying to tell me?” Mom’s voice had that quiet edge she used when she was trying to stay calm.
But she didn’t have to be so sarcastic about it. Yeah, there was something she was more than trying to say. She was saying it.
“I can get a job,” Cassie had insisted. She’d also seen Lily trying to hide outside her bedroom door, as if Cassie didn’t know she was eavesdropping like crazy, like she always did, on everything Cassie did and said and planned, and that made her even angrier. Lily, what a complete dork, and totally got all the attention because she was younger and needier and missed her father so deeply much. As if Cassie didn’t miss him, too. In a way.
“I don’t need stupid college. I can be a model, everyone says so, and that’ll be easy and awesome.  I’ll be like the new face of Y2K. Or—something.” So maybe that was overreaching. But she’d plowed ahead, concocting her plans as she said the words out loud. “I’ll, like, take the bus to New York and find an apartment, and—send you all the money.”  She’d paused, watching her mom’s face. Gauging to see whether she was buying into this scenario.
“Whenever you’re finished,” her mom had a fake little smile pasted on her face, a smile that meant whatever, “you can pack these things back up and we’ll finish loading the car.”
They’d glared at each other,  a standoff, Cassie in cut offs and a plaid flannel, her mom in jeans and one of Dad’s old shirts, which always made Cassie sad. She didn’t understand why mom would insist on wearing dad’s clothes.  It was hard enough that he was gone without having to see his stuff all the time. Mom should have gotten rid of it, long ago. Started totally over.
Memories were toxic, Cassie knew. You could learn lessons from the past, and she did, but then hoarding all those bygones would only make your brain more crowded.  Memories were sadness, and regret, and replaying bad things. She’d become a trained  surgeon with her own memories, removing everything she didn’t need. Tossing it.
“Can I have her room?” Lily had edged into the doorway, wearing dumb sneakers about fifty times bigger than her feet.
“Shut up,” Cassie said. As if everything wasn’t upended enough. Ended enough. Her dad would never have let this happen. But how did it happen? When did she change? Like, overnight? All though senior year she’d craved going to college. On her own, meeting real people, smarter people, no curfews, no rules, no “take your sister with you.”  She’d have her own place. Sort of, with a roommate, but still.  But now, all that new seemed—too much. Too much new at once. “Mom? Tell her to get out of here.”
“Cassandra.  Blair. Atwood.”  Her mom stood, planted her hands of her hips. Pooch’s tail whap-whap-whapped against the blue chair. “You apologize to your sister. Now. And then pack.”
“Screw you,” Cassie said.
“I’ll pretend I didn’t hear that,” her mom had said, her voice super-quiet.
“Cassie?”
Cassie flinched as her name startled her back to the real world. Or present time, at least. October. Berwick University. The Green. Ten in the morning. Two girls, one in a BU t-shirt, the other wearing a flannel shirt just like Cassie’s. She wasn’t sure of their names, but they were probably in her dorm.
“Hey,” she said, pretending. She’d figure their names out soon enough. If it mattered. Now she needed to get to class. She'd see him in ten minutes.
HANK: If you're still with me, thank you! And you should know the main character of this book is Lily, the little sister.
Do you dislike Cassie too much?
Let me know! And now, back to writing.  Only fifty thousand words to go.
Back to Feed
Use left/right arrows to navigate the slideshow or swipe left/right if using a mobile device