What Makes Us Human? How Minds Develop Through Social Interactions 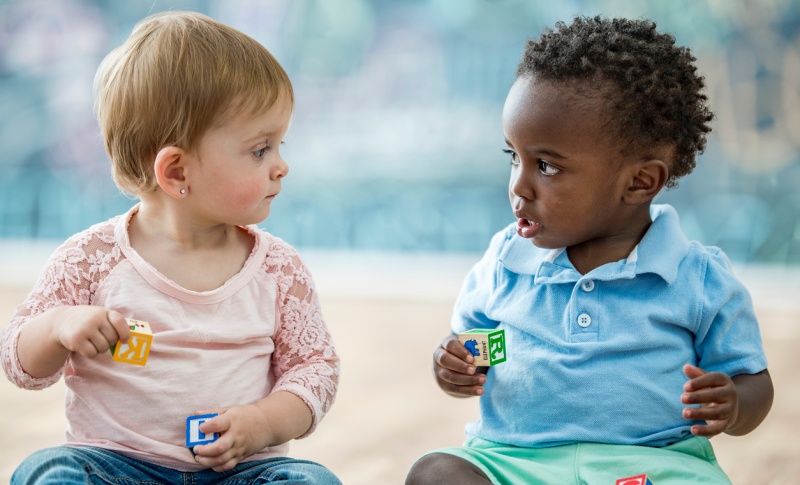 Just how social we are as a species is made even more evident by the COVID-19 lockdowns that have restricted our everyday social interactions and affected our physical and mental health. Social engagement influences us at an even more fundamental level because it is crucial to the formation of human thinking and minds. We address this issue in What Makes Us Human? How Minds Develop Through Social Interactions. In the words of a 9-year-old, the question is, “How do you go from a bunch of cells to something that thinks?” How are we as humans able to explore such questions about our own origins and the workings of our minds? Humans are intrigued by the possibility of intelligent life elsewhere in the universe, but a puzzle unfolding right before our eyes is how intelligence develops in our homes as babies start to communicate and then understand the world in ways that adults simply take for granted.

In our book, we develop and justify the idea that the essential aspects of being human arise through our relations with other people. To understand these processes and the way human intellect develops, it is essential to look closely at the nature of communication in infancy and childhood, with which much of our thinking is intricately entwined. To explore the complexities of human language, we begin by describing the rich social and emotional niches in which human babies develop and the forms of interaction on which communication is based emerge.

Have you ever considered why human infants are born so helpless that they must be cared for over many years, yet they develop such powerful ways of thinking? Our answer to this question follows a historical tradition that suggests that this helplessness is an important factor in the development of human thinking. This is because the need for constant care in the early years necessarily produces a social context in which complex human skills develop. Although the infant is unable to fend for herself, she is born with a host of evolved biological characteristics that draw her into engagement with others.

For example, typically developing babies are interested in looking at human eyes, which are particularly striking compared to the eyes of other primates because the dark center is surrounded by contrasting white sclera. Such attentiveness to eyes may be interpreted as indicating babies’ apparent interest in other people, and this interest is typically reciprocated by parents, who love to engage with their infants. This bidirectional process of attentiveness promotes the infant’s development. Initially, this consists of staring into the eyes of a caregiver, or cuddling into the caregiver for comfort, but these early and simple skills soon develop into more complex abilities like smiling or cooing. These new forms of interaction elicit even more positive experiences because they are so rewarding for parents. This repeated daily social interaction between infants and their parents becomes increasingly coordinated, which reflects early forms of communication. For instance, when a baby reaches her arms toward her parent, the meaning of this action — a desire to be held — is clear to the parent, who typically picks up the baby. Through experiencing this response to her reaching, the baby learns to anticipate this outcome of her reaching action. That is, she comes to grasp the meaning that her action has for others and then she gradually learns to communicate this desire intentionally. This is a crucial change in ways of interacting, not seen to such an extent in other species that lack an extended period of helplessness: The baby becomes aware of the meaning in the interaction and can then anticipate the response and communicate intentionally. Later, she can learn to add words such as up or uppy to these sorts of shared social routines.

Other acts, such as mutually sharing a toy with a caregiver or gesturing in a specific way, develop in a similar fashion as their meaning emerges within shared patterns of interaction. Beginning at about 10 to 12 months, babies typically start to point, but not in a sophisticated way. It takes a lot of experience to realize that successful pointing involves the pointer gesturing to the object and checking that the receiver is following the line of the point. It also requires the receiver to identify what is being pointed to and why their attention is being drawn to it. The hard-won reading of these sorts of gestures reveals the origins and nature of children’s understanding of other people. It shows how a grasp of simple experiences like reaching to be picked up facilitates further interaction in which children develop yet more complex communicative and social skills.

These are concrete examples of how increasingly sophisticated human thinking and minds emerge as communication develops in everyday interaction, a fact that makes their significance easy to overlook. They are instances of the sort of mundane interactions on which human ways of being and thinking are based. The use of words is an extension of earlier communication with gestures. Language gradually becomes part of the way thinking can take place. Initially, the baby’s words refer to objects and actions in the here and now, but gradually they can be applied to experiences not directly perceptible – for example, toddlers can relate what happened at preschool or make up a story about an imaginary character.

More sophisticated forms of social understanding emerge when children gradually master the language skills needed to talk about human activity in psychological terms. Most toddlers articulate what they want with words by age two, and soon afterwards use words like think and know to show that they are aware that they and the people around them are influenced by their own thoughts and motivations. By acquiring the ability to talk about the psychological world, children can begin to reflect on themselves and others in these ways.

From the perspective we have developed here, morality emerges at the level of interaction as children learn to coordinate their daily activities with others in relationships of mutual affection and respect. These interactions based on equality are well suited for reaching mutual understanding because they require children to listen to others and explain themselves. This allows them to coordinate conflicts and develop a practical morality in their interaction with equals. A further step is to begin to articulate what was first implicit in their activity, which then makes reflection possible. In this way, children become able to articulate and reflect on their initially practical ways of interacting with others. Moral notions such as fairness and justice do not have their source in biology alone, nor are they pre-existing and passed on from a previous generation to be imposed on children. Instead, they arise through particular forms of cooperative interaction among equals based on mutual affection and respect.

Of course, explaining the origins of human thinking is controversial and not everyone will agree with our account. In our book, we compare our developmental account, which is grounded in the processes of social interaction, with two competing explanations for human thinking: that it is either simply determined by biology or that the computer makes a good metaphor for the human mind. First, we show that although biological factors are crucial in structuring the developmental system in which human skills emerge, the claim that thinking is determined by genes is incompatible with work in biology over the last 50 years. Research in genetics and developmental neurobiology highlights that we must consider the complex developmental system in which multiple levels of biology and environment interact with each other to drive the individual’s development. Key aspects of human thinking, although based on neural activity, emerge only at the level of the person interacting with others.

Second, the claim that thinking can be likened to computation is based on a flawed assumption that meaning is fixed, as it is in a computer. Instead, as we illustrate, human communication is rooted in shared ways of interacting. This is also why current approaches to artificial intelligence that attempt to model human intelligence are based on the wrong foundation. Revealing the flaws in these two general approaches to human psychological development supports our argument that human communication and thinking emerges within interaction with others in a developmental system in which biological and social levels are thoroughly interwoven. We trace this development by beginning as gestures emerge in early interaction, leading to language and then to human forms of thinking.

This post was previously published on Child & Family Blog.

The post What Makes Us Human? How Minds Develop Through Social Interactions appeared first on The Good Men Project.