Theme:  The unifier captures it perfectly, so let's go with it:

61. MLB rally killers, briefly, and a hint to what's in the four longest puzzle answers: DPS.  In baseball, a Double Play occurs when the defenders are able to make two OUTS on one hit ball.  This can occur in a variety of ways, but the most common is when a runner on first base is forced out at second, and the batter is also out at first base to complete the play.

As we shall soon see, each theme entry also contains two OUTs.

21 A. Ring result: BOUT OUTCOME.  For reasons that are unlikely to appear any time soon, the square stage where a boxing match is fought is call a ring.  This event is called a BOUT.  One boxer usually losses while the other wins.  Occasionally there is a draw.  Either way, that result is the OUTCOME. What sneakily is concealed there is a pair of OUTs.

32 A. Unlicensed rainbow catcher: TROUT OUTLAW.  You need a fishing license to catch fish.  Otherwise you can become this fill.  The clue is a clever misdirect, but the answer is contrived, and you're highly unlikely to ever encounter that phrase again.

41. Camporee, for instance: SCOUT OUTING. A camporee is a local or regional gathering of Scouting units for a period of camping and common activities. In my Boy Scout years, we always had a two week stint at camp Miakona in the summer.  There were other troops there, but I don't recall a lot of common activities; so I'm not sure if that counts.  Maybe we were on the OUTS with them.  We did do some tent camping, though, throughout the year.

53. Tap water: SPOUT OUTPUT.  This is self-explanatory, but again contrived - though accurate.  That is where the water comes OUT OUT from.

Hi, Gang, JAzzBumpa here, not OUT somewhere else.  Contrivances aside, I'm rather in awe of this theme, where each two word entry has OUT as the end of the first word and again as the beginning of the second.  And with the playoffs beginning and the end of the season drawing near, a baseball-related theme is welcome.  Watch for many DPs in these games.  And let's see what's ahead in this puzzle.

5. Word with ship or school: YARD.  One for work and the other for play.

14. Largely phased-out ersatz fat brand: OLEAN.  The brand name for olestra, an indigestible artificial complex fat.  It was phased out due to unpleasant digestive issues - unpleasant unexpected side effects.   Also the name of a city in New York

16. Org. for fur foes: PETA. People for the Ethical Treatment of Animals.  An animal rights organization founded in Norfolk, Virginia in1980 and led by Ingrid Newkirk,

17. Envelope-directing abbr.: ATTN.  To the attention of the intended recipient.

18. "Out of Africa" setting: KENYA.  A democratic republic on the east coast of Africa.

20. Three at the start: TRI-.  A prefix indicating three of something.

36. Floral accessory: LEI.  From the islands

37. Urges: YENS.  I thought about going to Japan, but didn't have the YEN to travel.

45. Former California speedway that was the site of a 1969 rock concert: ALTAMONT.  The event in December, 1969, only a few months after Woodstock, was a violent disaster, with 4 deaths, scores of injuries, and multiple car thefts.

49. Evening parties: SOIREES.  From The French word for evening.

65. Elizabeth of "La Bamba": PENA.   Elizabeth Maria Peña {1959 – 2014] was an American actress, writer and musician. She won the 1996 Independent Spirit Award for Best Supporting Female and a Bravo Award for Outstanding Actress in a Feature Film for her role in Lone Star.

1. Lakeside rentals: BOATS.  I was thinking cottages - which don't fit - but, OK

4. Cleeves who wrote Shetland Island mysteries: ANN.  [b 1954] She studied English at the University of Sussex but dropped out and then took up various jobs including cook at the Fair Isle bird observatory, auxiliary coastguard, probation officer, library outreach worker and child care officer before winning  the Duncan Lawrie Dagger for her novel Raven Black.  Some people just can't keep a job.

5. Bed-ins for Peace participant: YOKO ONO.  [b 1933] She is a Japanese multimedia artist, singer, songwriter and peace activist. She was married to English singer-songwriter John Lennon of the Beatles from 1969 until his murder in 1980. With their performance Bed-Ins for Peace in Amsterdam and Montreal in 1969, Ono and Lennon used their honeymoon at the Hilton Amsterdam as a stage for public protests against the Vietnam War.

6. Native Alaskan: ALEUT.  I had Inuit.  But, no.  These are the natives of the Aleutian Islands.

9. Lynn portrayer in "Coal Miner's Daughter": SPACEK.  [b 1949] Mary Elizabeth "Sissy" Spacek is an American actress and singer. She is the recipient of numerous accolades, including an Academy Award, three Golden Globe Awards, a Screen Actors Guild Award, and nominations for four British Academy Film Awards, three Primetime Emmy Awards, and a Grammy Award. Spacek was honored with a star on the Hollywood Walk of Fame in 2011.

21. Reputation stain: BLOT.   Often the result of a scandal.

24. __ ex machina: DEUS.  God from a Machine.   A plot device whereby a seemingly unsolvable problem in a story is suddenly and abruptly resolved by an unexpected and unlikely occurrence.   The term was coined from the conventions of ancient Greek theater, where actors who were playing gods were brought onto stage using a machine - either a crane from above or a trap door from below.


27. Peacock's gait: STRUT.  To walk with a vain, pompous bearing, as with head erect and chest thrown out, as if expecting to impress observers

28. Scheme: PLOT.  A plan made in secret by a group of people to do something, often illegal or harmful.

39. Sirius, e.g.: STAR.  The brightest star in the night sky. Its name is derived from the Greek word Σείριος (Seirios, lit. 'glowing' or 'scorching'). The star is designated  Alpha Canis Majoris, with a visual apparent magnitude of −1.46

42. Pupa protector: COCOON.  A silky case spun by the larvae of many insects for protection in the pupal stage.

43. 2020 candidate Beto: O'ROURKE.  Robert Francis "Beto" O'Rourke [b 1972] is an American politician who represented Texas's 16th congressional district in the United States House of Representatives from 2013 to 2019. O'Rourke is best known for his 2018 campaign for U.S. Senate, which he lost to Republican incumbent Ted Cruz.

50. Fodder for a Fire, say: E-BOOK.  Fire being an E-reader.  Nice misdirection.

51. Food recall cause: E COLI.  A bacterium that does not belong in your food.

53. Send using 52-Down: SHIP.  Transport an item from one location to another.

54. Finish, as a road: PAVE. Complete the construction of a roadway, generally with concrete or asphalt.

55. Algerian seaport: ORAN.  A major coastal city located in the north-west of Algeria. It is considered the second most important city of Algeria after the capital Algiers, due to its population, commercial, industrial, and cultural importance.

57. Digital recorder: TIVO.  Made by a corporation of the same name.
That wraps up another Wednesday.  Hope you made OUT OK.
Till next time, JzB, over and OUT! 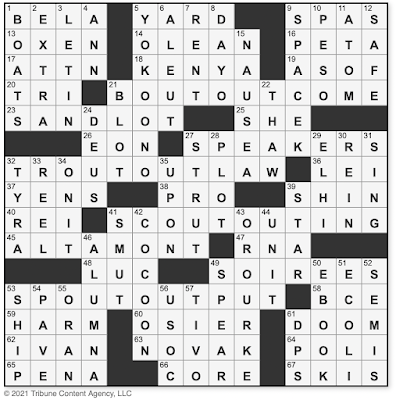