TO BE HIS -- GATEWAY RANCH SERIES

Don't forget the Rafflecopter at the end of the post!

Nestled within the hills of central Texas is a special ranch. A place that defies the laws of physics—that of time, space, and dimensions. It’s a place where normal morphs with the paranormal and supernatural. A place that seems to know what a person’s true desires and needs are, and then allows the right circumstances to occur to fulfill those wishes.Welcome to the Gateway Ranch.Your gateway to all things possible…

Book interview for To Be His by CR Moss

What’s the inspiration for the book/series?

~ The inspiration for the Gateway Ranch series stemmed from a trip Jo & I went on where we stayed on a working ranch. There were ranchers/cowboys, horses, trail rides, campfires, cattle, and food cooked outside. Our muses started asking, "What if?" When we returned home with a handful of ideas, we went to Austyn and said, "Guess what we're going to write about." From there we started brainstorming and writing stories. Granted, that took place a decade ago and the stories and series have morphed since then. My first book, To Be Yours, had been previously published under the title Wild West Weekend, but I explained the changes in a letter in the book and why it’s more like new than old. To Be His had also been previously published as, Keep You Safe, for a short time in a multi-author anthology, but as I did with the first book, I reworked TBH to fit the Gateway Ranch world. Austyn Sherrie, Johanna Riley, and I also made the ranch have a supernatural aspect to it so we could add our own spins to our own stories that take place at the GR. More information can be found here: https://threeflamespublishing.com/books/gateway-ranch-series/

What was your favorite scene to write? Why?

~ I liked the scene where Ariana first sees Gavin. She’s totally shocked and gets frazzled but can’t do anything about it.

Give us an interesting and fun fact about your book and/or its characters.

~ Both my heroine and I are artists.

Do you have more books planned for this series?

~ Yes! My next book, To Be Mine, will be another republish of a story I’d written ages ago. I’m taking out the northeast references and setting it in the Gateway world. TBM will be another Contemporary Romantic Suspense. After that, I’ll put out two time travels and some chick lit stories set in the ranch world. One of the time travels will be a revamp of a previously published story called Wild West Hauntings and be like new. Lots to look forward to in this series!

Nestled within the hills of central Texas is a special ranch. A place that defies the laws of physics—that of time, space, and dimensions. It’s a place where normal morphs with the paranormal and supernatural. A place that seems to know what a person’s true desires and needs are, and then allows the right circumstances to occur to fulfill those wishes.Welcome to the Gateway Ranch.Your gateway to all things possible… 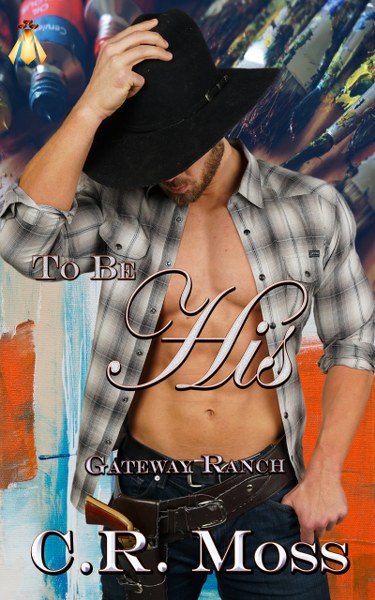 To Be His
A Gateway Ranch Story
by
C.R. Moss
Genre: Romantic Suspense

I’m Professor Arianna Perez, and I’ve been asked if I’ll ever trust, let alone love, another man again. After dumping an abusive boyfriend, I doubted I would. At least, that’s how I felt until fate had sexy wrangler, Gavin Bishop, reappearing in my life in a way I never expected.
Against my better judgement, I fell hard for the cowboy, believing everything he said, including how he wanted to treat me like a queen and keep me safe. Little did I know, though, that the circumstances that brought us together could also tear us apart…
And possibly claim my life.

As Gavin made sure they were secured behind the gates with plenty of water and some hay and feed, I strolled down the center walkway. Two horses had been left behind from the morning’s rides, but they didn’t seem too upset. I cooed at them as I passed by. When I arrived at the end, I peeked down the left row and the right one, taking in all the tack and saddles hanging on the wall and lining the workbenches on either side of a few doorways.

“Yes, just being nosy,” I replied and turned to head back over to Gavin, who happened to be leaning up against one of the empty stalls next to the horse, Ebony, I’d ridden. He’d hooked his thumbs into the belt loops of his jeans and had one booted foot up against the door. The tilt of his head and hat cast shadows, nicely shading the angles and planes of his face. Dust from the trail coated his boots and some of his clothes.

The artist in me wished I’d brought sketching materials along so I could capture the moment. Or better yet have kept my phone on me. I could have snapped a picture and then painted him later in the privacy of my own space where I could let my fantasies flow free.

A slight movement on his part revealed his eyes. The intense, direct stare of his gaze made me question my decision to roam the building. Unsure of the nearby exits, I glanced away from him and closed my eyes.

I had to fight the panic sprouting within me. Ever since childhood, when my friends and I almost couldn’t escape a theater during an emergency, not knowing escape routes tended to give me anxiety. Chad hadn’t helped either. When his treatment grew rougher, I always tried to make sure I had a way to leave. Not knowing if a doorway leading to the outside was behind me or not made me antsy.

Gavin’s not that lying cheater Chad. Gavin wouldn’t hurt me.

But did I really know that for sure?

Slowly, I turned my head and opened my eyes. An empty stall containing what looked to be fresh hay sitting in a pile in the back corner caught my attention. The ground appeared to have been cleaned.
Fighting the urge to run, I looked back at him.

His gaze had grown passionate, and his lips had curled into a rakish smile.

Any hints of anxiety were swept away due to the sensual magnetism pulsating between us, and all my thoughts fled. Save for one.

What would it be like to have a roll in the hay? 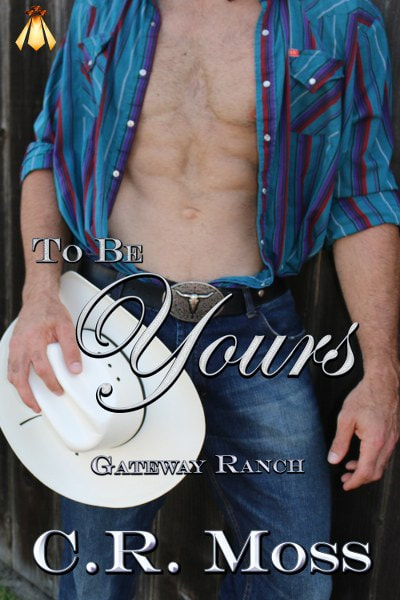 To Be Yours
Gateway Ranch Series

Katrina Foster has survived a life no one dreams about and most don’t want to know about. Escaping to a ranch in Texas she used to visit during the summers of her childhood and rekindling an old relationship with Dakota Remington, she hopes to leave the nightmare of her past behind her. At first, all seems well, but when strange things begin to happen, she wonders if history’s about to repeat itself.
Dakota Remington has devoted his life to working at Gateway Ranch. He’s excited when Kat, his former sweetheart, returns and looks forward to reuniting with her. He finds she’s changed, though, and he’s not sure if it’s for the better. But he’s up for the challenge of the puzzle that is Kat.
Add to Goodreads
Amazon * Apple * B&N * Kobo * Books2Read
Book Trailer
https://youtu.be/B37W6qxaSBc

An eccentric and eclectic writer, C.R. Moss pens stories for the mainstream and erotic romance markets, giving readers a choice of sweet, savory or spicy reads, usually within a sub-genre or two — paranormal, sci-fi/fantasy, time travel, or western flare. She also has a passion for penning dark fiction. Writing as Casey Moss, she delves into the darker aspects of life in her work, sometimes basing the stories on reality, sometimes on myth. No matter the path, her stories will take you on a journey from the lighthearted paranormal to dark things unspeakable. What waits around the corner? Come explore… www.caseymscorner.com
Website * Facebook * Twitter * Instagram * Bookbub * Amazon * Goodreads * Find More Gateway Ranch Books