"Thinking Itself is Dangerous" 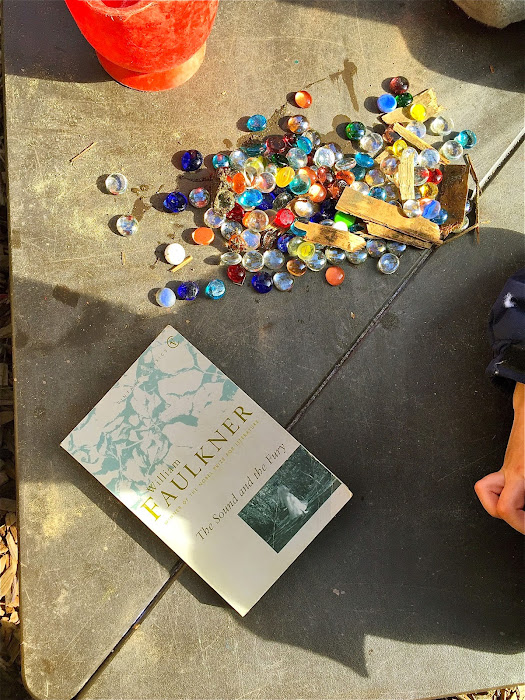 Several years ago, our school community took part in a book drive fundraiser. The idea had been to collect children's books, but many people took the opportunity to empty their shelves which meant we wound up with dozens of "adult" books in our collection box.
One morning, a child brought me a paperback edition of William Faulkner's novel The Sound and the Fury, asking me to read it to him. I told him it was a book for grown-ups, adding, "But some day you'll read it in school. It's a great book." This made him even more adamant.
We were on our way outdoors, so I agreed to read him a few pages on the playground. For those who don't know this book, the first quarter is notoriously difficult to understand, so I figured he would quickly grow bored the way most college students do, but I was wrong. In fact, we attracted other children, who crowded around to listen. It was slow going because of all the questions, many of which I had to answer with "I don't know," although it was a process that helped me better understand the book. The kids approached it like a kind of puzzle, figuring it out together, discussing, debating, and thinking. It was a process that continued for the better part of an hour. We then continued it every day for a week.
I think it's pretty safe to say that we are the only preschool that has ever spent a week studying Faulkner. Most would say his work is too dense, too dark, too adult, but for these kids, for this week, it was where their curiosity took them. It was only later that I learned that this book had been banned by many high schools in the US.
Since the advent of books, there have always been those who would ban them. Indeed, the novels that have been banned in my lifetime reads like a greatest hits list of the last 100 years: Huckleberry Finn, Brave New World, To Kill a Mockingbird, The Catcher in the Rye, Beloved, Ulysses, Animal Farm, The Great Gatsby.
In the last couple of years, the focus of book banning as been on those that address issues of racial justice or that feature Black, Indigenous, people of color or LGBTQIA+ characters: George (Gino), Stamped: Racism, Antiracism, and You (Kendi), All American Boys (Reynolds & Kiely), Speak (Anderson), The Absolutely True Diary of a Part-Time Indian (Alexie), Something Happened in our Town (Celano, et. al.), The Hate You Give (Thomas).
The rationale for banning varies, but it always boils down to the idea that some information, some perspectives, or some ideas are simply too dangerous for young minds. But as political philosopher Hannah Arendt wrote, "There are no dangerous thoughts: thinking itself is dangerous."
To me, this is the real dividing line in education. On one side are those committed to curating and delivering a standardized orthodoxy made up of approved "truth." They might give lip-service to curiosity and play, but only insofar as it can be made to serve to keep the children on track. The curious child may be indulged to a point, but the moment they begin asking questions that the curriculum is not designed to answer, they are lured back into line with the carrots and sticks we call grades or the threat of punishment we call failure. These educators might recoil at being associated with book banners, but by trying to confine learning to pre-approved boundaries, no matter how well-meant, the result is nothing less than the murder of curiosity. Banned books at least have the lure of being forbidden fruit, which is why so many of them become best sellers.
On the other side are those of us who are committed to thinking as the highest goal. And thinking is always dangerous to orthodoxy. It is the process of learning, unlearning, and relearning. It is the quest after truth wherever it takes us. It is not, as with orthodoxy, the simple memorization of approved truth, but rather the practice of asking questions even when the answers make us uncomfortable or continue to elude us. Indeed, the function of education should never be the mere recitation of answers, but rather the posing of new questions. And, fueled by curiosity, it is the pursuit of knowledge that matters far more than orthodoxy.
As we read The Sound and the Fury together on our playground, we pursued our questions wherever they took us. We played together amongst Faulkner's dense, dark themes, making sense of them in places, but mostly just posing questions. Where the children in danger? I think so. They were thinking and thinking itself is dangerous.
******

"Teacher Tom, our caped hero of all things righteous in the early childhood world, inspires us to be heroic in our own work with young children, and reminds us that it is the children who are the heroes of the story as they embark on adventures of discovery, wonder, democracy, and play." ~Rusty Keeler
If you liked reading this post, you might also enjoy one of my books. To find out more, Click here!
I put a lot of time and effort into this blog. If you'd like to support me please consider a small contribution to the cause. Thank you!