The Slow Turning of the Leaves & Bonus Flowers 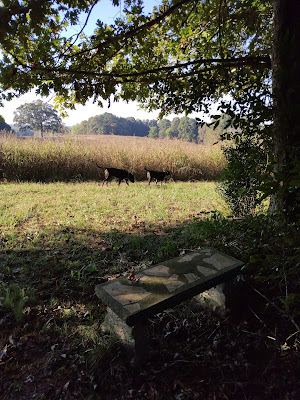 Hello, friends.  Last week, I redeemed rewards at Food Lion for $9 towards my purchase.  For one dinner, I tried a new recipe for peppers stuffed with seasoned mashed potatoes, which used our peppers, potatoes and herbs.  Two library books were enjoyed.  While on the website to purchase lye for soapmaking, I saw they were having a sale on their lifetime membership for $100, down from the usual $500.  With membership, you receive 20% off all purchases.  Not only did they give me 20% off my purchase, but they also gave me 20% off the membership price.  I've already recovered a significant portion of the $80 membership, and though I'd never considered getting the $500 membership, this was definitely worth doing. 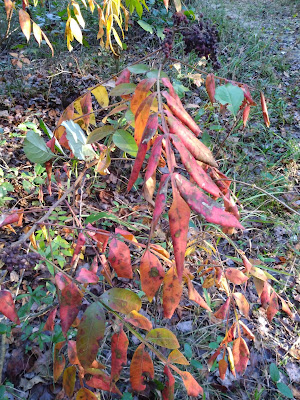 J planted garlic, and seeds of mixed winter greens, kale & turnips, carrots and chard.  I planted more lettuce and beet seeds.  The forecast can always change, but at the moment, it appears we'll make it into November before our first frost.  He has been cutting some of the free firewood, making room for some more someone else wants to give him.  He has lots to split, but has cleared the area where he first puts the large pieces.  It's crazy how much free firewood we've been offered the past couple of years.  We're so thankful for it.  J dumped the old soil from the houseplants in a bed that's never had much done to it, and I planted seeds of evening primrose that neighbors gifted me.  More of the seeds were planted in the beds around the workshop. 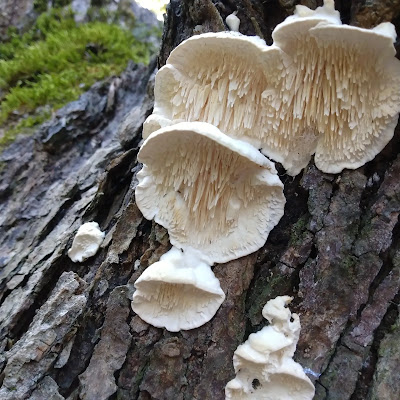 With our library now fully open, I brought in magazines I'd been saving to put in their free basket when I returned a book.  I also had a fun jigsaw puzzle with a books theme, and asked if they might be able to do something with it.  One of the branches in the county does have jigsaw puzzles, and she was very happy to get it for them.  I used some of our eggplant, canned tomatoes and herbs to make Pasta Norma, with our figs and lettuce in a salad.  With our sad butternut squash harvest this year, I've been researching store prices.  Two stores had them at .99/#, but they were .79/# at Aldi's, so I got one there.  I'll see if I can find them any cheaper. 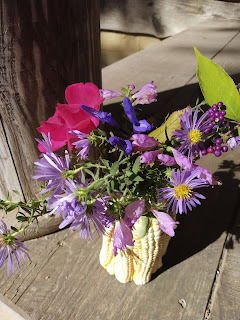 While out thrifting with a friend, we visited a new to me discount grocery.  They had a lot of frozen foods, which I wasn't interested in, but I found kalamata olives for $1.99 and a 5# bag of grits to make bird suet with for $2.99.  While thrifting, I found a lovely enamel pan to save egg shells in before composting for $3.  My old one had rusted enough that it had holes in it.  The Habitat store we visited had a nice bird section in it, with seed and bird houses, among other things.  I found the bird alert decals I use on the kitchen windows and door for less than half price.  Harvested last week, were eggplant, yellow squash, peppers, hickory nuts, black haw and hawthorne fruits, and figs.  With no frosts in our forecast through the 7th, we're enjoying all the bonus flowers.  Wishing you a week of seasonal pleasures.