The Rivalry That Defines the Israeli-Palestinian Conflict

“Today Iran, tomorrow Palestine.” Thus cheered the crowd in Tehran in February 1979, during the Palestinian leader Yasser Arafat’s visit to Ayatollah Ruhollah Khomeini just days after the success of the Iranian revolution. Arafat was the first foreign dignitary to visit Iran after the fall of the shah. For him, Khomeini’s success was a win for the Palestinian cause: His guerilla fighters had helped train Iranian revolutionaries in Lebanon, and he was hopeful that, with Khomeini’s help, he would soon be on his way to establishing a Palestinian state.

This fascinating and relatively little known episode in the Middle East’s history altered the region’s political landscape, and still informs the context in which today’s events in the Palestinian territories and Israel are unfolding. Although the personal relationship between Arafat and Khomeini soured within a year, their encounter marks the moment when revolutionary Iran’s involvement with the Palestinians began, and when the Palestinian issue inserted itself into a then-still-nascent regional rivalry between Saudi Arabia and Iran.

Forty years later, Iran continues to brandish the Palestinian cause to shore up its anti-imperial credentials and project power in the region, posing as the only true defender of the Palestinians. In Tehran’s view, that offers it a contrast to Arab countries that either signed peace deals with Israel, such as Egypt and the United Arab Emirates, or cozied up to it, such as Saudi Arabia. This is why the Biden administration must view the Israeli-Palestinian conflict as a piece of the wider puzzle as it seeks to revive the nuclear deal with Iran: because that’s how Tehran sees it.

That’s not to dismiss the seven-decade long plight of the Palestinians, dispossessed and expelled repeatedly from their homes. Nor does it take away from the horror of the violence between Israeli Jews and Arabs, from Haifa to Lod, and the alarming rise of Jewish extremism.

But that meeting decades ago remains essential to understanding how the Israeli-Palestinian conflict is used by those who aren’t directly impacted to advance their own agendas, and how differently it features in the Middle East today compared with even two decades ago.

When I began researching my book on the Saudi-Iranian rivalry, I did not expect to find that the Palestinian cause had played a role in the Iranian revolution, nor that it was a thread in the long-running proxy battle between Riyadh and Tehran, which also began in 1979. The two countries’ competition for influence is the key undercurrent that has driven, and continues to drive, many of the political, religious, and cultural dynamics in the region, as well as conflicts in Yemen, Syria, and Iraq.

The Arab-Israeli conflict began well before the Saudi-Iranian rivalry and continued to evolve mostly in parallel, with its own dynamics of occupation, wars, intifadas, invasions, and withdrawals. Saudi Arabia and Iran used different approaches to appropriate the issue of Palestine: Riyadh by using fiery rhetoric and promoting peace plans and Tehran by funding groups such as Hamas and Hezbollah. Then the Clinton administration’s efforts to secure peace between the Israelis and the Palestinians failed, the second intifada started in 2001, and Iran pushed itself further onto the Palestinian scene, building on what had begun in the guerilla training camps in Lebanon in the 1970s. Since then, the Saudi-Iran rivalry and the Arab-Israeli conflict have become even more intertwined.

Now Israeli Prime Minister Benjamin Netanyahu argues that the real threat to his country comes from Iran, not what seemed to be a dormant conflict with the Palestinians—that Israel could exist with a no-cost occupation while progressively establishing relations with Arab countries such as Bahrain and the UAE. Though these countries had their strategic and economic reasons for signing the Abraham Accords, there was always an anti-Iran slant to their unspoken cooperation with Israel.

For a long time, Arab regimes used the Arab-Israeli conflict to defend their bloated military budgets and explain away human-rights abuses and oppression—claiming that it was all in service of a greater cause. The Obama administration tried, sporadically, to resume negotiations and find a way forward, but senior United States officials recognized that Arab regimes had been using the conflict with Israel to distract their citizens from their own poverty and hopelessness. U.S. officials still mistakenly thought, however, that this meant that Washington could put the Palestinian issue on the back burner and focus on development and human rights—especially when the 2011 Arab uprisings erupted. When President Donald Trump declared Jerusalem the capital of Israel, the lack of upheaval across the region was also taken as confirmation that the fire of the Palestinian-Israeli conflict had died.

[Read: The Muslim world’s question: ‘What happened to us?’]

But decisions such as these fuel the deep sense of abandonment that Palestinians have felt over the decades. A similar feeling of isolation is what initially drove Arafat to seek out Khomeini in the late 1970s, after successive Arab defeats in wars against Israel. Even worse was Egypt’s perceived betrayal, when Anwar Sadat broke ranks and became the first Arab leader to visit Israel, in 1977. It was around then that Arafat decided he needed new friends. The region’s most powerful military, aside from Egypt, belonged to Iran, but the Shah—who was still ruling the country—was a friend of Israel. Hundreds of Iranian revolutionaries, Marxists and Islamists alike, were already training in various Palestinian camps in Lebanon when Arafat made contact with Khomeini in 1977, just as the revolution in Iran started to simmer.

The ayatollah had identified the Palestinian cause early on as one that could give him appeal beyond Iran’s borders and beyond the Shia Muslim community, one that he could latch on to and make his own, undermining Saudi Arabia’s leadership of the broader Muslim world.

Arafat’s visit to Tehran in 1979 was triumphant, but even then there was tension. Khomeini wanted Arafat to embrace the Islamic precepts of revolution and abandon his nationalist rhetoric. Arafat was not interested. Within a year, the mood had turned. Palestinian guerillas believed the people around Khomeini were religious “nut cases,” while Khomeini’s acolytes looked at the Palestinian fighters with disdain: They drank, didn’t pray or fast, and wore ties. But Khomeini had what he needed—an in with the Palestinians, some of whom thought Arafat was too moderate. They would go on to establish Islamist factions, eventually leading to the birth of Hamas.

Revolutionary Iran proclaimed the last Friday of Ramadan to be al-Quds Day, or Jerusalem Day, marked by military parades and anti-Israel and anti-American chest thumping. Later, Tehran would set up the Quds Force, led for years by General Qassem Soleimani and ostensibly meant to liberate Jerusalem, though it made destructive detours in Beirut, Aleppo, and Baghdad.

The events this week have been a reminder of the secular, nationalist currents that have long undergirded the Palestinian cause: In the late 1970s, a poster hung on the wall in the Palestine Liberation Organization’s Beirut offices bearing the title A List the People Will Complete, below which were the names of several countries. Three of them, Ethiopia, Vietnam, and Spain, had red check marks next to them—countries liberated by anti-imperialists. In February 1979, a red check mark was added next to Iran, while Palestine and Egypt still waited farther down the list. Before the latest violence erupted between Arabs and Jews within Israel, and before Hamas again started lobbing rockets at Israel, peaceful protests were being conducted by young Palestinians in Sheikh Jarrah, speaking out in international media, talking about international law and smiling bravely while they were being arrested by Israeli forces. They believe they are hearing more and more voices in support of their cause around the world, and in the halls of power, including, crucially this week, numerous voices in the U.S. Congress. They are mobilizing in ways we haven’t seen before, in the occupied territories, in Gaza, in refugee camps around the region, and in the diaspora.

There is limited hope among Palestinians: Egypt is trying to broker a cease-fire. Saudi Arabia and the UAE have condemned Israel’s actions, beginning with the eviction of Palestinians from land claimed by Israeli settlers and have called on all sides to “show restraint.” President Joe Biden has dispatched Deputy Assistant Secretary of State Hady Amr to Tel Aviv. (With more than $3.3 billion in aid given, Washington has the most influence on Israel.) But the signs are not good. Any cease-fire will be a temporary fix. Arab capitals have limited leverage. And the U.S. has twice blocked efforts at the United Nations to address the violence, with Biden rebuffing calls by some in his party to condition aid to Israel on how it treats Palestinians. Biden seems eager to avoid being dragged into the conflict. But his administration should know that no matter how much it wants to deprioritize the Middle East, even the singular goal of reaching a nuclear deal with Iran can be undermined by violence in East Jerusalem, and Hamas rockets flying into Israel.

Ultimately, the Palestinians are still mostly on their own. Their anger is directed against Israel first and foremost, but there is also rage for all those who they argue should be helping them but are not: the Palestinian Authority and President Mahmoud Abbas, who has been in power since 2005; Arab countries that profess brotherhood and common cause but only pay lip service to the Palestinian cause; Washington, which rhetorically voices commitment to human rights and justice but does little to hold its allies, including Israel, accountable on these fronts. The Syrian-Palestinian writer Nidal Betare, who grew up in the Yarmouk refugee camp in Damascus, also raged in a Twitter thread against Hamas and the Palestinian Islamic Jihad. In it, he accused them of having lost their role as liberation movements and having turned into guns for hire, their leaders sitting comfortably in Damascus or Qatar while Palestinians are being bombarded in Gaza.

Some Palestinians may look to Iran as their last ally, and may well cheer the Hamas rockets as the sole way to push back against Israel. But for more than 40 years, the Islamic Republic has used the Palestinian cause for its own advancement. These days, Iran’s foreign minister, Mohammad Javad Zarif, tweets his outrage at Israel and the “racist criminal behavior of the usurpers” before flying to Damascus to meet Syrian President Bashar al-Assad—the same man who unleashed hell on his own country and besieged and starved thousands in Yarmouk. 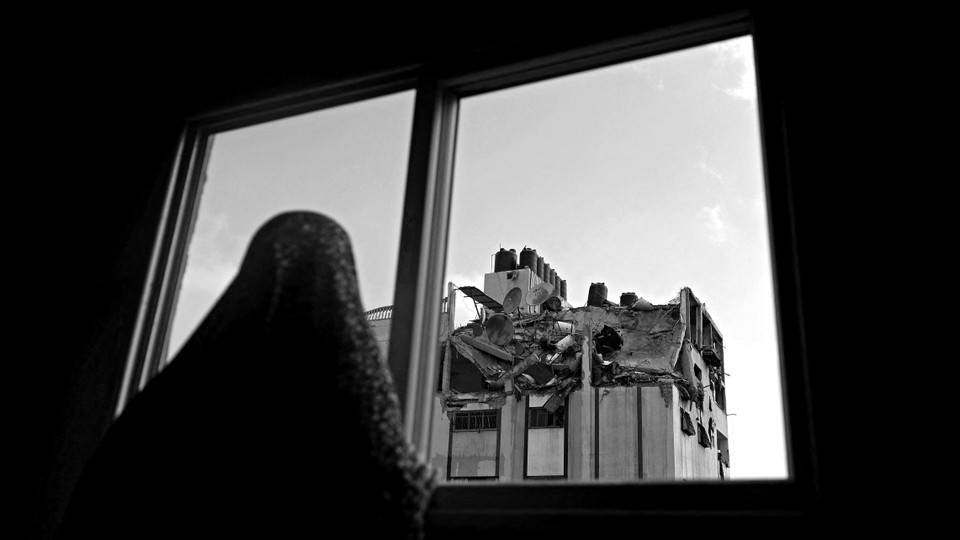