Today we welcome Sophia Rose to the blog to share The Jupiter Knife, the second urban fantasy novel in the The Cunning Man series by DJ Butler and Aaron Michael Ritchey. Narrated by Stephen Bel Davies you’ll want to add this one to your audiobook list! 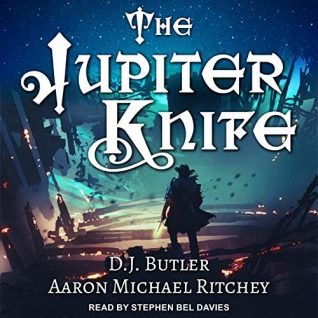 EVEN GHOSTS NEED HELP FROM A CUNNING MAN. A new novel in the Cunning Man series from Dragon Award-nominated author D.J. Butler and Aaron Michael Ritchey.

Hiram and his son Michael are dowsing a well in Eastern Utah when they hear a cry of help from the ghost of a small boy, torn to pieces by wild animals. Before they can even begin to look into that tragedy, however, a prosperous local rancher is murdered right before their eyes.

In an attempt to both help the ghost and find the killer, Hiram and Michael must navigate an eccentric cast of characters that includes failed bank robbers, a seductive fortune-teller, an inept sheriff, a crazy prospector, and a preacher with an apocalyptic grudge against the Roosevelt administration.

The mystery, however, isn’t just in the hearts of men. There’s an astrological puzzle that Michael, now his father’s apprentice, must solve. Meanwhile, the murderer is moving slowly against Hiram and Michael, forcing them into a trap from which there is no escape.

Old West meets Urban Fantasy… irresistible! I love westerns, mysteries and urban fantasies so when I spotted this latest release in The Cunning Man series that brought all those genres together in one spot, I happily jumped on board for the mysterious adventure.

The Jupiter Knife is the second of The Cunning Man series.  While there were many references back to their first adventure, I was easily able to pick this one up and dive into a clever father-son team of heroes.

In truth, I got the ‘Old West’ part technically wrong since the story’s time frame is actually set in the American West during The Great Depression Era.  That said, small town Eastern Utah populated by ranchers and miners hadn’t changed all that much in some ways so I got my western fix just fine.

I was intrigued by a man, Hiram, who worked old lore magic like a hedge witch while was a deeply spiritual Mormon.  At the same time, Hiram’s adopted son Michael is Navaho and still skeptical of the Cunning Man role and agnostic about Hiram’s faith. There is a little tension because of the difference in believes, but mostly, they love and respect each other.  Hiram is proud of how beautiful Michael’s intellect is and dreams of him going off to university and becoming a great scientist, while Michael is just as impressed with Hiram’s humble, generous spirit and skills with simple magic that helps others.  Hiram and Michael are something of outcasts because of Hiram’s gifts and Michael’s race, but they shrug it off and go on with life. They work well together.

As to the situation, it begins when Hiram accepts the task of dowsing to find water for a Moab area rancher. The rancher is prosperous and generous and has many friends from town, including the local Mormon bishop who isn’t concerned in the slightest about Hiram being there. From the crowd of men, they learn of a ghost who haunts the ranch land out by the rock arches, about a quirky guy prospecting for uranium, about a hell-fire crazy preacher out in the canyons, and a woman psychic medium in town. The ghost intrigues Hiram, who is burdened to help it find peace after they discover it was a murdered boy. Soon, they are on the spot for a new murder and some dangerous secrets hiding in Moab.

The book takes a meandering, gentle pace as it sets up the new situation, introduces the characters, and even after the murders are introduced. It is one of those sleeper stories that jumps into action, but starts off slowly. I felt the drag of the earlier part of the book even while I devoured all the background, situation, and character introduction, but I never got bored. There was a vast deal of unique paranormal lore and even religious, spiritual, and ritual elements to add some great flavor to the story. And, through it all, I got to know and adore both Hiram and Michael.

Stephen Bel Davies is a solid match as narrator for the book. He had a casual style that took me time to adjust to, but then I liked his work. His voices were distinct for all the characters, particularly Hiram and Michael. I loved his voice for the widow- I swear he was channeling Marlene Dietrich and the choleric Reverend. He adjusted to scenes and situations so the story came alive.

In summary, this was an unexpected, sparkling surprise. Hiram and Michael are new favorite characters and the world of their stories has me captivated. I will definitely be back for more and want their first story. A clever, refreshing spin on this genre mash up that I recommend.

Aaron Michael Ritchey was born with Colorado thunderstorms in his soul. He's sought shelter as a world traveler, an endurance athlete, a story addict, and even gave serious thought to becoming a Roman Catholic priest. After too brief a time in Paris, he moved back to the American West and lives semi-comfortably with three forces of nature: a little, blonde hurricane, an artistic tornado, and a beautiful, beautiful blizzard.

D.J. Butler (Dave) is a novelist living in the Rocky Mountain west. His training is in law, and he worked as a securities lawyer at a major international firm and inhouse at two multinational semiconductor manufacturers before taking up writing fiction. He is a lover of language and languages, a guitarist and self-recorder, and a serious reader. He is married to a powerful and clever novelist and together they have three devious children. Dave is published by Baen, Knopf, and WordFire Press. He writes adventure fiction for all ages. He writes for young readers under the name Dave Butler

Never miss a post by adding Caffeinated to your Inbox

Sophia is a quiet though curious gal who dabbles in cooking, book reviewing, and gardening. Encouraged and supported by an incredible man and loving family. A Northern Californian transplant to the Great Lakes Region of the US. Lover of Jane Austen, Baseball, Cats, Scooby Doo, and Chocolate. Associate Reviewer for Delighted Reader blog.