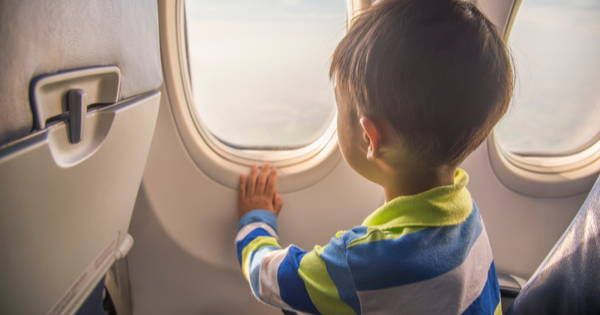 Successful people are tenacious, which means they keep the faith much longer than the average person does.

– Jen Sincero, “You Are a Badass at Making Money”

How tenacious are you? What is your stick-to-itiveness like? Do you hold fast to whatever is you want in life? Or are you comfortable with, dare I say…settling?

I recently read a story about a boy on a plane that has stuck with me. I laughed out loud the first time I read it. And whenever I’m in need of a kick-in-the-pants reminder about not settling for anything less than my heart desires, I think of that determined little boy on the plane and smile.

Then I get back to work.

I came across the story in the hilariously brilliant book, “You Are a Badass at Making Money; Master the Mindset of Wealth,” by Jen Sincero.

“I remember seeing one of the most impressive displays of tenacity on a flight once while waiting for my plane to take off,” the author continues. “A woman came bursting on with her two sons just as they were closing the doors with that sweaty, disheveled, wild-eyed look.”

“We’re all sitting there,” Sincero explains, “a captive audience strapped into our chairs, watching her try to find a place for their luggage in the overhead compartments, deal with getting kids in their seats, and apologize to the entire plane for the holdup. She obviously booked the flight last minute, too, because they weren’t sitting together, they each had middle seats, one in front of the other, which made it even more difficult for her to get everyone settled.”

“But her real difficulty,” Sincero continues, “was with her older son, who refused to sit down. He was about nine years old, and as he watched his little brother climb into his middle seat, he quietly informed his mother that he wanted a window seat. She responded with something about him being out of luck and that he needed to sit down right now, to which he calmly replied, “No, I’m sitting by the window,” to which she hissed, “Sit down,” to which he said, “No,” to which she shot another apologetic look down the aisle.”

“I’m sitting there,” says Sincero, “trying to figure out if I should give him my seat and end her torture, give him a talking to, or hire him as my coach. I’d never seen such unshakable, calm resolve in the face of such great danger—an entire airplane full of pissed-off grown-ups. Yet this kid, without being bratty or pitching a fit, held his ground until the guy in front of me got up and switched seats with him.”

“His desire for, and vision of, his goal outweighed and blinded him to all other options: public humiliation, verbal abuse from adults other than his mother, no screen time for the rest of his life,” writes the author. “He had the stick-to-itiveness to pooh-pooh one of the biggest blocks to success known to man: the need to be liked and fit in.”

“Your desire to grow into who you’re meant to be,” advises Sincero, “must be firmly placed in the very front of your mind at all times—as must the specifics of the life you’re creating for yourself, and the feelings associated with it, so you have the courage to stay your course.”

Wow, wow, wow! I hope you find this story as inspiring and insightful as I did. When it comes to living our ideal life and reaching our highest potential, it is imperative that we develop the tenacity to be able to stay focused on—and keep working towards—whatever it is we want—whether that’s a window seat on a plane, buying a beach house, making the world a better place, running a successful business, thriving in a happy and healthy intimate relationship, and so on.

And a big piece of the tenacity puzzle is, of course, developing the wisdom, ability, and courage to say no to anything less.

The post Take This for Tenacity – What a Boy on a Plane Can Teach Us About Success appeared first on The Good Men Project.