HANK PHILLIPPI RYAN: Okay, we LOVE having new guests on Jungle Red. And sometimes we introduce them, with much fanfare and admiration. Sometimes we simply say: take it away, new guest! 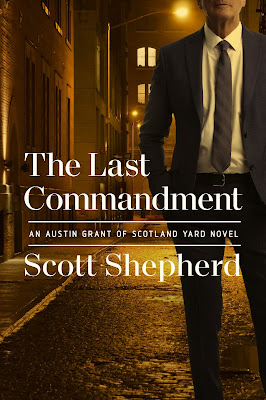 But today--something completely different. I was researching Scott Shepherd, whose amazing thriller THE LAST COMMANDMENT is out right now, and I found an article where he was interviewed.

So, then, Reds and Readers, my jaw hit the floor. And I thought--you know? I’ll let my pals here on JRW have the fun of meeting him the same way. (And then read his wonderful post, and see an amazing photo.)

So lean in toward your screen, and read this. Whoa.

“Q. Hollywood can be tough but you’ve had a very successful career running hit shows like The Dead Zone, The Equalizer, Miami Vice and Quantum Leap. How did you end up in the entertainment industry to begin with?

SCOTT SHEPHERD: Like I mentioned, I was raised in a Hollywood family – going back three generations to the 1920’s. My father, Richard Shepherd was a producer (films like “Breakfast at Tiffany’s” and “The Hunger”), an agent (he started CMA), and ran a couple of studios (Warners and MGM). My maternal grandfather, William Goetz started 20th Century Fox, ran Universal and was a prolific producer of films including “Sayonara”.

And his father-in-law, my grandmother’s father, was Louis B. Mayer who made more hits than one could count – so I grew up seeing those kind of stories. With all of them being producers, I wanted to distinguish myself for my own work—thus became a writer.

For my first decade in the business, I didn’t really talk about my family, wanting to be accepted on my own terms. Two dozen TV shows later and four times as many scripts, well, it’s a legacy I’m still trying to embrace but certainly willing to talk about because there are a ton of interesting stories. "
HANK: I know this is NOT the most amazing thing about the above, not by any means, but may I just say--QUANTUM LEAP? One of my favorite shows of all time. Oh. Thank you, Scott.

And now, Reds and readers, here’s more from our amazing guest.

And I’ll give a copy of THE LAST COMMANDMENT to one lucky commenter!


IT’S NOT A RADIO SHOW

I’ve always loved mystery books and thrillers. It started with my paternal grandmother bringing me a couple of Hardy Boy books on her twice-a-year visits to California from Kansas City. I gobbled them up and always loved the last page which teed up their next adventure – “Frank and Joe didn’t know it but soon they’d be caught up in The Mystery of the Old Mill.”


This led to reading Erle Stanley Gardner’s Perry Mason books and then Ross MacDonald where I completely embraced this art form. Decades later I’ve collected close to ten thousand of them, always intending to write a series of my own.

But you might say I got derailed by television.

No real complaints. In three decades plus, I’ve worked on over two dozen series and been the show-runner on half of them. But it didn’t stop me reading the books I adored. And nothing compared to getting to work with writers I admired over the years – Stephen King, Karin Slaughter, and Harlan Coben to name a few—and adapting their tales for television.

As a result, a funny thing happened. Being someone who really never outlined much, as structure was something that came fairly easily (thank you reading tons of detective fiction and plotting out TV dramas), I was suddenly writing thirty to forty page outlines in prose, basically novellas that turned into the scripts we shot.

So, a few years back, encouraged by my novelist friends, I rolled up my sleeves and took a stab at finally writing a book. Two of them actually, that both sold—but neither in my beloved mystery/thriller field. Looking back, I think I was wondering if I could make that transition from television to mainstream fiction before attempting it.

I got enough positive feedback that I finally decided to try my hand at an idea that had been a movie in my head for close to thirty years. And thus, The Last Commandment was born – the first in a series of mystery novels.

Now, with the book being released this July, and its sequel (Till Death) in the pipeline for the summer of 2022, I realize I’ve reached a logical moment in my career—embracing the type of books I’ve read my entire life by learning my craft working on television shows with characters we invited into our homes each week. Much like our favorite authors serve up an annual dish featuring their beloved protagonists to avid readers like myself.

Except there were distinctive differences between the two mediums.


I’ve often said, that if I were to write my autobiography about writing for television, it would be entitled It’s Not a Radio Show.

The first thing I realized about writing a novel was that it is a radio show. Description was suddenly my ally—and part of my job was to utilize all five senses for the reader, not just relying on sight and sound.

Then, there’s football versus baseball. Why suddenly bring up sports, you ask? Because I came to think of writing for television as an NFL game—there’s a timed structure to it. Four quarters, sixty minutes, the game plays out under those strict parameters—much like how a television show is under a similar constraint of time. Your characters have to do something that feels genuine but fits in between commercials or a given limit of minutes.

Novels, on the other hand, resemble a baseball game. It starts when it starts, and ends when it ends.It might be a tight pitcher’s duel that is over before you know it. A slugfest that keeps you on the edge of your seat. Or it might go into extra innings, with a slew of additional pages that keep you wondering when an unexpected denouement will finally occur. Time is actually your friend.

Luckily, I’m a fan of both sports—so there’s room in my life for both.

But I’ll let you in on a little secret. As a lifelong ardent Dodger fan, I’ve been hooked on baseball ever since I was a toddler and saw my idol Sandy Koufax pitch a perfect game. And I’ve had a love affair with the mystery novel for just as long.

I know I’d be more than happy if it was baseball season on the radio all year long.


HANK: Oh, you ALL! SO much in here! The Hardy Boys--did you read those? And I grew up watching Perry Mason on TV--my lawyer-dad would not let us say a word while Perry was on. Baseball! Love baseball. (I’m in Boston, after all.)

And so much to learn from television--I would not be an author without having written TV news stories for the past forty years.

And did I mention how much I love Quantum Leap?

So, Reds and Readers, what was your favorite element of his blog? And what should we ask Scott? (Sounds like he knows about exactly the stuff we care about, right?) Pssst: Ask him about Bruce Springsteen.

And a copy of The Last Commandment to one lucky commenter!

Here’s where we usually put a bit about the book and a bio. But instead, I really want you to hear it from Scott himself. So here’s more of that interview.

Q. How did the idea to write a mystery based on the Ten Commandments (now titled THE LAST COMMANDMENT) come about? 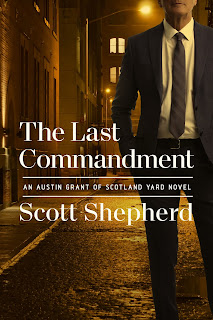 SCOTT: Strangely enough, I’ve had this particular idea in my head for close to thirty years – where it started out as a movie –with two cops (Scotland Yard and NYPD) being fish out water with a really cool girl in between them. I wanted something to drive the story, a puzzle of some sort, and at some point, someone the two of them would go after together – and the Ten Commandments appeared in my head. By the time I decided to turn it into a novel, I didn’t have much more – just the first murder in the book – and well, the last.

Q. Do you base your characters on people you know or are they entirely fictional?

SCOTT: The three characters in this book series are pretty much fictional, but have some aspects that I’ve drawn on from my life. Grant, at 60, has the perspective that I do now at that age – so a lot of what he thinks and feels comes from there.

Also, one of the first TV series I did was “The Equalizer” and the lead in that show, the late Edward Woodward was wonderful and I have to admit that Grant is easy to write for me, because I could so see Edward, god rest his soul, doing it such justice.

Rachel and Frankel on the other hand are a sort of representation of me and my wife’s courtship and relationship back thirty years ago – although neither one of us is a journalist or a cop. But I’ve stolen (or paid homage) from us for sure.
Back to Feed
Use left/right arrows to navigate the slideshow or swipe left/right if using a mobile device