Poisoning the Planet’s Web of Life 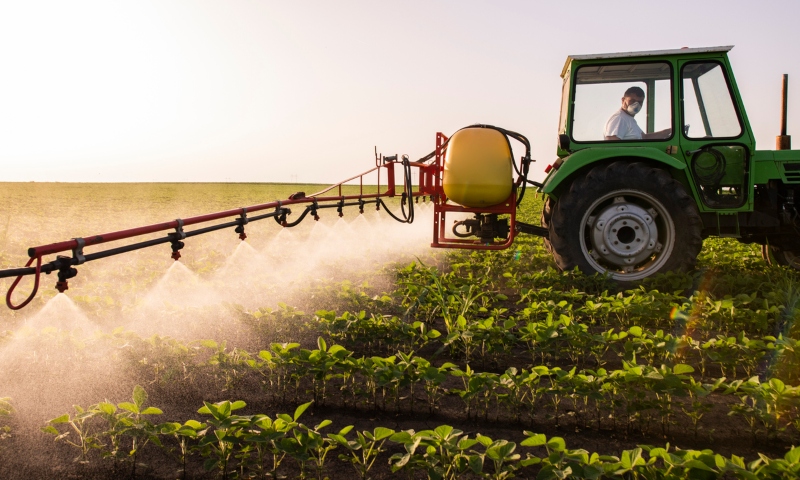 The Web of Life is under attack but almost nobody is aware because it’s happening mostly below the surface. Scientists have identified a rampant worldwide Bugpocalypse that’s methodically killing the planet’s most significant and most crucial life support system, and it’s intentional!

The victim is soil, which is the life source for 95% of the foods we cram down our throats three times per day, 365 days per year.

A new landmark study has identified the killer of nature’s greatest achievement of all time, soil. Based upon this major new research only recently released, the culprit or soil killer is agricultural pesticides, as follows: “Study after study indicates the unchecked use of pesticides across hundreds of millions of acres each year is poisoning the organisms critical to maintaining healthy soils,” Donley added. “Yet our regulators have been ignoring the harm to these important ecosystems for decades.” (Source: Tari Gunstone, et al, “Pesticides and Soil Invertebrates: A Hazard Assessment,” Frontiers in Environmental Science, May 4, 2021)

“Below the surface of fields covered with monoculture crops of corn and soybeans, pesticides are destroying the very foundations of the web of life,’ said study co-author Nathan Donley, a scientist at the Center for Biological Diversity… A handful of soil contains an estimated 10 –100 million organisms belonging to over 5,000 taxa… Soils contain an abundance of biologically diverse organisms that perform many important functions such as nutrient cycling, soil structure maintenance, carbon transformation, and the regulation of pests and diseases,” Ibid.

All of which prompts a troubling thought: What impact does pesticide have, not only on the organisms within the soil, but on the entire network from industrial farming to food processors to supermarkets with packaged goods that people buy to satisfy hunger and/or just plain ole gluttony, binging, gorging, or on occasion pigging out? Answer: It’s not a pretty picture.

It should be noted that the study is classified as “the largest, most comprehensive review of the impacts of agricultural pesticides on soil organisms ever conducted.” (Source: Pesticides Threaten the ‘Foundations of the Web of Life,’ New Soil Study Warns, EcoWatch, May 4, 2021)

By all appearances, this is a monstrous scandal that’s hidden from sight within the world’s soil as well as hidden behind lackadaisical, slipshod regulations. Worse yet, after years of unbridled poisoning, nobody seems to care enough to do anything about it because it’s not on the “Save the Planet” top ten list.

Moreover, similar to other toxins spread throughout the world, like nuclear radiation exposure, it takes many years for the harmful impact to be fully recognized, e.g., according to the Ukraine Health Ministry, three decades after the fact, there are 2,347,863 Chernobyl-related cases, including 453,391 malformed and/or diseased children, not yet born in 1986. Their parents were children when Chernobyl’s nuclear core melted down. (Sources: BBC special report: The True Toll of the Chernobyl Disaster d/d July 26, 2019 and USA Today, Chernobyl’s Legacy: Kids With Bodies Ravaged by Disaster, April 17, 2016)

Hopefully, this landmark study, which clearly proves massive poisoning of the web of life, arrives in the public’s hands early enough, and is taken seriously enough, to do something about an impending crisis like no other crisis throughout all of human history, i.e., universal toxicosis.

The study concludes that sweeping changes are needed to protect the web of life: “It’s not just one or two pesticides that are causing harm, the results are really very consistent across the whole class of chemical poisons… Co-author Tara Cornelisse, an entomologist at the Center for Biological Diversity, concurred that ‘it’s extremely concerning that over 70% of cases show that pesticides significantly harm soil invertebrates,” Ibid.

According to statements by the researchers: “The paper constitutes a comprehensive review of the impacts of agricultural pesticides on soil invertebrates. We found that pesticide exposure negatively impacted soil invertebrates in 70.5% of 2,842 tested parameters from 394 reviewed studies.”

Those percentage results for invertebrate loss interestingly jive with a recent report of vertebrate loss issued September 10th 2020 by the World Wildlife Foundation, in collaboration with the Zoological Society of London entitled: “The Living Planet Report 2020,” which shows a loss of 68% of vertebrate life in less than 50 years. Figures like that are within earshot of extinction-type numbers from millions of years ago.

These extraordinarily high percentage losses of life make it nearly impossible to grasp the true gravity of the situation. These are ‘off the charts’ numbers of destruction of the most basic forms of life, gone forever. How long can this persist?

The Gunstone study “Pesticides and Soil Invertebrates: A Hazard Assessment,” which is the subject of this article, conducted 51 studies within Europe, 30 in the United States, eight in Australia, seven in Canada, and five or less in Argentina, Brazil, Cameroon, Columbia, Egypt, India, Japan, Madagascar, Mexico, New Zealand, Sri Lanka, South Africa, and Yemen confirming the conclusion that “from these data, it is apparent that, as a set of chemical poisons, pesticides pose a clear hazard to soil invertebrates,” Ibid.

“The United States Environmental Protection Agency does not have sufficient testing requirements or tools in place to quantify the risk to soil-dwelling organisms. The European honeybee is the only terrestrial invertebrate included in mandatory ecotoxicological testing of pesticides. The practice of using the honey bee as a surrogate underestimates harm to many taxa and often results in narrow efforts to mitigate pesticide impacts solely to honey bees and other pollinators, not soil organisms,” Ibid.

“Rachel Carson blew the whistle on global poisoning in her 1962 book Silent Spring, which focused on one particular chemical, DDT, leading to a worldwide ban in 1972. (Ed. If it had not been banned, today only airplanes would be flying in the sky, maybe) Since she wrote her book, worldwide production and use of pesticides in agriculture has more than quadrupled, exceeding 5 million tonnes in 2017.” (Cribb)

“In recent years, a growing flood of scientific papers has reported more and graver health impacts as a result of the chemicalisation of our food supply, for example, in 2018 Irva Herzz-Picciotto and colleagues reported brain damage to unborn children and adult deaths resulting from exposure to organo-phosphate pesticides, which are widely used in agriculture all over the world… what consumers often fail to understand is that many of these toxic chemicals used in food production do not just vanish after they have been used and continue to cycle through the natural world, lingering in the soil and concentrating up the food chain to result in doses often times many times stronger by the time they reach humans.” (Cribb)

The Gunstone paper is a landmark study that exposes a frightening side to the world that has been hidden from public view for decades. But, what can be done? Are there “save the soil” advocacy groups?

Soil is alive, a complete self-sustaining ecosystem with 10-to-100, 000,000 organisms per handful! Whereas, dirt does not support life, with few, if any, minerals, no nutrients, or living organisms, no worms, no fungi, and lacking texture and structure. Poisoning the planet’s soil, or its web of life, turns it into dirt.

Who would’ve ever guessed that agricultural practices would turn soil into dirt? The paradox is beyond breathtaking, but it does fill some open slots within ”The World is Insanely Stupid” jigsaw puzzle.

“Someday we shall look back on this dark era of agriculture and shake our heads. How could we have ever believed that it was a good idea to grow our food with poisons?” (Jane Goodall, Harvest of Hope, 2005)


Need more info? A complete list of benefits is here.

The post Poisoning the Planet’s Web of Life appeared first on The Good Men Project.