Losing another little bit of the Texas heritage 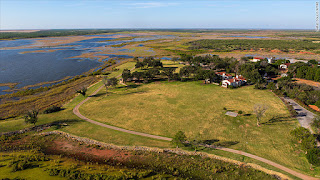 The Turkey Track Ranch in the Panhandle is for sale. That announcement got me thinking of the sale of large ranches, family-owned for generations. By my standards and probably yours, the Turkey Track is huge—80,000 acres, under one fence, near Borger, with twenty-six miles fronting on the Canadian River. For well over a century, the land has been worked by the Coble/Whittenburg families, who have now announced the sale. Whoever buys this property will get wind and solar rights and a percentage of oil and mineral rights. They will also get a piece of history because the land was the site of the two Battles of Adobe Walls (1864 and 1874), the first pitting Native Americans against the U. S. Army, the second forcing hunters to shelter in the old fort and hold off an Indian attack. A fenced area and markers protect the site today.

It makes me, who has always been a city dweller, a little sad that we are losing these legendary ranches. Two of the largest in the state, the Four Sixes and the Waggoner Three D, have recently sold. With the publication just yesterday of my book, The Most Land, the Best Cattle: The Waggoners of Texas, the Waggoners are much on my mind. Their story almost parallels the story of the Four Sixes. Both were founded by men now legends in ranch history—W. T Waggoner followed in the steps of his father, Dan Waggoner, to build the Three D into an empire, and Burk Burnett, also the son of ranching, followed his father, Jeremiah, into the business. Both Burk Burnett and W. T. were full-fledged ranchers by the time they were twenty. Each built an empire that proudly boasted award winning cattle and Quarter Horses, yet their empires depended on oil. Both men eventually became what you might call “city ranchers,” moving their families to Fort Worth where they built cattle baron mansions.

Cattle from both these ranches were pastured in Oklahoma, at what they called the Big Pasture, land on the Kowa reservations which they leased through an arrangement with Quanah Parker, son of the most famous Indian captive, Cynthia Ann Parker. W. T. and Burk Burnett were among the hosts when President Theodore Roosevelt was taken on a hunting expedition in the Big Pasture. TR later wrote exultantly about Jack Abernethy, the wolf hunter who caught his prey by hand.

Interestingly enough, both men had daughters of note. Burnett, twice divorced, left his land to his daughter, Anne Valiant Burnett Tandy, known for her expertise and knowledge of the horse and cattle world as well as collectible art. What few people know is that, briefly, Anne, then young, was married to W.T.’s son, Guy. Her leave-taking was spectacular—she drove through something like thirteen gates without stopping to open them. Known as Big Anne, she left the empire to her daughter, Anne Burnett Windfohr Marion, also an expert horsewoman and authority in the livestock world as well as the art world; she and her husband founded the Georgia O’Keefe Museum in Santa Fe. Little Anne, as she was known, held offices in the American Quarter Horse Association and the Texas Southwestrn Cattle Raisers Association.

W.T.’s daughter, Electra, was an international socialite who lived an extravagant life and died young, perhaps because of over-indulgence. W.T.s granddaughter, from son E. Paul, was also a socialite and celebrity, but Electra II was a sculptor of some reputation, and she lived almost all of her adult life on the ranch, married to one man.

Now both those iconic ranches have been sold to investors. The Four Sixes was sold last year to a group fronted by Taylor Sheridan, creator of “Yellowstone.” The Waggoner Three D went to investor and sport magnate Stan Kroenke in 2016. Both sales so far have not resulted in drastic changes in the operation of the land. Kroenke, who owns several other ranches, sports teams, a winery, and a luxury resort, has said he will not divide the ranch. Nor does Sheridan seem likely to divide the land; he owns smaller ranchers in Weatherford, where he raises horses, and Jacksboro where he raises cattle. He has set one season of “Yellowstone” on the Four Sixes.

When I wrote the line that for the first time in 167 years, no Waggoner occupied the land, I felt a certain sadness. The Burnett family had a passion for their land and with the ranch in the hands of an investment group, some of the glory and glamor seems gone. So too Dan and W. T. had a passion or their land and their cattle and horses; admittedly younger members of the family didn’t seem to share that, though Electra I loved to take guests there and Electra II seemed tied to the land. Yet is was she who in the end wanted to sell, a switch in attitude that I puzzle over to this day.

We have the history and the legend, and cowboys still work the range, from horseback and helicopter, but it all seems a bit different. And a bit sad.