To be clear, I am well aware that there are far worse maladies than a broken wrist. Even two broken wrists, which if it weren't happening to me, I might find somewhat comical. Maybe comical is not the right word--make it incredulous.  That said, on one of my few times walking, probably to the mailbox while wearing my sling, a neighbor walking his dog asked, "shouldn't it be about time for you to be out of that?" When I explained that I would like nothing more, he told me that the same happened to his uncle and if I remember correctly, he said that it happened three times! "So, I am not the only one", was my reply.

Perhaps it was that same morning that I ran into another neighbor wearing a splint and sling who also broke her wrist and was awaiting surgery. We compared notes on pain. Andrea told me that she tripped on a rug in her home and that the pain was the worst of her life, including a knee replacement. Although I would not wish the pain I've experienced over the last two and a half months on anyone, at times it has felt that maybe my reaction has been too strong and I am not the tough woman I thought I was. In a weird way, she helped me, knowing that others have felt the same.

It's an epidemic in our village! I think that we've had as many broken wrists in the last year as we've had Covid 19 cases which is downright crazy to consider.

Around the complex there are dozens and dozens of Crepe Myrtle trees that each year are cut back almost to the trunk. Never mind that the practice is outdated because if they are not trimmed those who know the old ways protest vehemently. I am no expert on the matter, just someone who appreciates it when they bloom again each summer. I noticed out our garden gate that the time is now and boy howdy are those within my sightline looking gorgeous. 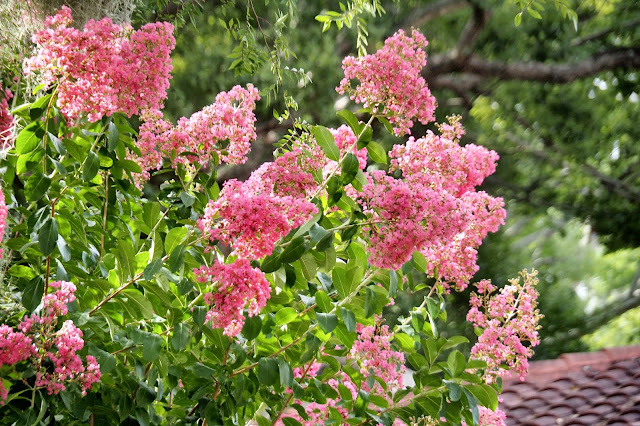 There are purple ones, hot pink. light pink, raspberry colored and white blooms. A thing of beauty is what they are. When I saw that they were, once again, showing their true colors I thought of myself. A clumsy metaphor maybe, but hopefully in the not too distant future, I will be showing mine as well.

To get us through the early days Bruce made a meds chart, keeping close track on what to take and when. 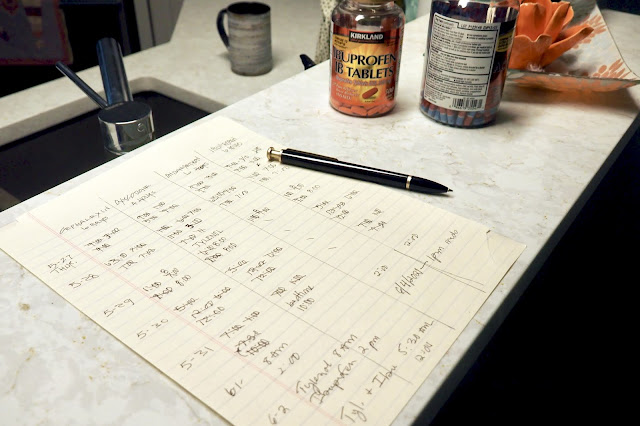 It brings me joy to tell you that after the initial days of horrible pain, it has, over the last couple of days, turned into a dull pain, kind of like a headache that hurts but a person can still function. Not that I am doing much, mostly sitting if you want to know the truth, but I am also happy to report that over the course of the last 73 days, I've gotten far better doing some things with one hand. Or maybe it's that I've learned to improvise? For example, when opening the peanut butter jar, I place it under my left elbow and open it with my right. This morning I asked Bruce to open the cellophane wrapper on the new loaf of bread because he is off with his friend Keith for much of the day. I tried hard to put the plastic tab for closing back on with no success. I think for the first time, Bruce tried doing so with one hand with the same result. Although his sympathy has been extraordinary throughout this ordeal, he discovered firsthand how hard it is doing the simplest of things with one hand.

To cheer myself up, I looked on Amazon for a super simple puzzle to occupy the long days indoors. 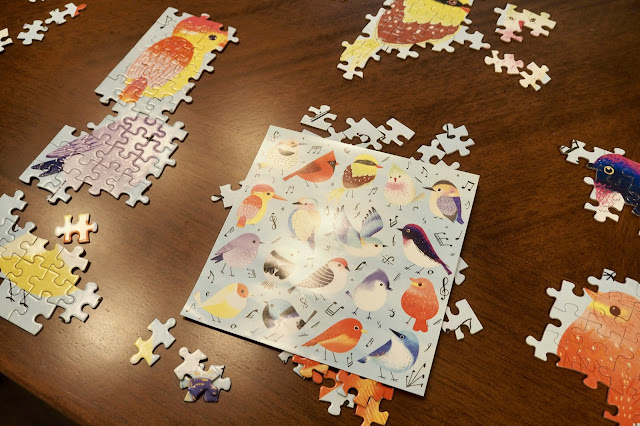 Haha, you probably guessed birds were involved! It is slow going and as so often the case, I'm struggling with the border pieces, but it is super cute, don't you think?

We are still waiting for the summer rains to begin in earnest. I'd not been outback for some time and seeing the water level so low surprised me. 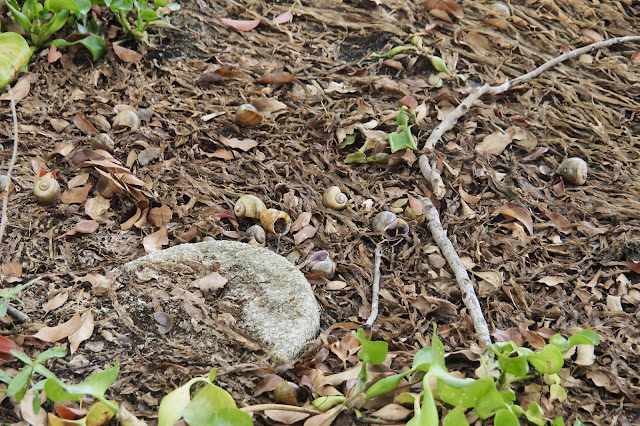 Loads of snails revealed, there's hoping that  the Limpkins took advantage of them when they were submerged. A silver lining might be that some of the invasive water hyacinth die off without water. That's nature for you, a balance of give and take. 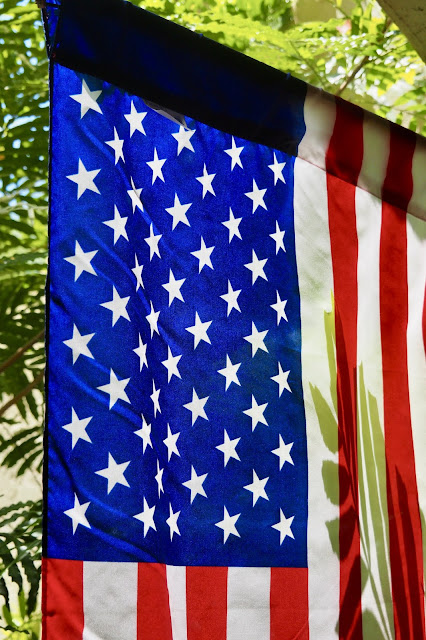 In a stroke of luck, the National Memorial Day concert on PBS came on after an episode of Grantchester concluded. Tears of both sorrow and gratitude were shed during the moving performances. Should you be interested, here is the info.

These days my biggest challenge is finding a comfortable way to sleep. During the day I am careful not to move my arm in ways that will cause pain, however, at night that is a hard position to maintain. Pardon the pun! I've tried multiple strategies, a few more successful than others. What I am counting on is having good news on Thursday morning and perhaps a more comfortable cast. The appointment time is 11:45 during which time the stitches will be removed and new x-rays taken to confirm the integrity of the plate and screws. I seriously don't know how I would react if anything were to go wrong. While I have not cried much, any bad news would surely bring tears. I must admit that Sunday I was feeling pretty sorry for myself, in part because I have curtailed outdoor activities, including walking until I receive the all clear on Thursday. Some might find that extreme, taking the directions so seriously, however,  I am not taking any chances having witnessed our sister Maureen go through two infections when she had a hip replacement. As you may recall, she has never walked since.

After my pity party on Sunday I revived on Monday, spending the whole day reading a novel our son-in-law Tom has written during the lockdown which in London has lasted much longer than here in Florida. My book report is thus: a compelling contemporary story tackling the issues of our day without a bit of brow beating to be found. In other words, I liked it very much and feel honored to be included in the "first reader" group. He now can add the term novelist to his ever growing list of talents.

This is probably the longest time in 10+ years that I've gone without using my camera. Speaking of which, it works just fine despite the sidewalk crash. I've tried to figure out how I broke my wrist again...did it hit the pavement? After all, my scapes were all on my right side. They are all healing, by the way. I suppose I will never know for sure but I do intend for Bruce to take me to the scene of the crime on Thursday when we go to the doctor. I need to look at that darn sidewalk!

If only I could have used my left hand to wipe the lens of humidity when this guy popped up out of the water. 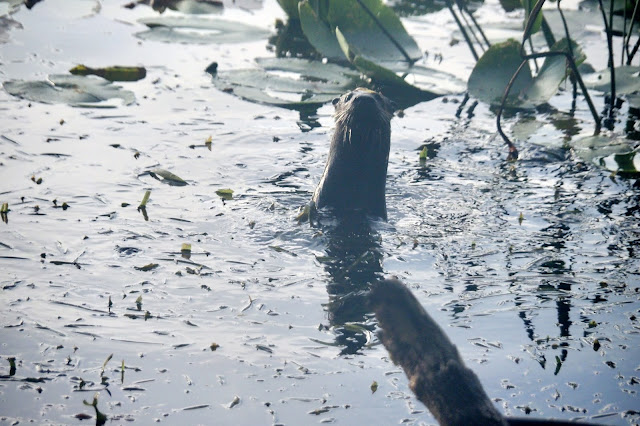 Until we meet again...