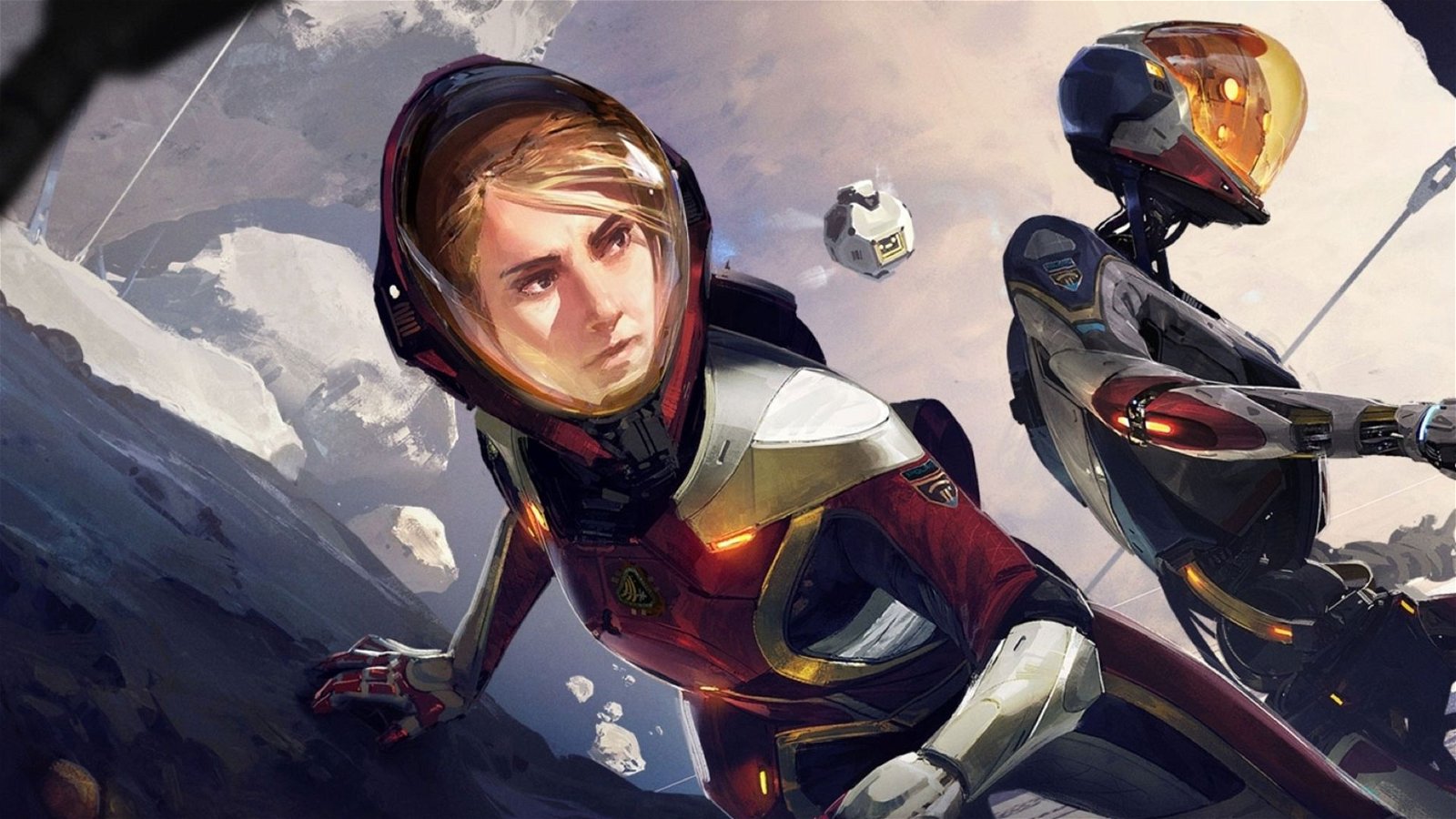 Lone Echo II made me remember the last time I was depressurized into space. There was a weird sense of peace and quiet floating in the atmosphere. A moment of awe, basking in Saturn’s magnificent presence. Then holding onto dear life as large debris smashed my space station to pieces.

This is the sequel which takes a foundation laid by veteran studio Ready at Dawn in 2017. To boldly go where no game has gone before in VR territory. While using the VR technology’s best qualities in an astronaut simulation that console’s just can’t replicate. Lone Echo II doesn’t just use this already great layer for space exploration. But takes the experimenting wheels off to focus on a mind-bending story-driven adventure with more action this time around.

The developers at Ready at Dawn are no strangers to making AAA games on different consoles. From sizing down God of War for the PSP, to pushing the PS4 to its absolute limits with The Order: 1886, Ready at Dawn used this flexibility to their advantage with Lone Echo and Lone Echo II. So much that every VR gesture feels natural and adds the closest feeling to being in space. That’s because Lone Echo II plays better – if not as identical to the first game’s zero-gravity controls.

Lone Echo II feels like VR’s defining space simulator, thanks to Ready at Dawn’s astronomical detail for physics. Tools, food and artifacts float in the air. Players can throw objects indoors and watch them bounce back. The developers have gone through considerable effort to replicate Tuesdays for Chris Hadfield. Players use this gravity to their advantage with the help of their fake bodies.

In space, players drift down corridors and indoor environments without using their legs Naturally, players would “swim” by pushing off any surface. It’s an incredibly smooth way to move around Lone Echo II’s space stations without much motion sickness. Players are also equipped with thrusters for acceleration and hand thrusters to adjust trajectory. The outdoor sections are incredibly open, giving me that vast freedom of the final frontier. I’ll even admit to wasting extra minutes floating outside for the sheer fun of it.

Like the first game, players become Jack. He’s an ECHO-1 android programmed to fly in space, withstand radiation and fix space vessels with built-in tools. This gives players a creative way to respawn after death and explore hostile environments. Mainly, players complete simple puzzles around the station. These are laid out as story missions scattered across Lone Echo II’s space complex.

Following an action-packed first half, players are released outdoors. Here, Lone Echo II takes a page out of open world games. Different areas contain levels that can be beaten in any order. Along the way, a number of side quests help enrich the plot and offer a fuller picture of that mystery. Sadly, these are skippable at most. While they add more of the same tasks already done in the main story objectives.

Ready at Dawn doesn’t exactly take full advantage of Jack’s gadgets. Rather, the game lays out a to-do maintenance list for players to complete. Even for a VR video game, the space simulator starts to feel like an actual job of sorts. But I won’t dismiss Lone Echo II’s immersion and authenticity for it. The game falls into old habits by relying too much on the older gadgets. Both the laser cutter and scanner are still used to open doors and activate things. But newer ones including a telekinesis grab and electric stun are reserved for a handful of moments.

This sequel still excels at spreading out its world-building with gameplay. Mainly hitting switches to reactivate the station’s various systems. Then listening to comms chatter with some hard — hitting info. Or unlocking a new wing to further the story. Scanning audio logs for progression clues. Lone Echo II continues building on a mystery as to what happened to a station – with a good pace. Players slowly solve and unlock their way to story nuggets which pay off.

“Lone Echo II continues building on a mystery as to what happened to a station – with a good pace.”

With a hard warning: Lone Echo II starts right where the original left off. I highly recommend players experience the original 2017 game before dropping into this off-world-building sequel. Ready at Dawn respectably stays committed to the first game’s plot and uses unresolved questions as new details. This works as a satisfying continuation after Lone Echo kept players in the dark with a cliffhanger.

More importantly, Lone Echo II consistently uses every character from the first for something new. Jack’s human companion, Captain Olivia Rhodes heads a space mining operation around Saturn’s atmosphere. They’re in better shape to tackle the unknown together. But work closer after one separation too many in Lone Echo. Ready at Dawn masterfully builds on the relationship of Jack and Olivia with real camaraderie against an empty universe.

But this game-changing cataclysm happens in the first Lone Echo. Turning their Kronos II space station into an isolated death trap. Both Jack and Olivia struggle to patch the ship while learning more about a time-travelling anomaly. Of course, Lone Echo II sees its sole survivors on the other side of that wormhole. And into a refreshingly new station to explore.

There’s a natural chemistry between Jack and Olivia, respectively played by Troy Baker and Alice Coulthard. They also serve as the only two main characters in the series, adding a bigger sense of wellbeing against all odds. I shared the same tension as Jack when Olivia was in danger. Or vice versa. It’s powerful to see the differences between Olivia’s priorities for Jack. Compared with Jack’s expendability as a radiation-absorbing android.

To keep Lone Echo II’s seven-hour length going, some of the same objectives start to pop up again. The game starts to suffer from repetition. It’s worst easily being a drawn-out fetch quests that come up before the story throws a twist. Or navigating through too many tunnels without touching some deadly obstacles.

“Lone Echo II can slightly become a survival horror title in some moments.”

Lone Echo II can slightly become a survival horror title in some moments. Starting with Ticks, the game’s only enemies. These amoeba-like creatures feed off energy, making them a nightmare for your android body. Just below the Headcrabs from Half-Life: Alyx, they are by far the creepiest. Little can be done when they latch onto you, making groups of ticks a real danger on sight. Of course, players have to rely on throwing batteries to divert them, or using electric cranes to gather them up in a corner. The game excels at using these extraterrestrial beings to throw a bit of Lone Echo II‘s space simulation off.

More importantly, Ready at Dawn uses some rare moments to take the player out of Jack’s body. Without spoilers, Lone Echo II flips the switch for PG-rated puzzle solving. These sequences are action heavy, particularly in the climax, when players are confronted with a bit of violence. But the game does a tremendous job of applying some force to stop the Tick threats. Even if the ending can be a mind—bending thinker.

As with the first Lone Echo, its sequel lacks replayability. There isn’t enough to bring players back after a bombastic story. At a premium price point, players deserve much better with different ways to re-experience the game. Especially since Lone Echo II has no Chapter Select to enjoy those favourite moments. Or a survival mode against the Ticks. The game packs something for everyone. But that variety is not offered at a player’s leisure since it’s all locked to that one story mode.

I owe much of this credit to Oculus, who published Lone Echo II as their final exclusive game for PC VR headsets. You need a mid to high level gaming rig for the best VR visuals to date. Ready at Dawn pulls every trick in the book to deliver near ray tracing lighting. Deep shadows to simulate that existential void of space. Even from a distance, textures on Saturn and hollow ships are crispy. It’s scary to think about the sorcery Ready at Dawn conjured up for Lone Echo II’s visuals. But players with Rift ready setups benefit from the studio’s hard work following a delay.

Lone Echo II marks the end of an era for Oculus’ original content for PC VR games. Ready at Dawn manages to tie up loose ends from their 2017 hit, but they do it with careful execution for an action-packed sequel. Players manage to ride different waves of genres across a sci-fi epic. At the cost of some fetch-quest fatigue and worse ways to bloat a game. Lone Echo II still stands on its own as a worthy addition to the Rift library. If you have the VR horsepower and a Link cable, this isn’t a space nine-to-five you want to miss.