Let Us Play Catch Up

by admin July 17, 2020
Let us begin with something amusing I saw on facebook today:
I told my luggage that we were not going on vacation this year.
Now I'm dealing with baggage issues.
Here's another funny one.....
You know what people don't talk about enough?
Masks.
I wish I knew everyone's opinion about them.
People are so darn clever, aren't they? So we started with something silly, let us continue with something pretty, shall we? It is hard to ever tire of seeing sunsets as they are all so unique. 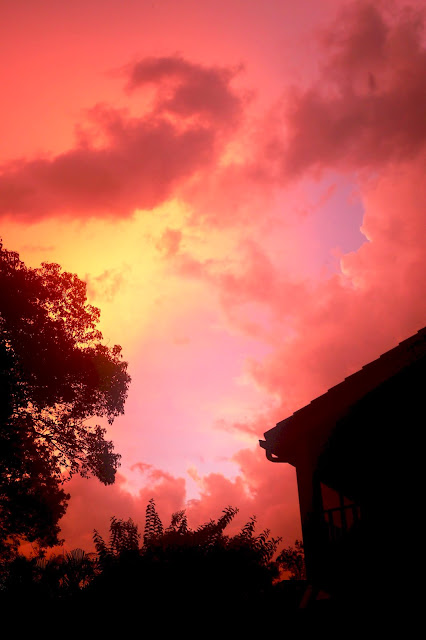 Which brings me to what news I have of Cris and for the most part, it is still not good. They are trying everything that they can, however, he seems not to be responding as well as was hoped for. As I type this, he is back in ICU after spending about a day in PCU. Tomorrow will be day 14 of his hospitalization and so far he is none the better for it, and possibly worse. The thing that is really so hard is the fact that no one can visit and he's either too weak to talk, or his breathing is so uneven, he can't. I cannot imagine how I would manage if I were in his families shoes. It has been such a roller coaster with ups and downs that have made it all the worse. Then again, it is super hard for all of the healthcare team, having to be exposed and while they do have protective equipment, that is hard too, wearing all that gear and a mask for twelve hours at a time. Let's just get real--it is awful all the way around.

And yet, life does go on.

Which is one reason I turn to nature to remain calm because it is a great reminder that life does go on in spite of the pandemic. Look at this amazingly cool mushroom I spotted on one of the big Camphor trees along the lake while I was searching for my, and you do note that I call it "my" owl, simply because I can! 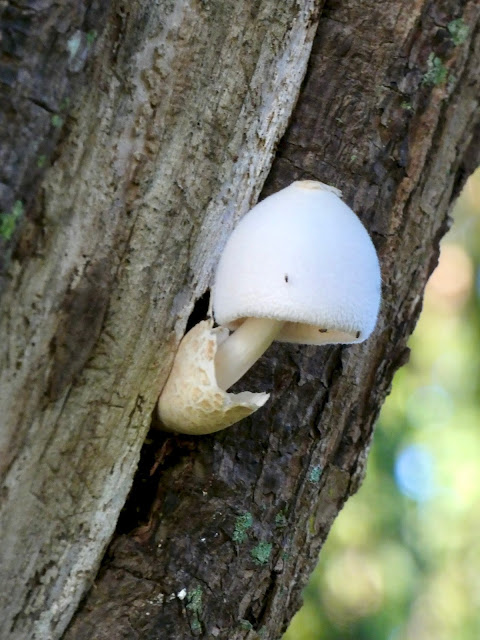 When first I spotted it from afar, I thought someone had put a white ball or something in the tree because that is what it looked like until I got close enough to notice the stem. Oh nature, how we love thee!
Nancy has been here for her week of vacation and she is now learning how the weeks speed by. She's often asked me what retirees do all day and now she has first hand knowledge in answer to her questions. Several days she has taken day trips alone to visit friends, but if she's been here, the pool has been quite the magnet. As you can see from the photo below, social distancing is easily accomplished. Those big storm clouds? They vanished! So Nancy is on the lounge chair to the right of the dock and one reason this photo is important, aside from the beautiful water and clouds, is the presence of a Mallard NEST in the round planter!!! Yes it is hard to imagine she chose that spot, but she did. On Sunday afternoon when I first learned of it, once she flew off the nest we went to examine it and almost missed the eggs they are so well hidden. 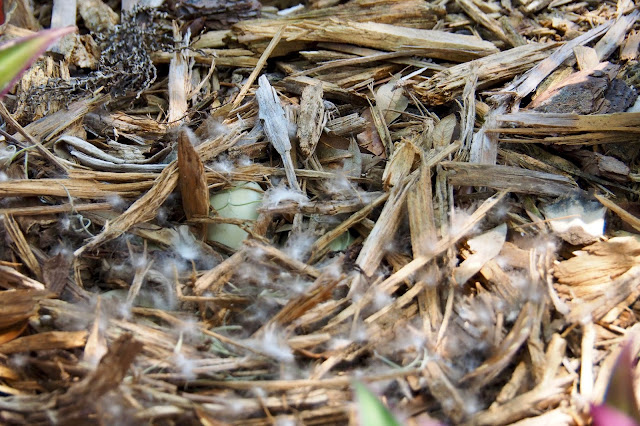 I can hardly wait for them to hatch, although the chance of me being there to witness it is, in the words of my late Mother, "slim and none."

Sadly, I finished reading A Gentleman In Moscow. I hate when a good book comes to the end, oftentimes because I want to remain in the created world. Nevertheless, as they say, all good things must come to an end, but before it did, I bookmarked a page that includes some thoughts that speak to our times, even though it was written several years ago. Check out  the third paragraph from the bottom if you can read it. 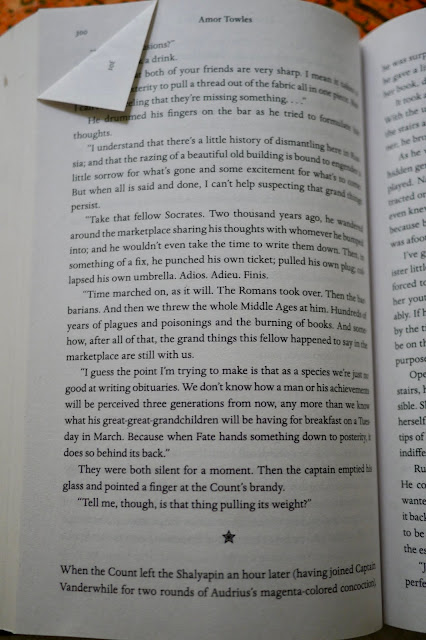 Maybe a week or so ago, we took advantage of the senior hour at Costco and oh my was it different. 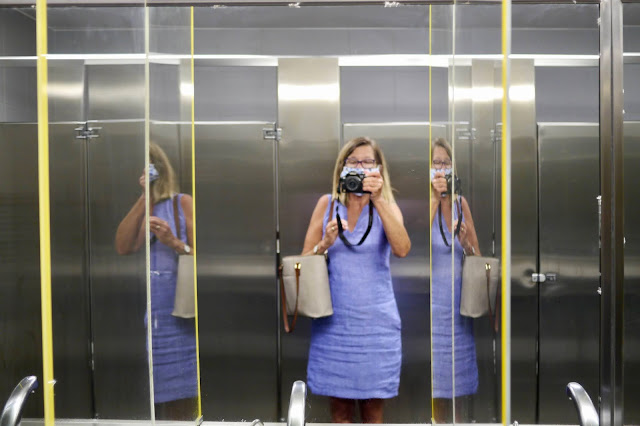 Those are plastic partitions between the sinks! Then when it was time to check out we discovered that they have staggered the registers. While I have been shopping at Costco for probably thirty years or so, not ONCE have I ever encountered lines like these. 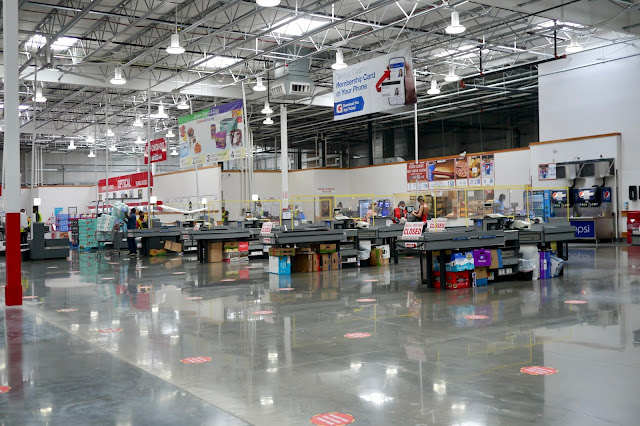 As in no lines! We bought a lot of stuff with both of us guessing how much the bill would be and both of us being off by a lot. It was good though because we stocked up on loads of things like electric toothbrush heads, new flatware, and the exciting purchase below. 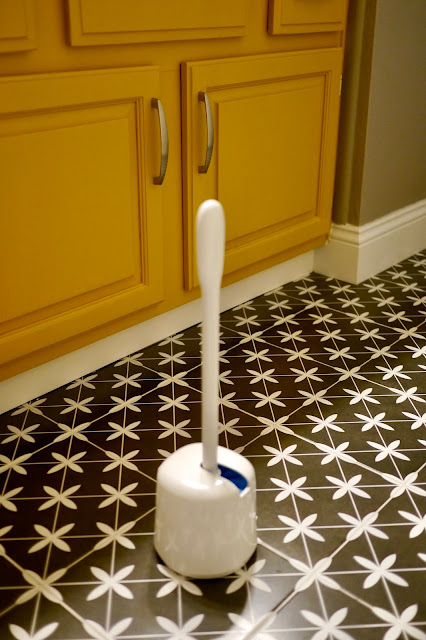 Now I know that a toilet brush does not sound like an exciting purchase but when it is made by OXO, well it is, and don't let anyone tell you differently. Their products are so fantastic with this one being no exception. You lift the brush and the handy lid pops up, you want to put it back and it closes around the handle. Having seen it on this list Nancy recently sent, well I knew it was for us. Exactly how this could excite me is perhaps a mystery to you, but if you, like us, have a low flow toilet you would easily see the appeal. I know it seems as if I were an OXO spokesperson and perhaps I should be!

We've had almost all sunny days this week so the puzzle has not been my focus for much of the week until late one afternoon Bruce was looking around for something to do. "I'd love for you to work on the puzzle because, frankly, I am at an impasse." Well he sat right down and finished up the bottom which had been giving me fits! Plus he got a bunch of the roadway done! Which then inspired me to refocus my efforts and I finished up the big tree. All that remains is the mountain with most pieces the same, but hey, I can climb any mountain, right? 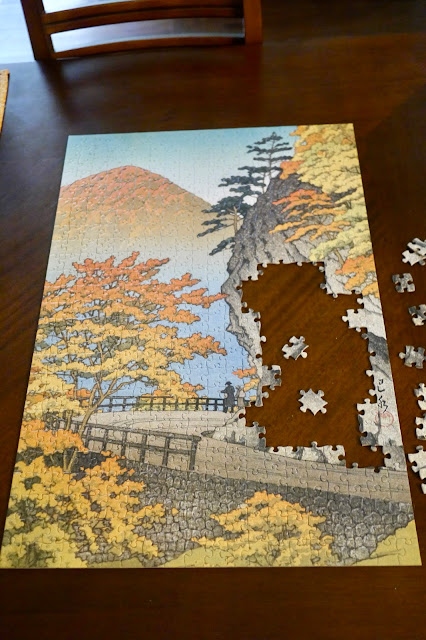 Instead of playing pickleball, one morning Nancy wanted to give kayaking a try. Before we got down to the lake Bruce had been fishing but came in to give her the confidence she needed as she was fearful of falling out of the boat. 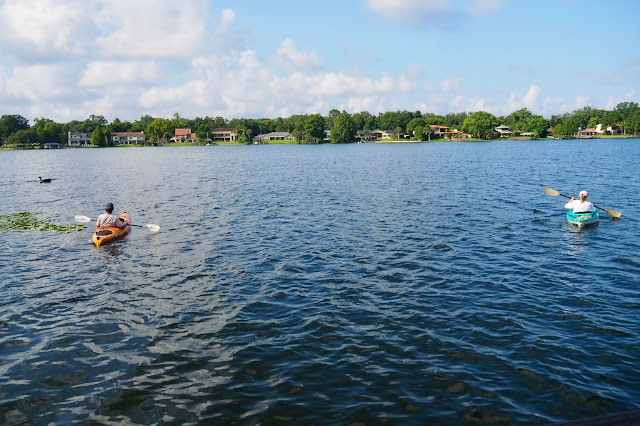 Before long she'd gotten the hang of it, paddling around the whole lake. 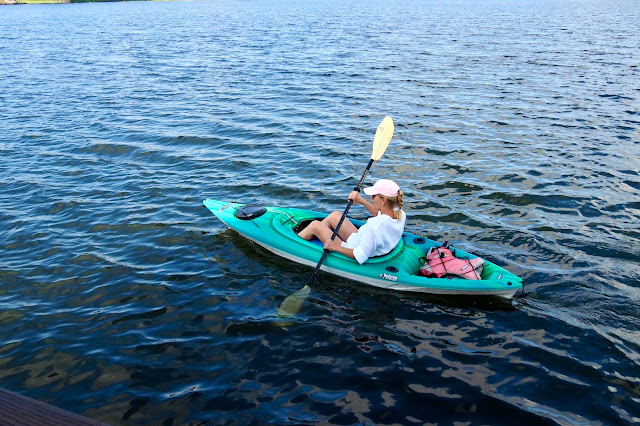 I mentioned that it is hard for healthcare workers and while it is not the same, retail workers are having a rough time of it as well what with rude customers and all. The stories she's told us since the store has reopened are hard to believe. While it has mostly been all fun and games for her during her visit, I did ask Nancy to cut Bruce's hair and it turned out very well. Yes, he can got to a salon now, but since our stylist is no longer doing hair, finding a replacement has not been easy. Monica was the best! 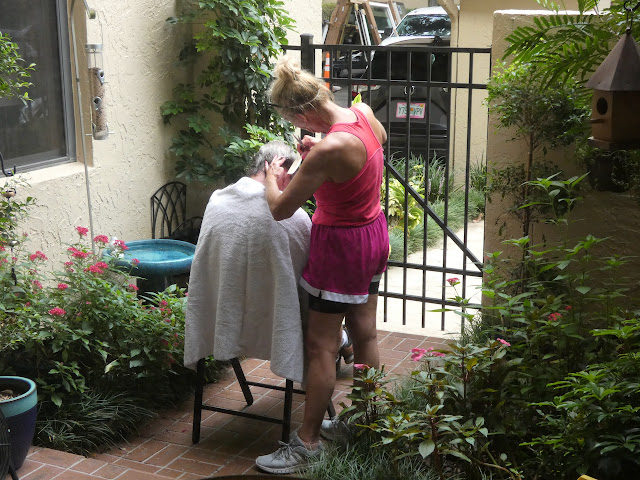 Because we planned to play pickleball in the evening, we took Nancy over to Lake Davis for a walk. While I was chatting with Candy about the visiting Egyptian geese (photos in my next post), Bruce spotted something in the lake. 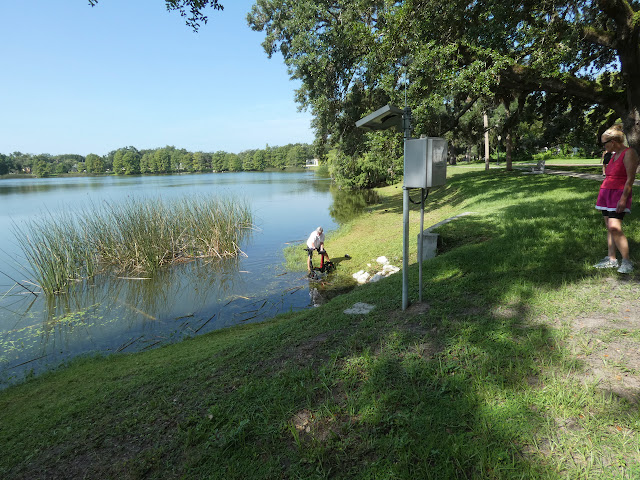 Well, as it turns out, it was one of those rental scooter things! 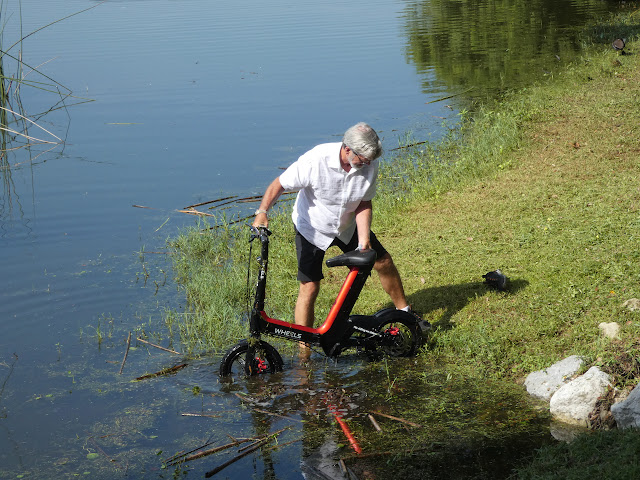 In true Bruce fashion, he tried calling the scooter folks without success, so he left it alongside the sidewalk rather than in the middle of the sidewalk, something we witnessed downtown today. Good grief folks....wear a mask and keep those scooters off the sidewalk! Just threw the mask thing in there mostly because both things seem so simple to me while some are making a big stink of it. Oy vey!

Today's post began with a silly joke about vacationing, something we all long for. And while technically we can go places now, it still feels very risky to me what with the Florida case numbers escalating. Instead, last week I went on a virtual trip through my photos, making a book about our cross country trip to Vancouver. It arrived yesterday and while I am mostly thrilled with it, I wish I'd chosen a different font/color for the text and title. 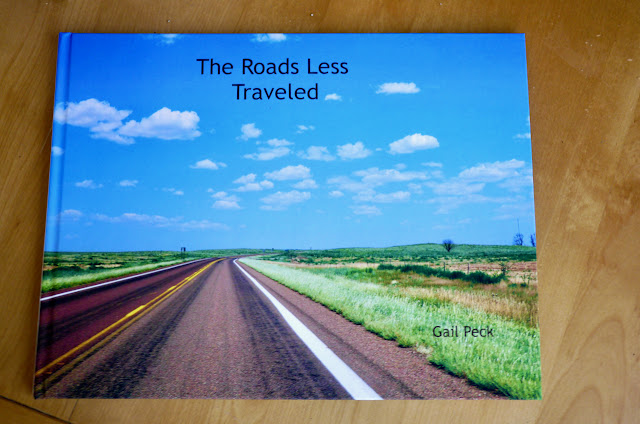 Nevertheless, it was a super fun reminder of how things were before all hell has broken loose. I highly recommend Mixbook and here's the link to their website should you like to do the same. While it is not cheap, they are offering some really sweet deals right now. I know I would certainly like one as a gift about a certain trip out West just before the pandemic hit. (hint, hint!) I bet you have someone who would like some of your photos as well.

So, that's all the news fit to print for now from 1236 (our address before I leave you wondering), tell me yours.