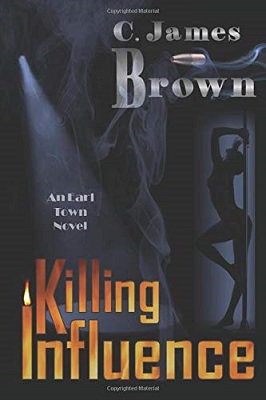 The timing of the seemingly unsuspicious deaths worries an aging mafia don whose granddaughter is a standout among Boom’s talent stable, so he hires PI Earl Town to investigate and Earl soon finds himself looking for clues among self-absorbed social media starlets, their fanatical parents, young social media entrepreneurs, rock stars, and gangsters.

Private Investigator Earl Town is asked to look into the deaths of two social media stars by a Mafia Don as their deaths seem suspicious to him and they were both represented by the same firm, Boom Productions, that represents his granddaughter and he’s worried for her safety.

Earl is out of his league with all these social media starlets, computers, internet, etc as he’s very old school but if he wants to get paid he has to keep digging.

Killing Influence is the second book in the Earl Town Series. I haven’t read the first and whilst I believe it can be read as a standalone, this is only the case if you don’t mind not knowing Earl’s backstory or much about him.

The writing took some getting used to as it is told from Earl’s point of view and reads like an old detective television series where the detective narrates everything that is happening and his thoughts on every little aspect of what is going on in his head. He’s very sarcastic and often opens his mouth before he engages his brain, but this worked for him and the book.

The plot was bang up to date given that it involved the world of social media and the darker side of it. It was refreshing to actually see a detective struggle rather than have all the answers all the time and need help from others with some of his investigations.

The storyline is filled with mystery which is what I would expect from a PI novel and it was intriguing to watch the pieces of the puzzle come together. If you enjoy private detective novels then I would recommend this book to you.

The above links are affiliate links. I receive a very small percentage from each item you purchase via these link, which is at no extra cost to you. If you are thinking about purchasing the book, please think about using one of the links. All money received goes back into the blog and helps to keep it running. Thank you.
Like us on Facebook – Tweet us on Twitter – Pin us on Pinterest