Jess
Halloween is almost here! So let’s get into the spirit with some fun and perhaps monstrous Kickstarters!

MonsDRAWsity is a wacky party game where 1 player will look at a monster for 20 seconds and then try to get the other players try to draw the creature by describing what they remember. This often leads to some wonderfully silly variations of the monster in question. When all drawings are complete the monster is revealed and the players then secretly vote on which drawing they think is the most accurate. MonsDRAWsity: Unusual Suspects is a new, stand-alone version which includes a host of new monsters designed in collaboration with the fine folks at Shut Up and Sit Down. 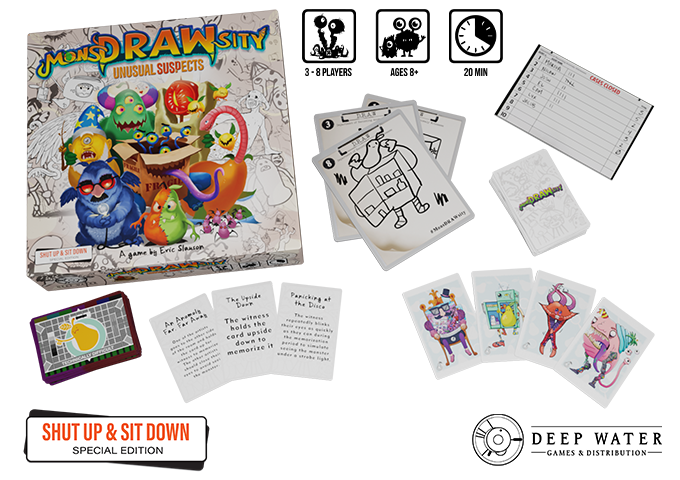 I played this game a while back and absolutely loved it. You don’t have to be an amazing artist. You don’t even have to have a really good memory. Really you just have to enjoy the goofy results created by your friends as you try to remember if a monster has 3 tentacles or 4. Check out MonsDRAWsity: Unusual Suspects on Kickstarter here.

Power Plants is a magical tile-laying game about wizards cultivating a garden to grow the ingredients they need for their spells. Each turn you will add a plant patch from your hand to the communal garden and then decide if you will activate the Sprout power or the all of the Grow powers of the patches adjacent to the one you planted. Grow powers are weaker than Sprout powers, but you can activate a lot of them at one time with a good placement. You can place sprite tokens on patches and at the end of the game each Field of connected patches of the same type will award points to the players with the most sprites on them. 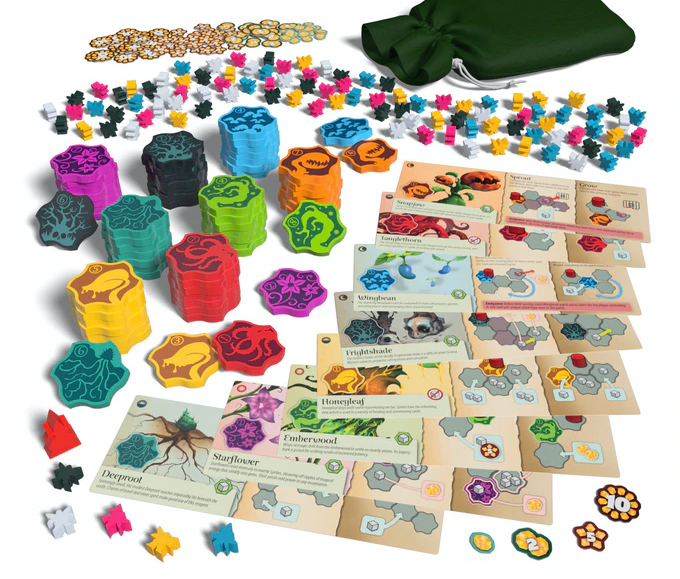 I really love the look of Power Plants. The colors are super vibrant and the silhouette artwork is really striking. I also love that you can build up some awesome combos with clever placements, but you have to balance that against setting up your opponents to nab those precious spots before you can. Learn more about Power Plants here on Kickstarter.

: The Board Game looks perfectly ooky spooky for the Halloween season. Based on the video game series, this cooperative, survival-horror game has players banding together to explore Spencer Mansion with all its terrifying inhabitants and mind-bending puzzles. The map of the mansion grows as you explore and if you’re not keen to open a door yourself, you can send a helpful NPC.  The game is played out either as a one-shot or over a campaign. In the campaign mode, the choices you make will have repercussions along the way so you have to be careful when deciding. Just like the video game, your inventory is limited and you may have to avoid fights here and there to conserve your supplies. As the campaign advances the danger will rise and you’ll need to face off against challenging boss monsters. 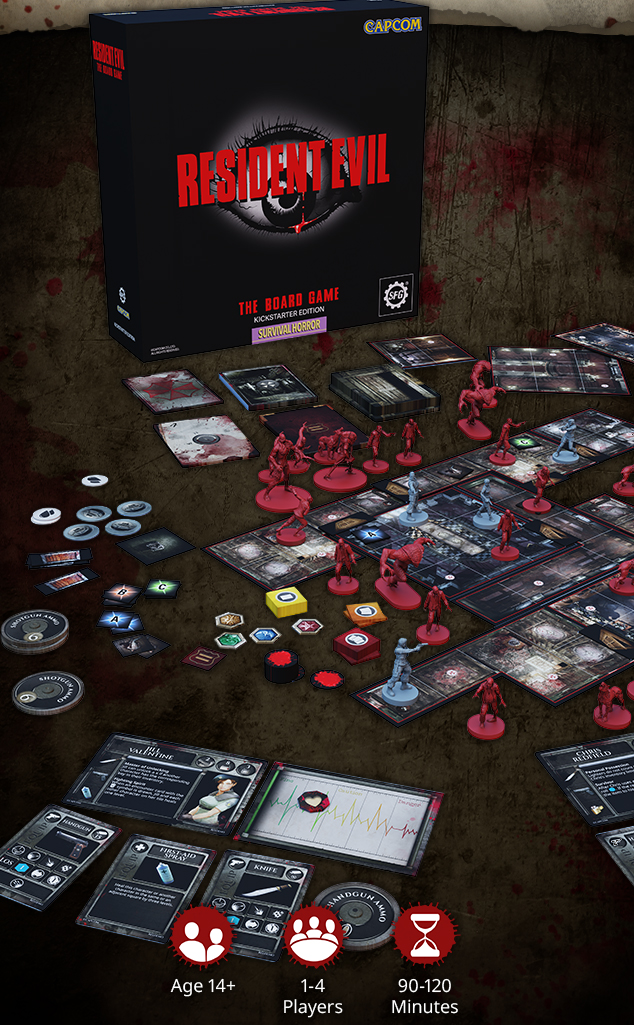 I love the Resident Evil series and getting to play as some of the classic characters with my friends sounds like a blast. There are a ton of gruesome zombies and mutants to pit yourself against and the minis look awesome! I love the giant shark! If you are a fan of the games or love a challenging co-op then make sure to check out Resident Evil

: The Board Game on Kickstarter here.

Skulls of Sedlec is a card-drafting and set-collection game about arranging skulls. In the game players take on the roles of Monks, digging up graves and placing skulls according to the deceased’s last wishes. The game is set up with 6 piles of face down cards. Each turn players will take 1 of 3 actions to either Dig, Collect, or Stack. When you dig you will flip over the top cards of any 2 piles. When you collect you will take 1 face up card from the graveyard. You can only ever hold 2 cards and if you have 2 cards at the beginning of your turn you must take the Stack action. To Stack means to place 1 card from your hand into your stack following the placement rules, building from the bottom up. Each skull in the stack scores differently for its type. This Kickstarter not only will fund the reprint of the game, but also all of the 8 expansions which add new skull types to complicate your monk life. 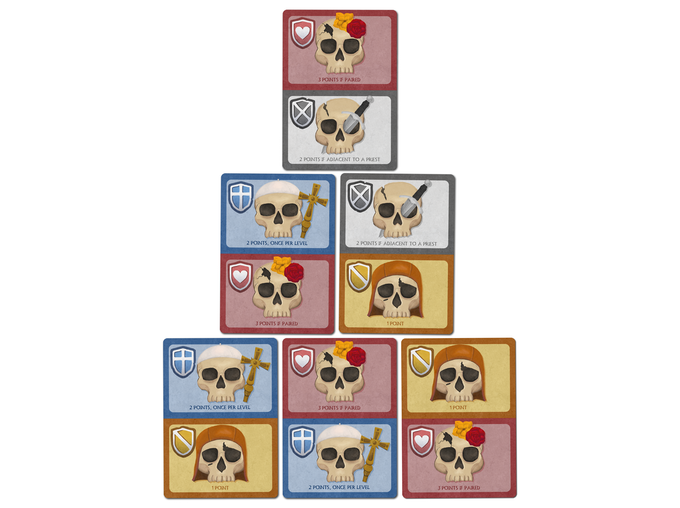 Skulls of Sedlec is a gruesome little logic puzzle that looks delightfully challenging. The expansions add a ton of new options and I love the addition of the solo expansion which adds the additional hurdle of trying to match specific arrangements to win. Head on over to Kickstarter here, to learn more about Skulls of Sedlec.

Ok this one doesn’t really have ghosts or ghouls in it, but it does have kickass Marvel superheroes. In the game you and your opponents will take on the roles of some of the most popular heroes and villains from the Marvel Meta-verse. Each character has their own unique abilities and customer dice. On your turn, you roll your dice and allocate them to activate abilities  to fight your opponents. As you play you can use upgrade cards to boost your powers and action cards to manipulate the dice. If you manage to take out your opponents you win! 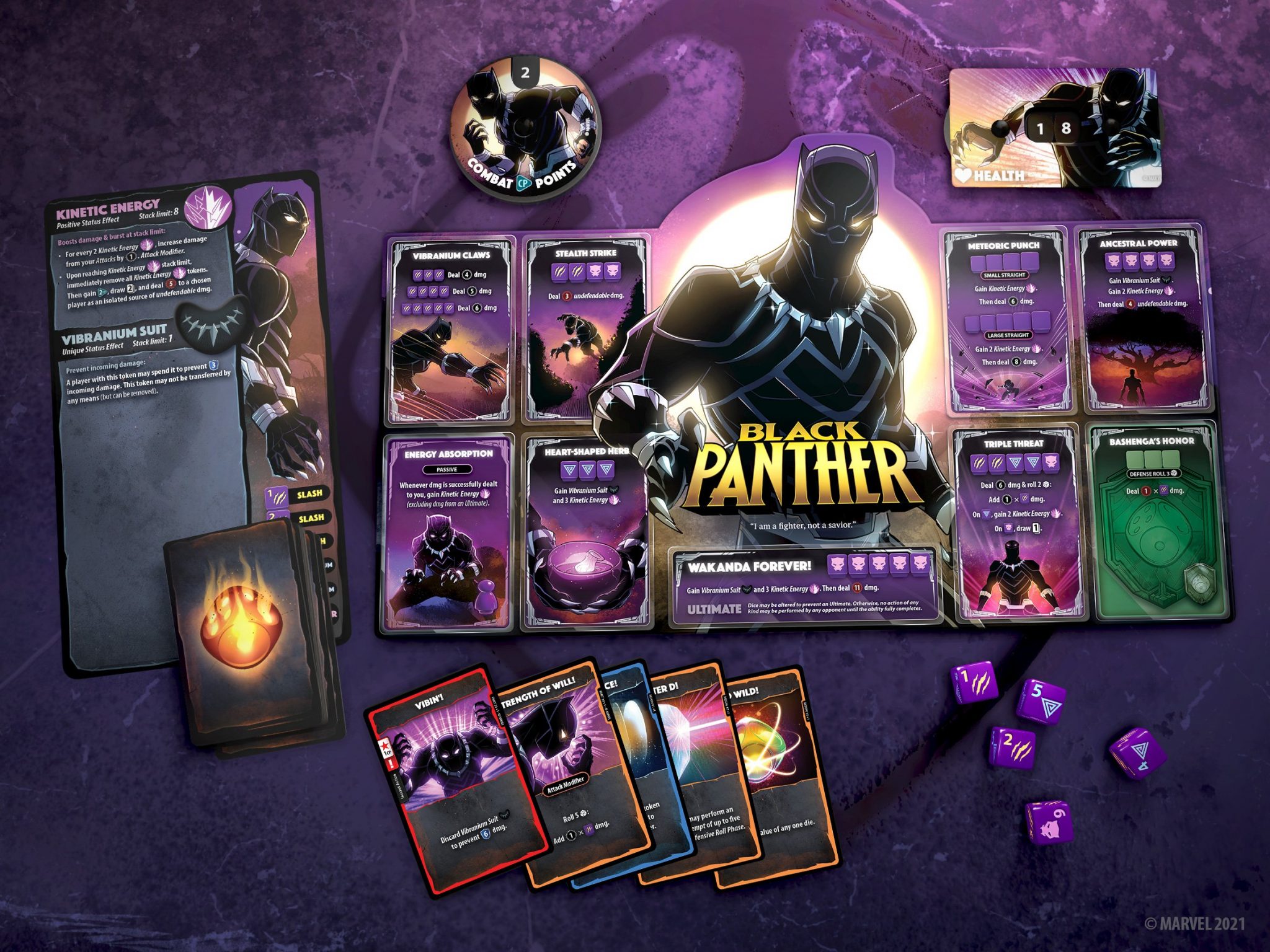 We are big fans of Marvel and the Dice Throne series as you can see in our Game in a Minute on Dice Throne so I am really excited to see how this version plays. I love that they chose to feature characters like Miles Morales, Scarlet Witch, and Black Panther and the art really captures that comic book feel. Want to see more? Check out Marvel Dice Throne on Kickstarter here!

What Kickstarters are you backing this week? Let me know in the comments below and check back next week for more fun projects!

The post Jess’s Fave Five Kickstarters of the Week 10/29/21 first appeared on Gameosity.
Back to Feed
Use left/right arrows to navigate the slideshow or swipe left/right if using a mobile device