How The Boys Gets Around A Big Game Of Thrones Problem 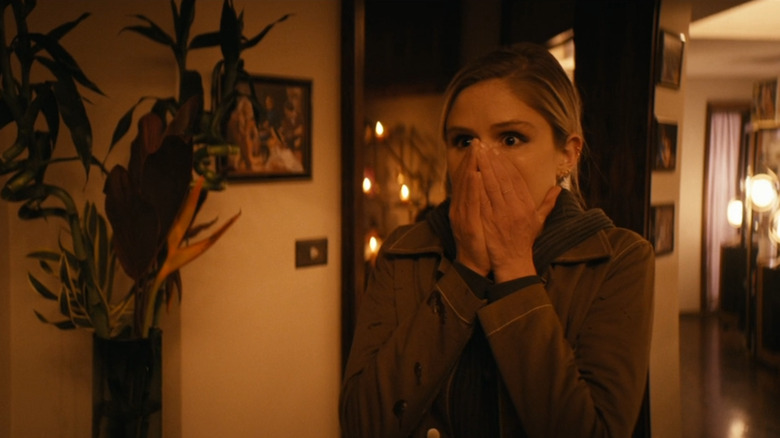 With this week's very explicit episode of "The Boys," it's worth taking a moment to look back at the last big TV show that was famous for its heavy amount of nudity: "Game of Thrones." (Okay, so there is also "Euphoria," but that's a whole other can of worms.) Before the epic fantasy show was being bashed for its poor plotting and questionably-concluded character arcs, the big recurring complaint critics had about it was the way showrunners used sex and sexual assault, particularly when it came to its female characters.

Often cited is the constant sexposition throughout seasons 1 through 3, in which the show would shamelessly throw in a naked lady or two to make a potentially boring info-dump more interesting for the fellas at home. But perhaps most damning was the show's apparent obsession with sexual assault. Nearly every major female character is either threatened with rape at some point or is actually raped on screen.

The books were also heavy on the rape scenes, but the show had a tendency to downplay the books' social commentary and ramp up the shock value. You can see this most clearly in the scenes that only happened in the show. One critic pointed to the episode where King Joffrey "demanded at the point of a crossbow, that prostitutes bludgeon each other for his enjoyment" as the moment she gave up on the show. Scenes like that one "made it clear that Thrones was a show willing to mount its action upon the stage of women's bodies." Joffrey torturing those two women in early season 2 is a textbook example of being gratuitous; it served no purpose to the show other than to confirm that Joffrey was a sadist, which we already knew. 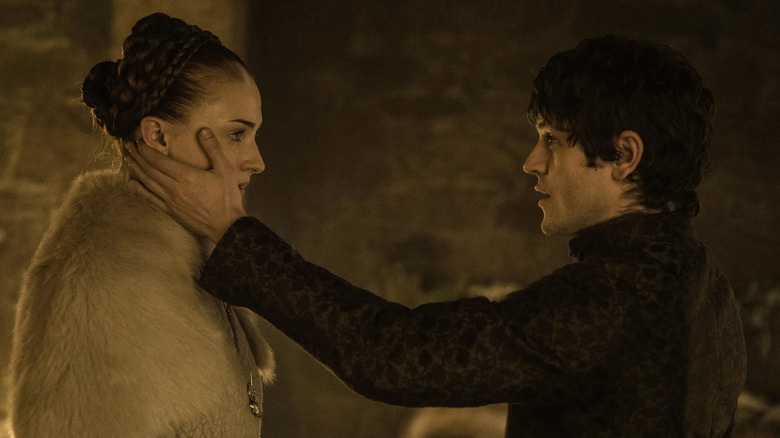 Probably the best example of the difference between "Game of Thrones" and "The Boys" is the way each show went about the assaults of Sansa (Sophie Turner) and Annie (Erin Moriarty). It's not a perfect parallel: Sansa had been on the show for five seasons before she was raped, whereas this was Annie's first episode. They're similar in that they were both controversial -- most people who gave up on "The Boys" in the first episode tend to point to this scene as the reason why -- and they're each given a lot of weight in the narrative.

The difference is that Sansa's rape scene wasn't in the books. At this point in the books, Sansa was still chilling in the Vale, pretending to be Littlefinger's bastard daughter Alayne. She had to deal with some creepy flirtations from Littlefinger, but that was the worst of it. Meanwhile, Annie's rape scene was not only in the source material, but it was far, far worse in it. Whereas the show has Annie getting coerced into oral sex by the Deep, the comics has her getting forced into it by Homelander, Black Noir, and A-Train at the same time. While the scene is treated seriously in the show, the comics really seem to play the situation as more of a comedy, which makes the whole thing feel far grosser than the show's version.

From the first episode, "The Boys" was downplaying its source material's sexual violence, whereas "Game of Thrones" was constantly ramping it up.

The other notable thing about Annie's scene is that it almost wasn't on the show altogether. "One of the first questions we discussed when taking the project is: Are we going to do the moment when Starlight is sexually assaulted?" showrunner Eric Kripke explained. "And even this was a year or so before the Me Too movement. I was nervous. I thought it might be too far. But every female producer on the show said, 'You have to do it, because we've all experienced a version of it to varying degrees in our careers.' And I said, 'All of you?' And they said, 'All of us.'"

So, the writers took a scene from the comics, had it play it out in a more interesting and less gratuitous way, and then used it to develop a season-long storyline in which Annie goes public with what happens. It created what may have been one of the most relevant TV shows during the beginning of the Me Too movement, as season 1 commented on it in a way that both paid respect towards victims of assault while critiquing the way the corporate PR world responded to these types of scandals.

Season 2 followed along the "sex as satire" route with the relationship between Homelander and Stormfront. With their relationship being a metaphor for the police intermingling with white supremacists, it makes sense that their sex scenes were some of the most absurd (and most depraved) scenes in the whole show.

Just Imagine If Homelander Was On Game Of Thrones 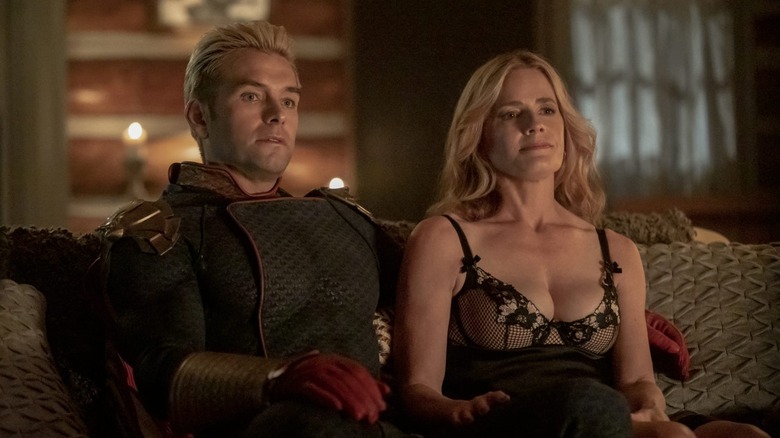 Perhaps the best example of "The Boys'" comparative restraint is the way that Homelander, while certainly a rapist, rarely actually threatens a female character with rape. His sex scenes on the show are weird and unsettling, but they're undeniably far more creative than most of what we've seen on TV. It's hard to consider his scenes with Stillwell in season 1 as strictly consensual, considering the massive power imbalance, but these scenes are laden with so much subtext about Homelander's psyche.

Meanwhile, you can go back to most of the sexual assault scenes of "Game of Thrones" and look at what the scene is telling us about the rapist in question. Often the show would feature a minor character abusing some serving girl for seemingly no purpose except to establish that he's a bad guy, so that a character like Arya or Jon or the Hound can murder them and the audience will feel good about it. Sansa's rape scene is the same thing, but bigger: it exists to further establish Ramsay as an evil character so that it'll be more satisfying later when Sansa feeds him to his dogs.

Homelander's evil is put on display constantly throughout "The Boys," but the way the writers go about showing his evil is far more creative than anything "GOT" showrunners Benioff and Weiss ever came up with. You can call Homelander's many acts of sadism over the series disturbing or frustrating, but you can't call them lazy writing. Season 3 set up a dynamic between him and Starlight that could've easily, in the hands of Benioff and Weiss, resulted in a rape or attempted rape scene, but the show wisely avoided going in that direction. 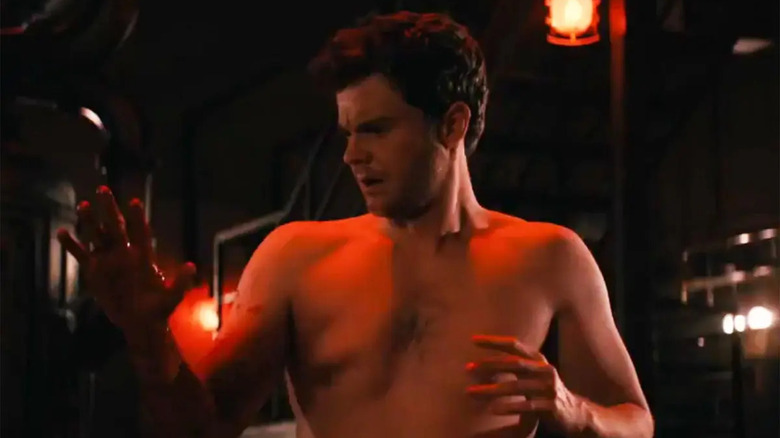 If you came into season 3 of "The Boys" thinking "this show is good, but I just wish they'd show us more of Jack Quaid's ass," you're in luck. The fourth episode of the season introduces the plot point of Hughie having the ability to teleport. The show easily could've established that Hughie's clothes would teleport with him and most viewers wouldn't have had any trouble suspending their disbelief. Instead, the show goes out of its way to have nudity be an unavoidable cost of Hughie's powers, and commits to it for the rest of the season.

It's not that "The Boys" is more shy than "Game of Thrones" about nudity; in fact, they're just as willing as the latter to include sex and nudity that doesn't strictly advance the plot. The difference is that "The Boys" is both far more willing to show male nudity (enthusiastic about it, even), and almost all of their sexual content is meant to be funny or disturbing, usually both. The sexual content on "The Boys" is typically designed not to titillate the audience or as an easy way to establish that a character's bad, but as a way to explore how being a supe would affect someone's sex life. For a tame example, the Deep having gills makes it so he always wants to have his shirt on during sex. For a less tame example, a character with ice powers can accidentally freeze a man's penis so severely that it snaps off.

The Right Kind Of Unnecessary Sex

In a media landscape where people are constantly debating whether a sex scene is strictly necessary or not, "The Boys" understands that it doesn't have to be completely necessary. Sex is an inherently interesting, complex thing, one of the few parts of life that can't be explained rationally. We can understand why people rob or kill, but we can never know for certain why Homelander has a breast milk fetish. (Yes, he grew up without a mother, but that only provides one piece of this horrifying puzzle.) It makes sense why a story would want to dive into this part of a person's life, regardless of how uncomfortable it might make some people in the audience.

The problem with most of the sex scenes on "Game of Thrones" wasn't necessarily that they were uncomfortable or extraneous, but that they were all kind of the same, weren't they? Littlefinger monologues while two women have sex in front of him. Viserys monologues while his naked servant girl takes a bath with him. There's a lack of imagination here that makes these scenes kind of depressing, whereas the arguably gratuitous sex in "The Boys" is nothing if not creative. Even at their weirdest and most graphic, you can tell the writers put a ton of thought into what you're seeing. And when sex on "The Boys" does feel depressing, it's a purposeful decision.

When /Film's own Witney Seibold wrote a defense of sex scenes on TV and film, one of the points he made was that when sex is depicted as an imperfect, often awkward or silly act, it helps to destigmatize it. "Not all sex is perfect, and more sex scenes would allow for a moment of embarrassed vulnerability wherein two partners can openly talk about how what they did might have been awkward or just a bad idea."

In contrast, the "normal" sex scenes between characters like Annie and Hughie -- where superpowers aren't a major factor -- often come across as unflinchingly wholesome in comparison. Whereas the sex in "Game of Thrones" is almost always linked to someone's quest for power or dominance, the non-supe-focused sex scenes in "The Boys" are some of the only moments where the characters feel safe.

As "The Boys" grows in popularity, it provides an interesting showcase for how nudity, sex, and sexual assault are depicted on mainstream television. "The Boys" probably couldn't get away with "Game of Thrones'" early treatment of women, even if they wanted to. And though there's nothing inherently wrong with depicting these things on TV, the intelligence in which "The Boys" goes about them -- and the occasional restraint -- are definitely appreciated.

Read this next: The 15 Most Anticipated Comic Book Movies And Shows Of 2022, Ranked

The post How The Boys Gets Around a Big Game of Thrones Problem appeared first on /Film.