How Singing Heals: A Canadian’s Experience Singing Backup for Bowie

In this excerpt, she reflects on a career highsinging backup for David Bowieat a time when loss, confusion and grief dominated her life, and how she reconnected with her younger, optimistic self.(Related: How Singing Can Raise Your Spirits) 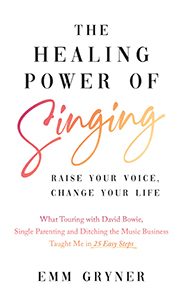 Excerpted from The Healing Power of Singing: Raise Your Voice, Change Your Life (What Touring with David Bowie, Single Parenting and Ditching the Music Business Taught Me in 25 Easy Steps) by Emm Gryner. by Emm Gryner. Published by ECW Press Ltd. www.ecwpress.comNext: How Losing My Tongue to Cancer Helped Me Find My Voice