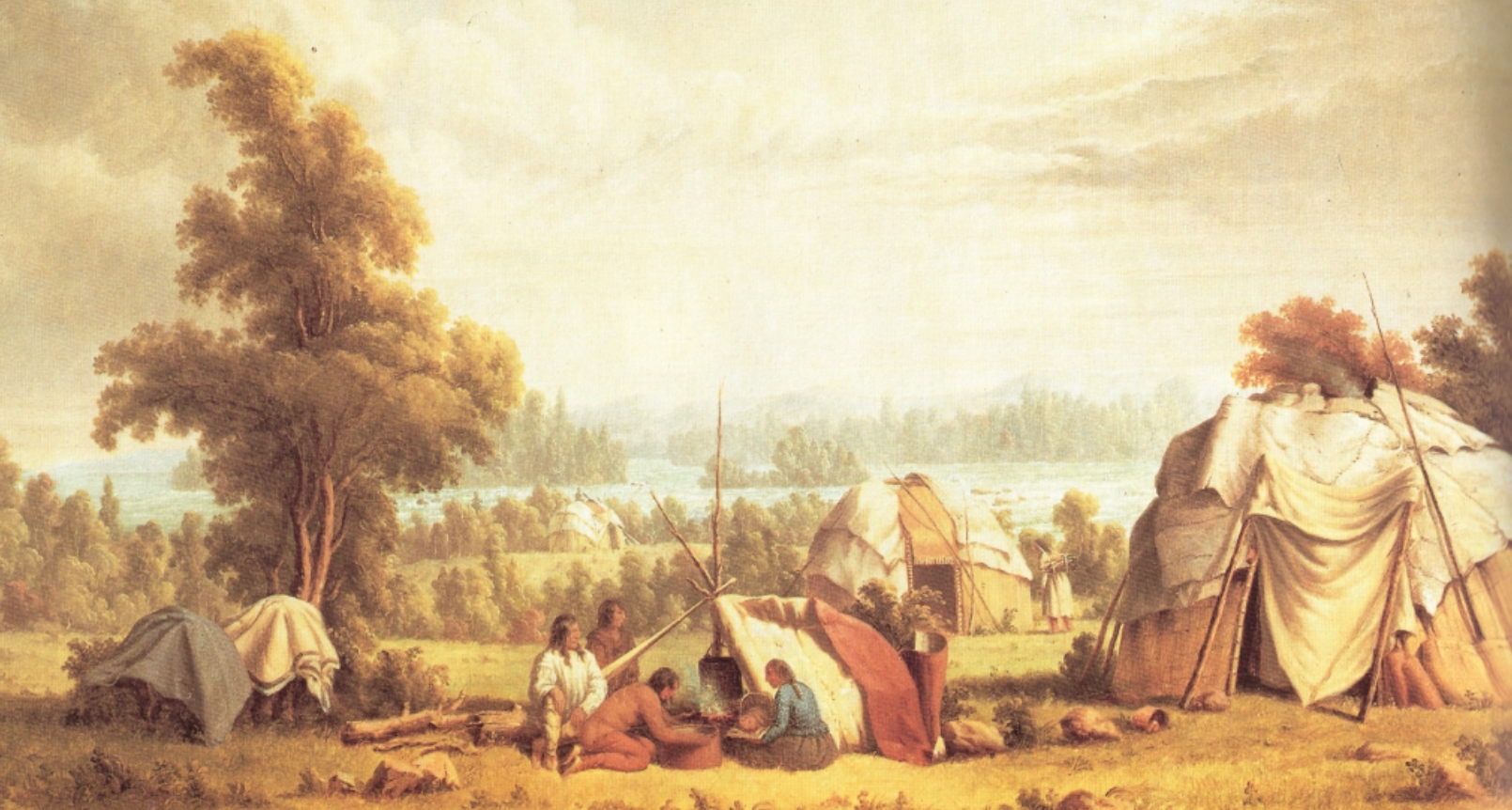 I’m not the only one who finds Henry Rowe Schoolcraft, a self-taught forerunner of modern anthropology, rather abrasive. Even his biographer comments on his “personal coldness and fundamental lack of compassion.” It’s not a personal matter to say that the public actions of an unquestioning functionary of U.S. colonialism were bad—but looking deeply into the contexts and contingencies of an individual life breeds a different feeling of mingled familiarity and revulsion, the fascination that comes with seeing someone’s mundane choices set in the harsh contours of their world.

In his official capacity as an agent of the United States Indian Bureau in Michigan from 1822 through 1841, Schoolcraft negotiated the Treaty of Washington that ceded 14 million acres of Ojibwe and Odawa land, and the Native groups involved do not remember him fondly. He also published copiously as an expert on Indian languages and cultures, using material furnished by his Ojibwe wife, Bamewawagezhikaquay (Jane Johnston Schoolcraft), and her family. He framed this ethnological material in keeping with his official role as an agent of Andrew Jackson’s Indian removal, presenting it as evidence that Indians “existed so completely in the hunter state as to have no relish for any other kind of labor,” and thus would be destroyed by “their own idle habits, vices, and short-sightedness.” It is unlikely that his informants wished to make this point by sharing their stories.

This was all simply business for Schoolcraft, the business of making a career and securing reputation and power as a white man on the American frontier in the nineteenth century. He appears in a book I wrote to illustrate the intimate betrayals behind colonial knowledge production. His venture was an ambitious one for a man without connections or education, always anxious to conceal his inadequacies. From his teenage years apprenticed in his father’s glass factory, Schoolcraft was steeped in America’s nascent market culture where manhood and identity depended on business success. He was hardly alone in living a life defined by the masquerade of confidence and the persistent shadow of failure.

The collection of Ojibwe stories that Schoolcraft would later preface with his derisive assessment of “the Indian mind” began in a happier place. These were the stories that Henry and Jane Schoolcraft, and Jane’s extended family, shared in the long, dark evenings of frigid Great Lakes winters. In 1822, after years of striving and failing in various lines of business, Henry won the office of Indian Bureau agent at Sault Ste. Marie, in the Michigan Territory. Henry and Jane married soon thereafter, both lovers of poetry and by all accounts bound together by the deepest affection.

They began translating and recording local tales in a handwritten magazine shared with a small circle of friends. In a manner characteristic of American market culture, Henry realized that this “fund of fictitious legendary matter” could have value for his career, which also meant security for his growing family. Jane became his key collaborator in writing, editing, and translating from Ojibwemowin, a language which he never mastered.

There’s a salutary quality to exploring the production of badness, perhaps humanizing its origins, but ultimately presenting an unambiguous descent into depravity.

The United States, in forcing Native peoples off their land, had created a destitute population that needed to be managed, and the key to managing Indians, Schoolcraft promised from his first book onward, was understanding them. This was an early intimation of anthropology as a humane alternative to military force. None of his racist theories or manifest destiny rhetoric are surprising for an ambitious government official in the Jacksonian era, though his proposals for Indian removal were not aggressive enough to satisfy U.S. legislators.

Jane’s family may have felt both proud and offended when his book with their stories came out; at least one contributor felt exploited. Jane’s brother William demanded a share of the royalties which was never given. Their conflicts revolved more around patronage jobs (Henry staffed his office with relatives) and Henry’s egregious mishandling of the family’s money than around his publications. But the intimacy of his position makes it read like a betrayal.

There’s nothing intimate about Schoolcraft’s books, which speak in the omniscient voice of the scientist. One can regard such works with forensic interest, as one looks at the grim evidence needed to solve a crime. It’s only because he obsessively saved all his letters and notes that his everyday life is fully visible: we can register the frustration of his plans to “civilize” the Native populations in his charge, and see him gradually turning his racial outlook on his own wife and children amid their personal struggles.

The literary scholar Robert Dale Parker, who brought out the first edited volume of Jane’s writing in 2007, is careful to defuse the easy interpretation of Henry as a monster who exploited Jane. However unusual their marriage, it was quite typical for a woman to serve as her husband’s uncredited literary collaborator, and for men to leave household management to their wives amid business travel. It was common for women to become addicted to medicinal opium after an illness, as Jane did. These were sources of great unhappiness in the Schoolcraft family, yet Parker wants us to see the persistence of duty and affection as equally significant. Under this gentle corrective I wonder if I’ve been writing with Schoolcraft’s “fundamental lack of compassion,” rendering judgment where one must offer neither praise nor blame.

Writers of history are often attracted to perpetrators of great evil, spawning an abundance of literature on Hitler and serial killers, for instance. There’s a salutary quality to exploring the production of badness, perhaps humanizing its origins, but ultimately presenting an unambiguous descent into depravity. Then there’s the pastime of reevaluating “great men,” the likes of Andrew Jackson, whose genocidal legacies historians used to celebrate or ignore.

Out of some other perversity, I’m drawn to people who are minor, frustrated, desperate and grifty; eccentrics who harassed their peers with idiosyncratic theories, boring technocrats with strange preoccupations, and fringe researchers who both disdained and demanded admission to the fraternity of science. These characters can be subversive tricksters and stubborn iconoclasts. Others, like Schoolcraft, aspired to serve the nation and economy—the ticket to the power and wealth that they were temporarily lacking. They tend to be verbose, and poring over the effluvium of their lives is both incredibly tedious and weirdly satisfying. This is why I picked up the trail of Henry Rowe Schoolcraft while looking into an 1838 archaeological hoax in Grave Creek, West Virginia.

Have I understood more, or less, because of how angry Schoolcraft makes me?

In a series of papers on a purportedly-ancient stone inscription there, Schoolcraft asserted his mastery of ancient Greek, Celtic, and Hebrew, and confidently identified the inscription as an example of ancient Icelandic Runes. He knew none of these languages. The stone was carved by a town doctor hoping to recoup his losses from a disappointing archaeological dig. Why had Schoolcraft, a bureaucrat with a modest scholarly reputation for his Indian tales, taken what looked like a mad risk, staking his integrity on unfamiliar alphabets? I had to solve the puzzle because he seemed to be both the victim of fraud and a fraud himself, a position practically emblematic of modern American subjectivity.

I found that, when he took up the banner of the Grave Creek stone, Schoolcraft had just been fired for corruption from his post in the Indian Bureau, and was hustling for the attention of scientific tastemakers in New York and Washington. His first book never turned a profit, nor would any of his subsequent tomes; his family was living on credit and he needed a job, a publisher, anything to put money in his pockets. If he could translate the fake stone, make it speak the sensational story of an ancient European journey to North America, he might win some opportunities.

Instead he lost his wife, the source of his most authentic literary material. Jane died unexpectedly at age forty-two, after traveling to stay with her sister in Ontario while Henry went abroad bearing his report of the Grave Creek stone. In what turned out to be Jane’s last years, Henry had found religion and become even more rigid and dogmatic in his views towards Indians, who he feared could never learn true Christianity.

Robert Dale Parker reminds us that religious revival swept the country during this time, with Jane, too, taking up an earnest examination of faith. Yet it was Henry who deigned to instruct his wife, raised in the Protestant church, on “the necessity and importance of a Christian life,” and who later commemorated her as the writer of “many pretty pieces, which I have carefully treasured.”

Have I understood more, or less, because of how angry Schoolcraft makes me? His use of real and fraudulent voices drives me to examine my sources, my interpretations and inferences, the way I speak for the dead. People who pursue undistinguished careers, who hover between confidence and fear of failure—and people who publish books—are often instruments of vaster powers. It’s natural to dislike what is repugnant yet familiar, the ethical risks of authorship and the tools of research bent to an opposite purpose than my own. Still, the fascination of drawing closer and looking deeper is not to find monsters, but to trace the latticework upon which ordinary kinds of exploitation grow. 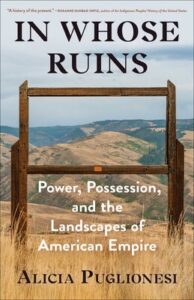 In Whose Ruins: Power, Possession, and the Landscapes of American Empire by Alicia Puglionesi is available from Scribner, an imprint of Simon & Schuster.