Grief & Crime: Mysteries To Read After DEAD TO ME

A version of this post originally published in Unusual Suspects mystery newsletter. Sign up for reviews, adaptations, news, new releases, and much more mystery & thrillers!

I really love the Netflix crime show Dead To Me, starring Christina Applegate and Linda Cardellini; without giving any spoilers, the second season really feels like it dropped at a time when many viewers themselves are dealing with grief (related to “a collective loss of normalcy” caused by the pandemic).

There is something to be said for, at the very least, acknowledging grief, which is a strong theme in the dark comedy Dead To Me and why I took the major themes of the show (grief, found family, secrets) and found great crime books also exploring those things. For readers who are about to nope-nope-out because you’re only here for entertainment/escape to cope, don’t worry! I have a fun book in here, and I promise the rest are not heavy books that will make you feel even more weighted than you may already feel. For spoiler reasons I won’t be focusing on the secrets in the books—but they are there…

I’ll start with the fun book for those already hesitant about this theme. This is a great read for fans of puzzle books, pop culture and literary references, and especially The Westing Game by Ellen Raskin. Basically, a billionaire dies and sends a group of people on an Edgar Allan Poe treasure hunt through Boston. And one of the hunters is Tuesday Mooney, a loner whose childhood best friend disappeared, thought to have been murdered. Being that her mind has conjured up her friend as a “ghost” to cope and her teen neighbor (found family) is also grieving the death of her mother in a car accident there’s a lot of overlapping exploration with Dead to Me—plus dark humor. (TW depression/parent death in recent past/discussion about suicide/past domestic and child abuse) 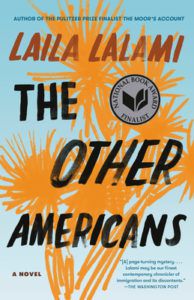 The Other Americans by Laila Lalami

This has quite a bit of overlap with Dead To Me in that both start with a hit-and-run and the fall out, including the grieving for a loved one. It explores the family’s grief, focused on the daughter and widow, and also the impact on the community as a witness to the crime is hesitant to come forward. You get multiple points of view, including those of a former cop and the detective working on the case, some found family, and difficult questions to ponder, making this a great follow-up read to the show. (TW addiction/PTSD)

Unusual Suspects Newsletter
Sign up to Unusual Suspects to receive news and recommendations for mystery/thriller readers.
Thank you for signing up! Keep an eye on your inbox.
By signing up you agree to our terms of use

This is a beautiful and ultimately uplifting Australian book about family and friendship and the process of grief and moving forward. Beth Teller may be dead but her dad can still see her and speak to her, something that is not helping him move on from losing her. Beth decides the best way to help her father, a detective, is to help him with a current case of an unidentified body found in a fire at a children’s home where the caretakers are also missing. Enter Isobel Catching, a witness they interview who poetically recounts her story. (TW there is nothing on page but alludes to child abuse.) 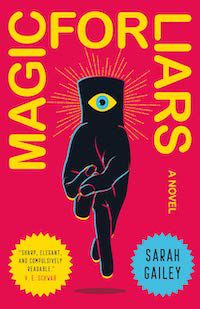 Magic for Liars by Sarah Gailey

This is a PI novel sprinkled with magic since it’s set at a magic school, but it’s very much grounded in our world. It’s about two estranged sisters with a ton of baggage who grew up divided by the fact that one was magic and the other was not. One now teaches at a school for magic where a fellow colleague has been murdered, and the other is the detective investigating. Awkward family reunion to say the least! This one explores many aspects of grief including how when unprocessed it can consume a person. (TW cancer)

Alice Dupont is a pregnant mother to a 6-year-old when her husband dies in a car accident. The problem—outside of being widowed—is that the car accident happened nowhere near where her husband had told her he’d be. This turns Alice into a dog with a bone, needing to know why he was somewhere else and what else she may not have known about her husband…I especially recommend this on audio. (TW past suicide mentioned/anxiety attacks)