Title: Two themes for the price of one?

We had the pleasure of C.C. blogging the first Patti V. puzzle since she became editor; now we have the first post-change puzzle from her new assistant. Christina has been a very active since she DISCOVERED crossword puzzles for fun and profit four years ago.  If you click on the link above it is an interesting and helpful introduction if you want to follow in her footsteps, or word steps. I became aware of her with the reading of the CROSSWORD PUZZLE COLLABORATION DIRECTORY   a Facebook group. Perhaps Moe will share his experience with them. Anyway, on with the puzzle.

This Friday effort jibes with the new style, with an emphasis on fun cluing.  The themers are a 9, two 11s and a 9. The longish CONDUCT, DISTANT,  I NEED IT, and VACUOUS are just 7 spaces, though we do have LIFE IS GOOD and MISSED CALL  in the down fill. But wait, there is more! There are also two ten letter fill clued as if they were part of the theme, but are they?

16A. NVS: GREEN EYED (9). If you have imagination you can see NVS = ENVIOUS, especially if you add IOU to the letters. Jealously is the green-eyed monster.

23A. TDS: MIND NUMBING (11). TEDIOUS, exhibits an additional insertion of IOU and thus a punnish fill.  A ninety minute organic chemistry lecture was enough brain drain for me.


52A. DVS: UNDERHANDED (11). Ah, good; DEVIOUS = UNDERHANDED. The theme has emerged and is consistent.
65A. ODS: JUST AWFUL (9). ODIOUS is another IOU and completes the symmetry of the main theme.


39A. IC: DISTANT. A curve ball as this is another sounds like clue (if you are icy to someone, you will appear distant) but there is no IOU? Then,

41. MT: VACUOUS. The next clue/fill are exactly the same pattern; if you told someone that their friend was empty headed, they would be vacuous. Hmm.

I hope Christina comes by and unravels this mini-mystery.

5. Sci. major: BIO. Many choices here, must wait for perps.

8. Fisher of "Wedding Crashers": ISLA. Goody, a fill that I am sure is correct. Isla Lang Fisher was born on February 3, 1976 in Muscat, Oman, to Scottish parents Elspeth Reid and Brian Fisher, who worked as a banker for the U.N. She spent her early childhood in Bathgate, Scotland, before moving to Perth, Australia with her family in the early 1980. imdb. 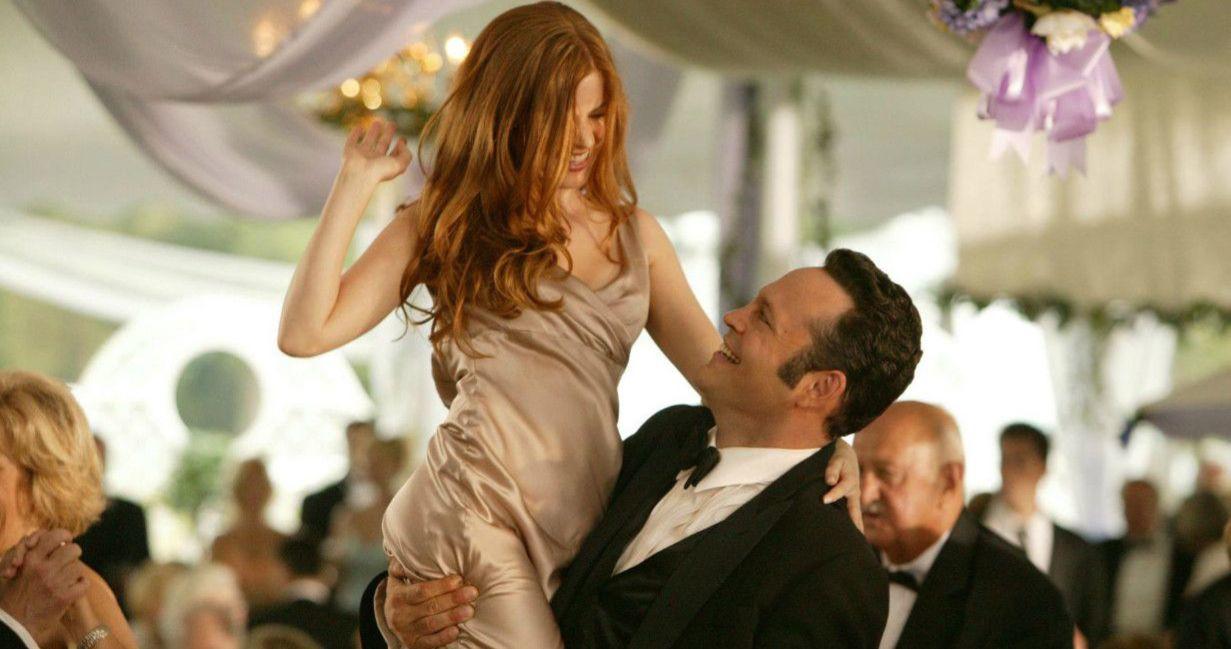 Photo by Richard Cartwright - © 2005 - New Line Cinema
12. Eight or nine on the Beaufort scale: GALE. I will try not to give a long winded answer. LINK

13. Twinge: PANG. Which sounds exactly like the Thai word for expensive.
14. Hijab and niqab, e.g.: VEILS.

18. Like Keebler's animated bakers: ELFIN. I hit a minor speed bump with ELVIN, the first name of a City Commissioner I know.

22. Toy company with theme parks: LEGO. This also is is in Mnnesota.

30. Island chain: LEI. This is witty; we used to make all kinds of chains in schools. Then paired with the non-clecho...

31. Parts of an island chain: CAYS. This is pronounced and is another spelling of KEYS, which anyone in Florida is familiar with.

32. Bagel flavor: ONION. I cannot think of any other five letter bagels.

34. Part of a flight: STAIR. Another nice deception, not running away or going in the air, just stairs.

36. Steve Carell voice role: GRU. I am not sure I knew he was the felonious Gru in the DESPICABLE ME movies.

44. Place to have a ball?: DISCO. A cute clue/fill pair; literal but evocative.

49. Olive extract: OIL. Poor girl, she has had a hard life and they cannot even spell her name correctly.

51. Some Neruda poems: ODES. A reminder of dear Clear Ayes, our initial poet in residence. The critics list these as his BEST. This is my favorite of his ODES.

57. Pull the plug on: END. My mind jumped to the horrible choice made in hospice.

67. Totally fine: ALL OK. Or if you want obscure and you are a techie nerd ALLOK

1. What some layers cover: EGGS. See, I knew this was intended as a layered puzzle.

10. Apparel company with a smiling stick-figure icon: LIFE IS GOOD. 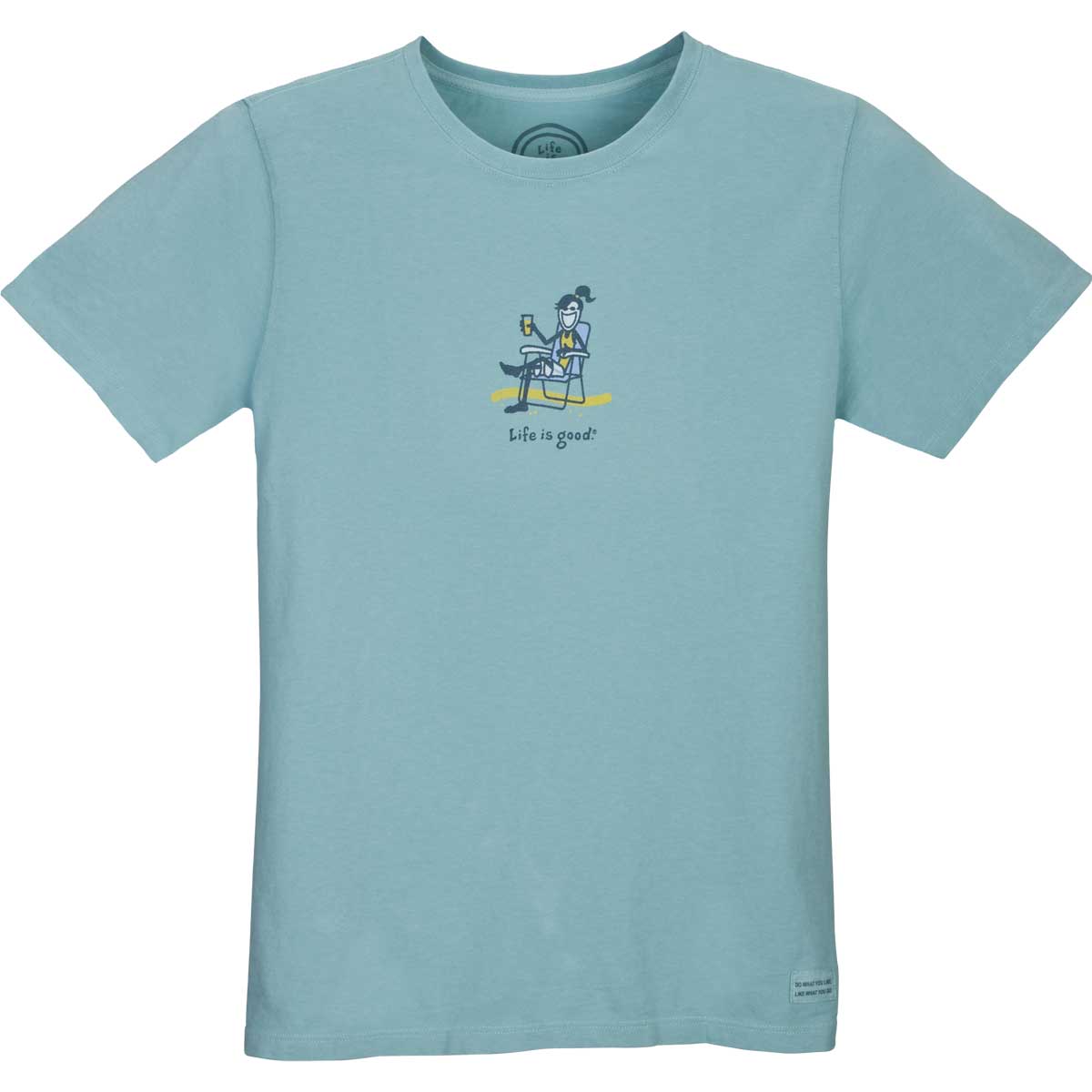 13. Grave danger: PERIL. Pauline where are you?

15. Love thy neighbour, say?: SNOG. Notice the "our" telling you that this is a British answer and snogging is just what you think it and you are not supposed to it.

21. Saint __: only country named for a woman: LUCIA. What male world we have grown up in, no wonder they created feminists.

37. Mythological character?: RUNE. Not a character in a story but  writing character.

42. Aduba of "In Treatment": UZO. Uzoamaka Nwanneka Aduba is an American actress. She is known for her role as Suzanne "Crazy Eyes" Warren on the Netflix original series Orange Is the New Black, for which she won an Emmy

54. Short-necked pear: ANJOU. Poor guys, they are yummy, neck or not.

55. "Snowfall" law gp.: DEA. Snowfall is set in 1983 Los Angeles and revolves around the crack cocaine lords and its overall impact on the city’s culture. Thw DEA wants to catch them, maybe.

64. Genre with Jamaican roots: SKA. According to Britannica this was pioneered by the operators of powerful mobile discos called sound systems, ska evolved in the late 1950s from an early Jamaican form of rhythm and blues that emulated American rhythm and blues, especially that produced in New Orleans, Louisiana.

66. __/her pronouns: SHE. What aperfect end to the new all female regime at the LA Times Crossword Puzzle.
The excitement is in the air as we get through more puzzles; you must admit they can be much fun. Thank you Christina and thank you all who read an write and support this blog, C.C. and Boomer and give me a place to hide. Lemonade out. 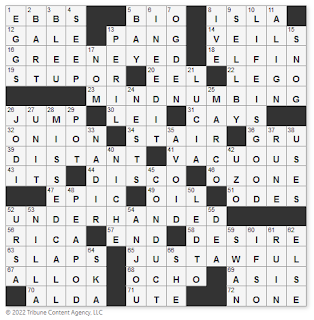