I know, that's hard for me to do, for as bloggers we get the answers ahead of time, and our blogging "software" allows us to reveal the answers whenever we want to

But my "promise" when I was asked to recap every-other-Friday puzzle, was to solve the puzzle without hints; just as you do. I don't open the email attachment with the answers until I've solved the puzzle

Today, I had to open the attachment early and often

In fairness to Stefan, I'd like to dissect this puzzle as I had both success and failure. Let's go!

Today's puzzle has four "themers", each 14 letters in length for a total of 56 "spaces". There are 42 "blocks" (black spaces), so that means that almost 44% of the puzzle = themers + blocks. That's a lot. Stefan managed to keep the number of 3-letter words to a minimum, but had 35 4-letter word entries, if I counted correctly. That's a ton

The theme entries share a common "question" in their clues: " ..., abridged?" So of course, I knew this probably meant book, movie, or play titles

Confession: I may be the least well-read person here. This wasn't going to go well for me ...

I approached the grid from several spots, and solved the first of the themers: 20-Across. Play about the shortcomings of capitalism, abridged?: SALESMAN'S DEATH. The familiar title - and one I DID know - is "DEATH of a SALESMAN" by Arthur Miller. It seems logical, then, that the other themers are missing the words "of a", and are thus, "abridged"

Next entry: 25-across. YA (abbr for Young Adult perhaps?) series about an insecure preadolescent, abridged?: WIMPY KID'S DIARY. This is one screen event that I did NOT know about. The main Wimpy I know was the character from the Popeye comics who enjoyed hamburgers. And for those of you who lived or visited Pittsburgh, you may be familiar with this hamburger chain. Wimpy's Burgers used to have a very iconic ad on radio and television touting all of the places where you could enjoy their fare, though they made a point of saying that "There's no Wimpy's in Wilmerding", but I digress ... after watching this short trailer, I may try to find Diary of a Wimpy Kid, and watch a few episodes

The penultimate entry: 42-across. Film about a crime in a small town, abridged?: MURDER'S ANATOMY. Per Wikipedia: "Anatomy of a Murder is a 1959 American courtroom drama and crime film produced and directed by Otto Preminger. The screenplay by Wendell Mayes was based on the 1958 novel of the same name written by Michigan Supreme Court Justice John D. Voelker under the pen name of Robert Traver. Voelker based the novel on a 1952 murder case in which he was the defense attorney. It has a star-studded cast and includes an appearance by Duke Ellington, who also wrote the musical score

And last but not least: 49-across. Novel about a Japanese entertainer, abridged?: GEISHA'S MEMOIRS. IMDb describes "Memoirs of a Geisha" as: "In the 1920s, 9-year-old Chiyo (Suzuka Ohgo) gets sold to a geisha house. There, she is forced into servitude, receiving nothing in return until the house's ruling hierarchy determines if she is of high enough quality to service the clientele -- men who visit and pay for conversation, dance and song. After rigorous years of training, Chiyo becomes Sayuri (Ziyi Zhang), a geisha of incredible beauty and influence. Life is good for Sayuri, but World War II is about to disrupt the peace"

According to Merrium Webster, the term "of a" is described as an idiom, and is used to indicate that someone or something is a particular type of person or thing; as in the expression "son of a gun". In today's puzzle, Stefan is abridging "of a" in its possessive form; all of the titles have been shortened to the object (SALESMAN, KID, MURDER, and GEISHA) having an apostrophe. Pretty clever. My stumbling block was not knowing three of the four entries by their more common title. And throughout the puzzle a number of clues had me guessing incorrectly as well

Since my opening statement was quite long, I am going to "abridge" the remainder. As always, comments are welcome and appreciated!

Here is the grid: 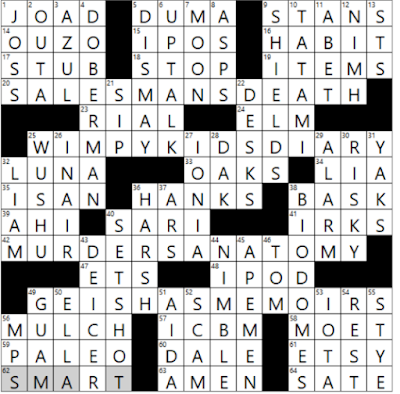 Across:
1. Steinbeck surname: JOAD. "Grapes of Wrath" - I knew this one

9. Overdoes the fandom, in slang: STANS. Not familiar with this definition

14. Liqueur that water turns cloudy: OUZO. I know OUZO but did not know it made water cloudy. I usually drink mine with three coffee beans floating on the surface. Does anyone know why this is?

15. NASDAQ newbies: IPOS. Initial public offering, plural. Not to be confused with: 48-across. Apple gadget: IPOD

17. Inadequate Wikipedia entry: STUB. Not familiar with this definition

34. University of Pennsylvania swimmer Thomas: LIA. Made the news recently

40. Garment worn with a choli: SARI. Choli was an unknown to me, but the word SARI made sense. Here is a choli; the SARI is the wrap I'm guessing 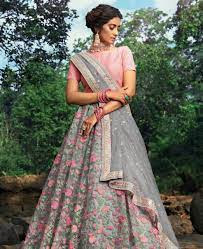 58. Bubbly name: MOET. CSO to Chairman Moe. Anyone surprised that it's his favorite bubbly??!!

60. Hill partner: DALE. "Chip" partner would be another way to clue this 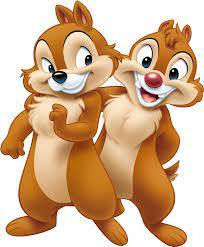 62. "Hacks" Emmy winner Jean: SMART. Jean Smart (born September 13, 1951) is an American film, television, and stage actress. She is known for her comedic roles, one of the best known being her role as Charlene Frazier Stillfield on the CBS sitcom Designing Women. She later gained critical acclaim for dramatic work, with her portrayal of Martha Logan on 24. I watched neither of these shows, so this was an unknown to me

Down:
1. "You Had Me" singer Stone: JOSS. I whiffed on this. Again, not someone with whom I am familiar

5. Consternation: DISMAY. I don't think this defined the puzzle for me today; more like "frustration"

6. Rise in pitch that can make a statement sound like a question: UP TALK. Inhersight dot com describes UP TALK: "What is uptalk and why is it unprofessional?" Uptalk, also called upspeak, is a linguistic term usually associated with how women speak. Many professionals advise women to eliminate the style of speaking entirely in order to be taken seriously in and out of the workplace, but this ill-advised guidance stems from patriarchal, sexist beliefs

7. Apollo theater?: MOON. I'm guessing - now that I've had several days to think about it - that this clue refers to the Apollo NASA missions that traveled to the MOON. Meh

9. Claressa who is the only American boxer to win consecutive Olympic gold medals: SHIELDS. I wouldn't want to mess with her!

12. "Mrs. Frisby and the Rats of __": NIMH. Another book title with which the Chairman was unfamiliar

13. D and C in D.C.: STS. We had this recently identifying STreetS in NYC

25. Chinese martial art: WUSHU. A very seldom used entry; just once before at LA Times, and thrice at NY Times

28. Black Hills terr.: DAK. How about a clue for us sports fans? For example, "Dallas Cowboys QB, Prescott"

29. Chili rating unit: ALARM. I knew this, because I have participated in a few chili cook-offs. The "ALARM" is measured in the "heat" - or spiciness - of the chili dish. One = mild; five = you'll need a fire fighter to assist extinguishing the flames in your mouth

32. Payne of One Direction: LIAM. Not a band I listen to. Liam Payne is a vocalist

38. Closed ecosystems: BIODOMES. Used once before in crossword puzzles

40. Basket made without weaving?: SET SHOT. FINALLY! A clue for us sports fans!! I got this right away. More people would recognize the term "jump shot". So, what's the difference between a SET SHOT and a JUMP SHOT?

44. Agile: NIMBLE. As in Jack when he jumped over the candlestick 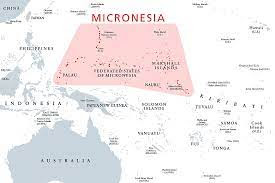 50. Fashion designer Emhoff: ELLA. Ella Rose Emhoff is an American model, artist, and fashion designer. As the daughter of U.S. Second Gentleman Doug Emhoff and stepdaughter of U.S. Vice President Kamala Harris, she is a member of the Second Family of the United States. Another "learning" moment for Moe 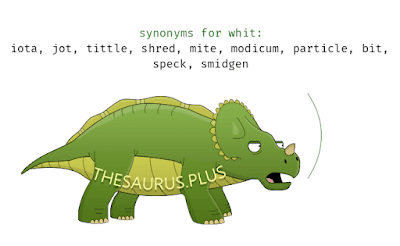 54. Take ten: REST. If someone tells you to take five or to take ten, they are telling you to have a five or ten minute break (REST) from what you are doing