Title: Add three letters and call me in the morning.

Doctor (figuratively speaking) Wechsler has built another extra large grid (15x16) to permit room for his three 16 letter theme fill. Each of them has the trigram (three letter) AMA added to a base phrase. We also have the rare benefit of a reveal on a Friday which helps solve this puzzle even if you are not used to JW's tricks. The triple sevens in each bottom corner and the triple sixes on the sides are indication of the gridding skill this man has. This is a very difficult puzzle to build as it is hard to find another 16 letter fill where AMA could be added to an existing phrase. Some of the fill is more strained than we usually see from JW, but the first themer is so perfect there always are consequences. Bear in mind he does his fill by hand not machine.

ACACIAS, BAILEYS, CRYSTAL, CUSTODY, DEADPAN, ECSTASY, ENROBED, ENSNARE, NUREYEV, RIPENED, UNDERGO, VANILLA, ELECTRIC, and LUCIDITY are all interesting non-theme fill, a benefit of having 15 extra spaces in the puzzle. The first of the themers may be the most challenging.

18A. *Crèche, for example?: CHRISTIAN DIORAMA (16). With DIORAMA not an everyday word and the final fill combining a clothing designer with the trigram to create this religious piece may be a bit outré. But then it may have been the puzzle's inspiration. Vote (  ) yes   (  ) no.

26A. *Recent president scrutinizing a book on jurisprudence? : OBAMA EYING THE LAW(16). This also is tricky because the phrase obeying the law is invaded by the AMA creating separate words rather than tagging on the end.

42A. *Animal rights goal in the Andes?: JUSTICE FOR A LLAMA. (16). We get Ogden Nash's 2 LLama; with all the commercials they are now appearing in I would think llamas are the richest of the working beasts. Finally, the reveal...

54A. Altered, in a way ... and a hint to the org. that helped create the answers to starred clues: DOCTORED UP (10). The American Medical Association. They were founded in1847, making this their 175 year anniversary. On to rest...
Across:

1. "'And hast thou __ the Jabberwock?'": Carroll: SLAIN. What a wonderful quotation to begin a creation aimed at people who love words. The poem may appear to be total nonsense but it has been studied and discussed such as this ANALYSIS by Dr. Oliver Teale. His blog is even more successful than the Corner.

10. Event involving hidden matzo: SEDER. Passover (Pesach) begins this year at sundown on April 15, which is also a sabbath.


15. Shell material: NACRE. The inside of the shell of some mollusks also known as mother-of-pearl. Here is a picture of a vintage Egyptian folding chair I was given some time ago with nacre insets. 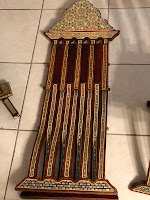 17. Horror film burden: CURSE. My thought is poor Lon Chaney Jr. and the curse of the werewolf.

22. Dressed: ENROBED. Back to our naked Emperor from my Wednesday write-up.

34. Grammy-winning pianist Peter: NERO. This MUSICIAN was extremely popular during my growing years of the 50s and 60s.

35. 2020 N.L. batting champ Juan: SOTO. This 23 year old from the Domincan Republic has already logged 4 years in the majors. STATS. A very hard fill for most here, and fill unlike Jeffrey.

36. "Sula" author Morrison: TONI. This was her second novel and Goodreads says, "This rich and moving novel traces the lives of two black heroines from their close-knit childhood in a small Ohio town, through their sharply divergent paths of womanhood, to their ultimate confrontation and reconciliation."

37. "That describes me, right?": AM I NOT. This sounds  philisophical and historical as well as being a rallying cry of the modern young.

40. Paradise: HEAVEN. Ah, religion a forbidden topic here but an interesting one.

48. Clear thought: LUCIDITY. Dictionary says this word is the quality of being easily understood, completely intelligible, or comprehensible. A goal for a blogger?

49. Spirit that's also a game: GIN. Alchemists in the Middle East were the first to master distillation. They were hoping to not only change lesser elements to gold but to make medical elixirs. To do so, they would distill liquid, collect the vapor, and gather the “spirit” that came off the material. Gin is a very competitive card game.

52. Trough fill: SLOP. Historically people saved their food scraps and spoiled food and served them to their pigs in the trough.

53. Huge amounts: SEAS. I guess this is something likened to the sea especially in vastness such as a sea of faces.

59. Plain: VANILLA. I have had bosses and secretaries who called manila folders "vanilla folders."

62. Soviet-born ballet immortal: NUREYEV. I am not a great fan of ballet, but he was amazing.

66. Broad-topped trees: ACACIAS. Hard to believe these are in the pea family 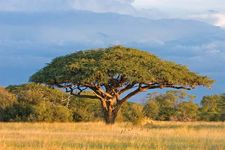 68. Safekeeping: CUSTODY. When they throw you in jail, safekeeping is not your first thought.

1. '60s civil rights gp. inspired by student sit-ins: SNCC. The Student Nonviolent Coordinating Committee was the culmination of many sit-ins by young blacks in 1960. It also spawned many impressive black leaders.

2. Lion player Bert: LAHR. Since Detroit traded away Matthew Stafford so the Rams could win the Super Bowl, Bert is back to being the most revered lion.

3. "__ in the Dark": 1988 Neill/Streep film: A CRY. Not the original title, but a movie based on a true story of a New Zealand woman who was wrongfully convicted of murdering her baby daughter. You-tube will not let me use it, but look at the movie trailer, and you will see Streep really is magical at becoming a character.

4. Bearded bloom: IRIS. At first I thought of Morris Bloom and his make believe wife, but without the capital B it must be this beautiful plant.

6. Irish liqueur made by an English company: BAILEYS. It may seem that this liqueur has been around forever but Baileys was invented in London in 1973 by a team of professionals hired for the job. These included Tom Jago, head of innovation and development for International Distillers & Vintners (IDV), who was from the U.K.; David Gluckman, a South African; and Hugh Seymour-Davies, an Englishman from Oxford and Eden. They aparently do not like apostrophes.

8. Chicago's __ Center: AON. For our big city midwestern readers this skyscraper was completed in 1974 as the Standard Oil Building. With 83 floors and a height of 1,136 feet (346 m), it is the fourth-tallest building in Chicago, surpassed in height by Willis Tower, Trump International Hotel and Tower, and St Regis Chicago. AON has bought naming rights to this and one in Los Angeles.

10. Really burn: SCORCH. The wiktionary says it is from Middle English scorchen, scorcnen (“to make dry; parch”), perhaps an alteration of earlier scorpnen, from Old Norse skorpna (“to shrivel up”). It reminds me of the scorched earth caused by war.

11. Catalan cash: EURO. In Catalonia they now use Euro.

13. Girl in a Salinger title: ESME.The short story For Esmé with Love and Squalor is a post World War II story which I am not sure I ever understood. Here is an ANALYSIS. This might be time to ...

26. Out working: ON A JOB. If it weren't a three word answer this would be very easy.

28. Ascended: ARISEN. Another word with many connotations.

31. Romantic-sounding herb: LOVAGE. Native to Southern Europe, lovage is a member of the parsley family but tastes like celery. My wife will feed me anything green she finds.

32. Lethargy cause: ANEMIA. Low red blood count caused by many serious and not serious matters.

33. CeCe with 12 Grammys: WINANS. Not related to the Wynan brothers. BIO.

38. Natural resource: OIL. A topic I will not touch now.

43. Sheer joy: ECSTASY. What you are likely feeing now that this tour is almost over.

46. Came to fruition: RIPENED. A tiny pun since the word was taken from fruit becoming mature.

53. Use plastic, say: SPEND. Some of my credit cards are no longer plastic.

56. Wearing, with "in": CLAD. The robe convering the emperor.

57. Beach feature: DUNE. A book, a hit movie, and a natural sand formation.

59. Brief cleaner: VAC. I just throw mine in the washer with the rest of my clothes.

60. Pressure opening?: ACU. Not tire? I am getting tired.

61. "Illmatic" rapper: NAS. Two days in a row! He is a very respected rapper who is only now getting his full recognition depite being around for 25 years. As a 73 year old sheltered white man I will never be able to fully appreciate his artristy but the world does.

64. Live-ball __: baseball period: ERA. It is the dead ball era which ended when Babe Ruth (the ball player, not the candy bar) started smacking home runs in record fashion in 1919. We now have the livlier ball era.

65. S.A. country, to the IOC: VENezuela. The International Olympic Committee assigns three letter tags for each nation, which is only slightly ironic in this three letter puzzle. This troubled nation is often in the news for unhappy reasons.
And speaking of unhappy, I must now leave you to wait for the reaction of all of you who read and write. I do get impatient but still love the process. Thank you JW and all of you. Lemonade out. 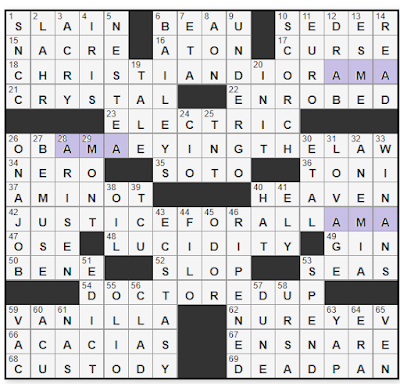