Title: G where did you come from?

Amie comes to us from Idaho; oh I mean I don't know. The theme is a very classic Friday add a letter to a L-starting phrase, clue to the new meaning and let the hilarity ensue. My new computer and I have been disagreeing all week so I have idea what you will get as the final blog but again, it should be fun.

18A. Protection from bright flashes of light?: GLINT SCREEN (11). Lint screens do protect, add a G and you are safe from the flashes.

26A. Sparkly insects?: GLITTER BUGS (11). The fireflies light the way to pick up all the garbage.

44A. Sign on a sauna door?: GLISTEN HERE (10). The spa will tell you that you will shine from your sweating.

57A. Entry on a dating site for fireflies?: GLOW PROFILE (11). Well not a dupe but a description of the joy of dating someone who is not a loud mouth.

1. "The Magic School Bus" airer: PBS. This has been around for many years, and has a classic theme song by a Star.

4. "Let's take it down a notch": NOW NOW. I can picture HG telling his class to settle down.

14. Clickable link: URL. Just as buildings and houses have a street address, webpages also have unique addresses to help people locate them. On the Internet, these addresses are called URLs (Uniform Resource Locators).

15. Green, maybe: UNRIPE. Unripe can be good, especially for some olives, though not Ms. Oyl.

16. "Ocean to Ocean" singer Tori: AMOS. This is the title of both an album and a song. I think I will link the album. Not. Surprisingly bad language. LYRICS.

21. Philanthropist Melinda: GATES. The ex, now disposing of a tiny part of her fortune. It...

23. Amanda Gorman, for one: POET. We were inaugurated along with her and Joe.

31. Puppy noise: YIP. I first read puppy nose and was quite confused. But it did not lead to any...

35. Actress Skye: IONE. Wow, she and Issa in a single puzzle!

36. Couch: SOFA. Sometimes they must give you one.

37. "Bus Stop" playwright: INGE. Man, another four letter proper name starting with "I." Are there more?

38. Takes for a ride: SCAMS. A major problem for the elderly in South Florida.

40. Not biased: FAIR. This our goal as bloggers, and as people.

41. Decent plot: ACRE. I personally believe a book needs more of a plot than just land...oh that kind of plot.

43. Spam holder: TIN. Fooled you, except for our Hawaiian solvers.

47. Observe Ramadan: FAST. This is a part of what is the Islamic ritual celebrated in the  ninth month of the Islamic calendar, observed by Muslims worldwide as a month of fasting, prayer, reflection and community. Wikipedia. More DETAIL.
48. Just not done: TABOO. Each religion has its taboos, as do almost all organizations and groups.

51. Behavior pattern: HABIT. This is often influenced by what we are taught by organizations and groups.

54. Short-term sculpture material: ICE. If you do it right you could melt his/her/their heart.

61. Course requirements?: PLATES. The trickiest of the clue/fills for me, as you need new plates (dishes) to serve each new course of a meal. Bravo.

65. Take home: NET. Straight forward if you know we are talking about pay.

1. Pixar short about a ball of yarn: PURL. Purl is the first short of Pixar's Spark Shorts program, in which employees at Pixar are given six months and limited budgets to produce short animated films. The film is about a pink ball of yarn which is discriminated against because of her upbeat and cheerful attitude. 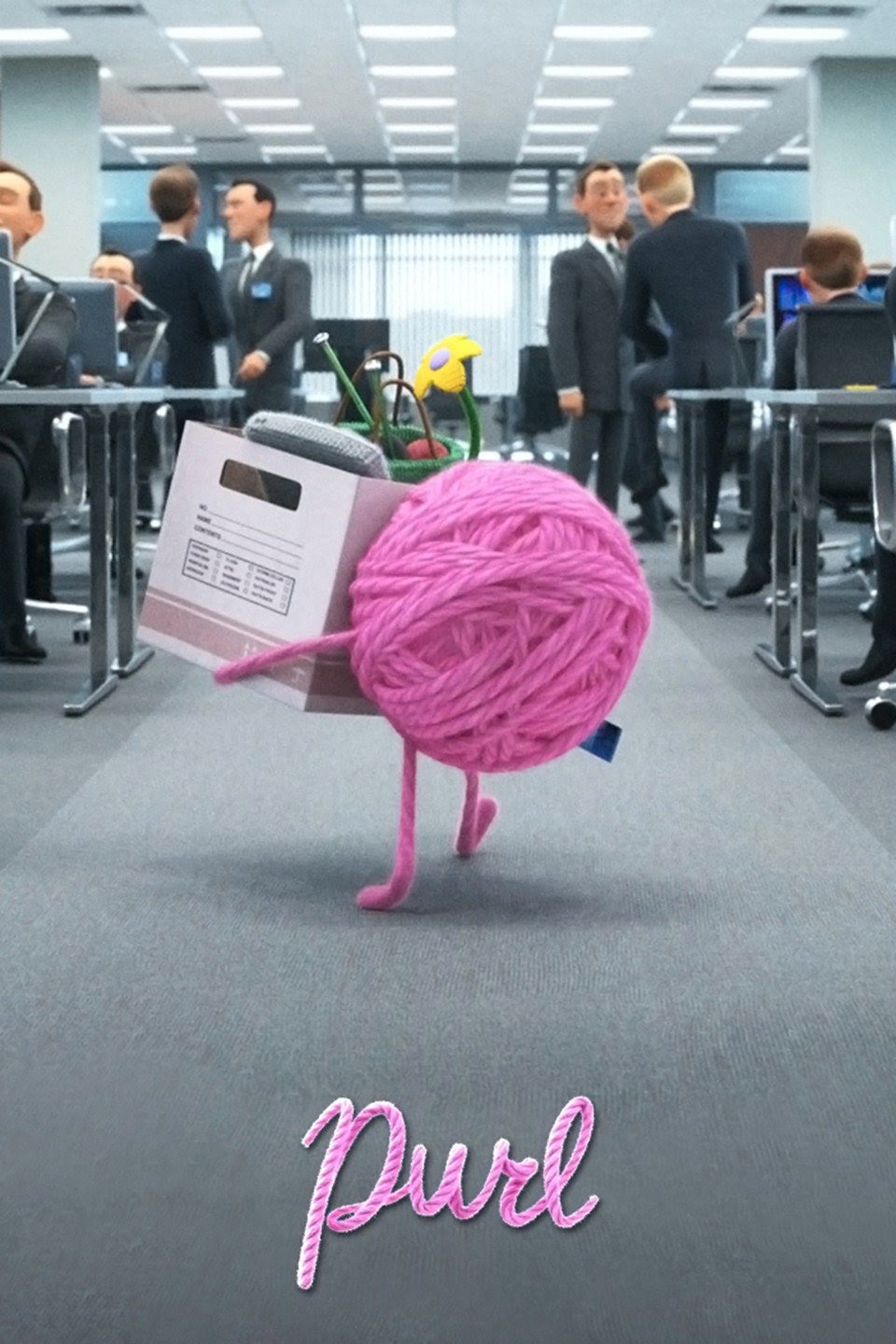 3. Not setting an alarm, say: SLEEPING IN. This may be a debut for this phrase in the LAT.

4. Denver team: NUGGETS. There was gold in them thar hills.

5. Airing in the wee hours: ON LATE. See Leno infra.

7. "Enough" number of women justices on the Supreme Court, per Ruth Bader Ginsburg: NINE. She was priceless.

9. "Rushmore" director Anderson: WES. Wesley Wales Anderson is an American filmmaker. His films are known for their eccentricity and unique visual and narrative styles. Wiki. He is only 53. My computer has decided to stop playing trailers, so you are on your own.

12. Like many dorms: COED. So may adventures never would have been adventures.

19. NFL analyst Collinsworth: CRIS. He has moved to ESPN to do Monday night football. A fellow Florida graduate.

24. Critter that eats while floating on its back: OTTER.

25. Range listed on board games: AGES.

26. Take for a ride: GRIFT. A random G to spoil the perfection?

42. Genealogy aid: DNA TEST. I have met quite few previously unknown relatives; I think it is cool.

46. Bent in the wind: BOWED. We get a lot of that from June through November.

49. Montreal-based shoe brand: ALDO. This fill has appeared before as Canadian shoe brand but I have no idea who wrote this clue, Patty, Christina or Amie.

51. "Celebrity Skin" rock band: HOLE. It is both a song and an album, how about a picture?

53. Take the bait: BITE. The word bait "food put on a hook or trap to attract prey," c. 1300, from Old Norse beita "food, bait," especially for fish which led to the fish biting which led to anyone being hooked into something they did not want to do.

55. System of rules: CODE. This was derived from the Latin CODEX,  a term which originally denoted a systematic collection of statutes made by Justinian or any of the later Roman emperors. See behavior and taboo supra.

56. Four-award acronym: EGOT. The Emmy Grammy Oscar Tony acronym was coined by actor Philip Michael Thomas in late 1984, when his role on the then new hit show Miami Vice brought him instant fame, and he stated a desire to achieve the EGOT within five years. Thomas has never been nominated for any of the EGOT awards.

58. Turntable letters: RPM. Revolutions Per Minute and a nice historical place for me to spin away. I hope you all enjoyed the concert brought to you by the concerted effort of Amie who has been ready and Lemonade who is me. Thank you all who read, write and pray for Boomer. 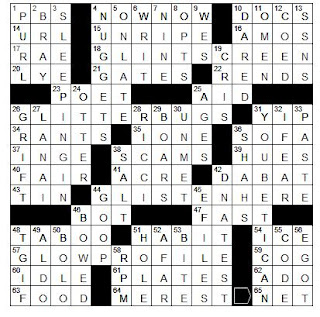