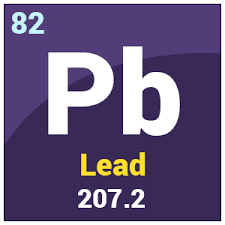 Puzzling thoughts: Today's puzzle has a quartet of entries with no reveal. Each of the entries has a "B" (or "B's") in a place where a "P" would make a more plausible phrase. Here they are:

20-across. Group of apartments made of gingerbread?: EDIBLE COMPLEX. The more recognized phrase that is mimicked is: OEDIPAL COMPLEX. According to Brittanica dot com: "Oedipus (Oedipal) complex, in psychoanalytic theory, is a desire for sexual involvement with the parent of the opposite sex and a concomitant sense of rivalry with the parent of the same sex; a crucial stage in the normal developmental process. Sigmund Freud introduced the concept in his Interpretation of Dreams (1899). Well, isn't THIS the start to some "blue" blogging, Moe?? Would you just shake your head if I posted this song?

The punned version that Ryan and Doug chose as a clue implies this "EDIBLE"; albeit in the form of a group of these as in a condominium COMPLEX 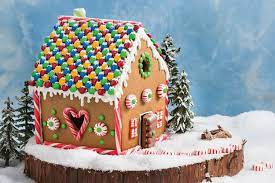 35-across. Gang made up of very light eaters?: NIBBLE RING. In the punned version, the word "RING" can indicate a "gang". But in the non-punned sound-alike ... well, I guess you'll just have to imagine what THAT image would look like

The REASON you WON'T find an image for the NIPPLE RING is because (36-down. Two-piece piece: BIKINI TOP), covered it!

43-across. Logo designer's day-to-day existence?: SYMBOL LIFE. Unlike the other entries, this one did not feature a sound-alike that used "BLE". Instead, it used "BOL". Not sure why the editor would deviate, but that's why they're paid to edit, and I am NOT paid to blog. Designer's "SYMBOLS" are their iconic images that enhance the brand. I doubt any of them lead a "SIMPLE LIFE", though

And last, but not least, is: 53-across. Cute, furry problem for Captain Kirk?: TRIBBLE THREAT. Ahh yes, a Star Trek reference, although I wonder if our resident Trekkie, Picard is a fan of this episode from the "original series". But before I link a YouTube video, the un-punned phrase "TRIPLE THREAT" can mean several things:

a) perhaps an actor who can sing, dance, and act

(b) perhaps a running back in football who can run (duh!), block, and catch passes

(c) perhaps a basketball player who can pass, shoot, and rebound effectively ...

This is all I could find about the co-collaborator, Ryan Hecht. Doug Peterson is a 15+ year veteran cruciverbalist who's had at least 50 puzzles published in the NY Times, and who created the first puzzle edited by Patti Varol on April 18th of this year in the LA Times. Good job, gentlemen, though many of the clues were obscure to me - guess that is part of why this was a Friday selection. Here is the grid: 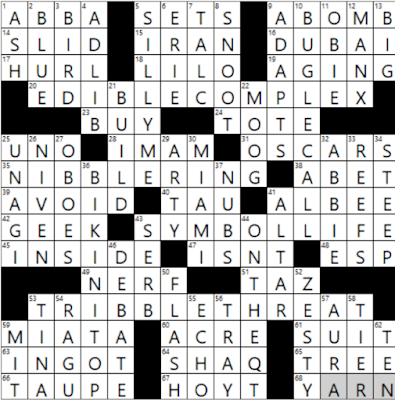 Let's see how the rest of the grid filled in ...

15. Country that outlawed alcohol in 1979: IRAN. Learning moment for me. According to Amnesty dot org: "What happens if you drink alcohol in Iran?" Under Iran's Islamic Penal Code, consumption of alcoholic beverages is punishable by 80 lashes, and if an individual is convicted and sentenced three times, the punishment on the fourth occasion is death. And neither can tourists drink alcohol whilst visiting. Guess Moe can take that place off of his "bucket list" of places to visit ...

16. Home of the world's tallest building: DUBAI. A picture is worth a thousand words

17. Throw hard: HURL. The word "HURL" has another meaning; perhaps if Ryan and Doug added the word "up" in the clue, between the words "throw" and "hard"

18. Disney title character from Hawaii: LILO. Did you know her last name is Pelekai?

19. Like cellared wine: AGING. I guess this could be a CSO to yours truly. No "cellar" here in Arizona, but I do have a small (48 bottle) wine fridge that maintains a perfect temperature and humidity (55 degrees/70%) for AGING wine. I haven't added too many bottles to it that require much AGING, as my advancing years are limiting me to purchasing wine that can be drank now. It's also why I rarely buy green bananas ...

23. Fall for: BUY. See the last sentence in my previous comment. I am not "falling for" (BUYING) Bordeaux futures, e.g., as I'm not sure my palate would discern the enhanced quality of a wine I shouldn't drink for another 20+ years

24. Convention giveaway: TOTE. I put "SWAG" into this at first, which slowed me down considerably

25. Card game with a Pixar version: UNO. Another example of something to add to your minutiae list

28. Worship leader: IMAM. I'm pretty sure that none of these who reside in Iran imbibe

38. Keep hidden, perhaps: ABET. OK, is this ABET or A BET? Could it be both? I suppose when someone ABETs a criminal they would like to keep this fact "hidden". Likewise, if someone places A BET on some random sporting event, they may also want to keep that "hidden" from their partner, e.g. How did YOU interpret this?? Please place in the comment section, below

39. Skirt: AVOID. I would NEVER SKIRT my duties as a blogger ... OK, maybe this summer, when I'm on holidays

40. Letter from ancient Troy: TAU. The clue is "all Greek" to me

41. "Three Tall Women" playwright: ALBEE. A snippet from Wikipedia dot com: "Edward Franklin Albee III (/ˈɔːlbiː/ AWL-bee; March 12, 1928 – September 16, 2016) was an American playwright known for works such as The Zoo Story (1958), The Sandbox (1959), Who's Afraid of Virginia Woolf? (1962), A Delicate Balance (1966), and Three Tall Women (1994). Some critics have argued that some of his work constitutes an American variant of what Martin Esslin identified and named the Theater of the Absurd. Three of his plays won the Pulitzer Prize for Drama, and two of his other works won the Tony Award for Best Play

45. Like some jokes: INSIDE. I tried fitting "DAD" something into this, but failed

49. Soft ball: NERF. Note the clue: had it been "Softball" (one word), the entry would've been different

51. Toon spinner: TAZ. Fitting that this entry falls "down under" the "equator" of the grid. Looney Tunes

60. Part of a plot: ACRE. I was initially thinking that "plot" meant a part of a novel/book/movie. You?

61. Tarot's swords, e.g.: SUIT. This was a late fill. I read my daily Horoscope but have never had a session with Tarot cards. But it makes sense to me now

63. Heavy metal bar: INGOT. What would you think an INGOT of gold at Fort Knox is worth? Answer below

64. Crypto.com Arena statue honoree, familiarly: SHAQ. This one took ESP to solve, as I was unaware of the venue called: "Crypto.com Arena". And I consider myself a sports fan. Here's a photo; the Arena is the former "STAPLES CENTER" in Los Angeles. The name changed on December 25, 2021. And of course the honoree is SHAQuille O'Neal, a former basketball icon with the Lakers 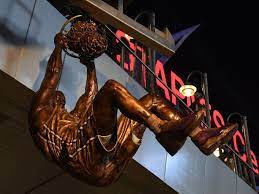 65. Corner: TREE. EDGE and TRAP also fit; both were put into the puzzle grid by yours truly before the crossing words corrected me

67. Folk singer Axton: HOYT. HOYT Wayne Axton was a country folk singer, actor, and songwriter. So many songs to choose from, but this is one most all of you will know. Enjoy!

68. Simple cat toy: YARN. I am leaving this one for our resident feline friend Cross-Eyed Dave

Answer to 63-Across: How much is a standard gold INGOT worth? A typical 400 oz gold bar is quite large, weighing in at whopping 27.4 pounds, with a single bar valued at roughly $750,000 U.S. These gold bars are held and traded internationally by central banks and bullion dealers, and are not typically sold to the general public. So now you know

Down:
1. 2022 Australian Open winner Barty, familiarly: ASH. Per [Wikipedia]: "Ashleigh Barty is a former Australian professional tennis player and cricketer. She was the second Australian tennis player to be ranked No. 1 in the world in singles by the Women's Tennis Association after fellow Indigenous Australian Evonne Goolagong Cawley, holding the ranking for 121 weeks overall"

2. Bummed out: BLUE. So I chose a different meaning of the word "BLUE" as I described a few of the entries to this puzzle. BLUE: "[adjective] informal; (of a movie, joke, or story) with sexual or pornographic content"

3. Jay or oriole: BIRD. Had the "oriole" been capitalized, the clue might have a baseball reference

4. Surprise the director, maybe: ADLIB. Since there is "no script" when we blog, most all of what I type is ADLIBbed

6. Empire State county: ERIE. I lived in ERIE county New York (Grand Island) for a brief period of time back in 1975. Close to Buffalo

9. Rolls with the punches: ADAPTS. I have been ADAPTing to the new editor here at the LA Times Crossword, as her clue usage is different than that of Rich

12. Tailless pet: MANX. As in a tailless cat

22. Synthesizer pioneer: MOOG. MOOG is again finding its way back into crossword puzzles

26. Bond player in the original "Casino Royale": NIVEN. My last blog had a clue for the word "BOND" that referenced David NIVEN indirectly - he was one of seven actors to play the role

27. Yamaha products: OBOES. Yamaha may be known to some as a producer of motorcycles, but they are also well-known for their musical instruments, including OBOES and bassoons and pianos 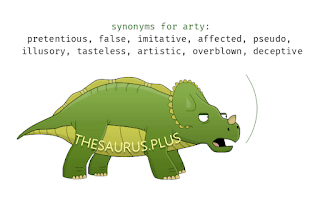 32. "Three Billboards ... " actress Cornish: ABBIE. [Wikipedia]: "ABBIE Cornish (born 7 August 1982) is an Australian actress. Cornish is best known for her film roles as Heidi in Somersault (2004), Fanny Brawne in Bright Star (2009), Sweet Pea in Sucker Punch (2011), Lindy in Limitless (2011), as Sarah in Geostorm (2017) and for her work with writer/director Martin McDonagh in Seven Psychopaths (2012) and Three Billboards Outside Ebbing, Missouri (2017). For the latter, Cornish won her first Screen Actors Guild Award as part of the cast. In 2018, she portrayed Cathy Mueller in the first season of Amazon Video series Jack Ryan opposite John Krasinski. She also played Dixy in the film The Virtuoso (film) (2021) aside Anthony Hopkins

37. Remnants in a crayon box: NUBS. Since my crayon box only came with 8 colors, they quickly became NUBS

43. Tesla, e.g.: SERB. As in Nikola Tesla, a SERBian-American inventor,

44. Hush-hush: ON THE Q.T.. "in a secret or quiet way All the arrangements were made on the q.t. This information is private, so keep it on the q.t. Q.T. is an abbreviation for "quiet"

50. Superhero who taps into the Speed Force: FLASH. This dude

53. Mother of Beyoncé and Solange Knowles: TINA. Her biography

54. Trattoria sauce: RAGU. RAGU is also a "brand name" for a spaghetti sauce, but it generally means: "(RAGU) a sauce that has more meat and minced elements, specifically minced carrot, celery and pancetta … also known as soffritto, and is made with wine, beef broth, and usually a little bit of heavy cream or milk poured in it to lighten the color and enrich the flavor". A "trattoria": the name comes from the French word “traiteur” which derives from “traiter” and respectively mean “host/caterer” and “to treat”. A trattoria is not a generic restaurant though: it always serves or is supposed to serve, traditional local food

55. Unoriginal reply: ECHO. Maybe the reply is "unoriginal", but the clue certainly IS original

56. DVD holder: TRAY. Most new PC's don't have one of these built in 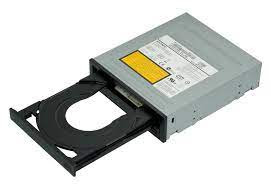 57. Special glow: AURA. Fun fact I found: "How do you take a picture of your AURA?" First, you place your palms on a pair of metal plates, which are connected to a camera. When the photographer hits the shutter button, the plates send information about your energy to the camera. Colors corresponding to that energy then appear around your figure in a printed Polaroid photo. Sounds kinda special to me 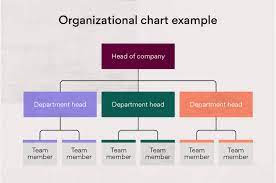 62. Score half: TEN. As in "Four score and seven years ago ..." The word "score" refers to the number "twenty", of which half of that is TEN

And that's a wrap! Hope you enjoyed doing this puzzle. If you'd like to try your skill at solving another, here is a link to a puzzle that Chris Gross (aka, Chairman Moe) has running today at Newsday, entitled "Parking Spaces". Please give it a stab! Thanks in advance