Karen makes a speedy return for her second 2022 LAT puzzle, not long after her February 25, 2022, debut here. In her initial offering she added an "H" to phrases and clued them with wit and charm. Now we have a classic Friday grid that removes the two letter word "IT" from phrases and then clues the resulting new fill. She has a reveal, and uses a symmetrical 10/12/12/10 pattern. The majority of the fill is 4 or letters, leaving me no long fill to highlight. Since the difficulty in the puzzle does not come from long fill lets address the theme and then talk about why this a late week puzzle.

21A. Former spouse who never lets things get awkward?: GRACEFUL EXIT. (10). How nice if you can end a marriage and still get on, even if it is just for the sake of the children. Removing the "IT" in this case does not change much as the understanding ex must have also left nicely.

26A. Outcome when a salon student makes waves?: LEARNER'S PERMIT. (12). On the other hand, when an aspiring stylist is entrusted with the hair of poor soul, the result may be really bad. This is quite different from the ritual of obtaining a driver license.

46A. Luring an academic to the dark side?: TURNING A PROFIT (12). Another school setting, this time your teacher becomes Darth Nihilus rather than running a successful business.
And the reveal, for real
52A. Taylor Swift hit song about defying the haters, and an apt title for this puzzle: SHAKE IT OFF (10).
On to the rest.

1. Frito pie ingredient: CHILI. Does anyone make/eat this TexMex dish? Fritos® Pie. I wonder if puzzles will become like game shows where money is paid to promote products...

6. Percussion-based theater troupe: STOMP. They are quite famous.
LINK.

11. Back in the day: AGO. It is not easy to make a three letter fill hard but this not jump into my mind.

15. SAT prep help, often: TUTOR. We return to education, I taught an LSAT prep course back in the day.

18. See 6-Down: ANISE. 6D. With 18-Across, ingredient in five-spice powder: STAR. Illicium verum is a medium-sized evergreen tree native to northeast Vietnam and southwest China. wiki. 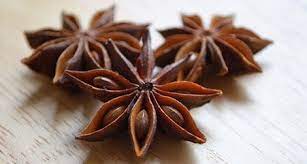 19. Trellis growth: IVY. More plants. When I was teaching briefly in Gainesville I had a student named IVY CREAM. Were here parents progressive or mean?

25. Streisand film based on a Singer story: YENTL. Isaac Bashevis Singer was a Nobel Prize winning author who wrote in Yiddish. The story was published in Mayses fun hintern oyvn (1971; “Stories from Behind the Stove”).

32. Holy __: OIL. I don't think this combination has been used before. COW and SEE are much more likely.

33. Cleared for takeoff?: DEICED. The PROCESS.

38. Many Egyptians: ARABS. Did you know about 1% of the world's population is Egyptian?

40. Domino dot: PIP.  "Pip" has been used not only to denote the dots on dominoes, but also the dots on dice, as well as the marks on playing cards and sometimes as a synonym for "dot" in morse code. Information.com.

41. Day of the Dead drink: ATOLE.  A coffee and cornmeal combination part of the TRADITION.

49. "The City & the City" novelist Miéville: CHINA. I no longer read science fiction nor graphic novels, so the author and the book are complete unknowns.  LINK.

56. Cause of inflation?: PUMP. Oh, how fun, not a tired old saw, but and old tire needing air!

64. Four-time Australian Open winner: SELES. Monica. She appears often not only because of her tennis but also for being stabbed on court.

65. Piano part: PEDAL. I must stop looking at every 5 letter word as a possible WORDLE

67. Utopias: EDENS. The name Eden is of Hebrew origin meaning "place of pleasure." It brings to mind this DISCUSSION.

1. "Hurt" singer: CASH. "Hurt" is a song by American industrial rock band Nine Inch Nails from its second studio album, The Downward Spiral (1994), written by Trent Reznor. Why did he record this in 2002?

4. Kitten caboodle: LITTER. One of the clue writers really has some home runs today. Kit and Kaboodle is a fun phrase.

7. Fish in salade niçoise: TUNA. A French delight, which probably does not delight most.

9. Sauntered: MOSEYED.  A popular word in the old westerns on TV but its origin is unknown.

11. Listing: ATILT. An "A" word; do not worry she is just getting started.

13. Black stone: ONYX.  It is a variety of layered chalcedony that belongs to the quartz family. As indicated by the name, this semi-precious gemstone is characterized by its dramatic black body color. Angara.

27. Word on some European postage stamps: EIRE. A touch of Irish trivia too late.

31. "Fast Food My Way" chef Jacques: PEPIN. A French chef other than Julia Child. Below is a video from when he was younger, he is now 86.

37. Mirror image: SELF. Mirrors reflect backward images; is that how you see yourself.

39. Dyeing art: BATIK. Another clue with a pun to amuse.

41. PDQ: ASAP. As Soon As Possible.  PDQ is an abbreviation of the phrase “pretty damned quick.”

43. Clocked: BRAINED. Apparently this is BRITISH to hit (someone), especially on the head. "someone clocked him for no good reason."

53. Bananagrams piece: TILE.  Bananagrams is an anagram puzzle built for speed — think of Scrabble with no board or complicated scoring. It was developed in Rhode Island.

57. Lahore tongue: URDU. This Pakistani CITY has a very long and complicated history. If you take some time to read the entire wiki article you will understand my comment. I hope our resident expert will stop by and give his input. I learned much I did not know from a Sikh gentleman who worked in a store I frequented.

58. Repast: MEAL. English is so rich from stealing from so many other languages. Re-past is just from the Latin word repascere, which means "to feed."

62. Après-ski option: SPA. Also a choice one can make after, or during solving an LAT Friday crossword. It did not work for me as I kept falling asleep. I trust none of you wonderful people did as you anxiously solved this dynamic, distaff dish. The world continues to spin. Thank you Patti and Karen. Lemonade out.
Here's the grid: