Elizabeth Hardwick on the Capable Coolness of Faye Dunaway 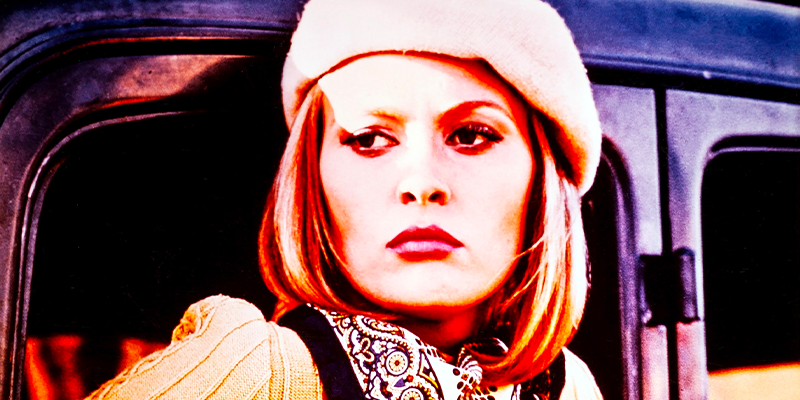 “What I always thought the finest thing in the theater, ever since childhood and even now, is the chandelier. . .”
–Baudelaire
*

A film star is not a character in a book, not a writer with his text to be thought about, not a personage in history fixed by the glue of biography, not one of Byron’s mistresses who wrote and received letters.

A living film star is someone of great visual interest who fills the space on the screen with a certainty of placement and look. With women stars, the face is content, symbol. It reveals and conceals; and, it seems to me, once imprinted upon the mind in a vivid way, it refuses to change its meaning.

A star has played roles, tinting them all with her name, a name chained to the face. A strength of impression makes one a star and there is a certain inflexibility connected with film stars. The hardened, fixed image, so difficult to come by, is a sort of finality and the image goes through its life, its roles, now here at home and now a princess in Russia, poor for this moment and wearing jewels and furs in the next turn.

But it is the star cast in stone we go to see again and again—all quite different from the stage with its distances that blur and mean that the actor must with each entrance recreate himself.

With women stars, the face is content, symbol. It reveals and conceals.

In Network, Faye Dunaway played a woman of villainous ambition. She was extraordinarily high on power—and very, very thin. In the author’s conception, a pomade of old character ideas flattened the skull of the film. The female television executive, Faye Dunaway, slid back and forth on the oil like a watchful, greedy cormorant. The relentless forage will not leave the dark, industrious bird much time and thus it cannot be associated with habits of love or reciprocity. That was the sentiment. The punitive results of ambition are not creditable to reason or to experience, but if a woman were to be a fierce television executive, the choice of this star in no way violates our idea, our film idea, of Faye Dunaway.

In Chinatown, the star was thrown into hermetic immobility by being charged to bear, as if in a permanent mourning, the worst of secrets—a rape by her father that results in the birth of a daughter. The antiquity of the idea did not instruct somehow and the victim, keeper of the secret, naturally did not have much to say. Many silences and black hats.

In Bonnie and Clyde, handsome long skirts and beret, silk blouses with fagoting, the Depression, and a superb cinema death. The bandits were history, homely and rickety and appalling in life, brought to the films, under the chandelier, as it were. It would not do to make too much of Bonnie’s strength, her equality in crime. The bandits are a couple, a love story, with comedy and pity drifting about them. They are accompanied in their travel to the screen by very engaging friends. They are deprived and violently set upon definition, as much as on survival. The pathology of the criminals is bathed in the yearning pathos of the trapped.

Bonnie is a role of great importance to a film star and Faye Dunaway seized it with passion and talent. Sympathy, strangely, seemed to seize the viewers. But Bonnie lives only once and Faye Dunaway is anti-romantic on the screen.

The modernity of her film image seems to rest upon a removal and distance that suggests that, at last, you have only yourself.

The star. Insofar as real life is concerned, the star seems to be either posing or fleeing, hiding or widely smiling. Naive, obsessive fans wait in the cold streets or the hot, wait to draw near, to see, sustained by an agitated patience, restrained and excluded by guards. And the shrouded, protected objects of their patience vanish in their large, dark chariots with such a swiftness.

The fans go off into the night, back to the highway towns, to the old subway and bus suburbs, returning with all their questions unanswered. They are real questions of a sort, about appearance and reality, flesh and spirit. They learn something: that many handsome male stars are very short. (“Why make that little fellow a Captain?” people exclaimed as Admiral Nelson approached his ship.) And, perhaps, they receive another answer. “Oh, beautiful star, can you love me?” No.

Faye Dunaway was born in Northern Florida and went to Leon High School in Tallahassee. She did not have an easy life in her youth. Perhaps there is a little Florida in Bonnie, but the place, the rural, hard scene has been transcended—if that is the proper word.

She does not slyly intrude the irresistible innocence or ignorance, hints from the psyche outmoded by history.

Marilyn Monroe changed for us when we were allowed to discover her biography of foster homes, rapes, lost father, deranged mother. Russian heroines of mixed natures—Grushenka in The Brothers Karamazov for one—began to invade the creamy image. Every image finally looks to rouge or blood.

Poverty, beauty, and ambition are the history for its genealogy. With film stars, we never know whether we are looking at literature of the actress. In Colette, the music-hall singers, the players always traveling about, “the vagabonds”—without poverty, their special actress character could not assume such a touching and complete form. They are creatures with memories. Some will fall.

In Balzac and others, the trusting actress-waif is embezzled by men and she will sink; her little oval face and black curls cannot save her as she gives away her last sou or watches the final trinket turn into the scorned capital of the pawnbroker. There are hard ones, too. Balzac’s Josepha, very canny about apartment furnishings, clothes, and carriages to be extracted from the beleaguered funds of lecherous men. And there are great artists, too: Berma, in Proust. But something of the vagabond, with her makeup, her costume, her acts, and friends in the business, remain like rocks in the flowing image of the actress.

The films have always turned women stars into men—at least in possibilities to impose the anarchic will.

In the films, it has always been otherwise. When we think of female film stars, we think of power and money. What was not so long ago a girl back home is now a millionairess.

Power and money and hired persons, managers and hairdressers, abandoned lovers and a superfluity of husbands. This is not new. The films have always turned women stars into men—at least in possibilities to impose the anarchic will. No doubt this sense of the will—and what is celebrity gossip except our participation in the details of the impudent will?—enchants the dreaming teenager. Beauty and dancing lessons turned into striking performance that will return love and power by way of dollars. But in the movies, the frenzy of appearance, in all its assaulting shapes, can deform and disillusion and many tell us the ice-cream cone is filled with ashes. No surprise considering a like discovery by the rest of us.

On the screen, there is something in Faye Dunaway that creates unease, a dislocation of feeling. The puzzle is contemporary, modern, rather unsettling. She arrests the attention by many negations, by what she is not. The face almost flat, with a peculiar flat smoothness. She does not possess a large mouth or round, floating eyes to be insisted upon as the identification that announces presence.

Coolness, indeed. This fatality for actresses, one they fear, is the source of her interest, for me at least. She does not slyly intrude the irresistible innocence or ignorance, hints from the psyche outmoded by history. Narcissism also, the flat, harmonious face unchanging, reflecting upon itself, but classless and not especially American. She might be European, international.

On the screen, there is something in Faye Dunaway that creates unease, a dislocation of feeling. The puzzle is contemporary, modern, rather unsettling.

The cool narcissism is combined, in her roles and in what she seems to be on the screen, with an unexpected circumstance hard to name. Capability, perhaps. In her typical appearances, she does something; she has a profession or a job of a striking sort. She has been a television executive, an insurance adjuster (The Thomas Crown Affair), and in her last film, Eyes of Laura Mars, she was a successful fashion photographer.

She does not strike one as, first of all, a lover or a mistress, a wife or a daughter, although, of course, she will have to appear to be at least a lover in the service of plot. A peculiar presence, suitable to the seventies in many ways.

Female film stars: I am interested in the deterioration of their affability, their reasonableness, as a condition often increasing with their power. The art of the film is divided among so many that those on the outside find it hard to credit so much perversity, recalcitrance, waste, uncooperativeness.

Perhaps, a woman can practice such reversals only at the bottom or the top. At the bottom, miserable oppressors of children and family cast their black lights from an inner gloom and represent the manipulations of dependency. The dominant-dependent woman ruling by disguises and distortions, always on the alert to restrain the freedom of others, to create guilt—this is a sad fact of energy and sense of self shackled by circumstance, custom, or the defeating caprices of character. It was so often the rule in the home, the revenge of wives.

The trouble-making independent woman is another matter. It is, perhaps, the independence itself saying: what can you do about it? A question most of us have heard more than once, but directed to us rather than from us. The star system gives license. To meet a flatterer tells you a good deal about where you stand in the world. Faye Dunaway is thirty-eight, childless, has been married only once and that once not so long ago. She is said to be difficult, temperamental. All reigns are autocratic.

The cool narcissism is combined, in her roles and in what she seems to be on the screen, with an unexpected circumstance hard to name. Capability, perhaps.

Money and the attendance that follows it separate a film star from other women, even others of outstanding success. In the films, everything is extreme, in multiplication, and what is left that might be called ordinary becomes eccentric by its mere existence. We read in the newspapers that stars are not happy people always. Choice allows one to make mistakes and privilege allows you to make a lot of them.

To play the old stories in the seventies pushes the imagination into a retrograde state, even if the players are, so to speak, in modern dress. Faye Dunaway does not have the expressive contemporaneity of attitude found in Jane Fonda or Vanessa Redgrave, the glow of opinion and action that comes to some degree from their life outside the films. She is not polemical, but she is dominating as a woman.

She seems to be expressing a solitariness that is unusual, anti-romantic. In the romantic aura, there is a leaning on, an openness to desperation and to the hurt of misplaced trust. The modernity of her film image seems to rest upon a removal and distance that suggests that, at last, you have only yourself.

Perhaps that is not what she means or admires or what she is in life. She is not reassuring. The sense of equality, not to mention domination, may be a bit chilling to the conventional, particularly to the conventional man. But, to the thoughtful, the electricity of the negative qualities gives her an extraordinary interest. 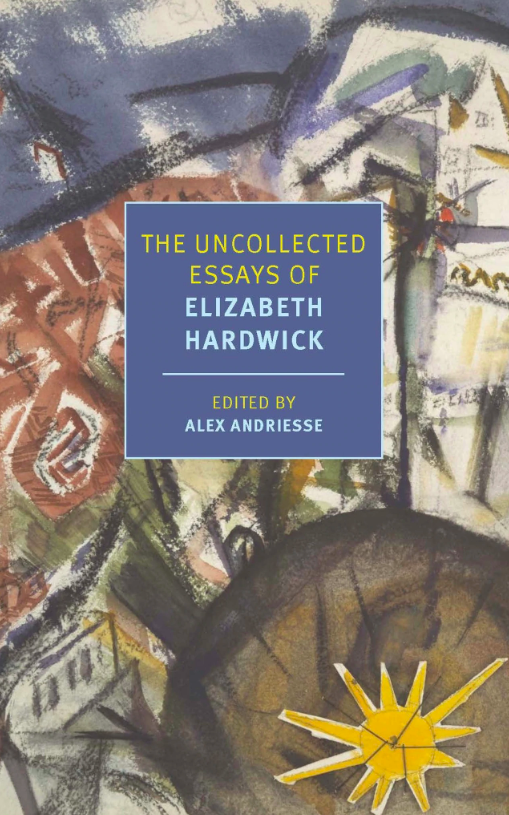 Excerpted from The Uncollected Essays of Elizabeth Hardwick, edited by Alex Andriesse. Copyright © 2022. Available from NYRB.