e-Pocalypse: The Digital Dystopia is Coming by Steve Bellinger 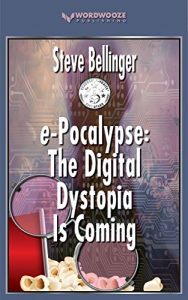 Matty Williams’ retirement as a computer tech goes awry when he and his girlfriend Divvie discover that new social technologies are subtly affecting the minds of their users. As they delve deeper into the technological marvels revolutionizing the lives of virtually everyone on the planet, they are set on a course that leads directly back to their employer, Roydon Technologies.

Now there’s the latest gadget, augmented reality glasses known as “Augies,” that can literally recreate reality for the user, all controlled by the ruthlessly efficient global computer system with the deceptively reassuring name of NANA.

Will Matty, Divvie, and their super geek friend, Howard, save humanity from a life of programmed subservience, or will their attempt to thwart NANA result in something even worse?

Technology can be a double-edged sword.

Matty was a complex and fascinating protagonist. There were times when I wondered if he’d ever move past his deep-seated distrust of new technology and social media, but his rants about those topics did make sense when viewed in the context of his backstory. I liked the fact that his occasional surliness in these areas was so well explained. It gave his personality a lot of depth and made me wonder what would happen to him next no matter how far I read into his tale.

Sometimes I struggled to keep up with the large cast of characters. Part of the issue was due to how quickly many of them were introduced in the first few scenes. Another piece of the puzzle had to do with how often characters were introduced with only a few details about them as individuals. As much as I otherwise enjoyed reading this book, having a clearer understanding of who all of these folks would have bumped it up to a full five-star rating.

The pacing was well done. At first I found it a little slow to be honest, but I rapidly changed my mind about that once I realized how many subtle hints were embedded into the plot about what was really going on with the Augies and all of the hidden messages in the various forms of technology in this universe. This is something that should be read slowly and carefully. It expects readers to put in a certain amount of effort into piecing the clues together regardless of what does or doesn’t seem to be happening in the storyline. I was quite pleased with how Mr. Bellinger pieced everything together here so seamlessly.

e-Pocalypse: The Digital Dystopia is Coming should be read by anyone who likes reading about technology and the ways it can be misused.