by admin June 3, 2021
National Donut Day is tomorrow. There are many appropriate ways to celebrate what is obviously the most important component of the day: eating donuts. You can dress up, learn donut history, browse through recipes, relieve stress, decorate your room, hand out stickers, take a nap, do a puzzle, and enjoy a silly story. You can also draw some donuts. My inspiration came from the Doodlewash book I shared with you about six weeks ago. Affiliate links here and throughout the post. 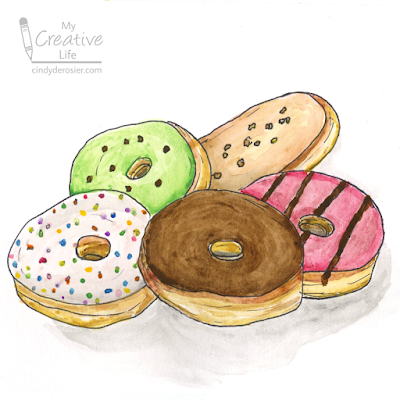 Start by drawing a rough oval in the lower middle of the paper. This will be the icing of the donut in the foreground. Donuts are usually fairly irregular, so don't worry about perfectly smooth curves. Add the cake portion of the donut below by extending short lines down from the sides of the donut, then connecting them with a curve. Then draw the small oval hole in the center of the icing.
Use the same technique to add a donut on either side of Donut #1. No lines from Donut #2 or #3 should cross Donut #1.
Working toward the top of the paper, continue adding donuts. I added a maple bar (one of my favorites) in addition to a fourth round donut. There really is no right or wrong, as long as the lines of the donuts in the background never cross a donut in the foreground.
When you're happy with the number of donuts, add toppings. I put sprinkles on one, a drizzle on another, and nuts on my maple bar. 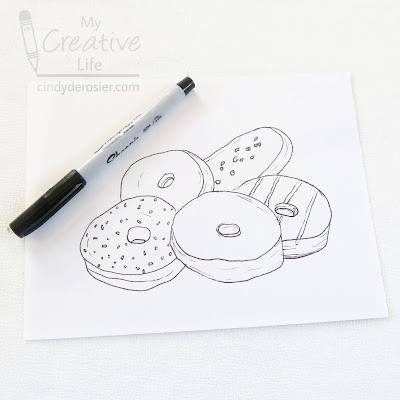 I ended up adding chocolate chips to the mint chip donut. It's ok to add the details later.
Now start painting! I painted the icing on all of the donuts (in the same order that I drew them) before painting any of the cake portion. To make them as realistic as possible, I decided where my light source would be (around 11:00) and left lighter areas where they would naturally reflect. I darkened the edges and the areas around the holes.
Next, I painted the cake portion. I used watery yellow and browns to mimic the way donuts are cooked. The darkest color is closest to the icing, with the next darkest near the base, and a lighter section between those. I also painted the holes where the cake portion shows through.
With the icing dry, I painted in the toppings. The sprinkles were the easiest and most fun to do. I think the drizzle should have been thicker and more irregular in retrospect.
Finally, I used a very watery grey to add shadows below the donuts, in the holes, and anywhere one donut would shadow another.

Happy National Donut Day tomorrow, however you celebrate!
Back to Feed
Use left/right arrows to navigate the slideshow or swipe left/right if using a mobile device