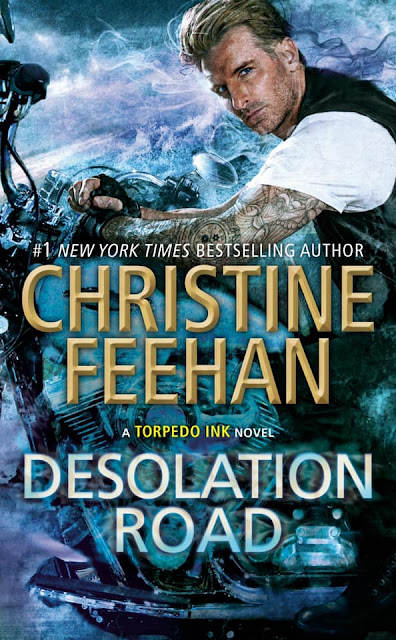 Torpedo Ink is Aleksei “Absinthe” Solokov’s whole life. They’re his brothers, his family—his everything. But that doesn't stop him from wanting something that only belongs to him. That’s why the tough biker has spent the last six weeks at the library, reading every book he can get his hands on and watching the prim and proper librarian who makes his blood rush.

For the past six weeks, Scarlet Foley has been fantasizing about the handsome, tattooed man whose eyes follow her every move. She senses he's dangerous. She wants him to get close enough to touch. She wishes she could let him know the real woman, not the one she pretends to be. But Scarlet has a plan to carry out, and she can’t afford any distractions.

Absinthe is well aware that Scarlet is hiding something. She’s a puzzle he intends to solve, piece by intoxicating piece….

Scarlet is a local librarian that Aleksei “Absinthe” can’t get out of his head. No woman has ever affected him the way Scarlet does. He has his demons and Scarlet quiets them. When he finally asks Scarlet out the connection is immediate and they both see it, but Scarlet has secrets too and now the Torpedo Ink will do whatever it takes to give Absinthe the woman of his dreams and make Scarlet’s troubles disappear.

I appreciate the imagination used in the creation of this story. I liked that Scarlet was doing whatever it took to get revenge on the persons who caused her pain. There is an uncomfortable element of abuse, lots of cringy moments and I must admit I skimmed over their “kink” as much as possible because I didn’t care… There were a lot of kink moments, entire chapters, and it still kept going and going. For me, Desolation Road needed more balance, I was good with the overall story, it just got bogged down by the highly descriptive kink, that I really cared less about, which disconnected me from the characters.

I received this ARC copy of Desolation Road from Berkley Publishing Group. This is my honest and voluntary review.
Back to Feed
Use left/right arrows to navigate the slideshow or swipe left/right if using a mobile device