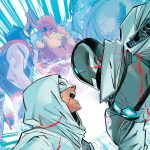 Ray: This is probably the most fast-paced series in DC’s stable right now, a globe-trotting adventure that rips from one country to another as Ghost-Maker’s team faces off against assassins and rogue vigilantes to protect the infamous criminals who taught Ghost-Maker—and Batman. Most of the issue is just a series of fight scenes and doesn’t distinguish itself from the last few too much, but whenever the mysterious Phantom-One is on the page, it stands out in a big way. This character has been a compelling villain—and one with a double agent within Ghost-Maker’s circle. The reveal here is very good, and what makes this plot about Ghost-Maker’s failed sidekick so compelling is that his grievances are 100% valid. Ghost-Maker has done some despicable things in his life—and continues to—and much of the events of this series are his own sins coming back to haunt him. That he and his team are still so compelling is a testament to how good Brisson is at writing anti-heroes.

Ray: This series changes its style and tone quite often, with last issue being a rather intense Court of Owls mystery. By contrast, this issue actually feels much more like a classic Scooby-Doo mystery with Batman only playing a small role. Batman tips off the Mystery Machine gang to a series of hauntings in a beach town, and they trace them back to a mysterious psychic. She helps people get in contact with their loved ones, and then the loved one comes back as an angry spirit and steals a precious object from their life. It just so happens that Velma’s recently lost a goldfish, so she’s the perfect bait to draw out the villain—all the while Shaggy and Scooby eat a lot of hot dogs. This is a pretty light story, but it does have some clever twists towards the end and continues to paint a fun picture of what it would be like if Batman and those “meddling kids” actually had a regular working relationship.

Ray: This series has some pretty tight plotting as it fleshes out the usually-unseen world of New York in the DCU, but it also tends to fall back a lot on soap opera tropes—never more so than in this issue. Last issue revealed that Tanya wasn’t Jace’s mother, and this issue finally explains that—he’s the result of an affair between Lucius and one of his employees, and the tensions have been simmering under the surface of the Fox family ever since. This also makes Jace biracial—his birth mother is Asian—and I don’t think the art does a good job of conveying that. The Fox family dynamic is in shambles, but there isn’t too much time to reflect on that, as Jace has to rescue his birth mother from the deranged conspiracy theorist Ezekiel King. Tiffany Fox gets to enter the fray in a big way this issue, and she’s probably my favorite part of the series at the moment. I’m just not sure these developments are good for the Fox family long-term.

Ray: I’ll say this for the latest incarnation of the Wildstorm super-team—it knows its roots. Unlike past versions, it doesn’t try to be gritty or noir-inspired—it embraces its 1990s heritage complete with colorful costumes. With the WildCATS doing their black-ops thing, Marlowe has decided to create a new public team known as the Seven Soldiers of Victory—incorporating members including Majestic and Maul. Grifter doesn’t take well to one recruit in particular, and proceeds to get him kicked off the team. As the WildCATS are sent to recover a kidnapped boy, Grifter goes rogue to track down a Court of Owls infestation. The plot continues to be fairly lackluster, but the action is top-notch, including a high-octane helicopter escape segment that closes out the issue. It’s been a while since there was an in-continuity Wildstorm title that really added anything new to the DCU, maybe because these characters just don’t stand out in a world of Gods.

Ray: Any story that teams up Batman and the Joker is likely to have a dark edge to it, and Marc Silvestri has always been a creator whose tastes trended towards the macabre. But after three issues, this series is pretty overwhelming in its bleakness. With Joker locked up in the Batcave, Batman tries to solve a twisted puzzle set by the villain—a Sophie’s Choice forcing him to pick which of two parents should survive, with a cruel twist. Meanwhile, Alfred and Nightwing try to unlock the origins of the strange mutated Joker creatures terrorizing Gotham. It all comes down to, as it usually does in Gotham, a personal tragedy. An old associate of Bruce’s has lost too much, and may have revived an old experiment for revenge. Batman is always an angry character, but here he barely seems in control at any given moment. It has some good visuals, but overall the strange plot and bleak tone don’t serve the book particularly well.

To find reviews of all the DC issues, visit DC This Week.

Click through to read all of "DC This Week Roundup – Gotham City Misfits" at GeekDad.If you value content from GeekDad, please support us via Patreon or use this link to shop at Amazon. Thanks!