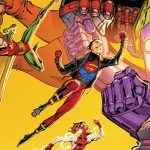 Ray: For most of this series, the main puzzle has been why everyone has been acting so out of character. The Cassie back on Earth, along with the surprisingly caustic Cissie, are out of action this issue while we concentrate entirely on the three boys who have found themselves in their “Dream world”—along with another Cassie who resembles her classic YJ era self, but somehow off. The trio of heroes have found themselves up against the heroes who are sort of their personal arch-enemies—Captain Boomerang, who killed Robin’s father; Deathstroke, who maimed Impulse; and Superboy’s evil “father” Lex Luthor. The trio seems picked to personally test them, and they pass with flying colors—while Cassie really doesn’t do much but cheer them on from the sidelines. It’s all a little too neat, a little too wish-fulfillment, and Impulse is surprisingly the first one to notice.

This book seems to be interested in breaking down some of the problematic dynamics of the original Young Justice team. Sometimes it doesn’t really work—like Cissie’s rant last issue about leaving because the team was such a boys’ club. But sometimes it hits on something real, like the way Bart was always treated like a joke by his teammates because of his hyperactive nature, while he’s actually one of the most observant and savvy heroes due to his lightning-fast mind. He’s one of the first people to notice the seams around this world, and the way it all seems to come back to Cassie. As things start to fall apart, Cassie visits the boys one by one—each time presenting them with a personal temptation, or a way to unravel their belief in their teammates—and when they reject her, she sets the next stage of the plan in motion. It’s a fun, creepy issue that makes a lot of things a lot clearer as we head into the next act.

To find reviews of all the DC issues, visit DC This Week.

Click through to read all of "Dark Crisis: Young Justice #3 – The Illusion Slips" at GeekDad.If you value content from GeekDad, please support us via Patreon or use this link to shop at Amazon. Thanks!