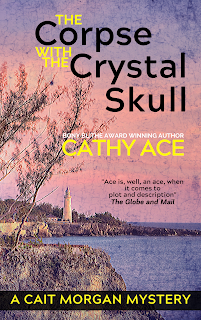 Fancy a quick getaway...to Jamaica? If so, why not join me - now? It's where my latest adventure happened, and this is how it all began...

Breakfast and a Body

The conversation around the breakfast table was understandably muted; we’d all had a late night, and I, for one, was feeling the effects of a few too many G and Ts. My darling husband, Bud, surveyed the food arranged on the mahogany sideboard with bleary eyes. His more-salt-than-pepper hair was still damp from the shower, but he was already sweating through his shirt; May in Jamaica can be exhaustingly humid.

“Anybody want another mango? Or this last piece of banana bread?” Bud’s tone lacked enthusiasm.

John Silver shook his head above his coffee cup, then scrunched his eyes, suggesting he wished he hadn’t made such a rash move. “Thanks, no,” he croaked, with a polite smile I read as a grimace.

He looked tired; wiped out, in fact. I’d first met him when he’d helped out with a family matter in Amsterdam that Bud and I had been looking into, less than a year earlier; back then he’d looked vigorous, and in his prime. Now? He’d aged. A lot. I wondered why. Maybe it was work-related; I’m still not entirely sure what he does – he somehow provides coordination between a number of secret service operations around the world…lots of opportunities there for stress, I’d have thought. He looked as though he needed the week-long break he was just beginning with us.

“Anyone fancy a Caesar?” Bud’s other ex-colleague, Jack White, forced a smile; they’d served together in the Vancouver Police Department for years, forging a friendship that had endured beyond their respective retirements. Jack glanced at his wife with a wink, rubbed a hand through his rapidly thinning hair, and groaned.

Sheila tutted and wagged a friendly finger at her husband. “No alcohol for you for a while, I think, dear.”

A subdued chorus echoed my sentiment.

I gulped some juice. Sadly, it was far from cold; even at nine in the morning the dining room was already stifling, and the ice in my glass had melted quickly. Overall, I was enjoying the faded grandeur of the big house at the heart of the private estate we’d rented; the colonial style building was a symphony of white walls, dark hardwood floors and beams, and furnishings upholstered in scrambled egg-hued chintz patterned with bottle-green palm fronds.

Occasionally, breezes wafted through the openings in the walls which housed dark-wood jalousies with slats that could be shuttered against the weather. However, I yearned for the luxury of air conditioning; the two large ceiling fans above the dining table were turning as fast as they could, but the result was about as refreshing as using a hairdryer in a sauna. Luckily, our private bungalows on the estate were so compact they had better through-draughts than the main house.

Bud came to sit at the end of the gleaming mahogany table beside me. I closed my eyes as his chair scraped across the floor. It didn’t help.

“Will Lottie be joining us?” Bud sounded almost cheery.

Every bloodshot eye in the room turned, slowly, toward John Silver, who replied, “She was taking a shower when I left.” He checked his watch. “A long shower, by the looks of it. I dare say she’ll be along in a bit.”

“I suspect she’ll be in better shape than any of us,” I ventured.

“Good morning all. What a beautiful day. It looks as though it’s going to be sunny, at last.” Charlotte Fortescue – Lottie to her friends – waltzed into the dining room in a swirl of periwinkle silk chiffon, bouncing blonde curls, and a waft of fruity perfume. She looked irritatingly fresh, which I put down to her being about thirty, whereas I’d turned fifty a couple of weeks earlier – hence the festivities the previous night.

Of course, that hadn’t been the original plan at all. Initially, Bud and I were supposed to be alone at the Captain’s Lookout Estate, on the northern coast of Jamaica, for an entire month. Then Bud had somehow managed to invite Jack and Sheila to join us for a fortnight, then he’d also gone and asked John and his “plus one” to come along for our final week.

Fortunately, I’d been alone with my husband for My Big Day; that had been my choice, and Bud had understood. At least, he’d said he understood. The fact that one specific day or date makes a difference to a person’s life is something I’m happy to acknowledge to myself, and even to Bud. But to have to party to order? No. Not for me. Really. Besides, I knew that fifty was a significant age, and I hadn’t been looking forward to becoming it at all; once you hit fifty it’s almost impossible to convince yourself there’s more of your life ahead of you than behind, and that’s a difficult pill to swallow.

Jack and Sheila White had arrived about a week ago, and they’d busied themselves with all the standard tourist trips: marvelling at the sandy beaches; ogling magnificent waterfalls; being punted along a winding river, and wondering at all the watersports that seem to enthrall so many. I have no idea what’s so inviting about being bounced across the ocean on a giant banana, but – apparently – it’s all the rage.

It had been agreed that we’d wait until John and Lottie had completed our party to…well, party. Last night’s belated birthday celebration had left me feeling crumpled and haggard, bleakly realizing that the passing years make a heck of a difference when it comes to recovering from a long night of over-indulgence.

A feeble chorus of “Good mornings” acknowledged Lottie’s arrival; she kissed John on the top of his slightly balding head, then all-but skipped to the buffet dishes. I focused on my juice, so I didn’t have to see her gratingly lithe back wriggling about beside the fruit plates.

When the wailing reached our ears, we all turned toward the French doors. Amelia LaBadie rushed into the dining room from the lush tropical garden beyond. She held onto the door frame to support herself as she caught her breath. Usually smiling above her immaculate, cobalt-and-white striped dress, the woman who had been our cook, cleaner, and server during our stay was surprisingly dishevelled; sweat was trickling down her face, and her braided hair had tumbled from its topknot.

Bud, Jack, and John were all out of their seats in seconds. I put down the last bit of my banana bread, and felt the energy in the room shift. Seismically.

“Mr. Freddie. Him on the floor, up in the tower. I see him through the keyhole. There be a lot of blood. I think him…him…”

She collapsed into John’s arms.

“Oh, I say!” was all Lottie Fortescue could manage.

Want to find out more? You can catch up with Cait Morgan, her husband Bud Anderson, and their friends HERE

if you revel in puzzle mysteries set in exotic locations with a cast of enigmatic characters, this one’s for you." crimefictionlover.com
Back to Feed
Use left/right arrows to navigate the slideshow or swipe left/right if using a mobile device