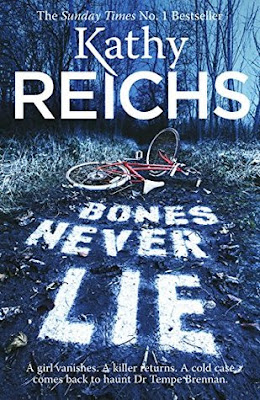 Kathy Reichs is an absolute star, as far as I'm concerned. She has written (as far as I can tell) nineteen books in the Bones series, of which I have read three : Devil Bones (the 11th book), Bare Bones (number 6) and now Bones Never Lie, which is the 17th book in the Temperance Brennan series. What I really love is the fact that you can dip in and out of the series at will, without losing anything major. I hate reading novels that constantly harp back to events or characters from previous episodes that you may well have missed out on, so this, along with her enjoyable and exciting writing style, is why she gets my vote. Picking up a new Bones book is like sitting down to watch a blockbuster movie - you know you're going to get a fun and nail-biting ride without needing any real brain power to work it all out !
Bones Never Lie starts off with forensic anthropologist Tempe being summoned to a meeting at work. She may not be feeling great, suffering from a bad cold, but things are about to get a lot worse. A child has been discovered dead and a DNA sample from the scene has matched with someone on file : Anique Pomerleau. Anique is Tempe's "one that got away", her Achilles heel who she can never forget. She came to light some ten years ago in Canada, where she killed a string of girls before narrowly avoiding escape from Temperance and her partner, police detective Andrew Ryan.
The police team, down in Vermont and North Carolina, want Temperance back on her tracks, along with her ex-partner. The problem is, he has disappeared, so her first job is tracking him down and convincing him to come back to work. Easier said than done, but luckily, Temperance's elderly mother has a few sneaky tricks up her sleeve for finding out important information !
With Ryan and Brennan investigating in both Canada and America, it doesn't take long for them to hunt out clues and fit the pieces of the puzzle together. When they eventually manage to locate Anique Pomerleau though, they are still far from solving the series of crimes.
It's an exciting read, which successfully shows the adrenalin rush of following up clues as well as the frustration of not knowing where things are leading. I particularly liked the character of Tempe's elderly mother, who manages to dig out vital pieces of information online, despite her ailing health. The women seem to be particularly strong characters in general, in fact, as the men mainly seem to be involved in a never-ending battle of the egos or nursing old wounds.
If you like crime fiction, this is a great series to pick up.
star rating : 5/5
RRP : £7.99
Back to Feed
Use left/right arrows to navigate the slideshow or swipe left/right if using a mobile device