Here’s our official list of the best Oculus Quest 2 games for kids and adults! 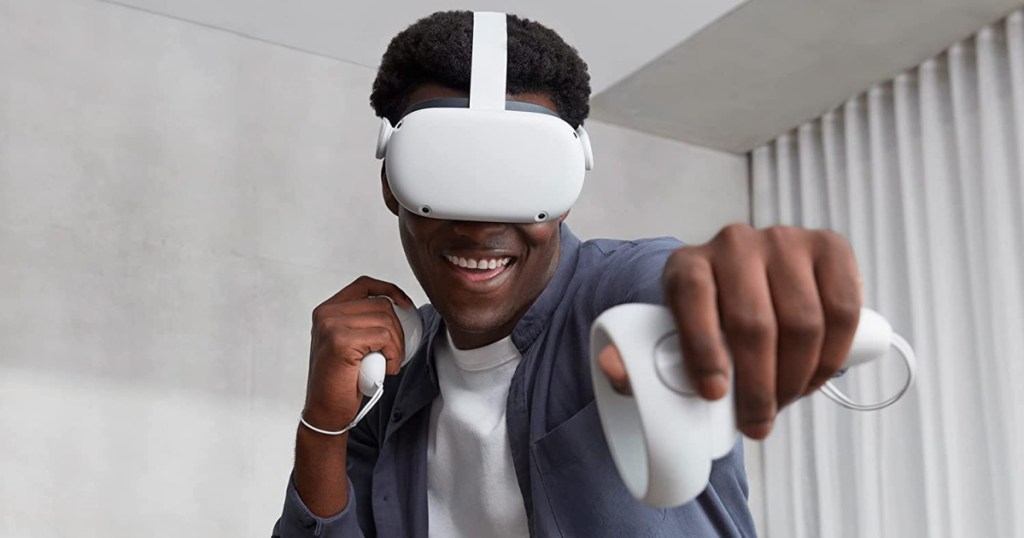 If you’re a fan of virtual reality, the Oculus Quest 2 gaming system (also known as the Meta Quest 2) can provide you with the immersive experience you desire. The Oculus brand is a hit with the Hip2Save community and we love hearing which games readers have been playing.

Since this popular VR system is at the top of many people’s wishlists, we decided to compile a list of some of our readers’ favorite games to play. Whether you’re looking for the best Oculus games for kids or the most exciting games for adults, our list has a recommendation for you! Many of these games can be played on the Oculus Quest, Oculus Quest 2, and even the Oculus Rift. Plus, some of our picks are even FREE!

Scoop up these games, deals, and free offers while they’re available! If you are unsatisfied with your purchase, you can return it for up to 14 days as long as you haven’t played for more than 2 hours!

1. Gorilla Tag is one of the best FREE Oculus games for kids. 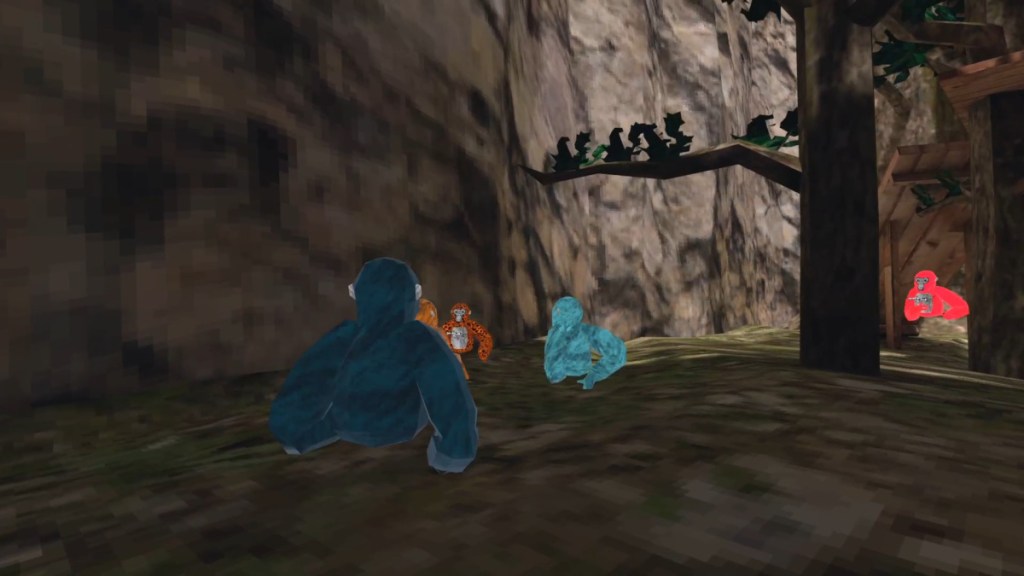 Tons of readers wrote to us to tell us how much their kids love Gorilla Tag. This virtual reality game lets you pretend that you’re an ape in a variety of scenes. You’ll run, jump, climb, and even escape all by using your hands. Better yet, this fun game won’t cost parents a dime! 🦍

“My boys love gorilla tag although they always have sore arms the next day 😂 “ – Dana, Hip2Save reader

“My kids are obsessed with Gorilla Tag.” – Melissa, Hip2Save reader

2. Rec Room is one of the best FREE Oculus Quest 2 games. 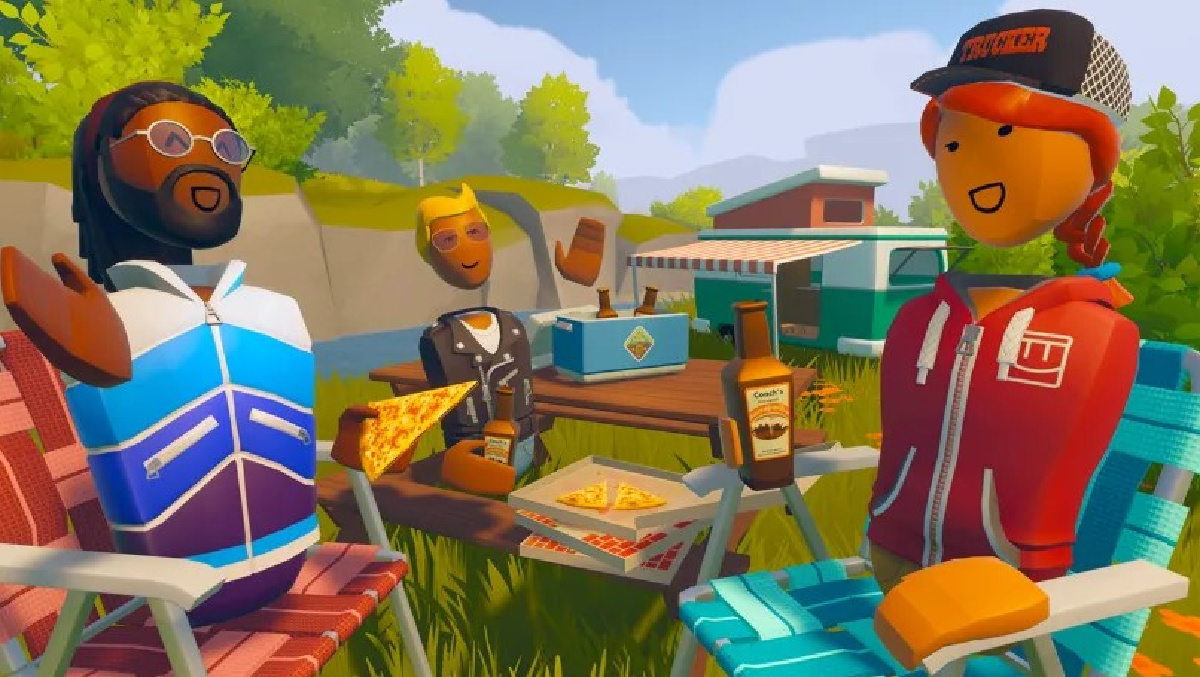 Rec Room is a free Oculus Quest 2 game that allows you to connect with others in a variety of settings.  Play games other creators make or even try to build your own. You can use the Maker Pen to create anything you desire – from objects to entire worlds! This game even got an endorsement on the Hip2Save Facebook page from YouTuber Matthew Quinlan.

“An excellent, FREE family-friendly game where you can access many ‘Wii-Sport’ type games with others online, and hundreds of fan-made games.” – Shane, Hip2Save team

Put on your armor and get ready to play! You’ll play matches, defeat your enemies, and even make allies in this exciting multiplayer game that’s rated as one of the top free games for the Oculus Quest 2.

“Echo VR is a fave free one so far.” – Alicia, Hip2Save reader

“We love the echo VR tutorial…we make everyone try it as their 1st VR experience” – Shellie, Hip2Save reader

4. Get your adrenaline pumping with Epic Rollercoasters. 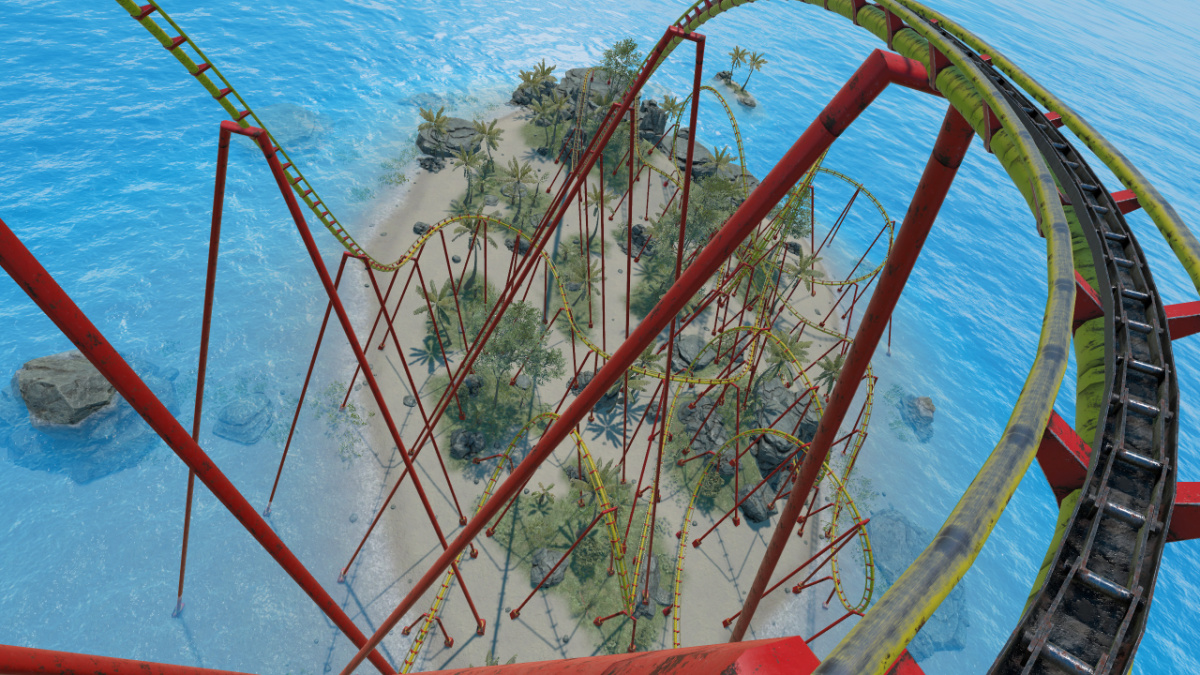 Thrill seekers may enjoy Epic Rollercoasters, the Oculus game that lets you experience hair-raising rollercoaster rides. You can enjoy a classic roller coaster ride or make the game more exciting by defeating enemies in shooter mode or driving fast in race mode. Hip2Save’s Liza says her daughter loves it! 🎢

“We love the roller coaster one!” – Doris, Hip2Save reader

5. Spoil the fisherman in your life with a FREE game of Bait! 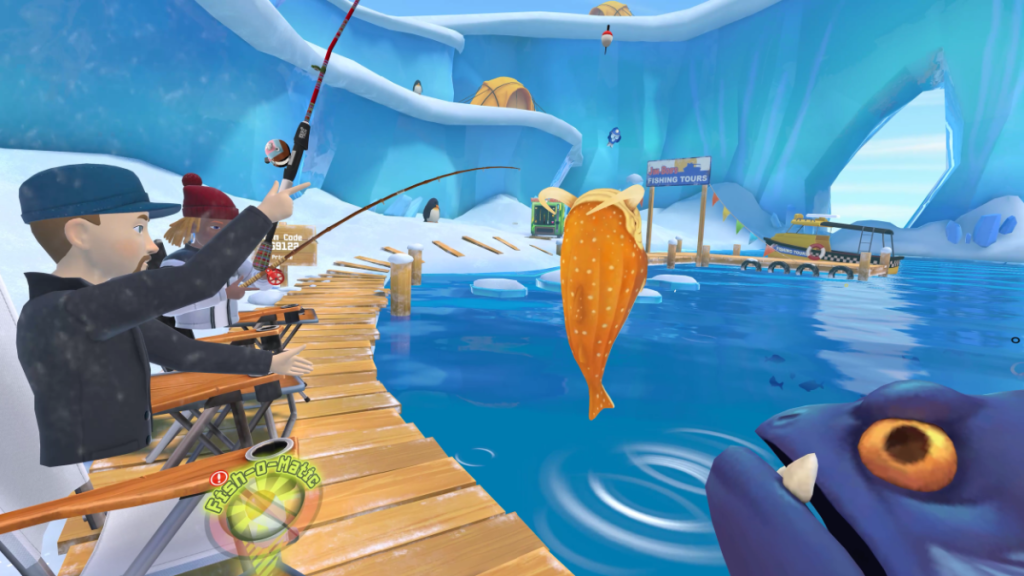 This game is reeling in fans – hook, line, and sinker! You’ll explore 7 different lakes and catch over 60 different types of fish! Have fun trying out different rods, reels, and bobbers. You can play alone or play multiplayer! 🎣

6. Pavlov Shack is one of the best first-person shooter games for the Oculus Quest 2. 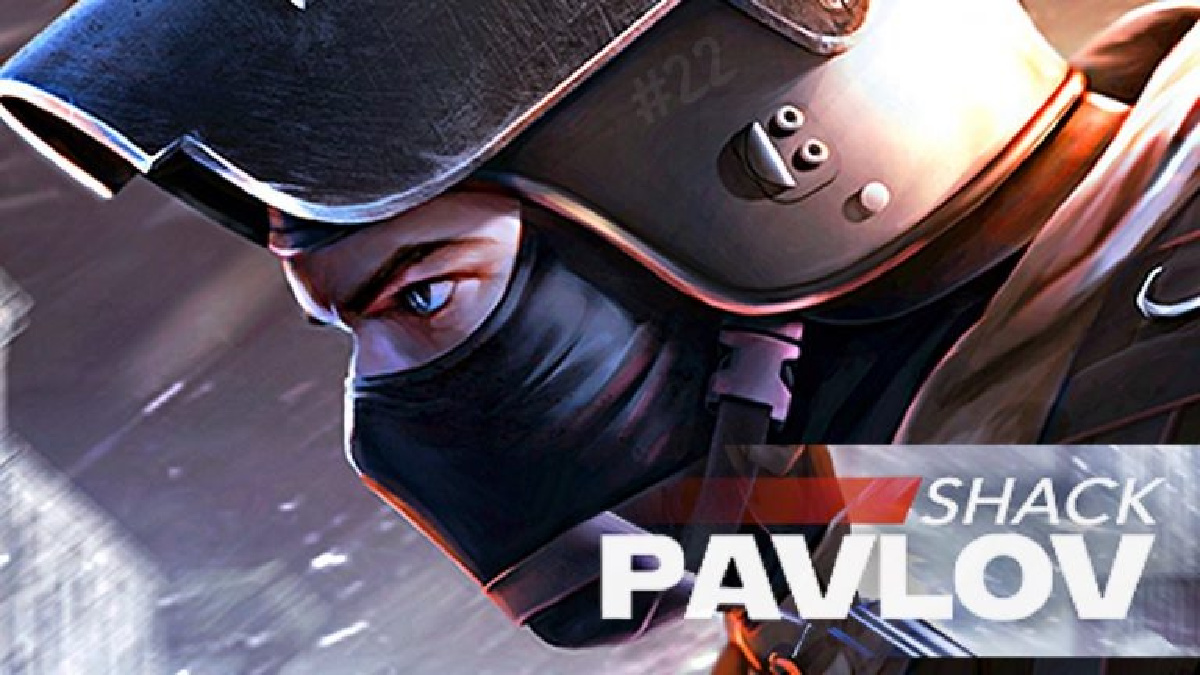 If you’re a fan of first-person shooter games, give Pavlov Shack a try. This game has realistic weapon mechanisms and can be played in both competitive and social modes. Right now you can play the beta version for free!

1. The award-winning Beat Saber is the most popular Oculus game hands-down. 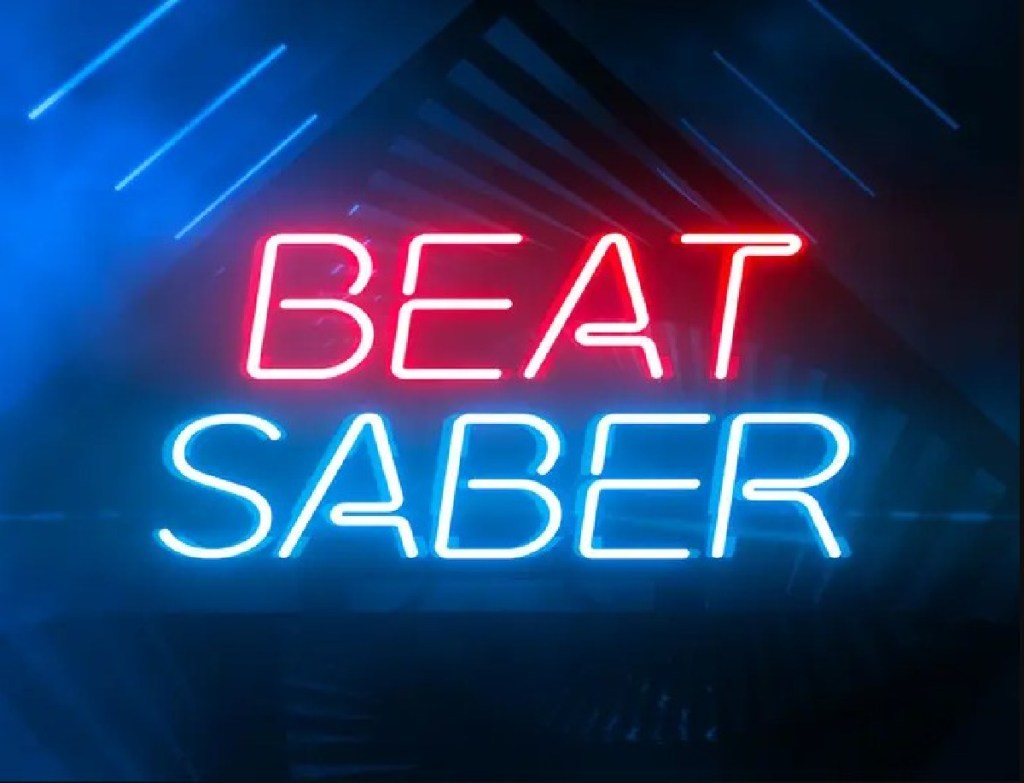 The results are in and Beat Saber is the all-around most popular game within the Hip2Save community. It was mentioned no less than 40 times when we asked readers about their favorite games.

If you’re not familiar with it, imagine the old-school Guitar Hero but with lightsabers! Scoring points is simple (in theory). As the beats of music fly towards you, use your best Jedi moves to slash them with your lightsaber. You’ll be working up a sweat before you know it! 🎵

“Beat Saber is seriously so fun and basically counts as a workout. My kiddo loves to challenge me to beat her scores.” – Liza, Hip2Save team

“Quite possibly the most addicting AND sweaty game I’ve ever played. If you want to work out and have a blast doing it, I highly recommend it.” – Shane, Hip2Save team

“Beat Saber is the favorite here. Not free but worth the money.” – Lindsey, Hip2Save reader

2. See if you can survive the chaotic world of SUPERHOT VR. 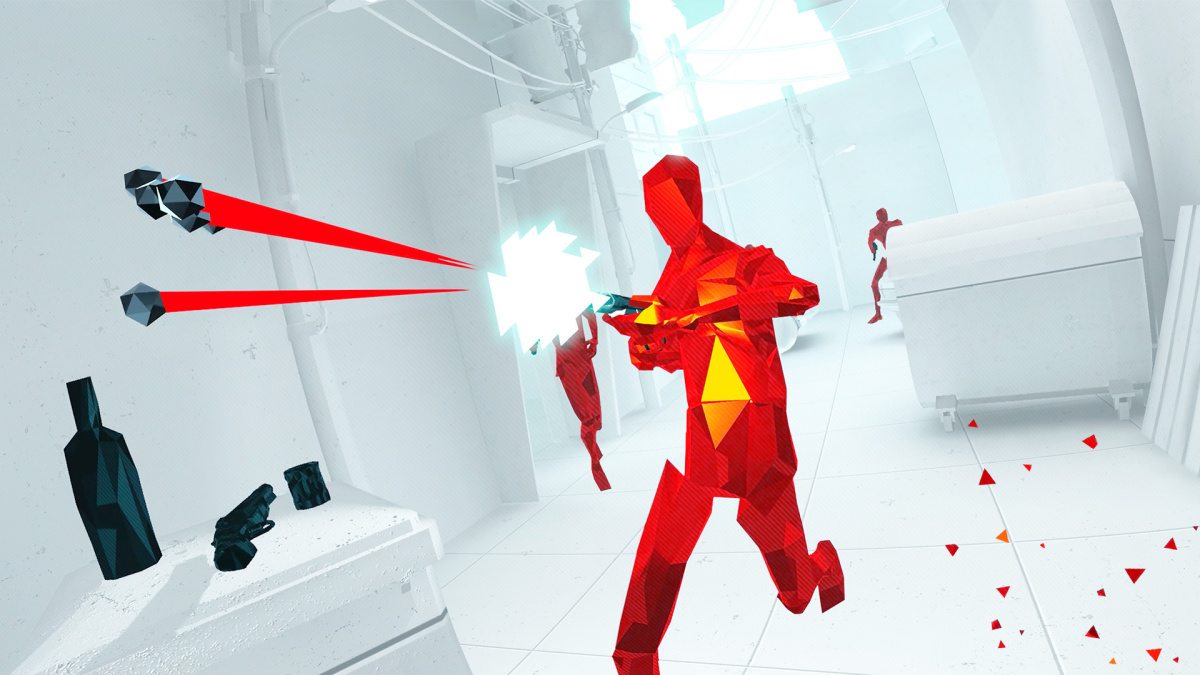 This award-winning game is ready to give you a challenge. Your character is alone, outnumbered, and outgunned. Use all your skills to dodge bullets, shoot enemies, and find useful weapons. You don’t get any regenerating health bars so you’ll have to try, try again until you figure out how to win. 🤺

“Super Hot is a fav of my teens and all their friends!” – Jennifer, Hip2Save reader

3. Thanks to Job Simulator, going to work has never been more fun. 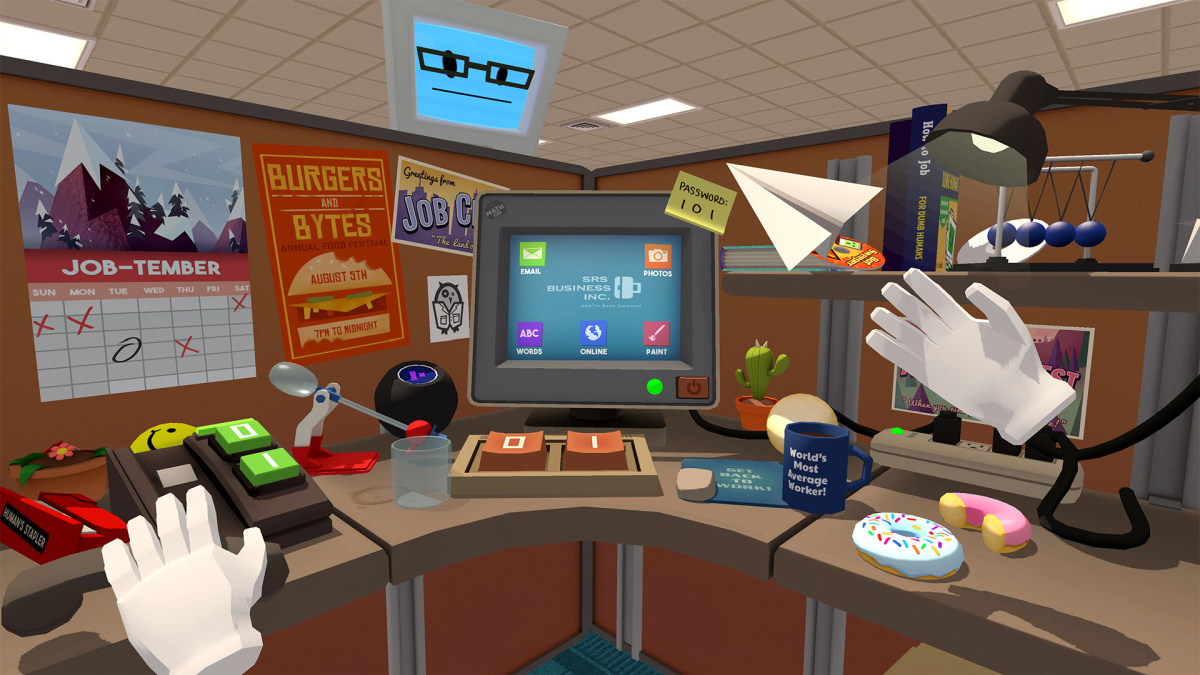 Ever wondered what it would be like to do a certain job? Thanks to Job Simulator, you can find out! This unusual game sends you to work in a variety of settings. If you’re wondering if people voluntarily want to work, they do! Job Simulator is one of the most popular games for Oculus. Hip2Save’s Shane likes it too and he says it’s possibly THE BEST introductory to virtual reality gaming.

“The first thing my grandsons (11 and 13) wanted to get was Job Simulator.” – Shirley, Hip2Save reader

4. Score a hole-in-one when you play Walkabout Mini Golf. 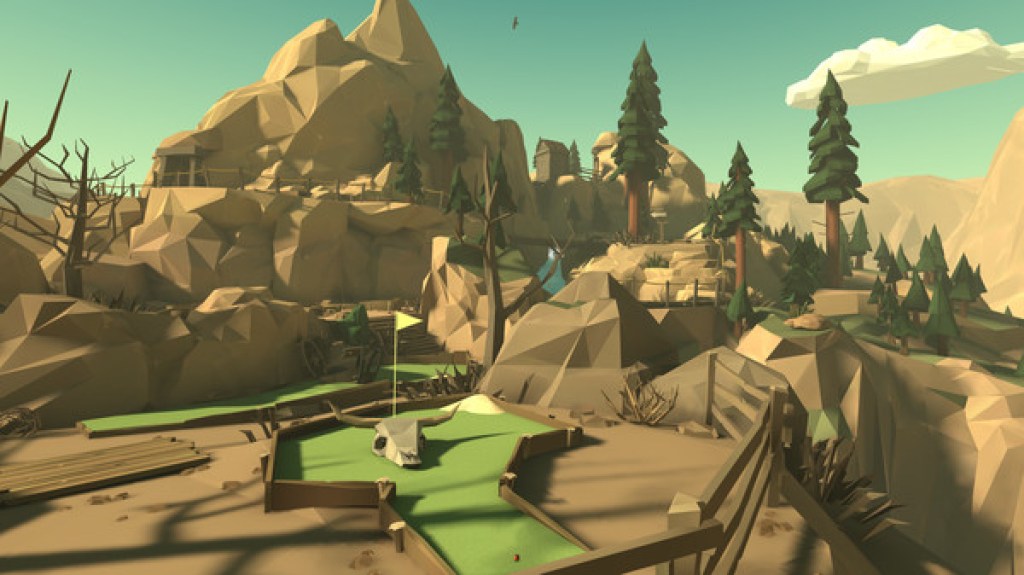 Here’s a game the whole family can enjoy! Explore 8 different 18-hole golf courses. Have fun solving treasure hunts and locating the 188 special golf balls hidden throughout the game. Play by yourself or with others! ⛳

4. Get a workout playing Eleven Table Tennis on your Oculus. 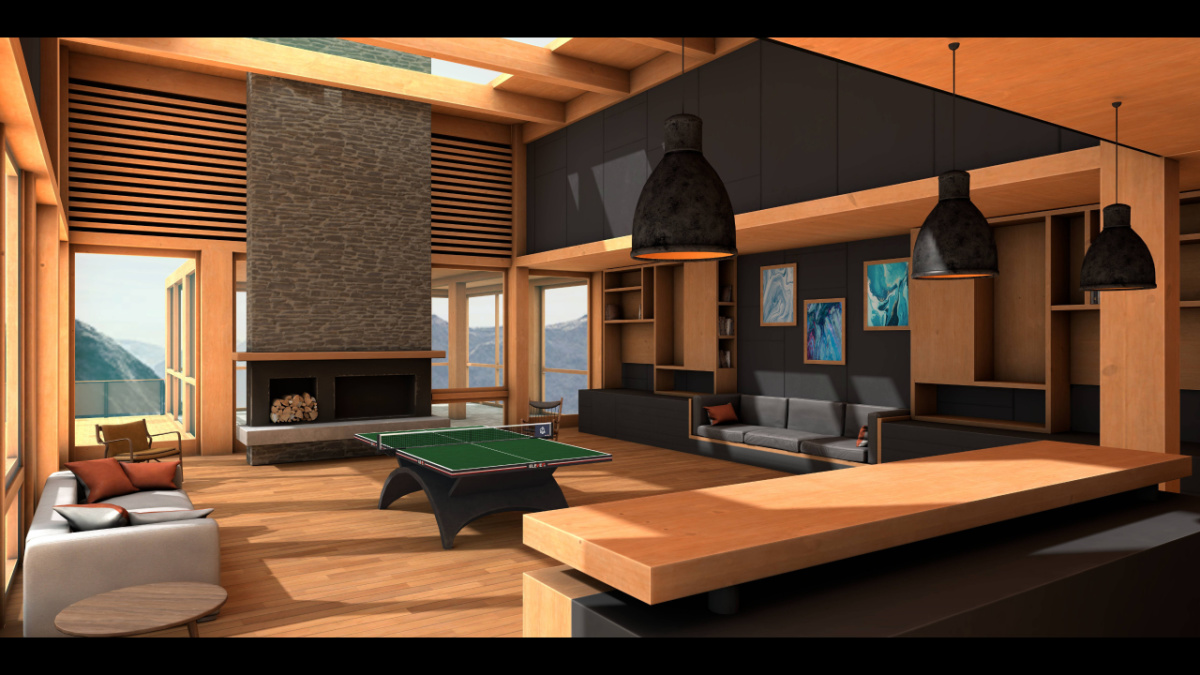 Enjoy playing ping-pong without the hassle of needing a ball and paddles. This table tennis game is extremely realistic and fun for the whole family! 🏓

5. Resident Evil 4 was released for Oculus Quest 2 and horror fans are loving it. 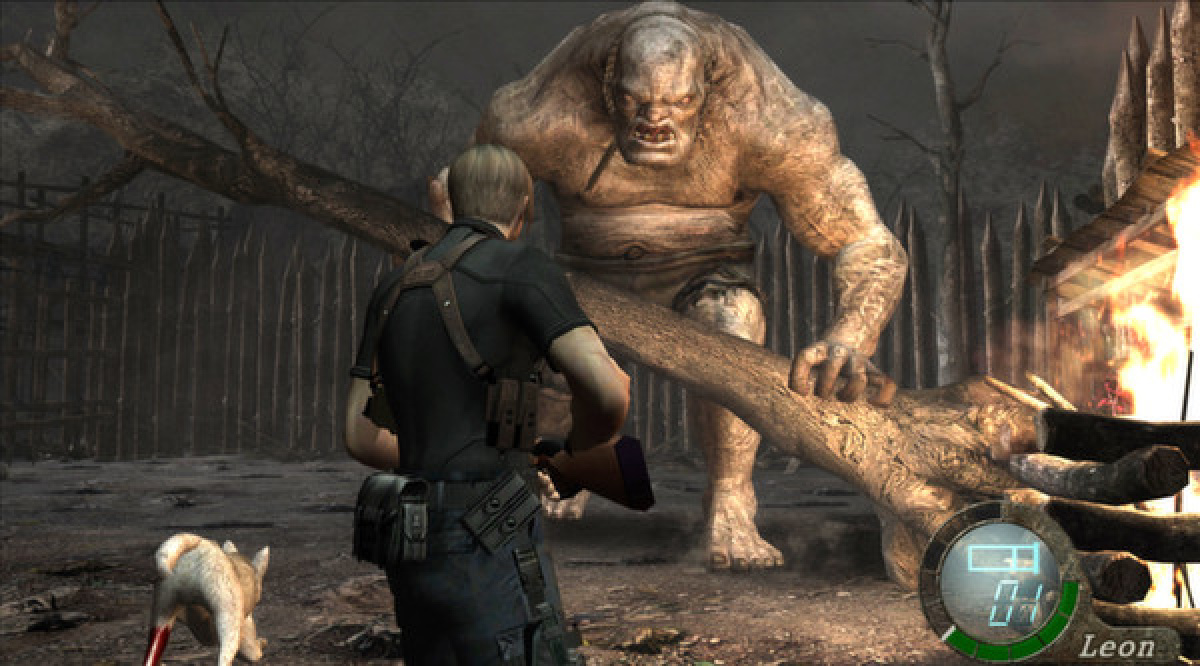 Resident Evil 4 is one of the most iconic horror franchises of the past 30 years. If you’re a fan of the book series, the movies, the TV shows, or the video games, then give this virtual reality version a try. It recently won VR Game of the Year at the 2022 SXSW Gaming Awards!

You’ll play special agent Leon S. Kennedy and your mission is to rescue the U.S. President’s daughter who was kidnapped by a creepy cult. 😱 Along the way, you’ll battle terrifying creatures and mind-controlled villagers. If you like a good scare, this game has your name on it.

“Not free, but Resident Evil 4 is incredible.” – Chris, Hip2Save reader

6. Channel your inner Mike Tyson with the boxing game The Thrill Of The Fight. 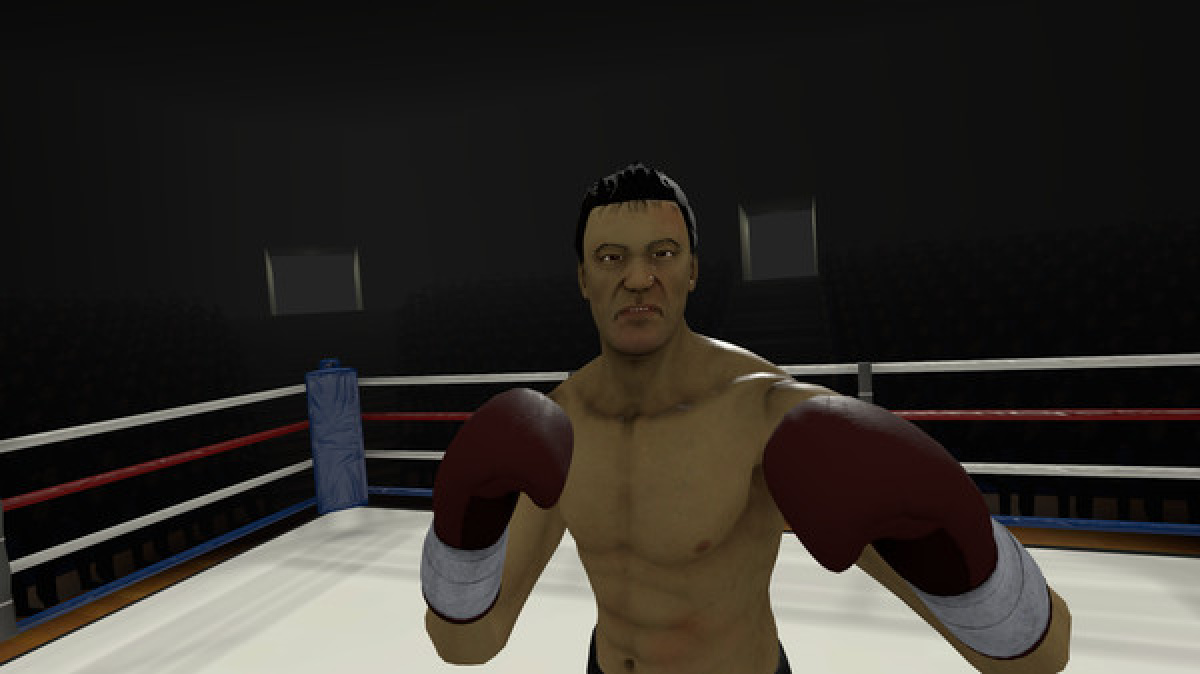 Test your boxing skills with this cool game! You’ll play several different opponents all with their own style and skillset. Can you evade their punches? Play the game to find out! 🥊

“I just bought Thrill of the fight for my son. It was $10. Not sure if it was just on sale or if that’s its normal price but my son loves it. And he’s sweating after 1 boxing match. It’s probably a good workout.” – Kelly, Hip2Save reader

7. Solve the cryptic puzzles in The Room VR: A Dark Matter. 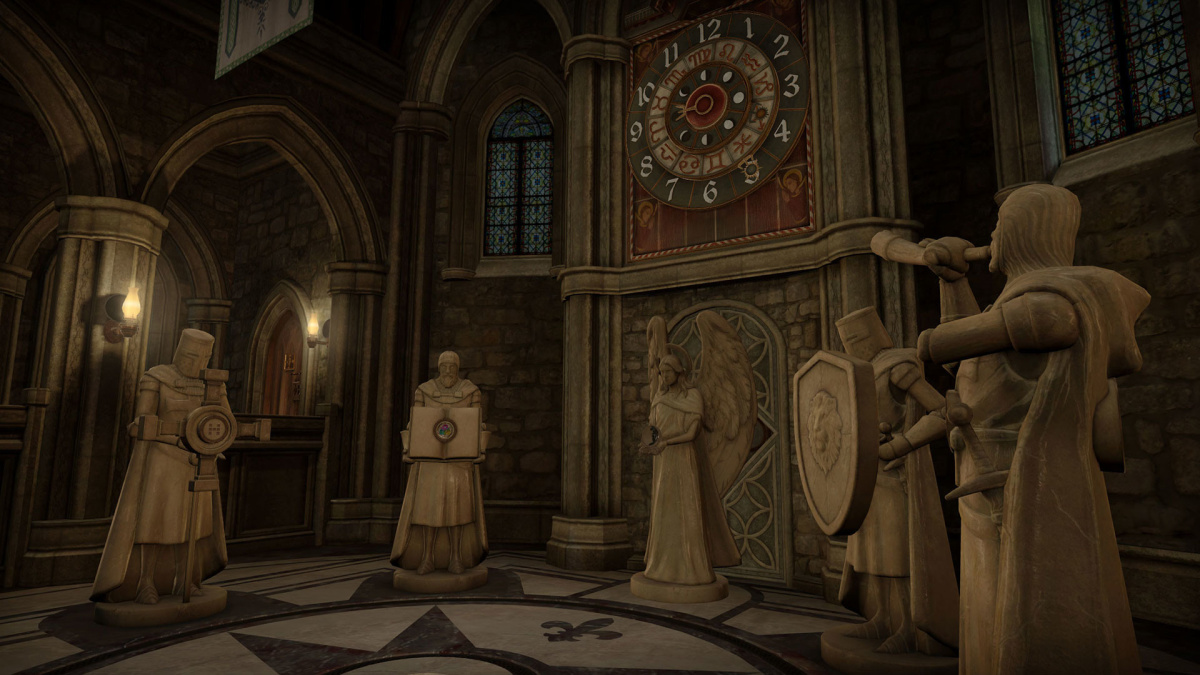 If you’re a lover of puzzles, try to solve The Room VR: A Dark Matter. The game takes place in 1908 at the British Institute of Archeology. When the Egyptologist goes missing, it’s up to you to find him. Figure out the cryptic clues as you explore mysterious locations and examine unusual artifacts. 🧩

“I loved, loved The Room! It’s an investigation mystery puzzle game and you can sit when you play. I played it when I was getting used to the VR. I was sad when I was done with it!” – Kayla, Hip2Save reader

8. The clock is ticking and you have no time to lose! Will you survive? Find out when you play I Expect You To Die. 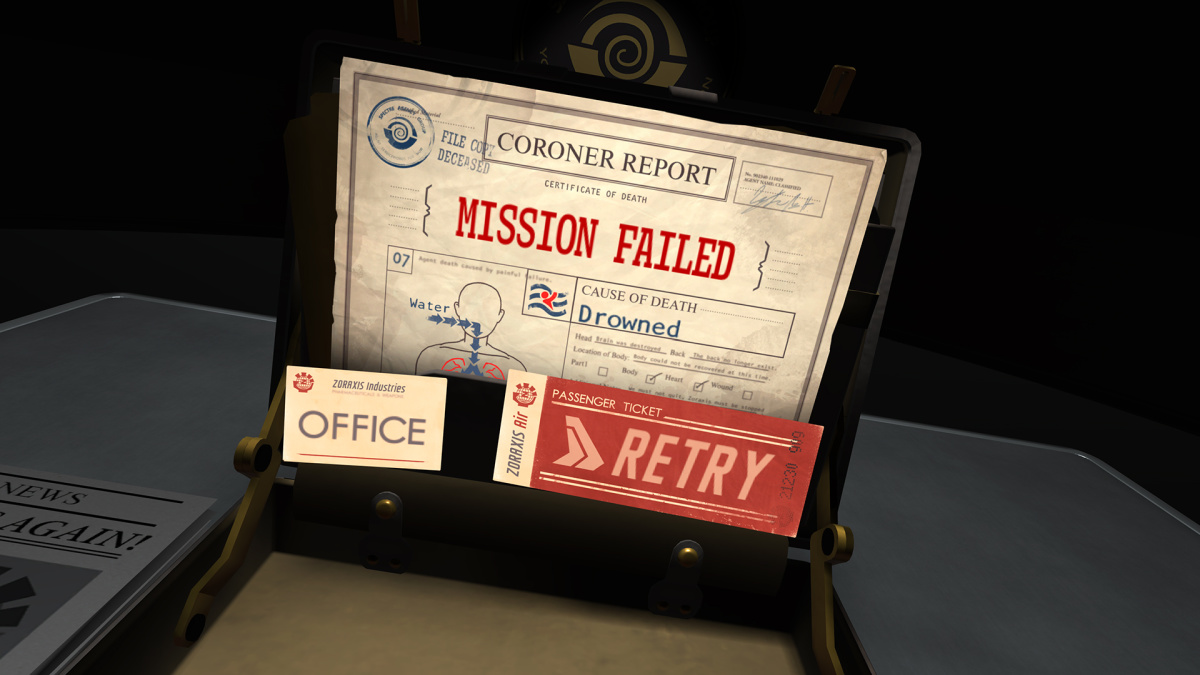 Fans of spy movies and escape rooms will enjoy I Expect You To Die. You’ll play a special agent in this thrilling VR game that forces you to solve puzzles in order to survive deadly situations. Each agent gets a special power to help them navigate the puzzles and defeat the evil Dr. Zor. Hurry, the clock is ticking! ⏲

“How would it feel to be James Bond, put into an impossible situation — such as being stuck in a sinking submarine, or tied to a car that’s rigged to blow up? You have mere minutes to solve the puzzle, and it’s a blast every time.” – Shane, Hip2Save team

9. Go on an epic adventure in this popular Oculus Quest 2 game called Moss. 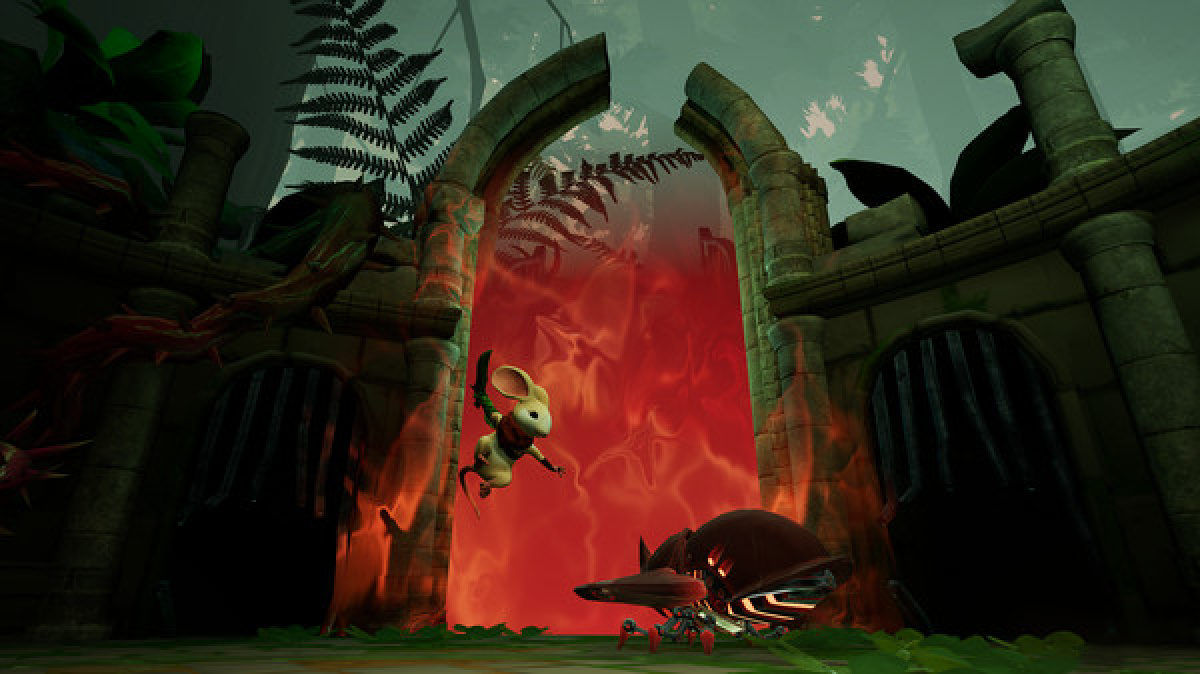 If you enjoy compelling fantasy stories, try this action-adventure puzzle game. You’ll travel with Quill, a young mouse who stumbles upon a Glass Relic and awakens an ancient magic. The two of you will travel to distant realms solving puzzles together and battling formidable opponents. This game is such a hit that the creators made a sequel!

“And the other great one that I loved was Moss. It’s a great one you can sit with too and you control a mouse through really neat towns trying to solve puzzles.” – Kayla, Hip2Save reader

“Wonderful platformer with Pixar-esque animation; you play as a medieval mouse trying to ward off evil forces from his kingdom.” – Shane, Hip2Save team 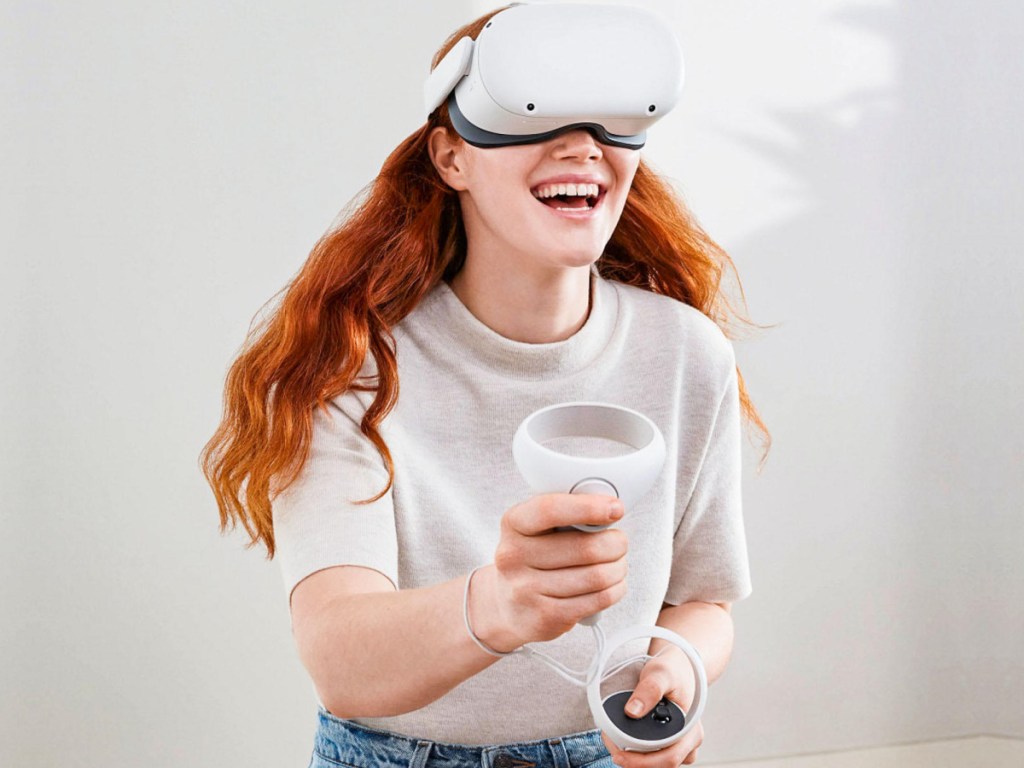 These virtual reality systems aren’t cheap, but we found a few deals going on that can help you get the most bang for your buck!