Please note that many businesses and attractions throughout New England have modified their operations in response to COVID-19. Please travel responsibly, and check with state guidelines and individual businesses before making travel plans.

Pennsylvania may claim the nation’s first-ever corn maze (c. 1993), but thanks to New England farmers’ ingenuity — and the fact that no one does autumn fun like we do — this agricultural attraction crops up all over our region as summer turns to fall. Today, puzzling your way through elaborate paths carved into a cornfield is as much a part of New England’s foliage season as apple picking and leaf peeping.

As with lobster rolls, beaches, ice cream flavors, or any of the other things that New Englanders like to argue about, different types of corn mazes have their partisans. Some people prefer devilishly difficult treks; others opt for short, fun jaunts that are easy on little legs. And still others love the extras found in farm settings: hayrides, pumpkin patches, and animal friends.

There are aspects of all of these in our list of the best corn mazes in New England, which is a great starting point for travel planning no matter where you’re bound this autumn. But remember, there’s plenty more to explore — and if you have a favorite New England corn maze you’d like to share, please let us know in the comments! 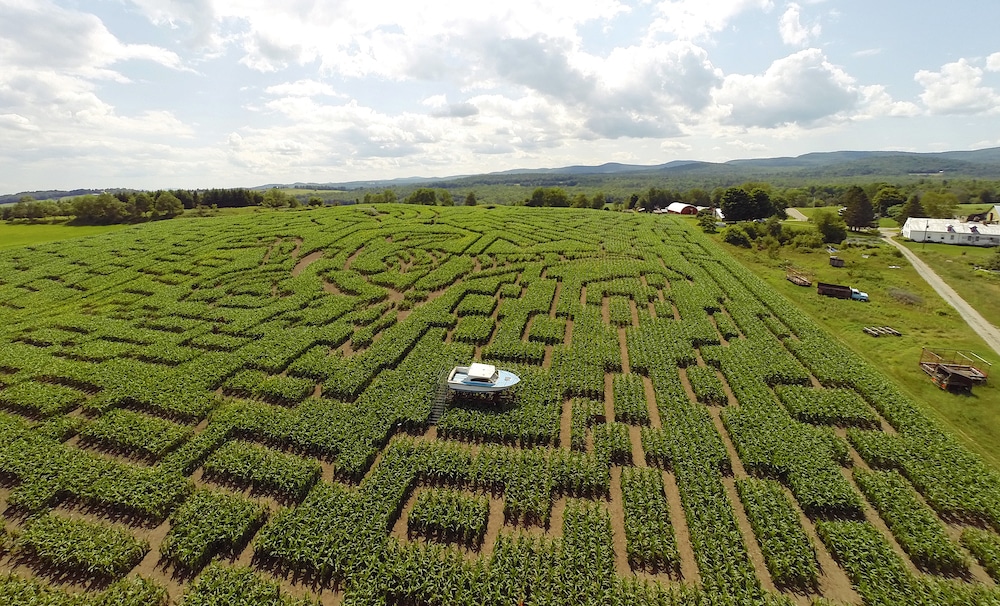 Set on a third-generation dairy farm in Danville, the biggest corn maze in New England is a 24-acre mind-bender whose setup includes an underground tunnel and a 28-foot cabin cruiser parked amid the corn. On average, completing the maze — which is redesigned every year — takes nearly three hours. (There is, however, an officially sanctioned scenic shortcut that takes less than an hour.) The farm also hosts the Pretendin’ Play Area, where enticements include a Western-style mini village, “gopher tunnels,” and friendly farm animals; kids will love the twist on mini golf known as Barnyard Golf. Come October, daring visitors can sweat out Dead North, a special haunted attraction that takes you through the fields and into various buildings as costumed characters leap out from the dark. Note for 2020: The Pretendin’ Play Area is closed this season, but Barnyard Golf is open. Admission to the maze is timed and requires 24-hour advance purchase. More updates here.

A tip from a reader turned us on to this gem in Levant, the longest continually running corn maze in Maine, which was also recently chosen by USA Today voters as one of the nation’s best. What stands out is the artistry that goes into Treworgy’s annual designs, which have included a scene from Blueberries for Sal, a steam locomotive, and Paul Bunyan. The year 2020 saw the debut of a true Maine masterpiece to mark the state’s 200th anniversary: a 4.5-acre maze that incorporates a lobster, a lighthouse, a moose, a pine tree, and the state motto, Dirigo (“I direct”). Visitors to the maze receive a map of riddles to guide them, and at the end is a sweet reward: a free soft-serve cone. A magical variation is the non-spooky Night Maze, where you can wander through the corn under the stars and collect treats at stations along the way. Other attractions here include farm critters, hayrides, and fresh-made doughnuts. Note for 2020: Hayrides have been temporarily discontinued. More updates here.

Now in its fourth generation of family ownership, Sherman Farm in Center Conway is a busy working farm that makes time every fall for some outsized fun, starting with its 12-acre corn maze. Designed for three ability levels, the maze has kid-friendly games within it (Farm Scene Treasure Hunt, Barnyard Bing-oh!) and corny riddles called Cornundrums that help guide visitors through the puzzle. Rounding out the experience are things like wagon rides, a “Moo Express” kiddie ride, a jumping pillow, a petting area, cider doughnuts, and kettle corn. Note for 2020: Wagon rides have been temporarily discontinued. Tickets should be purchased online to ensure entry. More updates here.

Get lost for a good cause at Middlefield’s venerable Lyman Orchards, which since 2000 has donated a portion of its corn maze ticket sales to the American Cancer Society. In keeping with its community spirit, for 2020 Lyman Orchards has debuted a four-acre maze with the theme “Thank You, Our Heroes,” featuring the Statue of Liberty adorned with a giant heart as a symbol of appreciation for the nation’s frontline workers. Visitors to the maze follow a passport system that poses multiple-choice questions about the theme of the design — if you answer correctly, you’ll go the right way. (Maze monitors are on hand to assist anyone who gets too into the weeds.) And if you happen to visit in the summer, look for Lyman’s other famous maze: two miles of paths within 350,000 blooming red and yellow sunflowers! Note for 2020: Entrance to the corn maze will be by staggered admission, which can lead to wait times. Visitors are encouraged to come during the weekday or at off-peak times on weekends. More updates here.

Just half an hour from Rhode Island’s capital city is this nearly 100-acre Portsmouth farm run by the Escobar family, who round out their acclaimed dairy operation with a farm-stay inn, Christmas trees, a pumpkin patch, and — oh yes — a huge corn maze. Now headed into its third decade of annual artistry, the eight-acre labyrinth has featured a number of locally inspired designs, including the Providence Bruins logo, but in 2020 it went back to its roots with an epic tribute to farming (the maze pathways actually trace the words “On the 8th day, God made a farmer”). Families can also enjoy concessions, hayrides, a hay play area, and a “cow train.” Note: Book online and get a $1 discount. Tickets bought on-site are cash-only.

The Bay State is blessed with a number of outstanding corn mazes, including the festival-atmosphere Davis Mega Maze in Sterling (think: barbecue, craft beer, live music, zip lines) and the awesomely artistic Mike’s Maze in Sunderland, which Wired once called America’s most elaborate corn maze. Yet we keep going back to this family-friendly-but-still-challenging labyrinth in Ipswich — and apparently it’s a hit with Adam Sandler, too, who visited with his film crew in 2019 for the movie Hubie Halloween. There are 10 miles of paths in the eight-acre main maze, which calls on visitors to test their brains with a game sheet that corresponds to 18 stations along the way. There’s also a mini maze that you can complete in about 20 minutes. There are terrific play areas for kids, including a 70-foot jumping pillow, and barnyard animals to visit. Plus, each year Marini Farm sets aside a few days for four-legged friends to join in the maze craze, as a fund-raiser for the Ipswich Humane Group. (Doggy Daze dates for 2020 are September 12 and 13.)

Did we miss your favorite New England corn maze? Let us know in the comments below!