Books and TV have an odd relationship. There’s a misconception that you cannot enjoy both, but that is big wrong.  Television is dependent on literature, much like music, movies, and visual art. Books provide so much of the original content that inspires and is adapted into television. Aside from adaptation, television episodes often feature books, writers, and literary references as a nod to the readers.

There are some television shows that are inherently bookish, like Gilmore Girls, that have a reading list longer that the standard English 101 class. The more subtle references, the ones that prod you in the ribs while you’re trying to enjoy your popcorn, those are my favorite. If you catch the literary references, you feel like a genius, if not, eh, no biggie.

Beyond adaptation and referential, there are also books and bookishness being used as a prop. What does that mean? This can be literal — like characters carrying books, a book being used to hide behind, etc. Or a character can suddenly become a bookworm/writer. For instance, in Golden Girls season 5, episodes 2–3,  Blanche decides to become a romance novelist. She stays awake for 72 hours straight working on her novel and is heartbroken when it gets rejected. This writing frenzy only lasts through the two episodes.

With the variety of ways that books influence the writers’ room on our favorite TV shows, it’s no wonder that some of the most beloved episodes have a bookish touch. Next time you’re watching reruns, try and catch the title of the books in the background- you might be surprised to find the titles fit the theme of the episode!

Now, let’s dive into some of the best book focused television episodes! 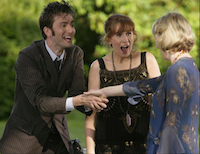 “The Unicorn and the Wasp,” Doctor Who

Since 2005, Doctor Who has showcased literature through references, lifted plot lines, and cameos of beloved authors and characters. In this series 4 episode, The Doctor and Donna arrive at a 1920s garden party hoping for a bit of a respite from all that running around. And who just so happens to be one of the guests? Agatha Christie, the Agatha Christie. Check the calendar and oh, look, it’s the day Mrs. Christie is supposed to inexplicably disappear for ten days. When another guest is found murdered, a proper investigation must follow. As The Doctor, Donna, and Agatha Christie work together to uncover the clues, they discover the killer to be a Christie, err, fan. Throw in some physical comedy, a dash of 1920s slang, and a few aliens, and you’ve got yourself a sci-fi whodunnit. If you haven’t seen this episode, it’s a real treat. 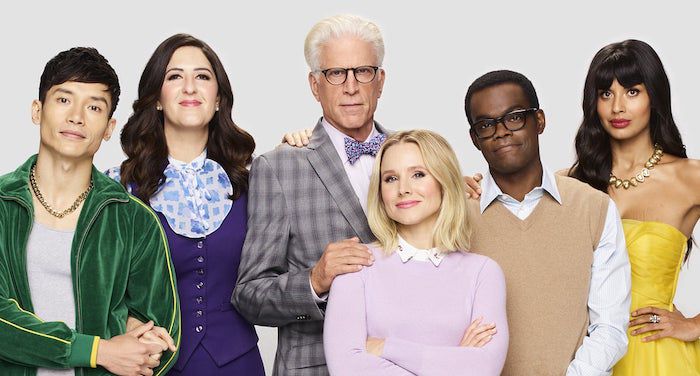 “The Trolley Problem,” The Good Place

During its four season run, The Good Place featured plenty of literary nods — from poetry to a ripped page from What We Owe to Each Other being stuffed into Janet’s not-mouth. In this season 2 episode, Chidi is frustrated with Michael for not making any progress in their continued ethics lessons. As a Bad Place architect, Michael cannot help but interpret all human actions into points that would send them to the Bad Place. Chidi assigns Michael an essay on Victor Hugo’s Les Misérables, examining  the ethics of the 19th century doorstopper. Michael uses his essay to state his opinion on the French. According to Michael, there is no one worth redemption in Les Misérables, not even Gavroche.

Chidi decides to carry on with a philosophical riddle. He presents The Trolley Problem to the class. The real problem, according to Michael, is not which road workers to save, but how to kill all six. Michael creates a simulation Trolley Problem for Chidi and Eleanor. After multiple rounds of Trolley Problem simulation, including running down five William Shakespeares, it’s determined that there is no “right” answer.

In Les Misérables, Jean Valjean spends his life becoming a better man — caring for the poor and sick, adopting an orphan — yet that doesn’t change his past. Javert spends his life seeking justice in the law, but finds that mercy is at odds with justice. For Michael, learning to be “good” also has to mean what’s truly evil versus merely 20 points worth of “bad.” What books would you assign to Michael? 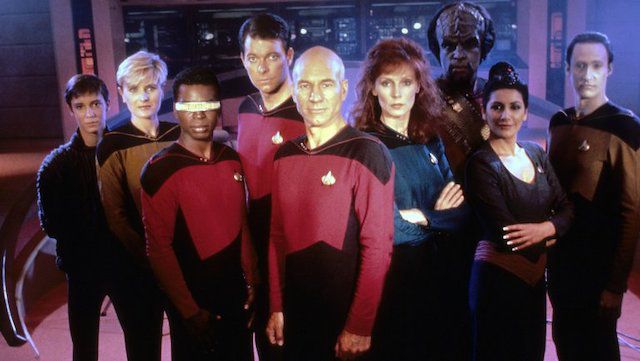 This episode from season 2, episode 3, is an absolute classic. While waiting for a rendezvous with USS Victory, LaForge and Data create a Sherlock Holmes–themed game on the Holodeck. Data being Data, has memorized all of the Sherlock Holmes stories and possible outcomes and solves the mystery in minutes. Dr. Pulaski asserts that the only way for the game to be playable for Data is if he does not already know the outcome. A new game is drafted, with an adversary that Data cannot anticipate.

In the game, Professor Moriarty has kidnapped Pulaski and is fully aware of the Holodeck simulation. Moriarty is even able to draw the Enterprise. Data and LaForge leave the game to alert the Captain. It’s then that they realize they requested the program create an adversary for Data not Sherlock Holmes. Moriarty’s abilities go dangerously beyond the game.  After bargaining with Captain Piccard, Moriarty is promised that he will be preserved as Holodeck material.  This episode combines the best of Doyle’s beloved stories with classic sci-fi tech and humor. “Elementary, Dear Data” was nominated for two 1989 Emmy Awards. 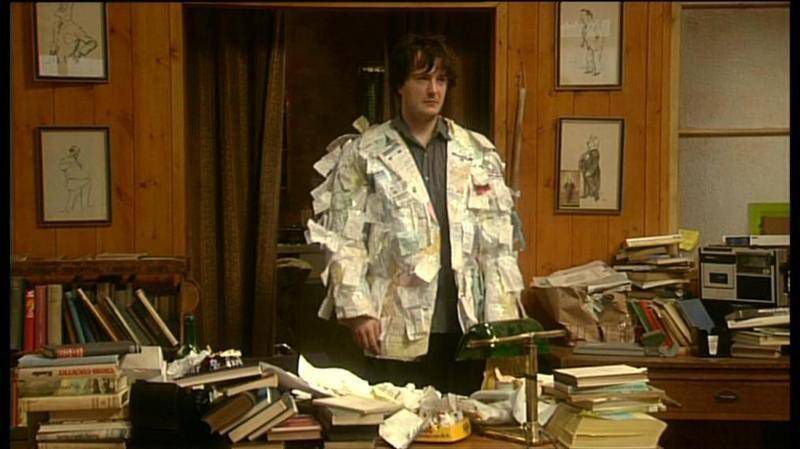 Black Books takes place almost entirely inside the overstuffed London bookstore run by misanthrope Bernard Black and anxious people pleaser Manny Bianco.  During this first episode of the series, Manny, still working as an accountant, is desperate to find a copy of The Little Book of Calm. Bernard discovers that his own accountant has fled the country, leaving Bernard to do his own taxes. At lunch, Manny accidentally swallows The Little Book of Calm with his soup. The next day, Manny is amazingly calm, offering up sage wisdom such as “Add a dab of lavender to your bath and soon, you will soak yourself calm.”

Meanwhile, Bernard is begging customers to break his legs so he can put off his taxes for a while longer. He purposefully gets into a fight in the street and is woken by Manny who agrees to do his accounts for him. Thus begins a beautiful partnership full of insults and halfhearted attempts at murder. 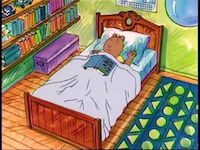 One of the most iconic scenes in Arthur is Brain belting out “Jekyll and Hyde.”  The episode, “Arthur’s Almost Live Not Real Music Festival” originally aired in 1998 and featured another literary bop, “Library Card.” Arthur and Buster show D.W. their music videos they’ve made with friends.  During Brain’s music video, he reads The Strange Case of Dr. Jekyll and Mr. Hyde before bed and  has nightmares. Nightmare Brain creates a potion to divide Brain into an evil and good version of himself. Evil Brain is greedy and begins to seep into Brain’s waking life. When it’s time to return the novel, Evil Brain decides to renew.

Lost is chockfull of literary references;  one of the most prominent and frequent references is that of Lewis Carrol’s Alice’s Adventures in Wonderland.  “White Rabbit” is Season 1, episode 5, while we’re still getting to know the Island. This episode focuses on Jack Shepherd’s childhood and relationship with his father. Prior to the plane crash, Jack has been sent by his mother to retrieve his father in Australia, only to discover that Christian Shepherd has died.

On the island, Jack is haunted by the figure of a man in a suit who disappears and reappears. Up close, the man wears the face of Christian, and disappears with the sound of the Island monster.  Locke advises Jack to keep looking for the man in the suit, calling him Jack’s “White Rabbit.” That night, Jack follows the man in the suit again, finding debris from the plane crash, including Christian’s empty coffin.   With this episode, you can see the shift as Jack finally accepts the Island’s topsy-turvy rules. Jack’s first flashforward episode is called “Through the Looking Glass.” 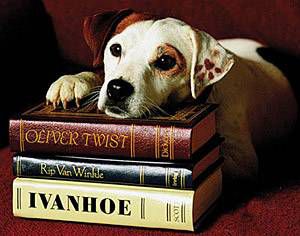 This literary show features Wishbone, an imaginative Jack Russell terrier, and his human, Joe, and their adventures. In the 1997 Halloween special, Oakdale is getting ready for a huge scavenger hunt. Joe is anxious about his history of bad Halloween luck. Joe joins his friends on the scavenger hunt, but insists that his bad luck will hurt their team. Joe and Wishbone both face their fears, with games of chance and the vet clinic respectively. When the scavenger hunt takes Joe, Sam, and David to the Old Murphy Place, Joe opens up about his anxieties about Halloween. Inside the house, the black cat, slamming doors, tricks and traps, and a bully torment the team until they solve the puzzle.

In the fantasy sequence, Wishbone stars as schoolteacher Ichabod Crane, in The Legend of Sleepy Hollow. Sleepy Hollow is a town that loves ghosts stories and superstitions, especially that of a revolutionary soldier, the Headless Horseman.  While reading ghost stories, Crane meets the enchanting Katrina Van Tassle. Crane soon becomes one of Katrina’s many suitors, using his knowledge of superstitions to win her heart. After sharing ghost stories at the Van Tassle’s Halloween party, Crane is confronted by the Headless Horseman, and vanishes. This episode was scary AF to 1997 me. 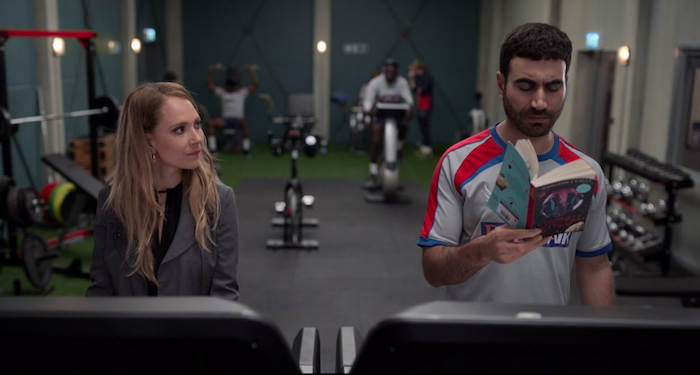 Ted Lasso has quickly become known for its clever literary references making it the unlikely television combo of bookish and sporty. In season 1, episode 3, Ted gifts his players each a book. To Roy, Ted gives A Wrinkle in Time, who immediately snubs his nose at the children’s sci-fi classic. Ted sees the leadership potential in Roy, glimmering in the background, ready to be discovered. So, like Mrs. Whatsit gives to Meg, Ted gives Roy his faults. For Roy, his fault is his anger. Learning to harness that anger will make him a stronger player. Later, as Roy reads A Wrinkle in Time with his niece, he has a lightning bolt moment, that yes, he is supposed to be the “little girl” (Meg).

I couldn’t mention every book centered episode ever, or we could be here so long we would miss the next one. Up next on my Netflix playlist is Romance is a Bonus Book and the second season of Bridgerton. Until then, check out our TV archives or pair up your favorites for an epic marathon. Just remember to get some snacks first!