As British author, illustrator, and education ambassador Andrew Hammond knows well, there is often a trade-off when working freelance in the creative sector. While it can provide far more freedom and personal satisfaction than the typical 9-5, it comes with a certain degree of uncertainty about where things will lead.

As Doug Shields finds, however, it’s not so much the outcome but the creative act itself that drives Andrew. Having ‘worked his passage’ within the industry, and having built up a dedicated fan-base for his creations, big things could be just around the corner. Even so, Andrew’s focus remains on what matters most to him—enjoying, and learning from, the process.

There’s a good chance that you will have seen Andrew Hammond’s work—which includes TV, the gaming industry, and publishing sector—at some time, especially if you are a parent.

You may already be a fan of his own Spacekid iLK series, launched in 2018 and which has quickly accrued a dedicated fan base of children with its wholesome blend of humorous yet instructional sci-fi and fantasy adventures.

Like many creative powerhouses, however, the unassuming author and illustrator, whose credits include CBBC, Pokémon, NBC Universal and the Marvel franchises, among many others, has remained largely in the shadows, preferring to let his artwork to do the talking.

That, however, looks set to change. With a family-friendly brand of humour that appeals to all ages, the Spacekid iLK series of graphic novels have received interest from production companies including DreamWorks, Lucasfilm, and Disney.

When we meet for a socially-distanced coffee in London’s Soho, however, it quickly becomes clear that Hammond is driven not by money and notability but by learning and perfecting his art. What excites him most are opportunities to communicate those ideas that have guided his life with young audiences, and to have the chance to work with other brilliant creatives.

“I believe that there is the potential for Spacekid iLK to translate to the big screen because of the narrative arc of the main character and the relevance to children of the central metaphor, about alienation, and its relationship to acts of choice.”, he tells me.

“However, when it comes to these latest opportunities, what will be will be. They’ve been a lot of fun and have taught me a lot. Whether something comes from them or not is yet to be seen. Either way I will continue finding ways to tell the stories I want to tell. It’s exciting to get chances like this and I’ll enjoy them and learn whatever I can from them, but I don’t get fixed to the idea of the prize at the end.”

Hammond’s fascination with, and deep-rooted love of, art began at an early age when he’d draw his favourite video game characters or create his own comic strips.

In his teens he moved into oil painting and, by the age of 18, was selling commissioned portraits to help fund a foundation course in art and design. This money-earner continued throughout university and would catch the attention of a TV director—a pivotal moment in Hammond’s career and one that would alter the course of his professional life forever.

“I took a year out of university, where I was studying film production and screenwriting, to be a runner for TV production companies. Upon graduating, one of the directors invited me to work for his company producing storyboards. He had known about my oil paintings and deemed me a good ‘fit’.”

The opportunity was too good to miss, and within months of leaving university Hammond was able to combine his passion for art with the other thing he needed most at the time—an income.

Further freelance jobs followed for major brands including Coca-Cola and Google. In 2009, he also worked on the CBBC TV show ‘Big Babies’, preparing storyboards for each. “My role was to prepare the first visualisation of the scripts—showing where the funny moments would be, Illustrating character reactions, and making choices about composition. It was a wonderful position and helped me learn in so many directions, early on, what works visually, why it works, and how to translate your ideas into a final piece.”

It is perhaps no surprise that Hammond began experimenting with other art forms. Among them was stand-up comedy. He had been writing comedic graphic novels for some time and was by now an in-demand freelancer. In true Hammond style, he wanted to put his writing—and himself—to the test.

“I wanted to test my writing so I wrote a new routine for each gig, most of which went OK,” he explains. “One, a 10-minute Valentine’s Day gig, went spectacularly badly. There was a couple in the audience who had broken up the week before, and the heckles—from them and from others in the audience— came in thick and fast. Every comedian struggled that night except the headliners, who handled the negative crowd like pros.”

Whilst his foray into stand-up was relatively short-lived, it spurred him on to bigger, arguably more challenging things. In 2011, he met two Russian billionaires at a café not far from where we’re sitting. As a side job—“It was something to do on the weekends”—he co-created a money-saving app and the Russians, who owned and had funded a string of technology ventures, wanted in.

“They were like characters in Game of Thrones—big, serious men with big, serious, ambitions,” he said. “There was an investment of £750,000 on the table, however my co-partner and I were unprepared. They wanted and expected a business plan—which we didn’t have—and so we spent the following weekend creating one. Needless to say, it was a steep learning curve.”

The investment never materialised and Hammond left the project, though he credits the experience as one of the most valuable of his career to date; teaching him about the “power of an idea”, and the importance of brand development and strategy.

By 2015, Hammond’s new company, Andrew Hammond Art Limited, was up and running and bigger things were in the making. Like many freelancers, however, his income came in fits and starts: “It was feast or famine for at least a decade,” he recalls. “This experience taught me that there are in fact two types of security: Financial security, which is obviously very important and is something that we all strive for; and the security that is born out of making your own choices, establishing an identity, finding a purpose, building a community of people you trust, learning to have faith in your decisions, finding what makes you happy and having the confidence to pursue it. When the former felt unstable, I leant on the latter to keep my focus.”

The money he saved during the feast was put to good use during times of famine, typically always on what Hammond calls his “personal projects”. He produced short films and music videos, his own clothing line based on his artwork, and released an online comic where readers could vote for what happened next. The website was called ‘Mythed’ and reflected his love of science fiction, fantasy, and mythology.

“I’d devoured Greek myths and Jesus’ parables as a kid,” he says, “and I loved the idea of having stories with a message, teaching the rites of passage from the children’s to adults’ world. You could say they were a guide for life. I added in humour to make these messages more relatable so that they could appeal to a wider audience.”

His first comic was called ‘Invasion’ and told the story of an alien overlord who invaded Earth and had to deal with the stresses that came with it.  It was a short-run comic, published weekly online, and would later inspire his book series, Spacekid Ilk [LINK TO https://www.spacekidilk.com].

In 2014, Hammond began work on a new comic book called ‘Kong Jnr’. The following year he was involved with computer game ‘Assassin’s Creed Chronicles’, providing art to create the game’s in-game story scenes. This was one of those classic cases of serendipity, with the company he was working with looking to expand into the book trailers market. To ‘test the water’ they offered to turn Hammond’s Kong Jnr illustrations into an animated trailer—an opportunity he “jumped at”.

The trailer was spotted by his literary agent, Paul Moreton, who suggested that Hammond turned his attention to book writing for children. This suggestion gave him a new focus and led to the creation of the Spacekid iLKseries—humorous science-fiction graphic novels for children, inspired by his earlier short comic strip, ‘Invasion’.

The first book in the series, Spacekid iLK: Invasion 101, was published in 2018, shortly after he had worked on a project for NBC Universal, one of the world’s largest media and entertainment companies.

Aimed at children aged between seven and 13, the book won the hearts of readers, parents, and reviewers alike. According to Hammond, his books teach young readers about the importance of finding courage to make their own choices, and about the inner strength that comes from connecting authentically with others. As the books tell the story in visual form, with illustrations on every page, they are ideal for reluctant readers and for children with dyslexia.

The book’s publication led to Hammond teaching workshops in schools and becoming an ambassador for educational change.

“Creative subjects are the one opportunity at school in which children have to face the terrifying prospect of making their own choices to build a thing that other people care about. There is no set ‘right answer’, which is a frightening prospect when our worth becomes predicated on knowing right answers rather than on our courage”, Hammond tells me. “As a result, creative subjects are seen as a waste of time, but this is where we can really confront the question, ‘How do I create value for others?’ and learn the necessary skills, like empathy and communication, to do so. As a result, we avoid exercising those skills on which a deeper sense of worth is founded.” 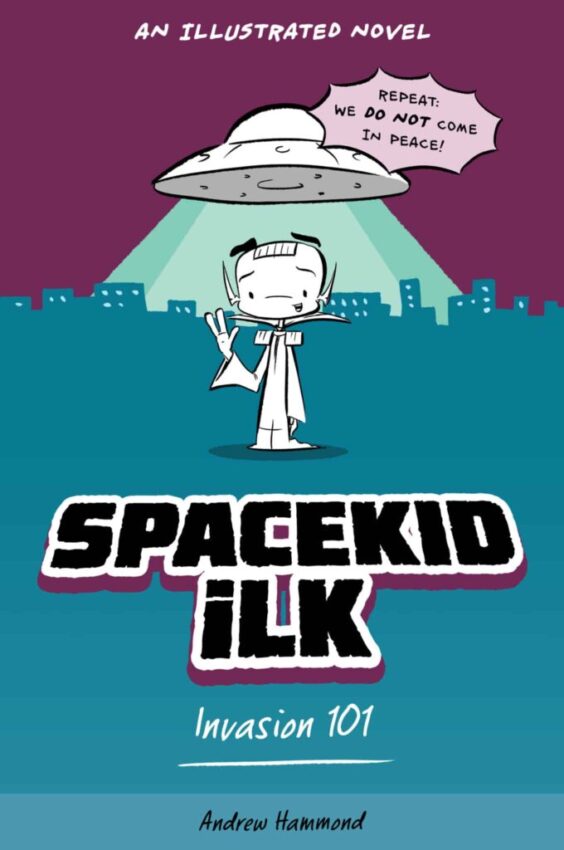 At around the same time as the first book’s publication, Hammond was working with London-based Maverick Media on the computer game, Marvel Puzzle Quest. [Hammond is now their UK-based Creative Director, his first ever permanent job, and directs commercials for Pokémon and other games developers]. Being freelance, he was able to work remotely and was, therefore, able to fly to LA where he met production executives at DreamWorks, Lucasfilm, Disney, Skydance Animation, Apple and Imagine Entertainment amongst others to discuss adapting Spacekid iLK for the big screen. Talks were at a pivotal stage when Covid struck and the world—including Hollywood—went into isolation. Hammond returned to the UK in early 2020 with a deeper confidence in the potential for his projects.

Since then, Hammond has been hard at work on his second graphic novel, Spacekid iLK: Stranded!, and while this has been his primary focus outside of the ‘day job’, he remains optimistic about his creation’s suitability for either film or TV adaptation.

Hammond concluded: “An animated film would be amazing and I’m sure that Spacekid iLK would work well for film, but TV or streaming are also viable paths. If there’s one thing that the rise of Netflix, Amazon Prime, and other streaming services have shown, it’s that there are now lots of opportunities to create original animated series with a narrative arc and ensemble cast.

“I’m open to all routes, and equally as comfortable continuing as I have been doing, in the more traditional publishing space. As long as I am enjoying the process, learning more each day and mixing with fellow creatives, be they established or kids just starting down the road, then I’m more than happy.”