An Early Grave by Robert McCracken

I am always up for a good murder-mystery and was delighted to listen to An Early Grave, the first audio in the DI Tara Grogan Mystery series. A murder in a Liverpool housing estate introduced DI Grogan to Callum, a doctor and recluse. He is a witness and he’ll offer up information, but only if she agrees to investigate a series of accidental deaths. Suspense, interesting characters and twists will keep you listening…. 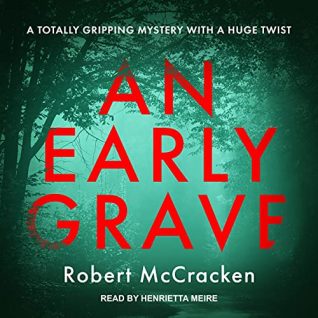 During the investigation into the death of a woman on a Liverpool housing estate, DI Tara Grogan encounters Callum, a local recluse who claims to have information.

But he won’t help her unless she, in turn, helps him find out the truth about the suspicious death of his wife and child.

Tara is ready to dismiss his outlandish theories and ravings, until she discovers that, like her, he was a student at Latimer College, Oxford. A place which she has very much buried in the past.

Desperate to move forward in her case and curiosity piqued, Tara accepts, but as she delves deeper into the man’s past, it becomes obvious he hasn’t been honest with her.

And when another death is linked to Callum, Tara is confronted by the danger that her own demons have led her to trust the wrong person again.

An Early Grave proved to be an engaging tale. A female detective who trusts her gut and a recluse eyewitness with an interesting story that the police have dismissed as the rantings of a mourning man.

We learn Callum’s story first, before meeting DI Tara Grogan as she begins an investigation of the murder of a woman found in an unoccupied home. It is there she meets Callum and his dog as they walk down the street to their home across the way. Callum looks like a homeless man and smells like one, too. His living room is piled high with newspaper clippings, police reports, and endless notes. He’s seen something regarding her murder investigation, but he wants her help with something. We, as the listener, know what happened to him, but soon discover the story is much more complicated.

The author slowly laid the pieces of the puzzle before us, weaving in murders and pulling Tara further into Callum’s theories. As she investigates both cases, she deals with headquarters, her own self doubts and current events.

I liked Tara and felt the characters were well developed. I wouldn’t call the procedural aspects of the story authentic. (think prime time crime shows), I was wrapped up in Tara’s investigations and theories, and will overlook those aspects. I was more intrigued by Callum’s story. He was a bit of an unreliable narrator, which made things interesting.

The last quarter of the audio delivered a non-stop listen with twists, danger, and reveals. It was gripping and held me captive. This would work well on the big screen with its pacing, build up and twists.

Henrietta Meire narrates. She brought the characters to life with accents and unique tones. Her performance allowed me to slip into the story and become wrapped up in events. Her pacing and pitch intensified the suspenseful moments and validated the emotions of the characters.

Sorry if my review felt vague, but this is the type of story best left to unfold on its own.I fear spoiling it for you. I look forward to the next DI Tara Grogan mystery.

Robert McCracken was born in Belfast. He spent some of his childhood in Australia. Back in Northern Ireland, he attended Dundonald Boys High School. Studied Chemistry at the University of Ulster, gained a PhD in agricultural food science from Queen's University, Belfast. Worked for thirty-four years at Department of Agriculture, latterly, Agri-Food & Biosciences Institute.
He published his first novel, An Early Grave, in 2015. He is married and live in County Down.

Henrietta Meire is a full-time voice-over artist and actress. Her studio is her second home where she loves to engross herself in books of all genres and make characters come to life—from the girl next door to the troll-witch next door to a talking battery that lives with the girl next door! In addition to narrating a plethora of audiobooks, Henrietta has voiced numerous commercial and charity campaigns, as well as video game and animation characters. As an actress, Henrietta has performed in plays across the West End and Los Angeles and can be seen in a number of popular current movies as well as HBO and CBS shows.

Never miss a post by adding Caffeinated to your Inbox

Reading this book contributed to these challenges: