All in All, A Pretty Good Week

The house is, once again, mostly silent during the day. Generally the television stays black until the evening, however, during the Olympics I would turn it on when I got up and it stayed on unless we were gone. I watched or listened to countless competitions, ranging from volleyball to equestrian events. There certainly was a lot of young skin on display, along with amazing athletic feats, wasn't there? Was mine ever that flawless? I think not. 😀

One exciting development was the appearance of an owl behind our place. It's probably been at least six months since last I was treated to the thrill of seeing a Barred Owl up close and personal. Bruce was waiting for me down at the pool and called for some supplies. Meanwhile I was watching the Canadian and Swedish women during their penalty kicks. I told him I had to check something out back with my camera in tow and after seeing the Canadians miss two kicks in a row, I ventured out into the heat. Woo hoo! 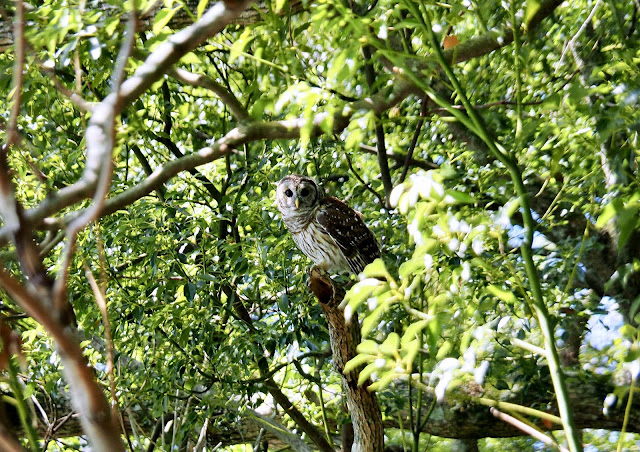 Unlike most of the owls I've encountered, this one was leery of me and flew off in a jiffy. 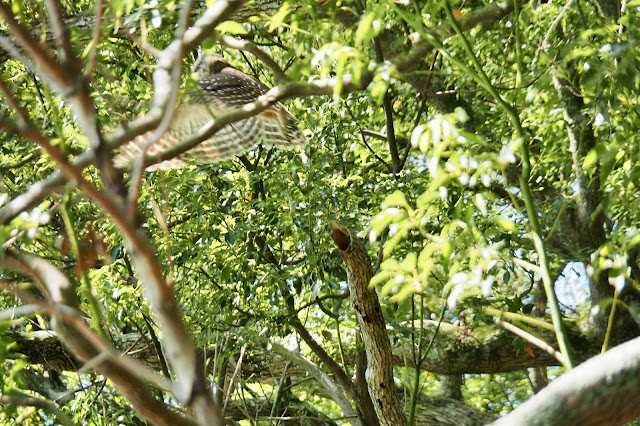 Returning to my living room, I was just in time to see the Canadians celebrating their victory! And that, my friends, is why I love watching sports. You just never know.

One morning I went to the garden center at WalMart where I oftentimes find good deals on house plants. Not this time though. Going inside to find a few things, I am still surprised when I find empty shelves. The one on the other side of the aisle had even less merchandise. 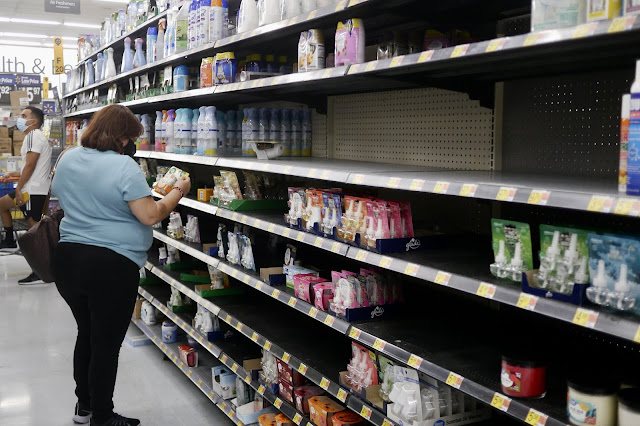 In other shopping news, I went to Milennia Mall still searching for just the right bathing suit. I began in Bloomingdales and while their display was far superior to the one I saw at the Macy's at Florida Mall, still no luck for this picky gal. 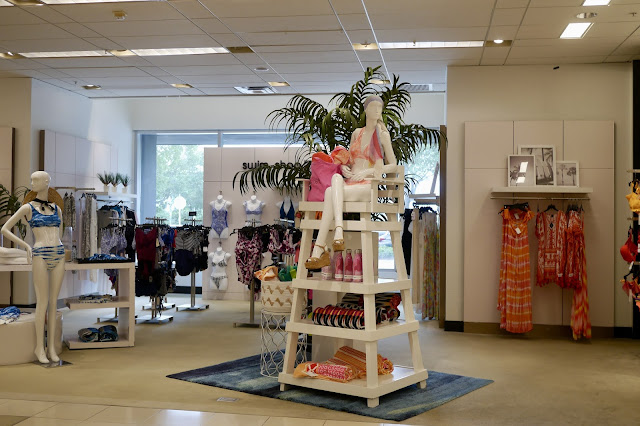 One silver lining to this whole ordeal is that when I first broke my wrist in late March I'd begun a topical treatment for a basal cell area on my upper left chest. The cream literally eats away at your skin and looks and feels pretty bad. I was about two weeks into the six week course of treatment when I fell. Deciding that one horrible thing at a time was enough for me, I discontinued applying the medicine. So far so good, as it turns out, but the skin is very pink, so a high necked suit has been what I've been looking for. Fortunately the suit I ordered from Amazon fits just fine and does what I need.

Still I like shopping in person when I can. A trip to the mall is full of photographic opportunities. Who knew so many people are wealthy enough to line up outside a Louis Vuitton store? 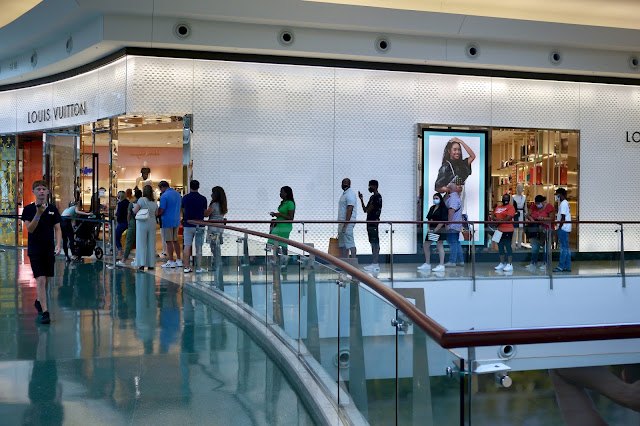 Then too, who would have ever guessed that Christian Louboutin would feature tennis shoes in their beautiful window display? 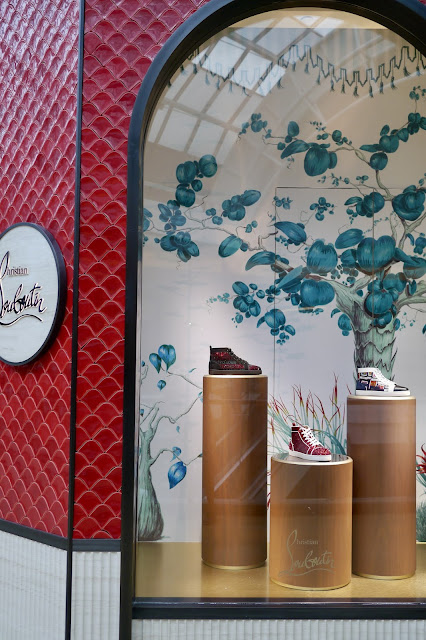 I know it will please you to know that I pushed that silly fear of riding an escalator aside using this one to get to the first floor. 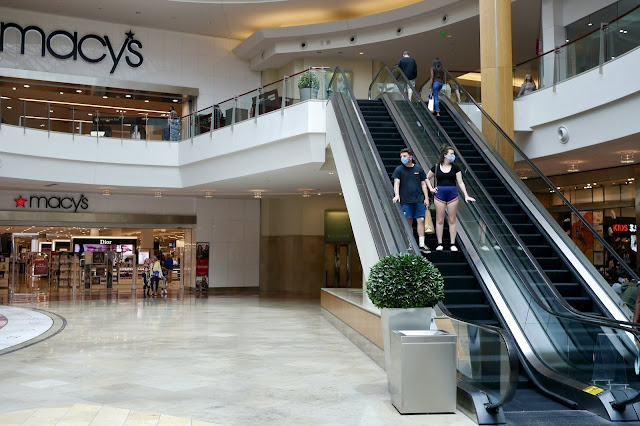 I must say, the Olympics are not the only place where lots of flesh is on prominent display. I, too, wore my mask the whole time except for when I ate a late lunch at Earls. 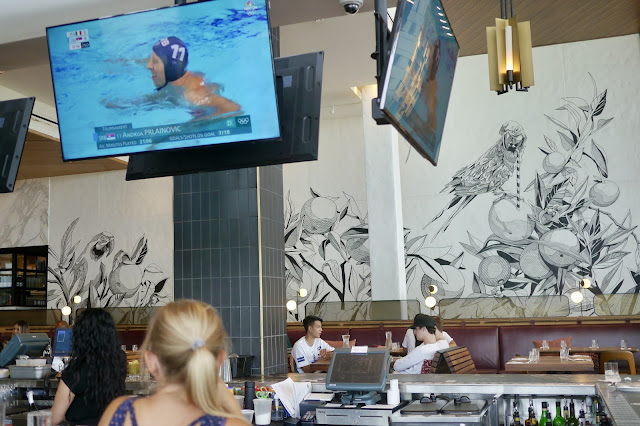 I vividly recall watching Andrew Spear do that amazing mural with a Sharpie.

Roaming through all sorts of stores, in Anthroplogie I saw this Cat Astrology book which reminded me so much of my dearly departed sister Carol. In an otherwise skeptical family, she was the only one who would choose a dog based on his astrological sign. Apparently she was not alone in her beliefs. That said, it was on the sales rack. 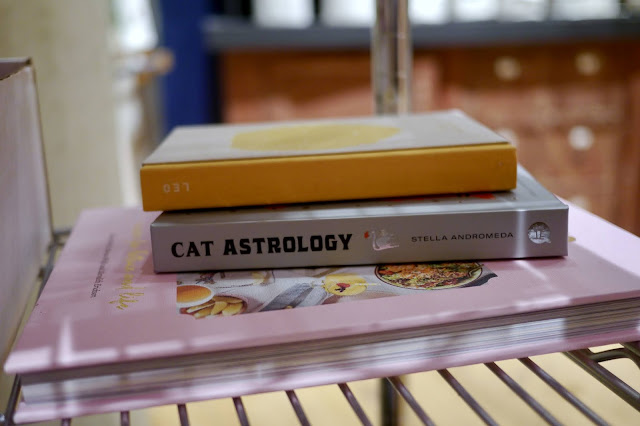 Weather-wise it has not been nearly as hot as is typical for this time of year. Lots of days of sunshine and a lot less rain, although we did get a doozy of a storm Saturday evening. Prior to the rain falling, it was so dim outside I plugged in the tree lights for a little cheer on a dreary afternoon. 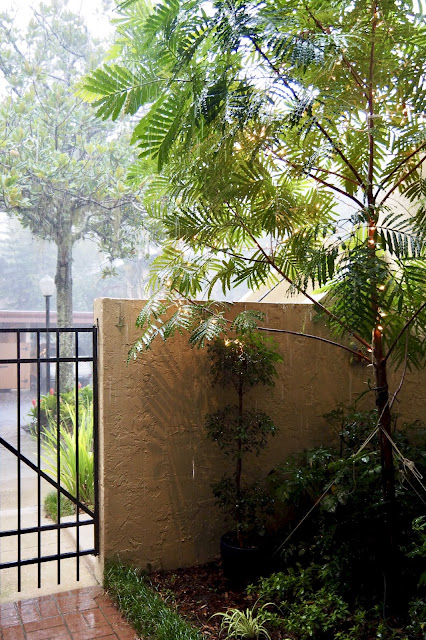 During these last months Bruce has let me sleep later than usual thinking it would be healing for what ails me. As such, it was unusual that I was up in time to see a lovely sunrise. 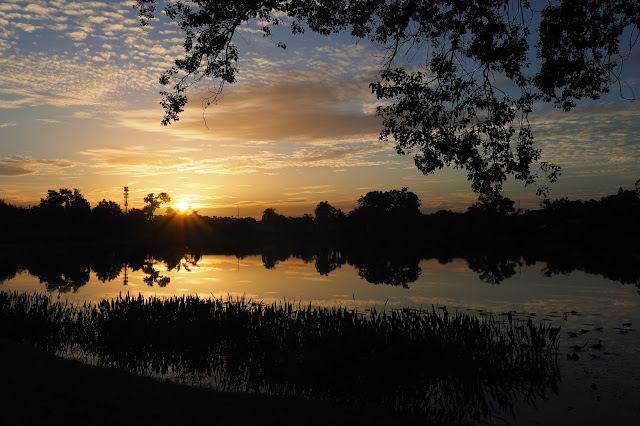 The puzzle is complete and was it ever a fun one. With super irregular pieces I'm not so sure how much my son-in-law Tom would like doing it, but I sure did. Then again, it would probably be far too easy for his skill set. 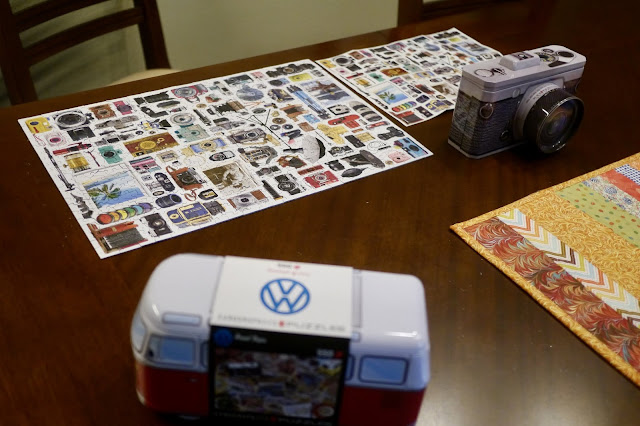 Next up is the VW one thanks to Nancy!

Frequently in this space there is mention of Bruce doing work at our church. Should you have wondered what projects he does, an example would be this tiling project under the water cooler. Apparently it leaked and ruined the carpet below, so he and John removed the icky carpet and Bruce laid tile for the first time. Following the service, he wanted to show it to me, and lo and behold, it was leaking on the new tile. 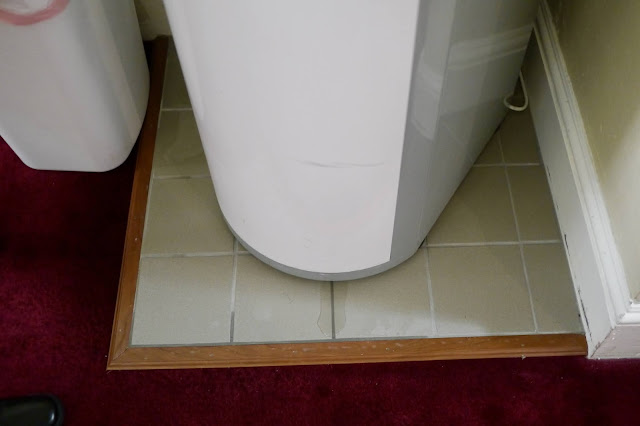 That will get sorted out on Wednesday when he returns to join others in yet another project. Not only did he and John work on tile last week, they spent most of another day repainting the benches and cubbies for the preschool. 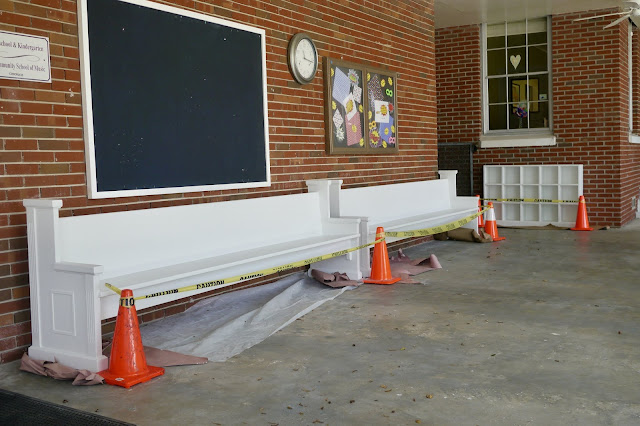 An old property needs constant maintenance for sure.

Following church, we walked a few blocks to have lunch at Prato on Park Avenue. On both of our visits we sat at the bar and chatted with the bartender who has worked there for nine years. It was two weeks ago when we first went there and the servers were busy with a bustling crowd. Yesterday not so much as the fear of Covid-19 has changed the dining landscape. 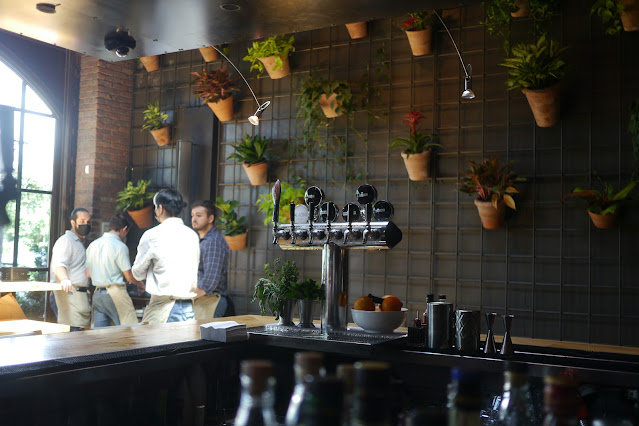 She told us the crowds are diminishing as the Delta variant keeps on spreading throughout the community. As well, she said her vaccinated sister just had a mild case. To say that we live in uncertain times is quite the understatement. The local hospitals have put elective surgeries on hold, the ICUs are full, and in general, it's a mess out there. Adjacent to the therapy building is a Centra Care. In the last two weeks we've noticed the parking lot being full and the receptionist at therapy tells me that each morning people are lined up on the sidewalk waiting for the 7AM opening for Covid testing.

Did I tell you that I can put the clean sheets on now? Big milestone for me as it involves pulling which is quite difficult with a still, very stiff wrist. Although I have been going to therapy twice weekly since mid June, there is still work to do to resume my normal range of motion, as they say in the business. Here's what the space looks like. I sit at the table with Lisa, and oftentimes, two others. It's pretty much amazing watching her juggle everyones needs at the same time. Very frequently one of the seated is a translator, as was the case this morning, provided by the hospital as many patients speak limited English. 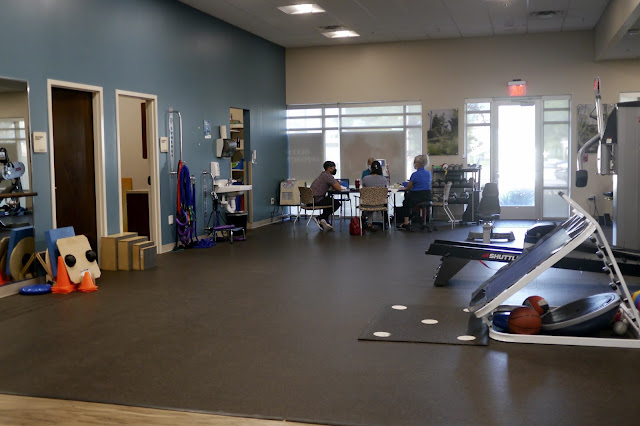 After some form of heat treatment, Lisa manipulates my hand and wrist. (yes, there is still a small scab) 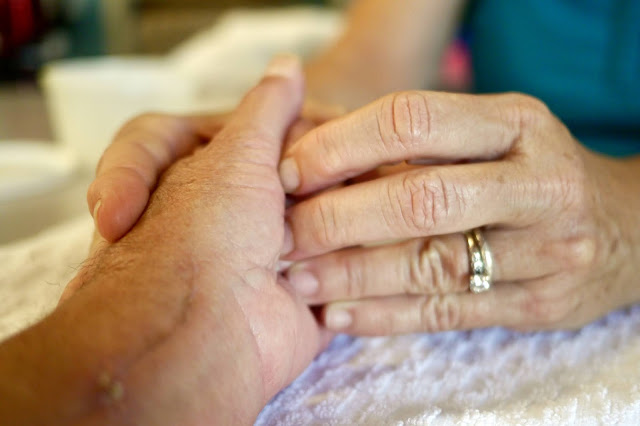 She then puts me through my paces using a variety of tools. 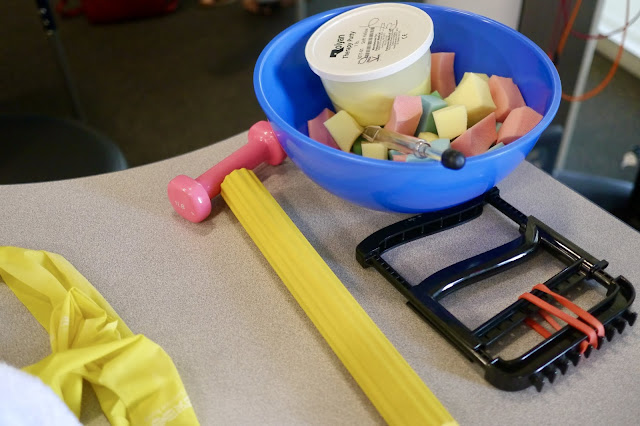 I am happy to report that I have "graduated" to the green clip. 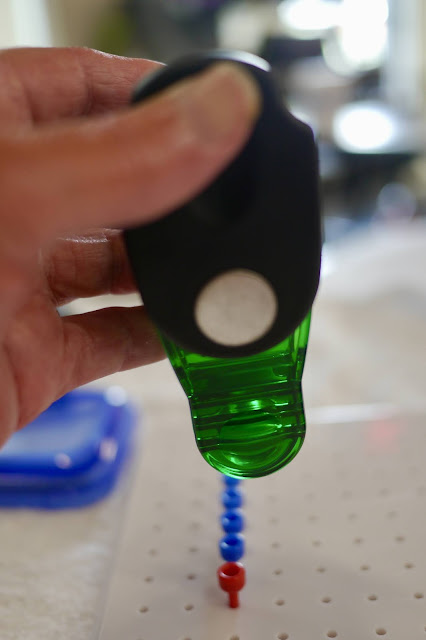 Furthermore, I am also happy to report that all of the work I've done in the pool has loosened my shoulder quite a bit, although putting my hair in a decent ponytail is something I've not fully mastered.

What I am not happy to report is the beloved Bobby Bowden has died. While not unexpected, when it finally happens, the news is never welcome. Matthew attended FSU during some of his glory days with Charlie Ward at the quarterback position along with winning a National Championship. If I remember correctly, he once saw him at a store. Jonathan also graduated from FSU and will always be a fan in part because of the legacy Bobby Bowden created in the football program.

Finally, it is my custom, while reading the daily newspaper, to read the "Today in History" column. Always a fascinating way of putting today's news into perspective. It might interest you to learn that on this day in 1910, the US Patent Office granted a patent for an electrically powered washing machine. While that development was good news for us all, the bad news recorded in the column today was that on this day in 2020, there were 5 million confirmed coronavirus cases in the United States. While that number was bad, it pales in comparison to the number of cases recorded a year later. Shockingly it is 35.8 million today! Obviously, compared to our total population the number is still small, but it does translate into around 1 out of every 10 people getting it thus far. Thus far being the operative words. Sadly, there are still people who won't get the vaccine, a fact that makes me plumb crazy. Think of the greater good, folks!!

Gee, I hate closing with that depressing news with today's title.