A String On The Floor 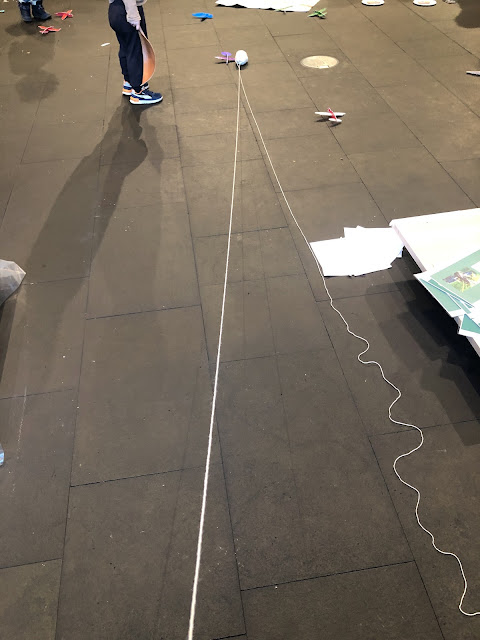 There was a ball of pink yarn on the floor in a room where children played. One end had been pulled out. I picked it up and retreated to the wall, where I sat on a ledge, holding one end of the yarn.
The adults in the room didn't seem to notice the line of yarn, treading on it, kicking it inadvertently. Every child who came my way, however, took note of it. Most simply paused in whatever it was they were already doing, then stepped across it, always, unlike the adults, careful not to disturb it. Many took the time to follow the string from end-to-end with their eyes, noticing the rest of the balled yarn at one end and me at the other.
When they made eye-contact with me, I would lift the string from the floor, only a few inches. One or two children saw it as a barrier and walked around the end, but most understood it as an invitation. Some took high steps across it, but the most common response was to jump or leap over it.
Some chose to do this repeatedly. I would raise or lower the string and they would choose where along its length to jump, selecting a height that, to them, seemed just right, whatever that meant.
Some looked at me, smiled, then walked right through the yarn, pulling it along with them across the room. They were watching to see what I would do, I think. I did nothing, except perhaps the drop my end of the string if it looked as if they might trip. These children often found themselves tangled, which became a puzzle of untangling.
One boy addressed the ball of yarn itself, picked it up, put it in his mouth, then circled the room, wrapping several children in this fine line of its embrace. Many didn't even notice, while others squealed, jumped, evaded, and ran.
Another boy stepped on the thread of yarn, looked me in the eye, then methodically walked the line toward me, step-over-step, carefully pressing the raised yarn to the floor until he stood in front of me beaming up into my face, mission accomplished.
At one point there was a half dozen 2-5 year olds jumping back and forth over the raised line of yarn. They said few words to one another, but despite the explosive, large movements in a small space, they managed to play this active game without bumping one another . . . At least not on accident. I mention this because a pair of children, clearly friends, made a game of jumping, bumping their bodies together, then pretending to fall down.
A baby, just walking, watched from a distance, then boldly approached the line when the crowd cleared. I lowered it to the floor and this baby. Like the big kids she had observed, she jumped as babies do, without ever leaving the floor. She did it again and again, back and forth, with an expression of concentration.
Meanwhile, whenever an adult passed by, whatever game we were playing was paused as I was forced to lay the yarn completely on the floor so as to not trip them; nearly all of them failed to notice this thread on the floor, treading on it and kicking it inadvertently. The children, to their great credit, tolerated these interruptions, waiting for the adult to pass as one might traffic or a sudden rain storm, then resumed their game until they had played to the end of their curiosity.
This is the role I value most as an educator: serving as dead weight, an anchor, a prop, a serviceable part as the children go about their lives.
******

"I recommend these books to everyone concerned with children and the future of humanity." ~Peter Gray, Ph.D. If you want to see what Dr. Gray is talking about you can find Teacher Tom's First Book and Teacher Tom's Second Book right here.
I put a lot of time and effort into this blog. If you'd like to support me please consider a small contribution to the cause. Thank you!