Some good news for those who come to this space for the photography. I've got some good ones for you today. In fact, although our little get away was short and sweet, so many photographic opportunities presented themselves, I'm going to be splitting this post over two entries.

As happens far more often than I'd like to think, some of the best photographs happen by chance. Or so it seems. Scanning through the ones I took over 2 1/2 days, one of my favorites was taken on a rest break when we stopped at an airboat place on 1-92, located on the St. Johns River. Pulling over to get some iced tea out of the cooler, I was struck by how colorful the place is and the great big fluffy clouds, a sight sure to please one of my faithful readers. The one thing Karen misses about Florida, after moving to North Carolina, is the clouds. 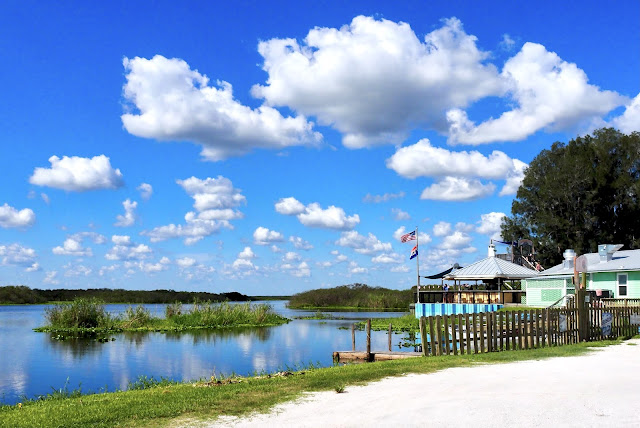 Looking at the image, I kept thinking what a hard jigsaw puzzle it would make!

Bruce's friend Bob asked to borrow our tent for the week so that he could test it out because he's thinking of getting a new one. Furthermore, he wanted Bruce to meet him at the campground near Sebastian Inlet for some fishing. As that is quite a drive in the early morning, I suggested we go over for a couple of nights and I'd book a room in Melbourne Beach. Not so fast Gail! Rooms there were few and far between so we ended up booking on the other side of the Indian River in Sebastian. Not the most convenient as it is between two causeways, but it seemed like it would meet our needs in spite of the drive. The place we stayed is owned by a couple and it has only twelve little studio apartments. 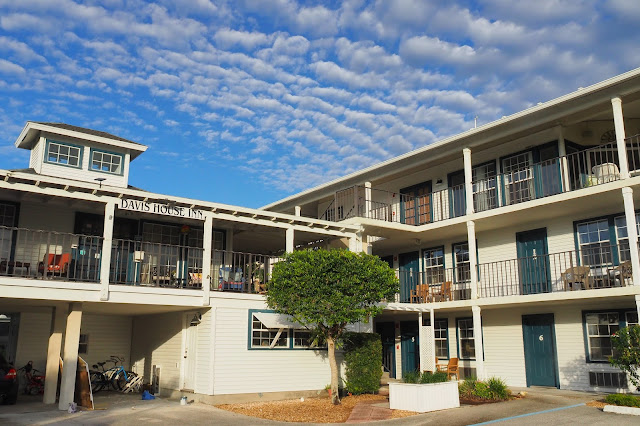 The family lives on the third floor and aside from them and another couple, we had the place to ourselves.

However, I am getting ahead of myself, so let's back up again.

Bob was out fishing when we arrived which allowed us time to check it all out. Bruce spotted a little rabbit! 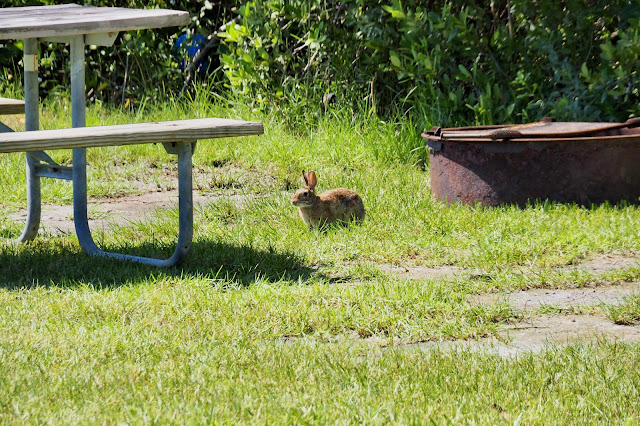 Almost all of the sites are situated on the water with large mangroves cut back to allow a kayak to slip into the river. 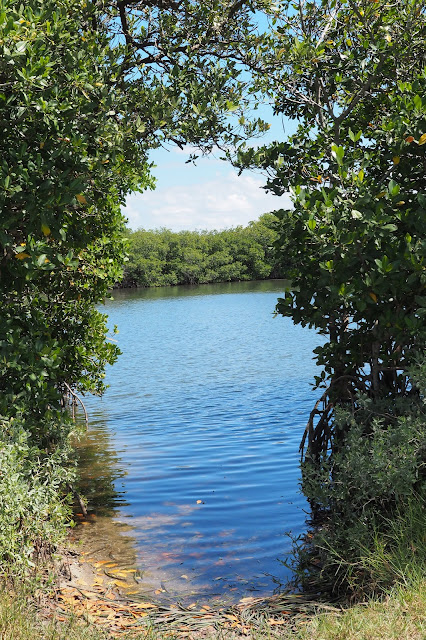 Situated on an island in the Indian River Lagoon, apparently it is the place to be if you like saltwater fishing, something Bruce had never done before. 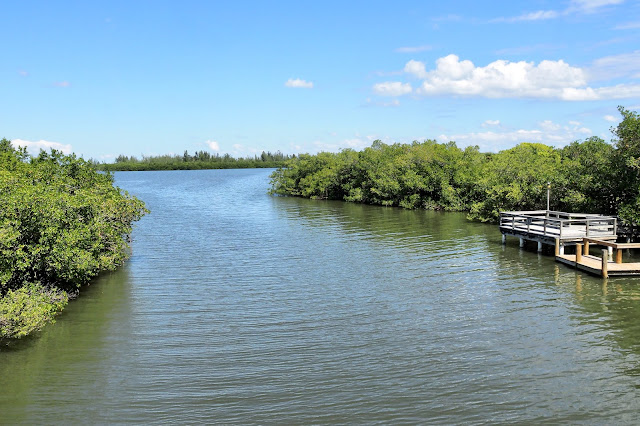 Ready to try his hand at a new type of fishing, particularly after we'd stopped to buy saltwater gear, that would have to wait for the morning.

For almost twenty miles we'd been driving alongside the ocean and not stopped. Finally we did and oh my goodness it was beautiful. 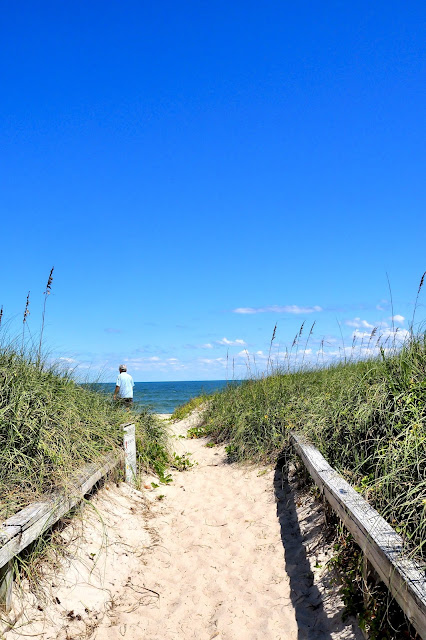 The view above is always one of my favorites when you get your first glimpse! Trudging up a short incline through the sand, you drop back down to this. 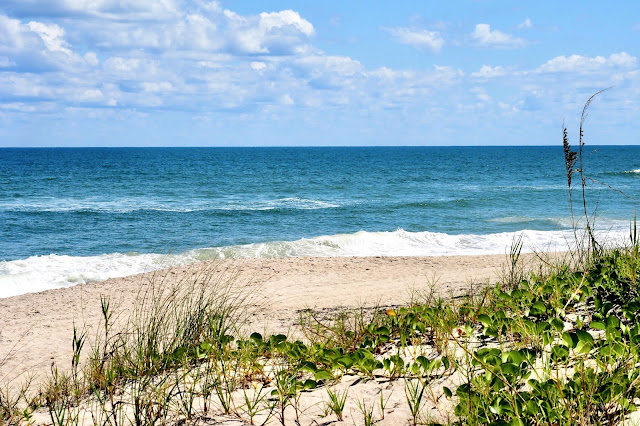 Normally I'd have jumped in because this time of year is absolute heaven at the beach, with drier air and not so blazing hot, however, seeing the rough surf I decided not to risk it. 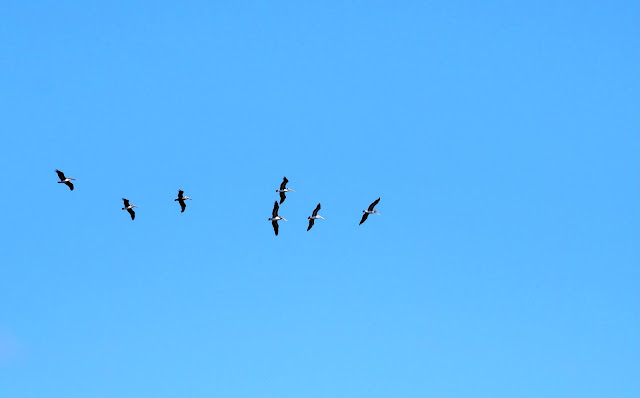 Can you say pelican alert? Plenty more to see later on.

Driving about nine miles down A1A, we turned onto the causeway that would take us back over to US1 where we turned right to head north again. Arriving at the Davis House Inn, our host checked us in, gave us the keys, and we moved in for two nights. One of the reasons I chose this place is because multiple restaurants were within walking distance. Our first waterside meal at Captain Butchers did not disappoint. Fresh shrimp and crab cakes for the win! 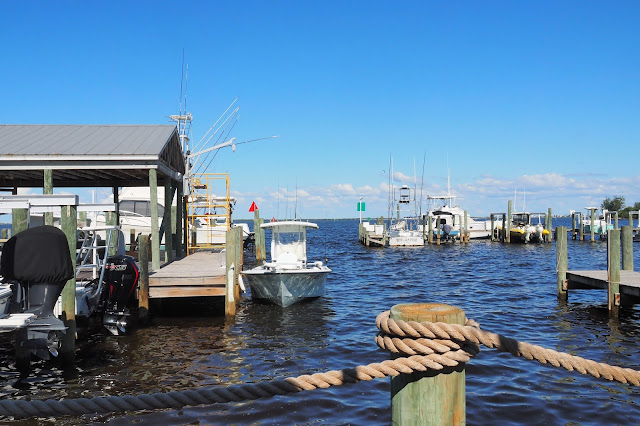 While I love the ocean, I'm just as happy to be on the river. In fact, I've often said, if we lived on the coast I think I'd prefer being on the river where everything is just a little closer.

Later on we checked out the owners dock which is available for use by the guests. As well they have kayaks and bicycles and free parking. Who doesn't like free parking anyway? 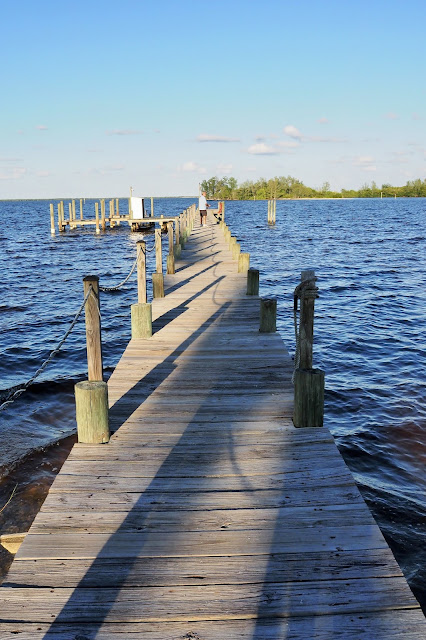 As you can see the river docks are quite long as we saw this seems to be the norm for whatever reason. There was a fantastic breeze off the water and I watched birds while Bruce fished. 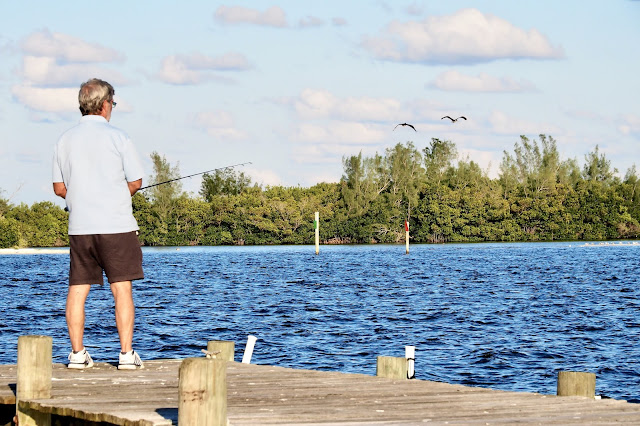 I was to learn the following afternoon that there are multiple islands in the river in this area where birds love to congregate. 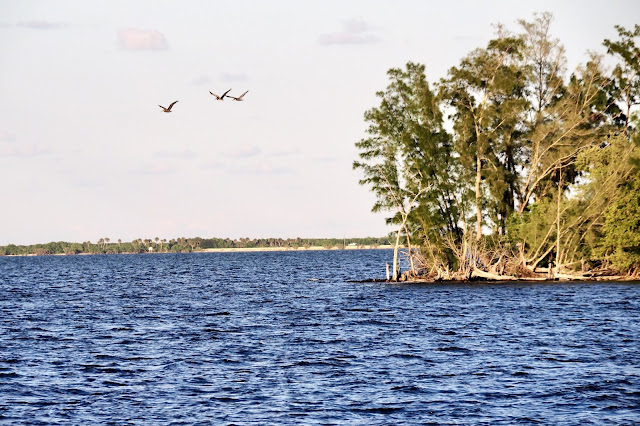 On the other side of the water is the Atlantic Ocean.

I was a wee bit nervous my first time on the long dock, don't ask me why! The Davis House Inn is across the street. 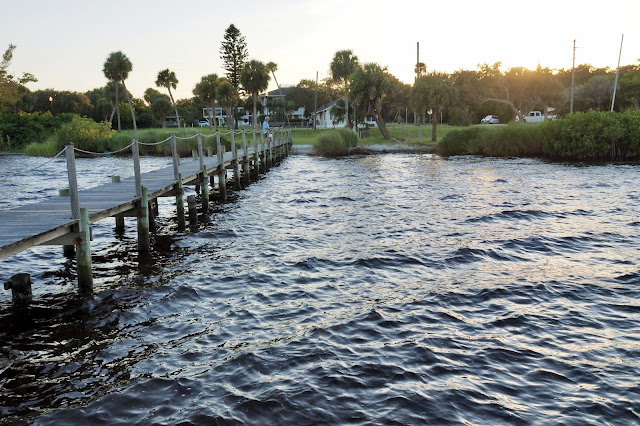 Bruce had an early morning wake up call so bedtime was about normal for us early to bed/early to rise folks. Driving in the dark is not his favorite, but sunrise was not too far off as he drove the 18 miles back to the campground. Have you noticed how the days are shrinking? As well, thinking about that mileage, for those of us living downtown, Walt Disney World is about 25 miles away putting this into perspective. Speaking of WDW, today is the 50th anniversary of the opening date! The front page of today's newspaper had the articles from that historic time in Orlando history.

Following his departure, I made some tea and went across the street to await sunrise. It did not disappoint. 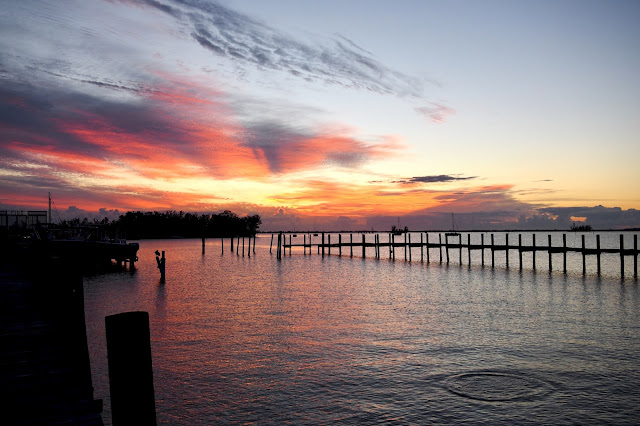 Nothing like some brilliant sun rays to begin ones day, eh?

Generally I can entertain myself, but while I did for part of the morning, what I was super stoked for was that the one friend that I had at Melbourne High School had seen my photo post on Instagram and immediately got in touch to plan a get-together! How crazy is that? Having not seen Peggy in 50 years, I was so looking forward to our time together, but first I had a few hours to kill.

There is no doubt you can imagine what I did, is there? 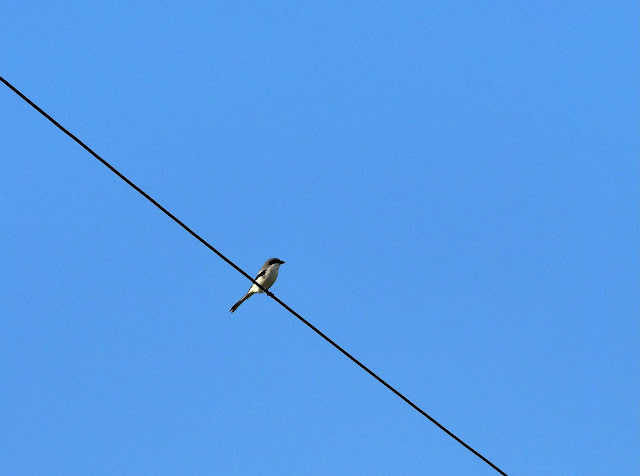 A wide sidewalk runs alongside the river for miles and I took advantage of exploring new surroundings for the first time in nearly a year. Above is what I'm thinking is called a Loggerhead Shrike, a bird I've never seen before. As you can imagine, I was ecstatic. The same held true when I walked on the city owned dock and well... 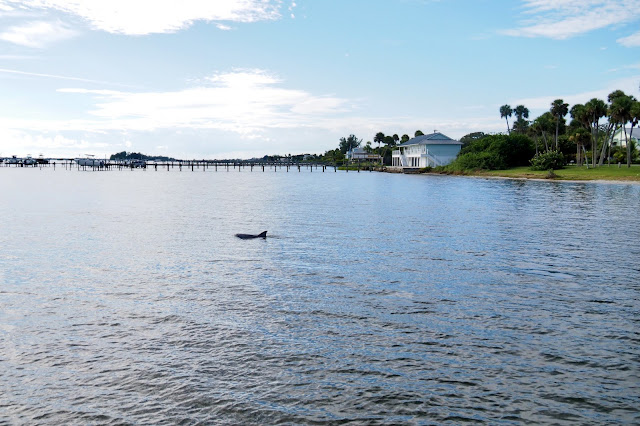 Yup, a brief dolphin sighting, one of the things I was most hoping to see. Later, while chatting with Bruce about this excitement, he burst my bubble telling me he saw about a dozen frolicking in the water near their boat. Lucky!

Upon my return, it was not too much longer when Peggy arrived to pick me up and take me to their home about six miles away. Oh my, was it a wonderful home, bursting at the seams with super cool decor and objects of art. 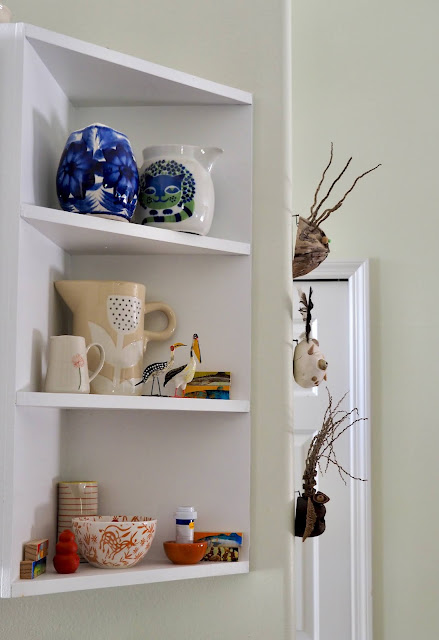 At every turn I was exclaiming my delight at, well, everything, from the wall art, to the gardens, to the pool. One of the things that so enthralled me was seeing so many pieces of needlepoint designed and executed by Peggy's mom. 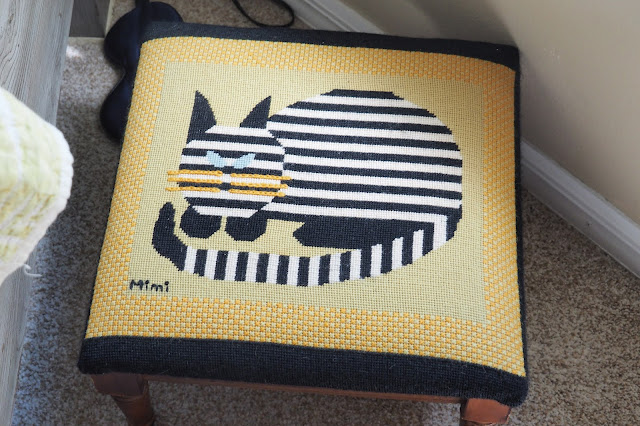 Isn't it fantastic?? Peggy is a jigsaw puzzle enthusiast and sent me back to the Davis House Inn with loads of new puzzles that I will be sharing with anyone brave enough to tackle 1,000 piece puzzles. A few 500 piece ones will stay with yours truly for the time being. When I mentioned we'd stopped at the beach, she told me that a week ago the surf was such that it knocked her down, and she literally had to crawl out. That made me doubly glad that I'd not gone in!

Gosh it was good to see her and meet her husband and my only regret was that our time together was too short as obligations called. Hopefully it will not be another fifty years...

There's more to the story but I'll save that for another post leaving you with plenty for now. Except, why not close with a Mockingbird, our Florida state bird? 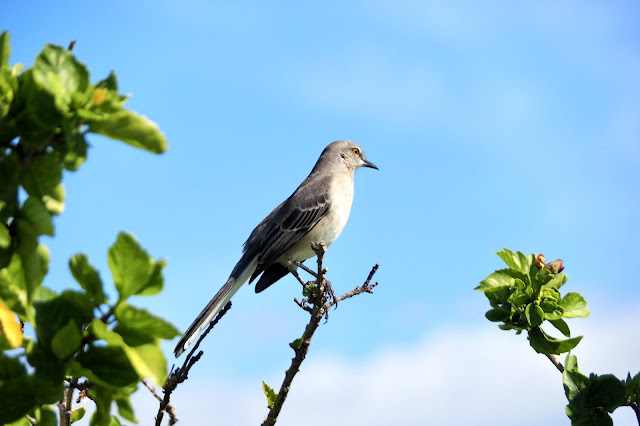 p.s. Do not ask me why I did not get a photo of Peggy...I have no good response.