Welcome to my tour stop! Check out an interview
with the author and enter the tour giveaway below...
The first book in this series, The Jade Rebellion, is currently
discounted, $7.99 for paperback and $2.99 for ebook! 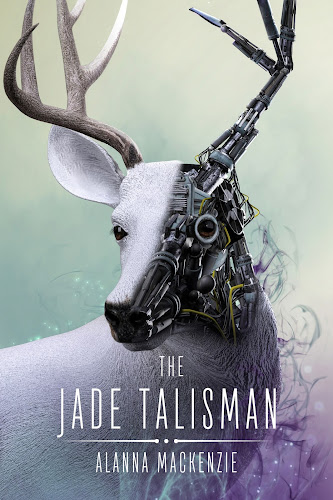 A talisman. A song. A gift that bends time, and alters the course of destiny itself.

It is the year 2762 in the Empire of Khalendar, and AI Masters rule the civilized world, striving to crush all dissent. But they have not yet managed to quell the Jade Rebellion or its leader, Walter Saltanetska. The rebels have sailed beyond the Empire’s borders to the infamous isle of Vei’arash. Their mission is to find animal spirits exiled long ago by the AI Masters, and return them to the mainland. With any luck, the spirits will strengthen the fading magical powers of their allies, the Western Mages, and join the battle against their oppressive rulers.

As the rebels plunge deeper into the jungle, physical laws are upended. The plants and animals of the rainforest are inextricably linked to divine beings. An ancient shaman-god entrusts Walter with the Jade Talisman, an enchanted gemstone that warps the basic rules of time and space.

The Talisman allows Walter to gaze into a mesmerizing labyrinth of future possibilities. But the visions it offers up are troublingly dark, giving Walter insight into the potential fates of himself and his loved ones. This gift proves to be a crushing burden, and Walter desperately longs for an ordinary life. But there is no going back…

The gripping sequel to The Jade Rebellion, The Jade Talisman explores whether nature and spirituality are capable of persevering in a world dominated by the cold logic of artificial intelligence.

For those new to the series, what should they know?

Readers who are new to the series should know that these books are not typical science-fiction or fantasy novels, and they do not follow a linear, straightforward plot. I would say that they are geared towards people aged 15-35, so they are suitable for less mature readers, but should be read with an open mind. They are perfect for people who are looking for something a bit genre-bending, and who have an interest in questions related to artificial intelligence, environmentalism, spirituality, the nature of consciousness, and the interactions between emotion and reason. Most of all, readers should be interested in exploring these topics from a literary, as opposed to a scientific perspective. While the books touch on a number of complex topics, at their core they tell a story of one young man’s journey and the adventure he embarks on when he makes a single, life-altering decision. They approach high-level subjects but they are relatively simple to read and understand.

Would you tell us more about the main characters from The Jade Talisman?

The central character in the novel is Walter. He is a young man with a unique talent for languages and coding, and an ability to understand how computers and robots work. In The Jade Talisman, he acquires another gift – the ability to envision different possible futures. All of this makes Walter uncannily similar to the AI Masters, the artificially intelligent machines who rule the Empire of Khalendar. But Walter is not an AI, he is human. He grew up in Crystal City with wealthy socialite parents, but he was always drawn to more intellectual pursuits, like reading literature and tinkering with computers. He secretly idolized his strong and athletic brother Jonathan, who was his polar opposite. After Jonathan ‘died’, Walter became depressed and withdrawn and his memories and dreams began to fade. After he graduated from college, Walter obtained a prestigious job in the Khalendar government where he had to translate AI code into comprehensible Khalendi, so that the commands of the Empire’s rulers could be carried out. Walter appears on the surface to be a typical conformist, but rebelling against authority runs in his DNA – his ancestors were dissidents who were exiled to the island of Vei’arash after they resisted the AI Masters’ rule. It is in Vei’arash that Walter discovers his totem animal – the stag – and where he is bequeathed the powerful gift of seeing visions of the future by the god Shiva.

Elaine is Walter’s girlfriend, and her capture by the AI Masters is the reason why he decides to give up a comfortable life in Crystal City. She was born and raised in Te’yara, a village in a southern territory of the Empire, which was conquered long ago by the AI Masters. She moved to Crystal City so she could earn money as a caregiver for the children of wealthy Khalendi elite. Before she was captured by the AI Masters, her main goal in life was to make sure her family had enough food to eat, like in the old days before the AIs had conquered their territory. Walter is drawn to Elaine because she is the opposite of the wealth-coveting masses of Crystal City – humble, compassionate, and down-to-earth.

Cyriana is a Mage princess, the daughter of Nuada, who rules a magical kingdom to the south of Crystal City. That kingdom, Serrahan, is one of the few remaining places in the world which has not been disturbed by AI conquest. When she was younger, Cyriana ran away from her village in a fit of rebellious rage and spent several years living in Crystal City. There, she naively fell for the first handsome young man she met, Walter’s brother Jonathan. When Jonathan unexpectedly disappeared, Cyriana was left without any guidance or direction, and she had no choice but to return to her quaint and sleepy village in Serrahan. Fortunately, she found happiness there because she met Tristan, a young Mage with a calm and wise personality. Cyriana is a minor character in The Jade Rebellion, but she plays a much more central role in The Jade Talisman. On the island of Vei’arash she meets her totem animal, a jaguar, which brings out her dark side.

Eva is the sister of the founder of the Jade Rebelllion, Emilia. Like her sister, she has supernatural gifts. Eva’s gift is best described as a “twisted version of telepathy” – the ability to communicate with others just by thinking, but only when the other person is using some sort of machine to communicate. Eva can also communicate with AIs, and she can transmit and receive thoughts from them, detecting their thoughts as if they are radio waves passing through the air. Eva has a special relationship with one AI Master in particular, named Asana, who helped her out when she was struggling in her youth. Eva considers Asana her friend, but this friendship makes Walter concerned about the possibility of Asana infiltrating and spying on the rebels through Eva.

Which character do you most relate to and why?

I think there are aspects of all of the characters that I relate to in some respects, but if I had to choose one it would probably be Walter. Many readers I’ve spoken to describe him as a feminine character, and I think that’s accurate. He lives in his head a lot, and he is very sensitive and emotionally aware. He has a lot of self-doubt, and he never wants to let others down. At the same time, he is not a passive character, and he grasps the urgency and need for action. He is driven to act by a sense of morality, but he recognizes that the boundaries of morality are blurry. He navigates challenging situations while facing an internal struggle about whether he’s choosing the right path. He is curious about intellectual and ethical issues, and he approaches life with a sensitive and open mind.

What advice would Walter give about navigating his world?

He would probably advise you to always be on guard - guard yourself against enemies disguised as friends, and try to make your mind a fortress. He would say that even if everything seems hopeless, there are glimmers of hope that make everything worth it. Occasionally in life, there are moments of perceptiveness and understanding that elevate you above the difficult and challenging maze that you have to navigate, that make the puzzle pieces come together. Live for those moments, and be patient because they don’t happen very often. He would also say that any risk is worth taking if it’s for love.

Was there anything more rewarding and more challenging as you wrote book two?

The rewarding part was knowing that the series didn’t just stop at book one, and that the real adventure had really just begun. The challenging part was creating characters that were believable, dynamic, and relatable.

What’s something you enjoy doing when you’re not reading or writing?

Swimming. I find it really meditative and relaxing, and I try to swim about once every week.

What are you working on next?

The next book in The Jade Chronicles series, of course!

Other Books in the Series 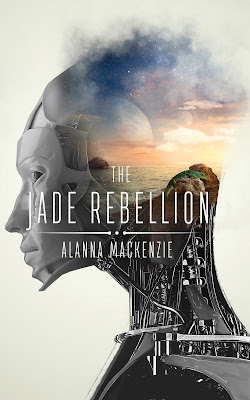 The Jade Rebellion
(The Jade Chronicles #1)
By Alanna Mackenzie
YA Sci-Fi, Fantasy
Paperback & ebook, 204 Pages
March 30, 2021
Summary
A reckoning. A rebellion. The worlds of artificial intelligence and ancient magic collide.

​​Crystal City glistens with diamonds, but its dazzling beauty comes at a deadly price. The capital of Khalendar thrives on a steady supply of gemstones from the neighboring Barrens, a colony of the Empire. Walter Saltanetska translates AI code for the Khalendar government, helping to breathe life into the ambitious vision of the AI Masters. When Walter discovers a terrible secret which could destroy the life of his lover, Elaine, he decides to tell her despite strict orders to keep what he translates confidential. What begins as a catastrophe eventually grows into a rebellion. Elaine is taken captive by the AI Masters, and Walter must do everything in his power to rescue her. He starts his quest with a single goal in mind, finding Elaine, but along the way Walter discovers that saving her is only a small part of his destiny. During his travels, he encounters a long-lost relative, a warrior matriarch, and a mystical kingdom forgotten to time. Yet Walter's true journey occurs not in physical space, but the captivating depths of his mind.

An inventive blend of dystopian science-fiction and fantasy, the Jade Rebellion explores whether we can overcome technological determinism by preserving history, nature, spirituality, and ultimately, our humanity.
(Affiliate links included.)
Goodreads│Amazon│B&N│Bookshop│Book Depository
Currently discounted! $7.99 for paperback and $2.99 for ebook!
About the Author 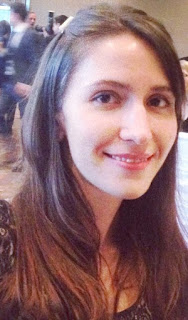 Alanna Mackenzie lives in Vancouver, Canada. She holds degrees in History, French studies, and Law from the University of British Columbia. An environmentalist at heart, she believes in using the law as a tool for social and environmental change. When she is not pursuing that passion, she can be found brainstorming the next chapter in her novels, playing Irish fiddle tunes on the violin, and hiking West Coast trails.

What did you like about the interview? Will you be reading this series?
Back to Feed
Use left/right arrows to navigate the slideshow or swipe left/right if using a mobile device