Yesterday afternoon Bruce called out to me from the living room, "are you in there writing a blog post?", in part because I was in front of my computer for a good long while. My answer was "no, I'm looking for a bathing suit". Not that I am excited about buying a suit online, but after going to the mall yesterday after my therapy appointment, my hand is forced. As with so many things in our pandemic world, there seems to be a shortage of bathing suits in stock. Far better than the reported air conditioning shortage we read about in today's newspaper though. In other pandemic related news, Florida Mall does not open until 11AM on Monday. As for the other days of the week, I have no clue. While pulling into the parking lot, I saw the security doors down on Dillards and thought the store must have closed, however, once parked and into the mall, I discovered that all of the stores were not open at 10:45. An FYI for those who still shop at the mall occasionally. The now familiar help wanted signs in shop windows were everywhere. It's a mixed up world out there, to say the least.

The weather has been unpredictable of late. This morning, when we were meant to have our class at the pool, it is raining, whereas we had none over the weekend. This time of year sunsets are usually not nearly as dramatic as during the winter, but boy do we still get some amazing skies when storms come in. We were even more amazed when we received very little rain from this. 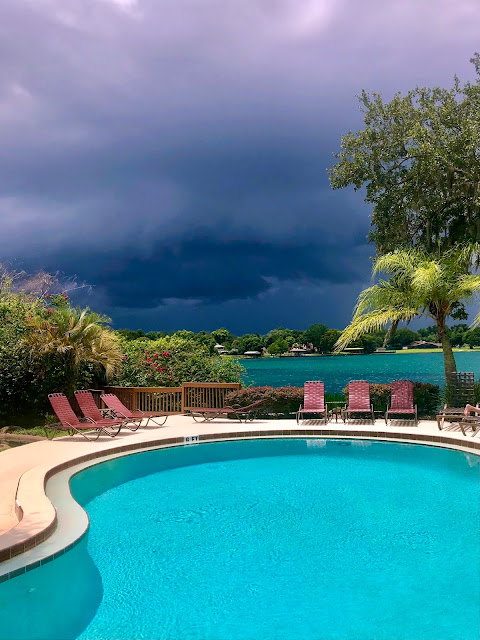 The still-shining sun caused the lake to look as if we lived in the Caribbean.

Just when I thought I had it bad, a story appeared in the newspaper that made my troubles pale in comparison. If you can imagine, a man was cycling in a park in South Florida and his tire blew out, sending him tumbling down an embankment where he landed in a water filled canal. Sounds pretty terrible right? What's even worse, he fell onto an ALLIGATOR who chomped down on him!!! Bystanders of course were freaking out and one kind person eventually pulled the man out, using a dog leash as a makeshift tourniquet to stop the bleeding. They always say truth is stranger than fiction and so it seems in this instance.

Another thing of interest, at least to me, is Caeleb Dressel, the American superstar swimmer at the Tokyo Olympics. His amazing accomplishments in the pool are well documented. What I find so fascinating is that he is from the tiny town of Green Cove Springs, Florida.  With a population of around 6,000 people, isn't it remarkable that it is also the birthplace of Charles Merrill of Merrill-Lynch fame? Also some Floridians will be interested to learn that it is also the home of Gustafson Dairy. There are so many Olympians with fascinating stories, one of the things I so love about watching the games. My admiration for their skills increases daily as does the dedication they exhibit, oftentimes at the expense of their own well being. I cannot imagine being the parent of any of them, worrying and watching on pins and needles in their homes!

Apparently I am way out of practice with my photography because this morning I did something I cannot remember doing---erased pictures from my camera. Boo hoo! One of the ones I erased was of something new I'd done in therapy which was pretty complicated. First I used the end of a highlighter to poke holes in a special putty, followed by distributing ten pennies in the holes. Followed by rolling the putty into a log shape, then picking at it to remove the pennies. Lots of different movements were involved. Turns out I've already done 15 sessions and it has definitely helped. I came across this photo of me and Michelle taken in the middle of May and it clearly demonstrates the source of my current difficulties. 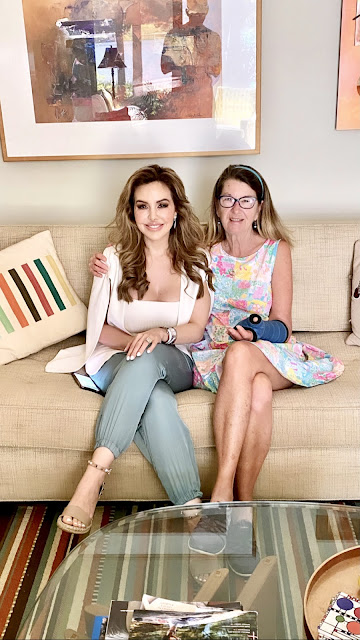 Keeping my hand upturned like that caused my shoulder problems and my encased thumb for six weeks caused me to lose some function there. While I can bend my thumb at the big joint, it still remains stubborn on the one closest to my nail. The good news is that both are improving. The sores on my arm remain, but they too are improving. Because my fingers are working pretty well I can do so much more than I could a few weeks ago. When I can put my hair into a ponytail by myself will be the ultimate victory!

Nancy brought two cute puzzles, one of which I am working on now. Doing a puzzle is good for my dexterity although I will admit that the tiny pieces of this one are really testing me. That said, I am amazed at the quality of the image on the tiny pieces making it fun to put together. Of course you probably already knew that I would love a puzzle of vintage cameras, didn't you? 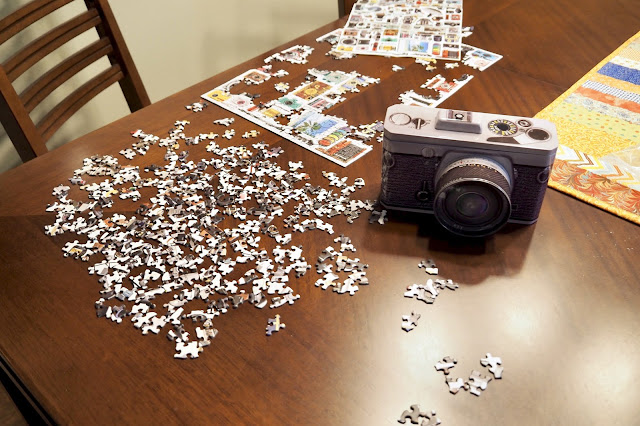 Another good sign of my improved spirits is that I am paying more attention to what is happening on the lake. Maybe saying that I do something about what I see is more accurate. Yesterday I saw more ducklings which is really surprising me because I was sure that time of the year was over. 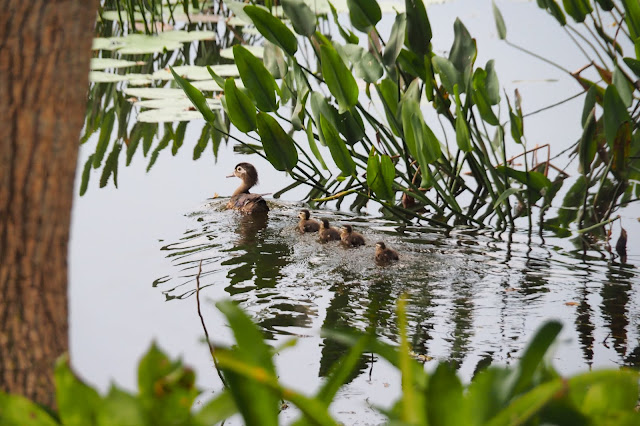 I wonder how long it will be until the male Wood Duck gets his new feathers after molting. (pictured closest on the log) 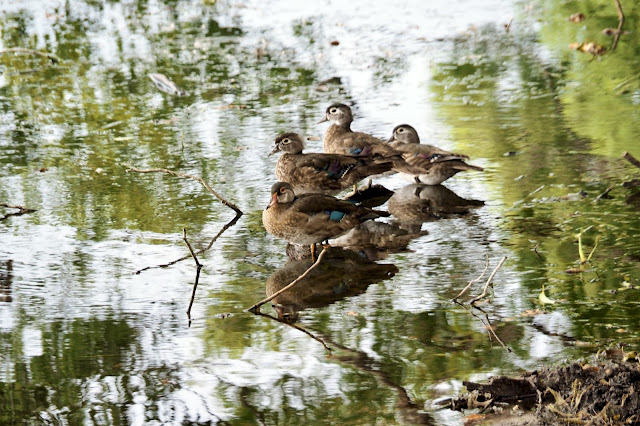 The molting change in the three females is far less dramatic.

Bruce's time spent fishing has been greatly reduced because he has found a new love, although he did take my kayak out last week and found success. 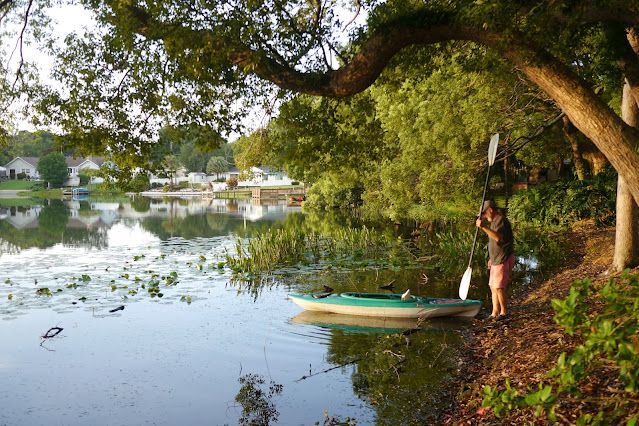 One thing I am lacking these days is confidence when I am out and about. Sounds silly doesn't it? I look forward to the day, hopefully in the not too distant future, when I can go about my business carefree as a bird again. 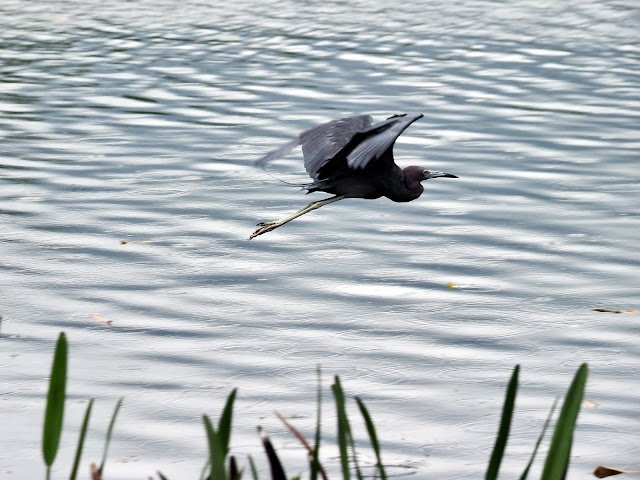 One such example is yesterday when I approached the down escalator at Macys. Pretty much never before have I hesitated, but hesitate I did. In fact, I went looking for the elevator, taking it down instead. That's what I'm talking about.

Something you may not know about me is how distracting I find parentheses. If I begin a novel and the author uses them aggressively, and in my opinion excessively, I put the book aside. That happened recently and while it may have been a good story I just couldn't get past those darn parentheses. Weird, right?

Because I deleted my photos, the musings continue in text..

Medical bills have been arriving. To say that they are mysterious would be accurate. Just this last week an amount due of $791.89 came in the mail from Downtown Surgery Center. Page three had a line item, quantity one, 5/26/21, distal radius fracture. Charge was $17,502.00 with an adjustment of $13,167.53. Payments, $3,167.55 leaving the balance of $791.89. Because the last I knew my surgeon's office is Orlando Hand Surgery I called the provided phone number to find out who I was paying. Was this for the operating room? Is anesthesia included?  Mind you, the address given on the bill for the surgery center is Morrisville, NC and I am meant to send the payment to Chicago. Although the phone was actually answered in short order by a human, she really couldn't tell me who or what I was paying. Another huge charge of $6,996.83 is for Adventhealth Infusion Center. What is this for? Medicine is frustrating in all kinds of ways, and this is yet another bad mark in my opinion. What happened to an itemized bill? I can't help thinking how hard it must have been for my mother-in-law navigating the bills for the almost year that my father-in-law was hospitalized before his death.

Remember a while back I wrote a post called, Wrinkles Welcome? They are most definitely back! I had Bruce take the photo below to not only show them, but the pretty new ring he bought for me as well. I discovered a ring without a stone in a jewelry box and we had it filled with my birthstone. Funny story there---I thought my birthstone was Aquamarine and he asked for that. I went with him when he went to pick up his repaired chain clasp and was looking at the cases when I discovered that I had the wrong gem! Duh! Fortunately they had not ordered the requested Aquamarine yet and were able to get a Blue Topaz instead. 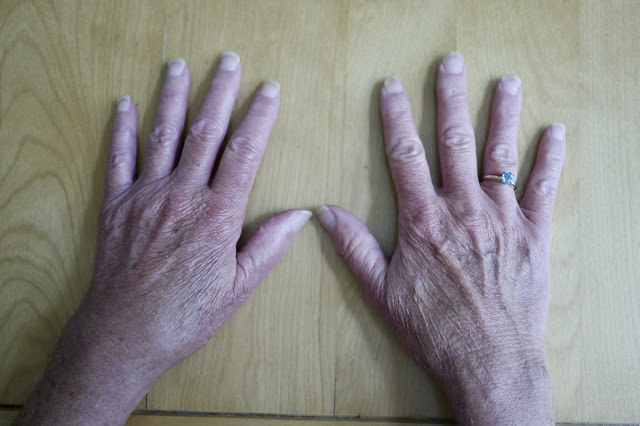 I couldn't help thinking, looking at my old hands, that perhaps my insides look just as old and just take longer to heal. What do you think? Is my thinking crazy? There is still some swelling but hopefully before too much longer I will be able to wear my wedding band again after four months without it. During my emergency room visit for my first break there were some tense moments when it took three different people trying to get it off before my fingers swelled too much and it would have to have been cut off. That would have made me very sad.

Well, there you go, a mixed bag for sure.