A Conversation With The Voices Of My Hero Academia: World Heroes’ Mission [Interview] 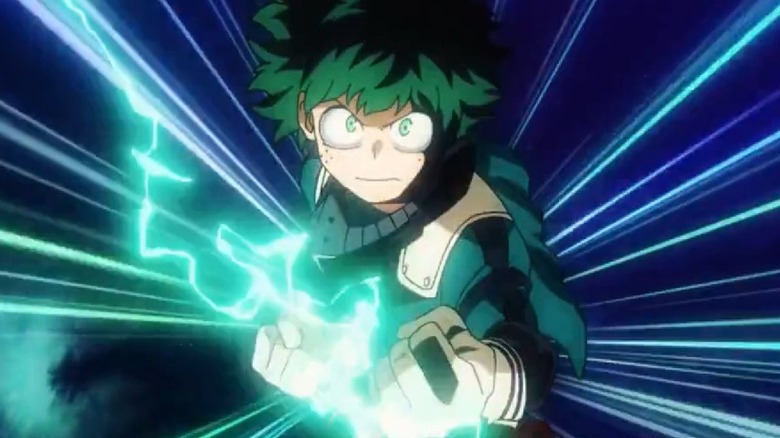 Initially released in 2016, the anime series (based on the manga written and illustrated by Kōhei Horikoshi) is set in a modern world where nearly everyone has individual superpowers, called Quirks. The young Quirk-less Izuku "Deku" Midoriya is given a super-strength Quirk and a mentorship by the superhero All Might in hopes that he will grow into his fist-punching successor as he attends the prestigious U.A. High School in Class 1-A.

In "World Heroes' Mission," the third movie in the "My Hero Academia"-verse (the series itself is flying toward season 6), the world is in peril when the terrorist cult Humarize seeks to purge those with Quirks. Class 1-A search for the Trigger Bomb to prevent a repeat of a previous terrorist attack. They are joined by new characters, including Deku's new friend Rody, who is not all that he seems.

"Everyone Had A Different Setup When The Pandemic Started." 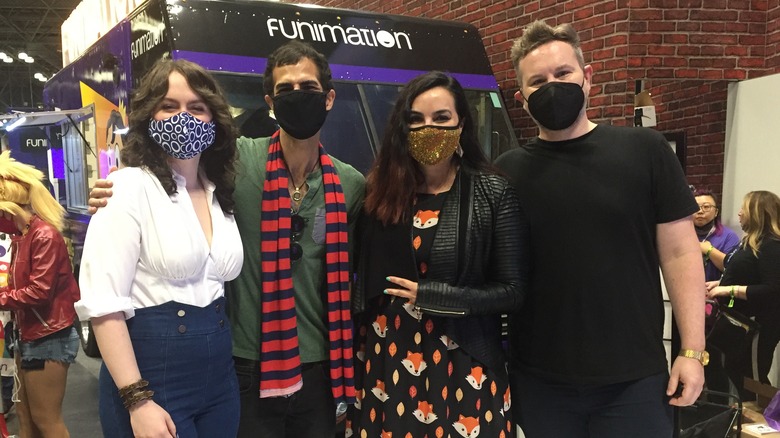 How did you land your roles?

Ryan Colt Levy: It was a few months ago. I read for season 5, actually, for a few characters. I was very excited to get the opportunity because I had never gotten the chance before. And basically it was like radio silence for about five months. I was secretly holding on that I would book one of those characters. One day, I got an email from Colleen Clinkenbeard [the director], and she asked I would like you to play this part and I died.

Sarah Roach: Similarly, I auditioned for season 5 for different characters. So when the time came and they called me in, they hadn't told me exactly what it was. When I was able to watch, I was like, oh wait, that can't be me. That's not the person I read for. Then I went in an auditioned another time. That happens a lot. You audition for one thing and they place you somewhere else.

Lisa Ortiz: It was the same for me. I read for season 5. Then time went by. I thought, okay, next time. Later, Colleen emailed me and asked if I was interested and I was like, yeah!

Did you see the entire Japanese version before getting in the voice booth?

Just get in the voice booth and do the scene?

Levy: Yeah, when you're brought in, you're only seeing your scenes that you're working on. The way you get contacted is talking with the director and asking what is the grand scheme of what I'm working in the moment? It's a like a puzzle like that.

Roach: You depend on the director calling out to you. You [already] get a handle on the writing that Jeramy does to see what they want, to be able to read ahead.

You recorded during the still-ongoing pandemic. How was that process like and what technology did you work with?

Levy: It was not that long ago that we recorded. A lot of studios are taking safety precautions. It was kind of a hybrid because [Colleen] our director is in Texas. So even though I was in the studio, it was remote. I never got to see her in person. A lot of it is a disembodied voice that I trusted.

Roach: Same with me, I was in a studio at the time. I was in Texas as well. It was still by myself, remote. I was in a ghost studio and I walked in and didn't see anybody.

Ortiz: I was able to work at home for this. For me I have a professional booth in my house. I did bat my cats away from the door a couple of times.

Levy: They [the cats] want to be part of "Hero Academia"!

Ortiz: If I leave the booth open, the cats will sit in front of the microphone. So you're not seeing anybody [physically]. But you have the same process [like Levy and Roach].

Could you talk more about the technology for the home studio?

Ortiz: Right now, everyone had a different setup when the pandemic started. There was big rush for voice actors who were not able to go into the studio, the booth, to make sure that their gear was top tier for work. I have a booth. I have a studio-grade microphone. There's ton of gear that goes into it. You set that up and they do a test with you to make sure that you're set. There's special system you have to used. There's a lot of prep that goes into it.

"I Questioned If Colleen Actually Did Know Me Because We Never Met Before." 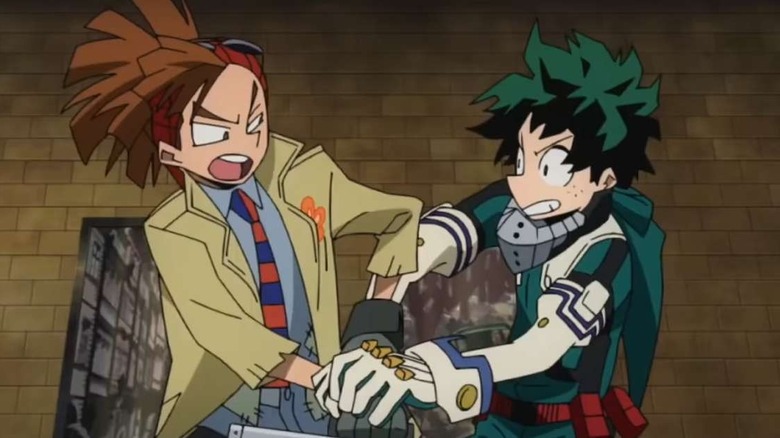 How do you form a connection with your characters?

Levy: Very deeply, to the point when I working on the movie, I questioned if Colleen actually did know me because we never met before. She knew that [Rody] fit me. It's eerie. The more that we worked on the film, there are so many layers [in Rody] that are deeply connected to my life and the way that I lived and experience. I was shocked how similar [he] was.

Roach: For me, Clair is really serious about her job. I think she doesn't show it but she cares deeply about being a hero and saving people. I connect to that.

Ortiz: When I saw the character [Burnin], it makes perfect sense for me. She got a little of a brash. But she has this serious hardcore focused side to her. We're still touching the tip of that. We have a lot in common, except for the hair.

Rody becomes Deku's friend in the movie. Ryan, you have a lot of chemistry bouncing off Justin Briner, the voice of Deku. Did you work with Briner at some point before?

Levy: Thank you so much, means the world to me. I know Justin only through social media. He reached out to me over a year ago before I was even a part of ["My Hero Academia"] just because we were fellow voice actors. I remember writing to him how much I love his performance as Deku throughout the show. He did a lot of his recording before, so when I got in the booth I got to play off his performance which was such a gift.

What are you vocal warm ups?

Levy: I drink coffee, which is a big no-no. [Laughs]. I do breathing exercises. More often than not. Our voices are the machines. You build up an endurance of your voice. Sometimes, you don't really get to breathe in between and you have to get that thing out.

Roach: I always have ginger tea. I do some scales and tongue twisters and stretches and feel connected and grounded.

Ortiz: I do a lot of singing as well. I have a voice coach. LA is a dry place so I hydrate with a lot of water.

Talk about working with Kaatz

Levy: [New York Comic Con] is our first time meeting him in-person. We worked on a lot of different properties and things and scripts that are all different. I feel like it natural when his writing is so good and you don't have to think about what the intentions are.

Some of you, Sarah and Ryan, are new to the "My Hero Academia" franchise. Do you see more of a future in the franchise?

Roach: I hope so. We don't know at some point. 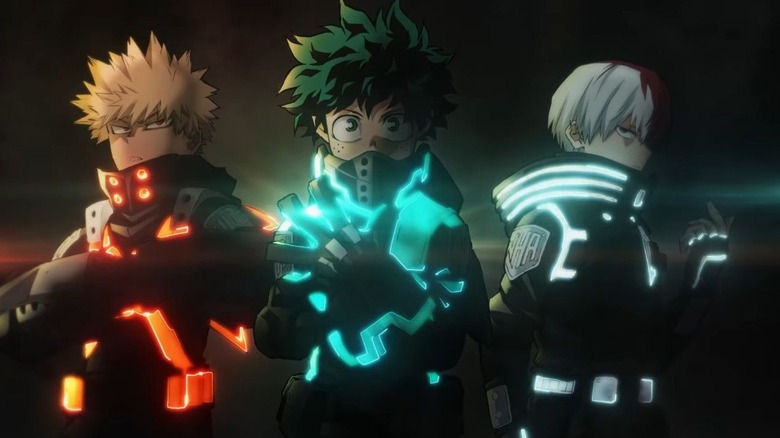 Jeramey, what are challenges when translating the Japanese script for the film and the franchise in general?

Kraatz: The beautiful thing about this franchise is that everyone is so passionate about it. We love it, We know what it means to other people. It's sorta difficult with new characters [not originated from the manga]. So, if after a session Colleen, our director is like, "hey, Ryan talks faster than he needs so can we pad out his lines? Sarah is doing this weird growl on her voice so I don't think you should do the growl. Lisa can't say the word Midoriya so cut that line," we have to take that into consideration. We go in and tweak things to make it the best product it can be.

Did you read the "My Hero Academia" manga? Do you read the manga before you do your anime voice work in general?

Roach: It depends on the series. Sometimes I read ahead, sometimes I won't. For "My Hero Academia" I haven't read ahead where the anime is. But it helps in getting context for your characters.

Levy: Usually no, mostly because of time unless you've already been a fan of the series. By the time you find out you're cast, you're gonna start recording soon. Once you find out who you are, you do as much research as possible. As much as we're all fans of this stuff sometimes it's hard to. I have a list of anime to watch on a backlog.

To Kraatz, what are challenges when reading interpretations of Japanese?

Kraatz: We have an amazing translation team I rely on heavily. We read the manga to get as much context as possible going into [the show]. You have to be a voice actor, a writer, and a problem solver because you run into jokes in anime like when someone has read the "congee" in someone's name and everyone is laughing on screen. It's funny if you know Japanese. But it's a five-second joke. But to convey that joke to get an American audience laughing, you have to teach them how congee works. You do have to get a joke in there. It's creative problem solving. You don't want to step too far away from the spirit of the Japanese and you do have to get a joke in there that makes sense. That's the moving Tetris piece of scripting to make the voice acting sound natural and make sense for an American audience who isn't used to Japanese customs and culture.

As someone who shares screentime with Deku, you have lots of lines, Ryan. Did you ad-lib any?

Kraatz: I love it when the actor does the perfect ad-lib. Someone might come up to me and say, this is a great line. Then I'm like, "Thank you, I'm sure I wrote it."

Are you going to see it in the theater in-person or home?

Levy: We're definitely seeing it in the theater.

"My Hero Academia: World Heroes' Mission" will have its US premiere on October 29, in English-subtitled Japanese and an English dub.

Read this next: The Best Animated Film Of Each Decade

The post A Conversation With the Voices of My Hero Academia: World Heroes' Mission [Interview] appeared first on /Film.