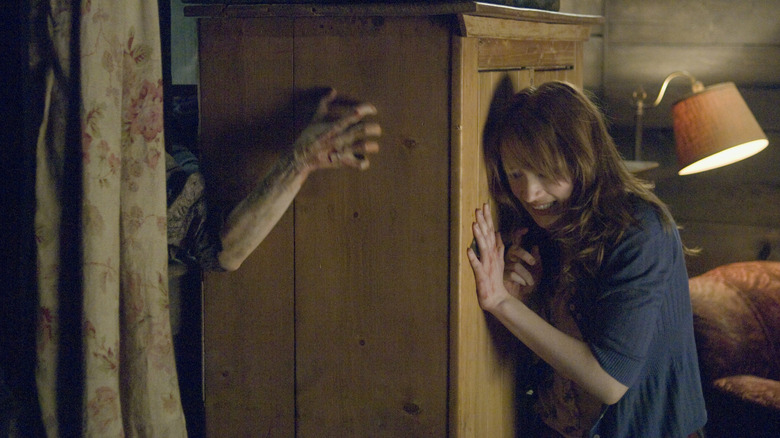 Surviving a horror movie is easier than it seems. Most found footage disasters like "The Blair Witch Project" and "Grave Encounters" can be circumvented just by choosing not to visit locales known as Very Bad Places. Ordinary moviegoers don't need to worry about Cenobites in the "Hellraiser" universe; as long as they resist the temptation to open Lemarchand's puzzle box, the sweet, sweet suffering the Priest brings will be reserved only for those searching to expand the limits of their pain kink.

Still, more horror movie curses can be mitigated. "It Follows" relieves its victims if they pass their curse onto a new sexual partner, while Kevin Ko's 2022 South Korean horror "Incantation" diffuses its evil burden by encouraging others to repeat a fictional Tibetan chant. Sadako's cursed rage-projected tape in "Ringu" just needs to be copied and shown to someone else within the seven-day deadline. Others still rely on ignorance. If the Amityville house sends flies and voices telling its occupants to leave, most will exit stage left immediately. You almost have to make an effort to find yourself in a true horror movie situation, but if you do, you'd better hope that it's not one of these hair-raising scenarios.

The following list details some of the hardest-to-survive horror movies. Reasons for their inclusion range from complex sacrifice systems to man's demonstrable inability to address a global crisis. One creature feature on the list isn't even anyone's fault, really — can't blame humans for a lack of night-vision capabilities. These movies may or may not produce a survivor by the time the end credits roll, but that doesn't mean that any Tom, Dick, or Harry can saunter through their darkened corners and live to tell about it. 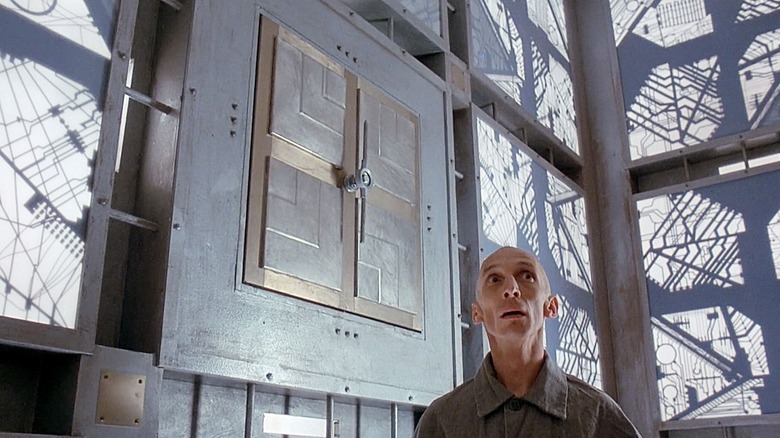 The movie has already made a /Film list of insurmountable psychological horror films alongside "Gerald's Game" and "Session 9," due to the fact that all actions in the Cube are futile unless one has "the expertise of several skilled professionals," including a stout knowledge of Cartesian coordinates and prime number factorization. Vincenzo Natali's cerebral sci-fi thriller turns economy into abstract terror by setting the entire story within a single, compact location: an industrial 15-foot room, one of hundreds that shuffle like Rubik's Cube squares with no discernible architect or controller.

The story goes that a group of strangers awaken in the mechanical structure with no recollection of how they got there, and the only clues they have are sets of numbers engraved at the entrance to each cubed room. Enter the wrong room and you may get a nasty greeting as Julian Richings did in the film's opening scene. Richings' character woke up alone in his cube and likely didn't know the mathletics needed to determine that the adjacent room he hopped into would dice him like a fleshy little onion. Other booby traps include flamethrowers, and in the sequel, stabby protruding crystal columns, so it really pays off to double-check the arithmetic before relocating.

An absence of food and water in the cubes adds a sense of urgency to all escape attempts. Those who opt to wait for help won't get far, but maybe that's preferable to a face full of acid. "Cube" puts its victims between a rock and a hard place; doing nothing equals death, but you better know what you're doing before doing anything else. 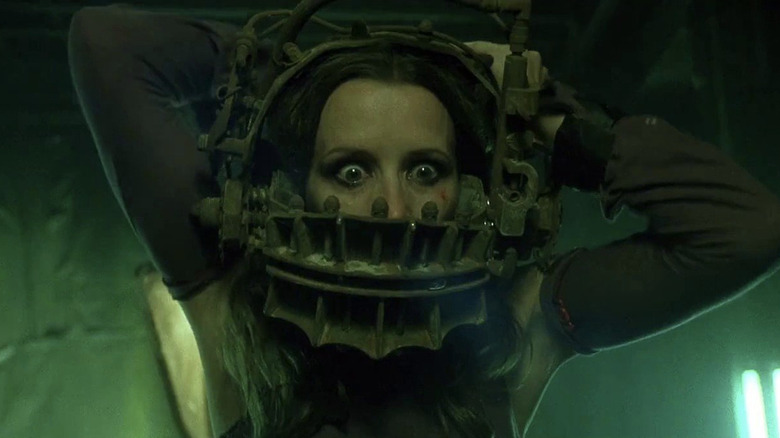 This list of impossible-to-survive horror movies would be incomplete without a nod to the movies that helped crystallize the term "torture porn." Conceived by Australian director James Wan and co-writer Leigh Whannell as "two guys in a room," the story would take shape with the added elements of a gun, a tape player, and a corpse lying on the floor between the two guys, leading up to the short film "Saw" in 2003 and a feature-length version a year later. A taut mystery-thriller that only had a brief torture segment in its original script as opposed to the festival of pain present in later entries, "Saw" enjoyed massive success upon release and spawned eight more sequels, prequels, and spin-offs for the bloodthirsty masses.

Among those franchise entries, the Jigsaw Killer (a role assumed by multiple people throughout the films) subjects victims to life-or-death situations that require Herculean efforts to overcome. Jigsaw gives the "two guys" of the first "Saw" handsaws to escape from their shackles. In another place and time, a contraption will split a woman's jaw open if she doesn't dig its key out of the guts of a paralyzed man beside her. As Amanda Young (Shawnee Smith) proves in the first film, it is possible to emerge alive from these traps, but the franchise also features several time-sensitive dilemmas that no one could conceivably beat. Among these are a key hidden in a pit of used hypodermic needles, and in "Saw 3D," a safe combination engraved onto a victim's wisdom teeth, which he must extract himself one by one before the timer runs out.

Too many of the "Saw" traps have no way to safely escape while following Jigsaw's rules, and those that do require near-superhuman grit and effort. 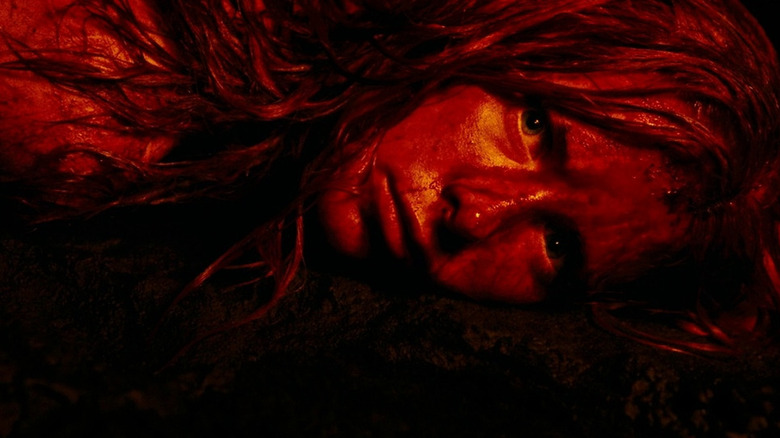 The average person is, at the very least, uneasy about the dark. As Stephen King puts it in his non-fiction "Danse Macabre" book, "the dark, it goes almost without saying, provides the basis for our most primordial fears." Fear of the unknown is one thing, but "The Descent" makes it clear that knowing what's in the dark doesn't do anyone any favors, either.

Neil Marshall's 2005 shriek-fest follows a sextet of women who go spelunking deep in the Appalachian Mountains of North Carolina. As the horror movie algorithm dictates, the women are quickly cut off from civilization when an entrance collapses. Then one of the more zealous adventurers among them admits that she led them into an unknown cave system instead of the well-trodden caves they had originally plotted out, so a timely rescue is not in the cards. With nowhere to go but further down, the group advances beyond the reaches of natural daylight (and seemingly, the secular world), where dying headlamps, glowsticks, and Zippo lighters provide just enough illumination to make everything super-scary. The explorers soon discover that they've walked into the wrong room, stumbling onto a feral horde of subterranean humanoids known as "crawlers." These creatures are vampiric Bad News Bears, taking a bite out of one woman's throat like a Honey Bun and launching the women into a panic.

The disadvantages are plentiful, as the crawlers not only know the peaks and pits of the underground terrain, but are further blessed with super speed, wall-scaling capabilities, and the ability to echolocate, which makes every sound a potentially deadly one for trespassers. Humans, on the whole, are too loud and clumsy to weather even a brief run-in with the crawlers, making "The Descent" one of the most formidable creature-feature situations of all time. 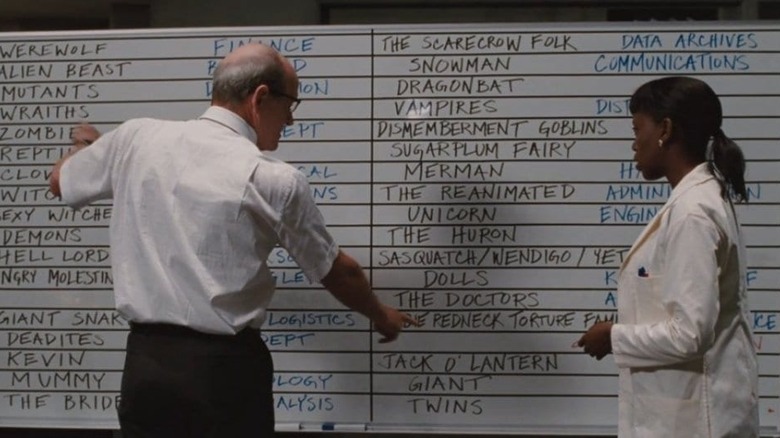 Tired of the formulaic approach they saw in contemporary horror movies, Joss Whedon and "Cloverfield" screenwriter Drew Goddard decided to follow tried-and-true creative advice and write the movie they wanted to see. The result is Goddard's "The Cabin in the Woods," a grim horror-comedy that expands from teen thrillfest to cosmic mayhem with buckets of blood in between.

Fully self-aware for the length of its crisp 95-minute runtime, the story follows a textbook example of slasher movie canon fodder: the American college students who arrive at the titular cabin include a meek virgin, a towering athlete and his sexually adventurous girlfriend, a brainy scholar, and a bong-ripping fool. There, they unintentionally summon a family of zombies, but that's not the rub. After the group is decimated, the survivors realize that the entire incident was monitored and controlled by a shadowy organization working in tandem with others around the world, all armed with a compelling reason to sacrifice humans every year. The student sacrifices must willingly follow an algorithm familiar to scary movie fans: ignore the warnings of the harbinger, engage in sex and drug use, the "whore" archetype must die first, the virgin last, etc.

A Murderers' Row of movie monsters await their time to shine, from vampires and witches to mutants and some vaguely sinister threat only known as "Kevin." Their victims aren't just any lambs for the slaughter, either. Though it seems like they have full agency, their deaths are sanctioned and structured by an entire committee of lab-coated technicians who have influence over these kids' emotions, movements, and even their libidos. Dropped into the same situation, the average joe's survival is a statistical improbability — unless, per the rules, they fit the virgin archetype. But if the virgin fails, everyone dies.

Invasion Of The Body Snatchers (1978) 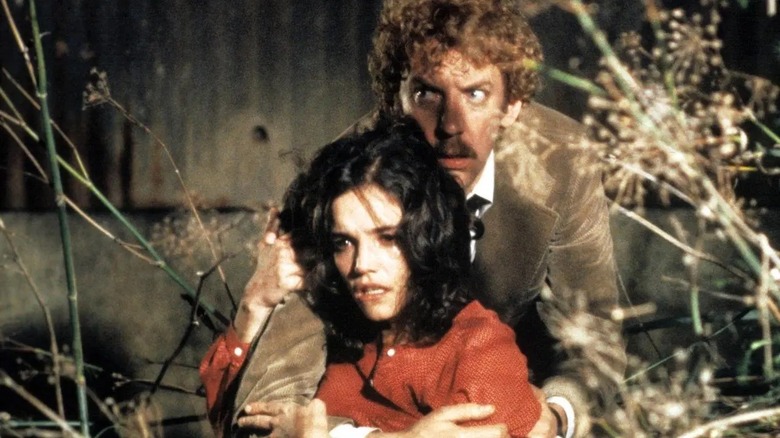 The oldest entry on this list is also one of the most culturally influential, responsible for the infiltration of the term "pod people" into the pop culture consciousness. The story originally emerged in Collier's Magazine in 1954 as a serialized sci-fi novel written by Jack Finney, titled "The Body Snatchers." Viewed as either a stern response to McCarthyism or a vigorous allegory of hyper-conformity depending on who you ask, "Invasion of the Body Snatchers" concerns an alien invasion of Earth via seeded pods that can produce human mimics.

The bleak tale first got a big-screen adaptation in 1956 with "Hell is for Heroes" director Don Siegel at the helm, but the superior 1978 version of the story is a considerable improvement across the board, with director Philip Kaufman moving the setting from the fictional southern Californian town of Santa Mira to the highly progressive city of San Francisco. Donald Sutherland stars as a health inspector, just the right person to catch a bio-invasion in progress, who rings alarm bells to anyone who will listen (few listen).

Anyone who has dealt with the bureaucratic hellscape of the American government or anyone who has been alive in the past two years can testify that aliens don't even need to go all "War of the Worlds" to pull off an invasion — the little green men could defeat the human race with minimal effort. Half of the human population would insist that there are no pod people and demand that Applebee's stay open for them during the global crisis, while the other half would send some sternly-worded tweets and wait until November to vote on a potential response. If the aliens come, humans are donezo.

Read this next: The Saddest Character Deaths In Horror History