4 things we want to fix about 'Stranger Things 4' 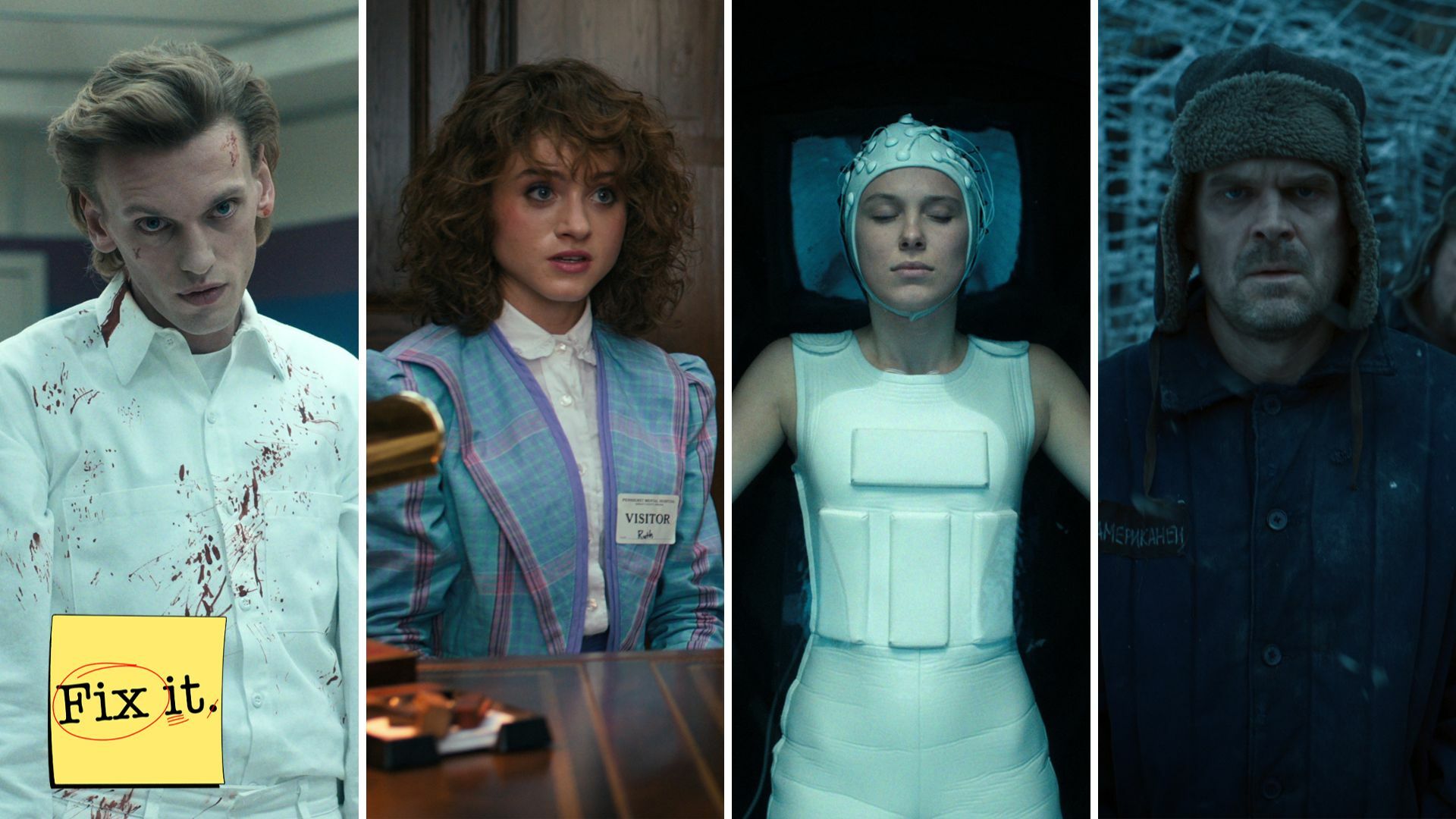 Welcome to Fix It, our series examining projects we love — save for one tiny change we wish we could make.

The first part of Stranger Things 4 rules, but it certainly isn't without its faults. For every moment that reaches "Running Up That Hill" levels of awesome, there's a plodding California scene. For every genuinely threatening Vecna appearance, there's a trip to Russia that brings the storyline to a screeching halt.

In short, there's a lot that could be fixed. Normally, Mashable's "Fix It" series focuses on one fixable element per project. But since this is a super-sized season of Stranger Things, with episodes all clocking in at over an hour long, we're going to do a super-sized "Fix It."

Here are four things we'd fix about Stranger Things 4, from our most general complaints to one extremely nitpicky (but important!) detail.

1. Eleven's and Hopper's stories should have been bottle episodes

This could have been an e-mail (or a bottle episode). Credit: Courtesy of Netflix

Stranger Things has a complicated relationship with isolated bottle episodes. The seventh episode of Stranger Things 2, "The Lost Sister," focused entirely on Eleven (Millie Bobby Brown). Viewers did not enjoy the change in pace, or the fact that "The Lost Sister" came right on the tail end of a gnarly cliffhanger. Vox's Emily St. James even posits that the hate for this episode "broke Netflix" and led to the streaming service taking fewer risks with its binge model. But boy oh boy, would a risky bottle episode — or two — have paid off in Stranger Things 4.

Here's the thing: The Hawkins plotline is easily the most interesting of the season, so whenever we cut away from it to slog through Hopper's (David Harbour) prison time or Eleven's memories, the story's momentum deflates. What if, instead of taking several episodes to drag out these more isolated storylines, Stranger Things 4 devoted one episode to each? We'd get a tight prison thriller with Hopper's story, and then an intriguing psychological journey with Eleven's. Sure, it could be polarizing to pull this move again, but Hopper and Eleven are both fan favorites. Spending time with just them would have given their stories more room to breathe, as opposed to sandwiching them between the faster-paced Hawkins scenes and hoping for the best.

SEE ALSO: 'Stranger Things' is almost back, so here's your reminder that Hopper should have stayed dead

2. Nancy is more than just a love interest 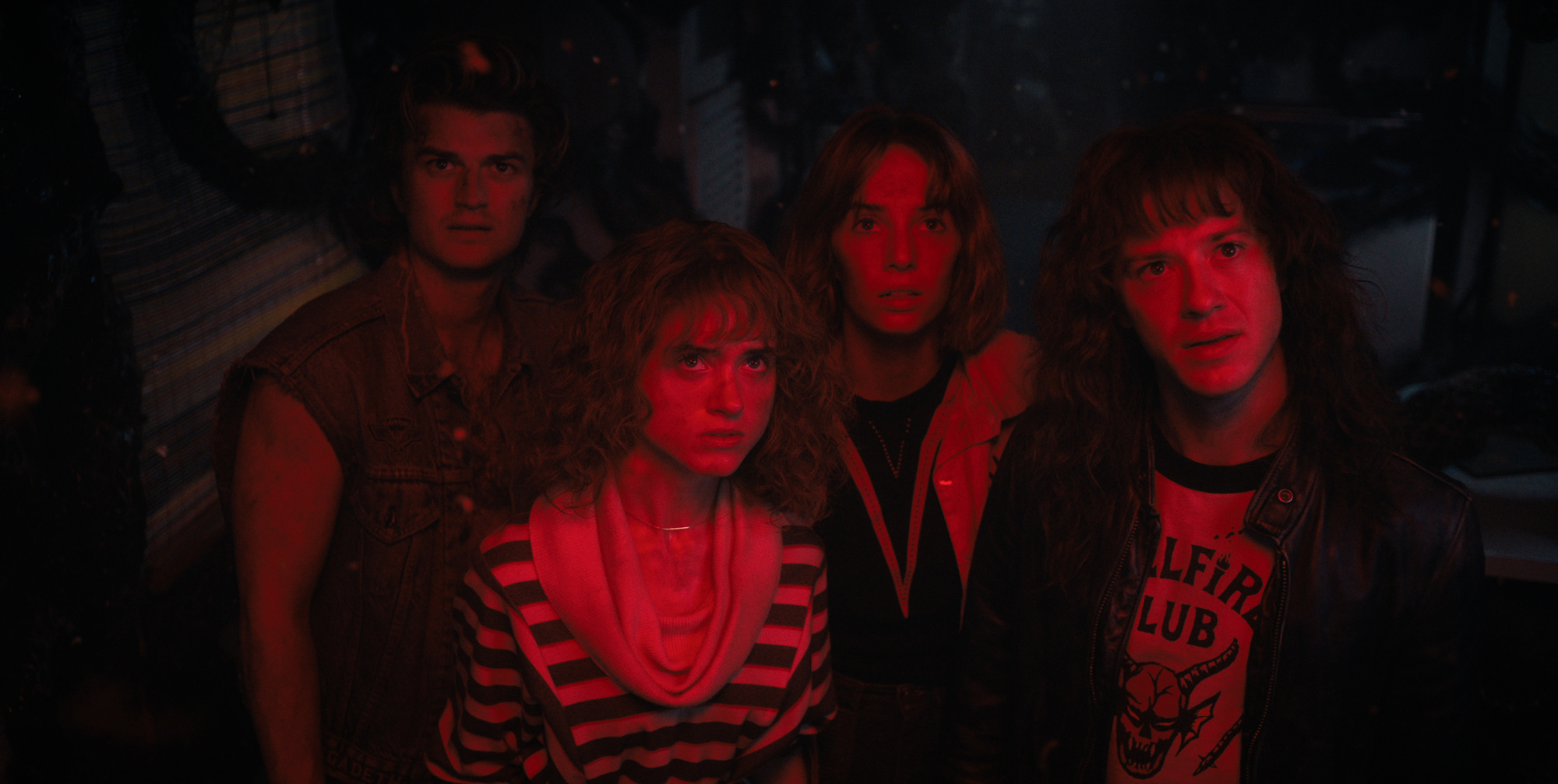 I love Nancy, I love Steve, but I don't love them together. Credit: Courtesy of Netflix

My position on the "Jancy" vs. "Stancy" ship wars can be summarized in one word: ENOUGH. Over the past four seasons, Nancy (Natalia Dyer), Steve (Joe Keery), and Jonathan (Charlie Heaton) have been developed to the point that their love lives are the least interesting thing about them. So why are we revisiting this love triangle yet again?

Nancy definitely suffers the most here. She's trying to have her girlboss journalism moment, but all people keep talking to her about are her relationships with Jonathan or Steve. Newsflash: Jonathan and Nancy's lives are going in different directions! It's totally understandable if they break up. In fact, they probably should. And just because Steve has grown as a character doesn't mean Nancy needs to fling herself back into his arms. I promise that friendship between two exes can be just as compelling as watching two exes randomly get back together, if not even more so. Just let Nancy do her own thing for a bit. (Plus, all the relationship stuff pads the already too-long runtime, so this would be an easy fix.)

Things that rule? This scene. Things that don't rule? Too much lore. Credit: Courtesy of Netflix

Adjacent to the the problem of needing to bottleneck a few of the 116 overstuffed plotlines of the season so far, it’s starting to feel like the show lost the plot of why we loved it in the first place.

As Mashable critic Jess Joho pointed out in our review of Season 4 Volume 1, “Stranger Things’ co-creators, the Duffer brothers, have repeatedly been positioning Season 4 as their 'Game of Thrones season' to describe their attempt at the HBO hit’s expansiveness… But it reveals a fundamental misunderstanding of their own show’s appeal.

Unlike the HBO show based on a fantasy book series notorious for its massively in-depth lore and world-building, the Stranger Things universe just isn’t that deep; it's far too ill-equipped to handle this sheer volume of Things. Sure, this is the show’s most sprawled-out narrative yet, with three to four main character groupings divided into separate plotlines spread across at least three distinct locations… But honestly, who watches this stylistic trip down '80s memory lane out of a desire for yet another massive extended universe of IP with a puzzle-box mystery narrative engine fueled by online fan theories?

Actually, if you can remember back to 2016, Stranger Things stood out precisely because it was a return to simpler times for mainstream entertainment — a wholesale rejection of the Game of Thrones and Marvel-ification of everything. We cherish the show because of the unique intimacy of Hawkins’ self-contained world, and a story centered on your average everyday small-town childhood friend group somehow overcoming a mysterious interdimensional threat through the kid-brain logic of a fantasy board game.” —Jess Joho, Culture Reporter

OK, so this is the smallest, most meta of nitpicks, but hear me out! After the Stranger Things opening credits play in episode 1, we're hit with the credit: "Also starring: Jamie Campbell Bower." Me being me — someone who spent middle school reading The Mortal Instruments books and preparing for the film adaptation starring Bower — I immediately began to keep an eye out for him. But he didn't show up until one of Eleven's memories in episode 6.

I spent much of the first five episodes wondering when the heck his character — first announced as "Peter Ballard," later credited as "Friendly Orderly" — would show up. During that time, I realized that we may have already seen him. Maybe he was simply unrecognizable as Vecna. After developing that theory, I knew as soon as we met the "Friendly Orderly" in Eleven's memories that he would become Vecna, and that he would massacre the children in Hawkins Lab. Did I know all the specifics? Definitely not. I freely admit that the Creel reveal got me. But was the surprise of the villain's true identity dampened? You bet.

Again, this is a super nitpicky critique, and Bower deserves to be credited prominently given that he's playing the main antagonist, but we're talking about Stranger Things here. This show invites fan theories and close inspection unlike almost any other, so you better believe I'm going to theorize about and inspect everything — even the credits. And if those credits even remotely hint at the Big Bad of the season, there's a high chance people will figure the twist out far in advance. Stranger things have happened.